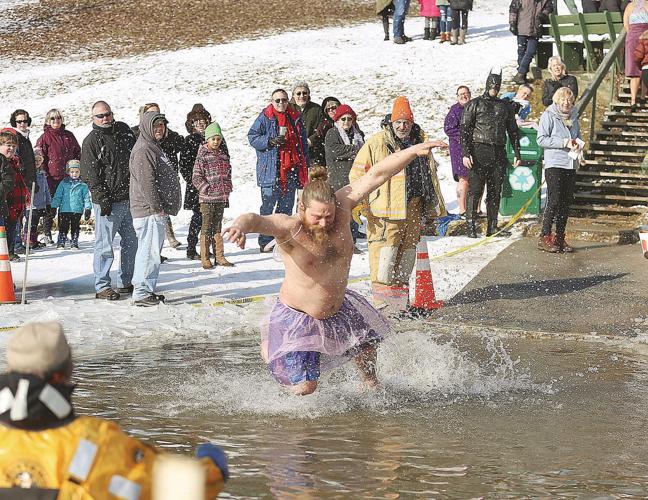 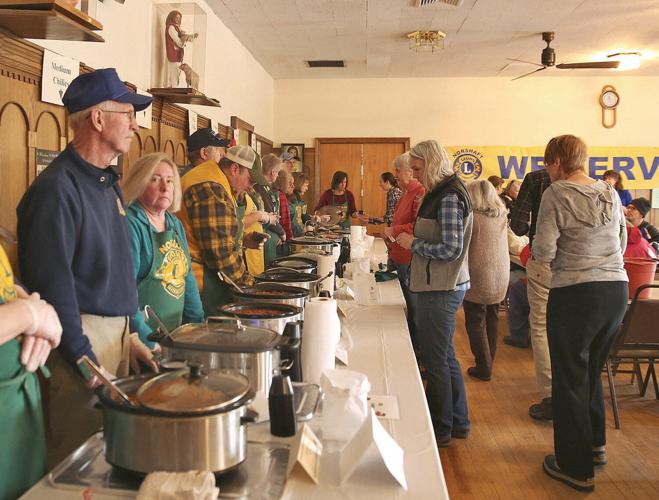 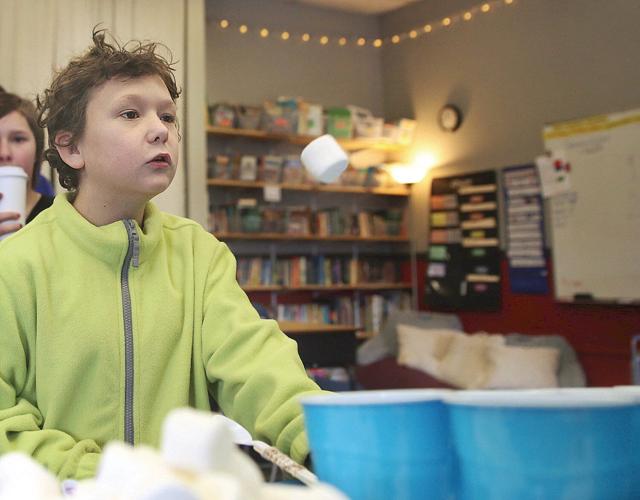 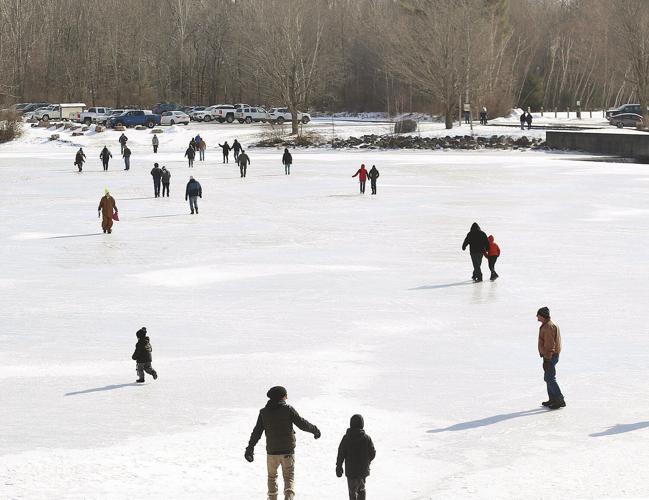 People walk and skate across the ice on Lake Paran during Winterfest, held all over North Bennington on Saturday afternoon. 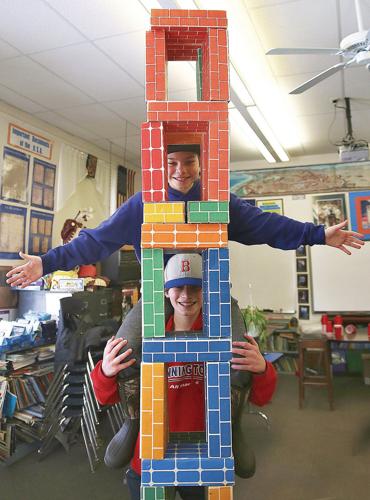 Sawyer Crosier, 11, of North Bennington, gets some assistance from his brother Mason, 13, as they build a colossal tower of blocks during the annual winter carnival held as part of the Winterfest event Saturday in North Bennington. The Crosier boys were also the first ones into the water during the Lake Paran Plunge. 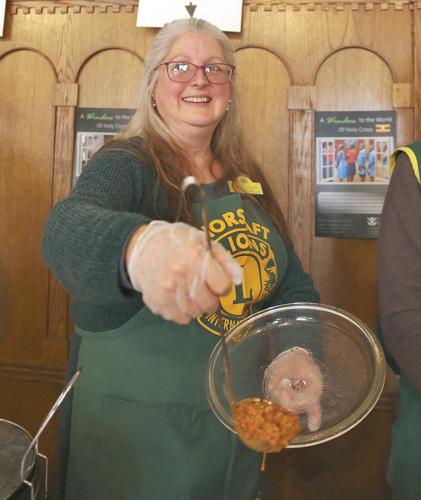 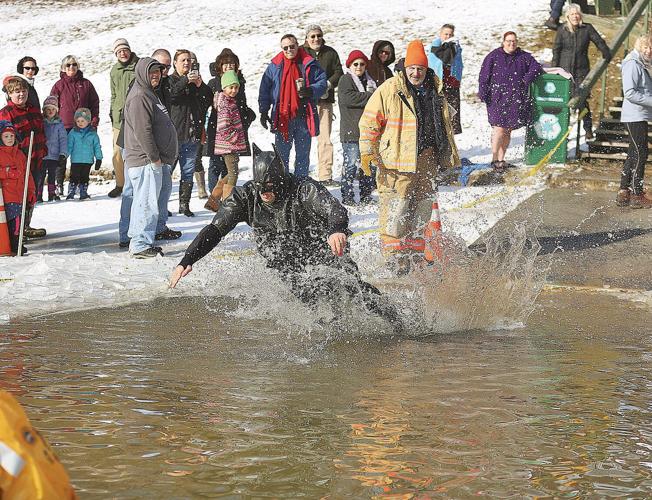 Batman, aka Jesse Bessette, takes a leap into the ice-cold waters of Lake Paran on Saturday during the Penguin Plunge at the North Bennington Winterfest event.

People walk and skate across the ice on Lake Paran during Winterfest, held all over North Bennington on Saturday afternoon.

Sawyer Crosier, 11, of North Bennington, gets some assistance from his brother Mason, 13, as they build a colossal tower of blocks during the annual winter carnival held as part of the Winterfest event Saturday in North Bennington. The Crosier boys were also the first ones into the water during the Lake Paran Plunge.

Batman, aka Jesse Bessette, takes a leap into the ice-cold waters of Lake Paran on Saturday during the Penguin Plunge at the North Bennington Winterfest event.

He did it twice.

As part of the Village School Team, Crosier and his brother Mason were the first participants in the 2019 North Bennington Winterfest's Lake Paran Plunge, where a number of brave team members and individuals dived into a frigid patch of the lake cleared of ice.

Crosier was delighted to make a second jump into the water — after waiting around in the snow for a little bit, he said — but still he wants to take it further next time.

"We are Lake Paran," Del Tufo said with a smile.

The cold didn't faze Ford and Del Tufo, who participated in the plunge for the third year in a row. The first year they did it, they even came back later in the day to do it again.

There's a fee to participate in the Lake Paran Plunge, also known as the Penguin Plunge, and participants are asked to get sponsors. Proceeds from the event benefit various local organizations and places, like Lake Paran, which will use some of the funds to help build a new playground this summer.

Lindy Lynch, one of the event's main organizers, was thrilled with this year's turnout.

"This was even better than last year," Lynch said. "There are a lot more spectators. We're growing!"

Most importantly, she said, the higher turnout means more money for Lake Paran and other local organizations.

The event could not have been made possible without the help from various volunteers and the local fire department, she added.

"[Winterfest] is one of my favorite events because everyone is involved," she said. "It's a great North Bennington collective community event."

After about 15 minutes, the plunge was over. Chilly swimmers bundled in towels hustled to a heated pavilion to warm up before checking out the rest of what Winterfest had to offer.

While the brave souls dove into the icy water, nearly 50 volunteers were hard at work at the St. John the Baptist Church in North Bennington, preparing to dish out an extensive variety of piping hot chili samples. By the time the plunge ended, the chili was ready to warm up swimmers and bundled eventgoers alike.

Volunteers served up 32 different chilis; ranging from hot, medium, and mild versions of beef chili, to vegetarian options like "Vivacious Veggie" and even "Lion Ryan's Love Sick Moose" for the adventurous palate. All of the chilis were made by Lions volunteers, and the money raised from the $6 per-person donation to sample five chilis goes to the NorShaft Lions school scholarship fund, said Lions co-chair Phylis Porio, who along with Lions chair Arla Sampsell helped run the event in its eleventh year.

"We generally have around 230 people come, and lots of people from the Plunge," Porio said as a steady stream of hungry chili lovers entered through the church doors, surveying their options.

"We're happy to be part of Winterfest," Porio said. "We love being here."

Of course, Winterfest isn't complete without The Village School of North Bennington's Winter Carnival. The indoor carnival featured fun and educational games for kids of all ages, tasty warm food from the Hound Dogs Food Truck, face painting, a video game tournament, and even a bouncy house in the gym.

After purchasing carnival tickets — which benefit the school directly — parents and their children were welcome to traverse the halls of the school, seeking out the most fun activities.

The catapults were made by students from popsicle sticks, rubber bands, and a plastic spoon during class time, Strubel said. The objective was to fling the marshmallow into one of nearly a dozen blue Solo cups attached to a trifold display board painted with winter scenes.

North Bennington was alive the whole day as attendees from near and far strolled the streets, looking for the next activity. The Park McCullough House hosted snowman building and a fire pit for s'mores for much of the afternoon, and local eateries like Pangaea, Powers Market, North Bennington Variety, and Kevin's Sports Pub served up Winterfest specialties. Wagon rides around transported attendees from restaurant to restaurant, activity to activity.

For those who wanted to take advantage of the sunny winter day outdoors, Taraden offered pony rides and RiseVT led a community snowshoe hike at the Mile Around Woods before Winterfest wound down around 4 p.m.