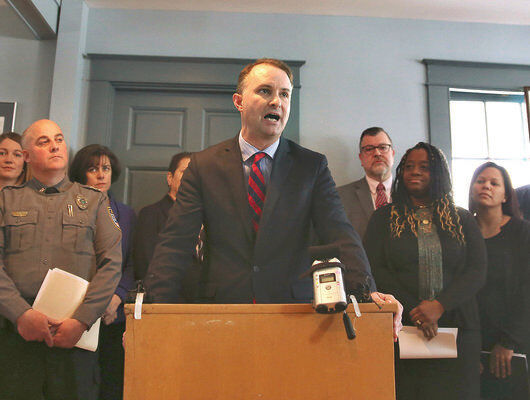 Vermont Attorney General T.J. Donovan talks about his office's findings in the investigation of racially-motivated harassment reported by former state Rep. Kiah Morris during a press conference Monday in Bennington. 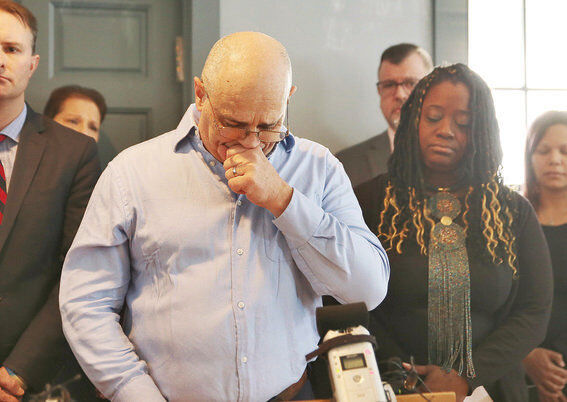 James Lawton, the husband of Kiah Morris, holds back tears as he reads some of the racial harassment she has suffered while serving Bennington in the Vermont House. 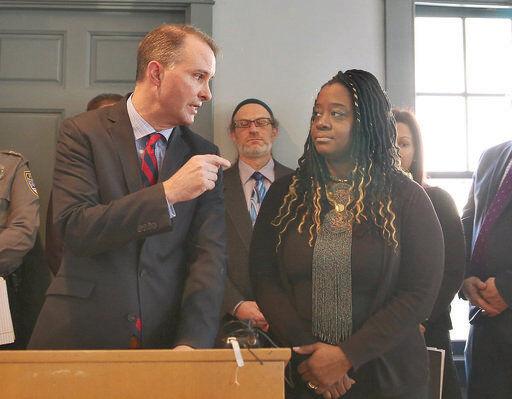 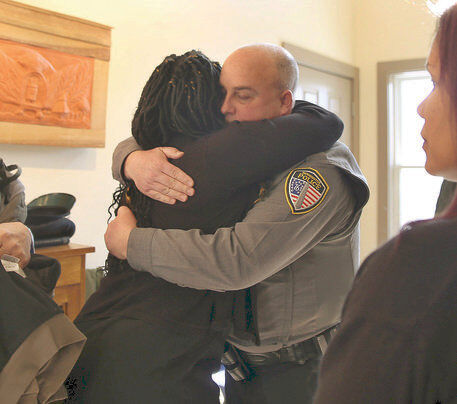 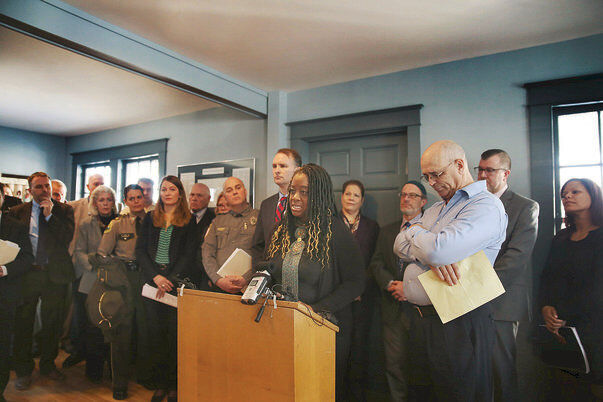 Vermont Attorney General T.J. Donovan talks about his office's findings in the investigation of racially-motivated harassment reported by former state Rep. Kiah Morris during a press conference Monday in Bennington.

James Lawton, the husband of Kiah Morris, holds back tears as he reads some of the racial harassment she has suffered while serving Bennington in the Vermont House.

BENNINGTON — A report on racially motivated harassment of former state Rep. Kiah Morris issued Monday by Attorney General T.J. Donovan found incidents of harassment but nothing that met the threshold of a criminal offense under current state law.

The report was released during a packed news conference that featured strong emotion, calls for renewed efforts to overcome racism, disruptive behavior, jeers, shouting and singing.

About 100 members of the media, public officials and area residents attended.

In general, the investigation conducted by Vermont State Police and computer forensic personnel concluded that "Kiah Morris was a victim of racial harassment," Donovan said.

But the report did not find that there was sufficient evidence of criminal behavior. That also was the conclusion of local police and Bennington County State's Attorney Erica Marthage during two sets of harassment complaints from Morris — both roughly corresponding to the election seasons in 2016 and 2018.

Citing ongoing harassment, threats and the fact her husband, James Lawton, would soon undergo heart surgery, Morris resigned her Bennington 2-2 House seat in September, after earlier abandoning her campaign for a third term on Aug. 24.

Joining Donovan Monday at the Congregation Beth El social hall in Bennington were Morris, her husband and numerous supporters; legislative leaders and local lawmakers; representatives of the ACLU and NAACP, and Bennington Police Chief Paul Doucette, whose department Morris had criticized during interviews for failing to arrest anyone over the two years she endured online and other harassment.

During her remarks, Morris described the frustrating and emotional impacts on her and her family from online racial and other harassment over two years, leading to her decision to leave the Legislature. She set those incidents into a timeline for herself as a person of color by telling of her great-grandfather, who was severely beaten and permanently disabled prior to an infamous church burning by members of the Klu Klux Klan in 1964 in Philadelphia, Mississippi.

"This is generational trauma," she said, "one that remains forever present for those of us whose very survival is linked to these human atrocities."

"We do not forget the architects of these acts," Morris added, nor the organizations that were involved in those crimes, their symbols or their speech.

Standing "on the shoulders of my ancestors, who risked their lives" in the struggle for racial justice, Morris said the accounts of what has happened to her family over the years "are enormous in scale and historically rooted in white supremacy, misogyny and inequity."

In her own case, she said, "we did everything we were supposed to do" and "trusted in a system that in the end was insufficient."

And most others who are harassed, she added, are not members of the Legislature and have far less access to protection from the effects of racism.

Lawton, his voice halting at times with emotion, read a list of the online messages Morris had received, including, "thanks for resigning, now please leave my state;" "the only place you're going to be safe is Africa;" "better to heed the warnings than be eliminated," and "she is trying to promote white genocide in Vermont."

Also attending were some local critics of Morris, including Kevin Hoyt, former Republican House candidate in the Bennington 2-1 District, who said she has falsely exaggerated an image of Bennington and Vermont as racist in interviews with regional and national media.

"I call bull---- on Ms. Morris," he said at one point, drawing boos and shouted comments from many in the crowd.

Hoyt has maintained that he was himself discriminated against when unfairly labeled a Nazi after criticizing Morris over gun control issues, and said he was the target of a written death threat during his campaign.

And Max Misch, who posted a vulgar racist cartoon and message aimed at Morris on Twitter in 2016 and has admitted to being a racist and to "trolling" her online and at public events, entered the hall toward the end of the news conference. This prompted jeers, and shouts of "No, no — out!" as Misch walked toward those standing at the podium, apparently to make a statement.

Misch was blocked by several people in attendance, who soon began holding up their coats to block out a T-shirt he wore with a cartoon adopted as a symbol of the alt-right on the front.

Several began loudly singing "We Shall Overcome," and other songs, apparently to drown out any statement.

State and local police, who were prominent throughout the conference, stood near Misch and helped to calm the situation until he left the building.

The overriding sentiment expressed by Donovan and others was of the need to learn from what happened to Morris and come together in the future to ensure people of color and other minorities are supported, and that laws and police policies regarding hate speech and bias are examined for possible revisions.

Sen. Dick Sears, D-Bennington, chairman of the Senate Judiciary Committee, said the committee is scheduled to meet Friday with Donovan and others to discuss legislative approaches, among other issues.

Donovan's office also detailed plans for a Bias Incident Reporting program, which will compile a record of complaints to local police or other agencies around Vermont. The program also will share information with police departments and with the public concerning such issues as what constitutes criminal behavior and what civil enforcement options are available for victims.

Donovan added that his office is planning a series of public forums across Vermont to discuss the program and to address these issues and how they relate to free speech rights. The first session is planned for next month in Bennington.

The AG called on all Vermonters to "work together as a state to call out hate, bring these incidents to light, and support people of color."

Speaking after the news conference, the attorney general said there also will be consideration of new policies involving the submission of online harassment complaints to the VSP computer unit, which is something most municipal police departments, including Bennington's, lack.

Donovan said the BPD conducted its investigations "the way many others in the state would," in the absence of computer forensic personnel. "It is important now that we move forward and work together on this," the AG said. "I feel good about it; I feel there is momentum."

Doucette also cited a need to review response policies. "There needs to be a protocol," he said, adding that there are police protocols for drug investigations and other crimes.

"So this is a learning experience for all of that," the chief said. "It is time to move forward and to have everyone feel safe living in Vermont."

He said he concurred with the findings in the AG report and appreciated the effort that went into it.

Among the findings, Doucette noted, were that the words "DEAD DEAD," which appeared on a computer screen amid ongoing harassment of Morris, and was taken by her as a threat, was determined in October to have been written by a young boy whose family apparently once owned the computer.

The device had been purchased used, Donovan said, and the wording that came up on the screen was not intended as a threat to Lawton, Morris or other parties. But he said he understood Morris' reaction to the words.

Town Manager Stuart Hurd said in a statement that he thought the investigation report showed the Bennington department had followed "all proper protocols in the investigations of the numerous allegations made by Ms. Morris and Mr. Lawton. The department acted professionally and effectively in all matters involving this case."

He added, "Bennington is not a racist community. The Bennington Police Department is not a racist organization, nor are the individual members of the department. We understand how upsetting the racist remarks Kiah and her family received can be. Such remarks have no place in a civilized society. Unfortunately, the broad brush condemnation this generated placed our community and the police department in a very unseemly light.

"I agree with the attorney general," Hurd said. "It is time to move on, time to heal. It is time to put hate speech in the gutter where it belongs."

Sears also defended Bennington's image in his remarks, saying that while there is some racism here, it should not be forgotten that the town had elected a woman of color to the House and elected an openly gay candidate to the Senate. The area also was "recognized as the turning point" leading to passage of the state's first-in-the nation legislation allowing same-sex couples in 2000, he said.

Sen. Brian Campion, D-Bennington, said of the conference, "Today was incredibly powerful and important. I appreciated that so many people were in attendance, and I continue to be heartbroken for what Kiah and her family experienced."

Answering questions outside the building afterward, Misch said he had expected no charges would be filed after the investigation because what he and others said "was protected free speech."

Asked if his speech went too far, he said, "It might have, but it is still protected speech."

Misch said he now is concerned new laws will be passed in response to Morris' complaints that will restrict free speech rights.

As to why he began targeting Morris in comments, he said, "I like trolling people; it's fun," adding that he later learned of her policies as a legislator and was strongly opposed to them.

Misch said he is not part of a group but considers himself "pro-white and a white nationalist."

Those might include the AG seeking a civil hate crimes injunction and/or compensatory damages even without a criminal prosecution. The program also will address incidents involving race, national origin, age, religion, disability, sexual orientation and gender.