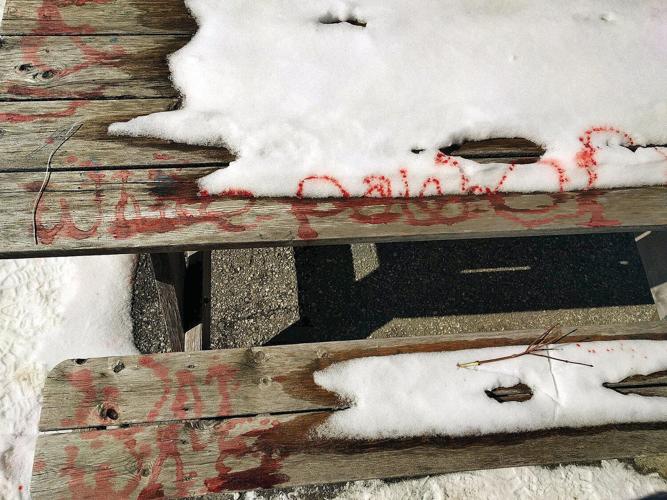 A broken cellar window in the Oldcastle Theatre Company building on Main Street was discovered Saturday morning, along with this graffiti on a nearby picnic table stating "White power." A dance and music touring group from West Africa played at the theater on Saturday evening. 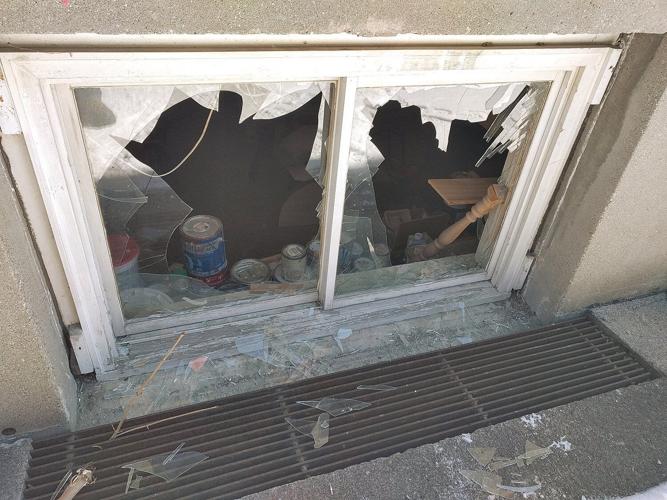 A broken cellar window in the Oldcastle Theatre Company building on Main Street was discovered Saturday morning, along with graffiti on a nearby picnic table stating "White power." Bennington Police are investigating the incident.

A broken cellar window in the Oldcastle Theatre Company building on Main Street was discovered Saturday morning, along with this graffiti on a nearby picnic table stating "White power." A dance and music touring group from West Africa played at the theater on Saturday evening.

A broken cellar window in the Oldcastle Theatre Company building on Main Street was discovered Saturday morning, along with graffiti on a nearby picnic table stating "White power." Bennington Police are investigating the incident.

BENNINGTON — Bennington police are investigating apparent vandalism or an attempted break-in at the Oldcastle Theatre Company building — along with graffiti on a nearby picnic table that proclaimed "white power."

A broken cellar window in an alleyway on the west side of the building and the graffiti writing in what appeared to be red paint — possibly dripped from a can — was discovered Saturday morning. This was several hours before a performance by Saakumu Dance Troupe, a dance and music group from Ghana, West Africa.

He and others from the theater company are in London on a tour of the city's West End theater district.

"We pride ourselves on being a theater that welcomes everyone," Peterson said. "We are proud to have presented the gloriously talented dancers. Our community deserves better than to be embarrassed and sullied by this hateful conduct. Following the abuse of [former state Rep.] Kiah Morris, this is particularly reprehensible. We apologize to the artists. We will welcome them back any time."

Morris, who resigned her seat in the Vermont House in September, citing in large part continuing racial harassment and threats over a the past two years, represented the Bennington 2-1 district in the Legislature for two terms.

Bennington Police Lt. Camillo Grande told the Banner Sunday that what appeared to be vandalism because of the broken window was reported at 11:26 a.m. on Saturday.

When local actors rehearsing for a Bennington Community Theatre production of "The Dining Room" arrived around noon, they were at first kept outside while officers searched the building, a witness said, adding that there were four cruisers and a K-9 unit at the scene.

Police also were observed examining the graffiti and the picnic table for evidence. The graffiti was subsequently washed off.

Morris declined Sunday to comment on the graffiti, but her husband, James Lawton, issued a statement saying, "This is what happens when you have several citizens supporting and even defending our local white supremacist," a reference to Max Misch, of Bennington, a self-proclaimed white supremacist who has admitted "trolling" Morris and others at times over two years on the internet and at public events.

No charges were brought against Misch after an investigation of complaints from Morris and Lawton by Bennington police, who said there was not enough evidence to bring a criminal charge.

Vermont Attorney General T.J. Donovan last year requested that the state police computer crimes unit conduct an investigation, after Morris complained that the Bennington Police Department did not seem to take their reports seriously. That investigation produced evidence of racial harassment, Donovan said in January, but also not enough evidence to bring a criminal charge, particularly in light of statutes protecting freedom of speech.

Misch was arraigned in early February in Superior Court Criminal Division on charges of unlawful possession of large capacity ammunition feeding devices. He was said to be the first state resident to face that charge under the legislation enacted last year.

After announcing the charges, Donovan also recommended that the town hire a consultant to review BPD procedures and policies in relation to the incidents involving Morris.

"This action step will promote and maintain the public trust in the Bennington Police Department," he said.

Town Manager Stuart Hurd has said he will likely recommend such a review process to the Select Board for consideration, but he also denied that the department did anything wrong during investigation of Morris' complaints.

Hurd said the BPD "cooperated fully" in the investigation and turned over all information regarding complaints from Morris and her husband to the attorney general and state police.

The BPD also worked closely with state police in the weapons-related investigation of Misch, the manager said.

BPD Chief Paul Doucette has staunchly denied that insinuation, saying the department did a thorough investigation of all the complaints.

On social media, support has been voiced locally for both Bennington police and for Morris in the wake of her resignation, with both praise and sharp criticism for the former lawmaker and for Doucette and his department.

Of the graffiti incident over the weekend, Lawton said Sunday, "We cannot pretend this didn't have anything to do with the fact that the African dancers were going to perform there. We have to stop being so naive or this will continue to get worse."