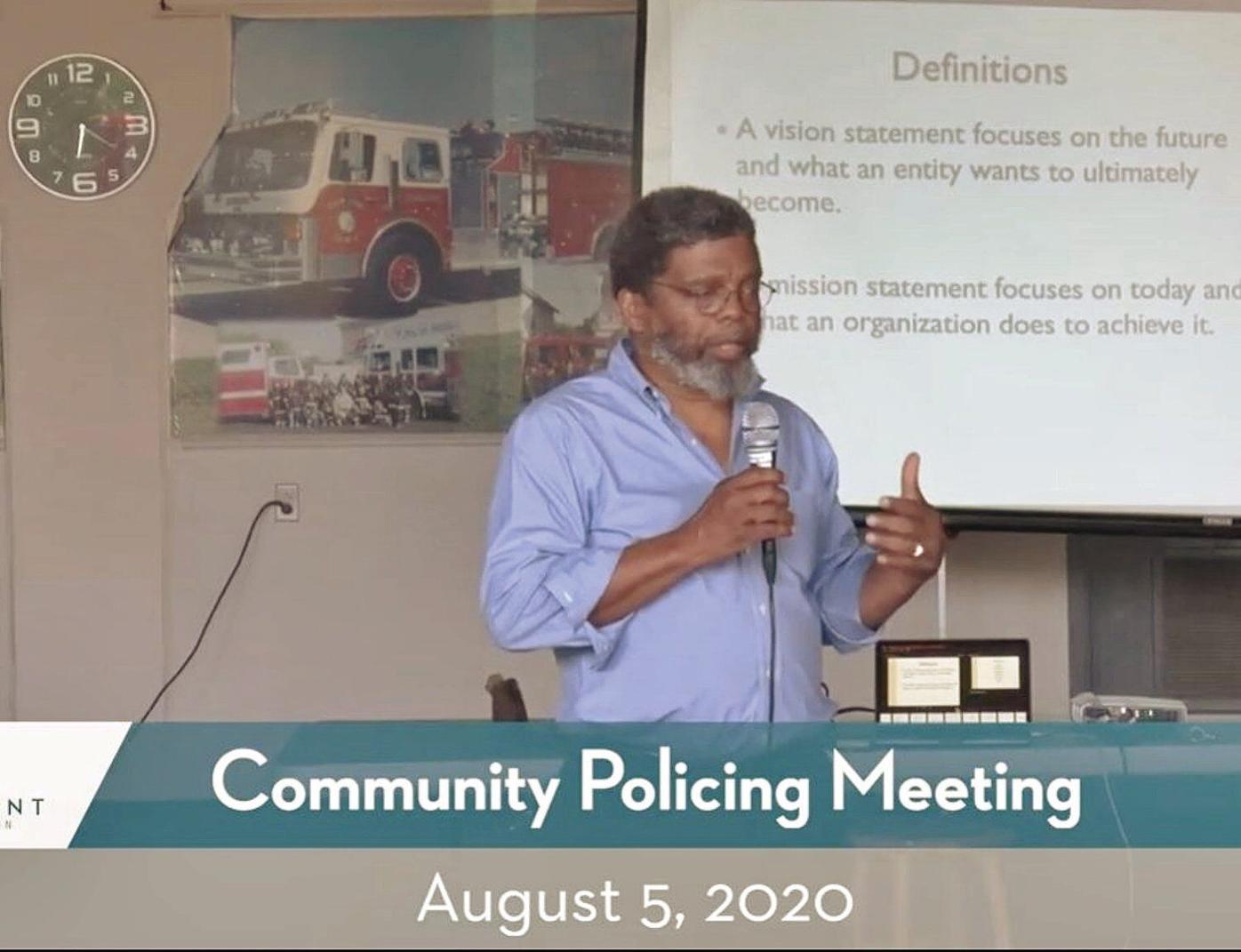 Consultant Curtiss Reed Jr. speaks during a public meeting to work on revisions to a mission statement for the Bennington Police Department and a vision statement for the town. He is working with local officials and the community to implement reform recommendations stemming from an International Association of Chiefs of Police review of the BPD. 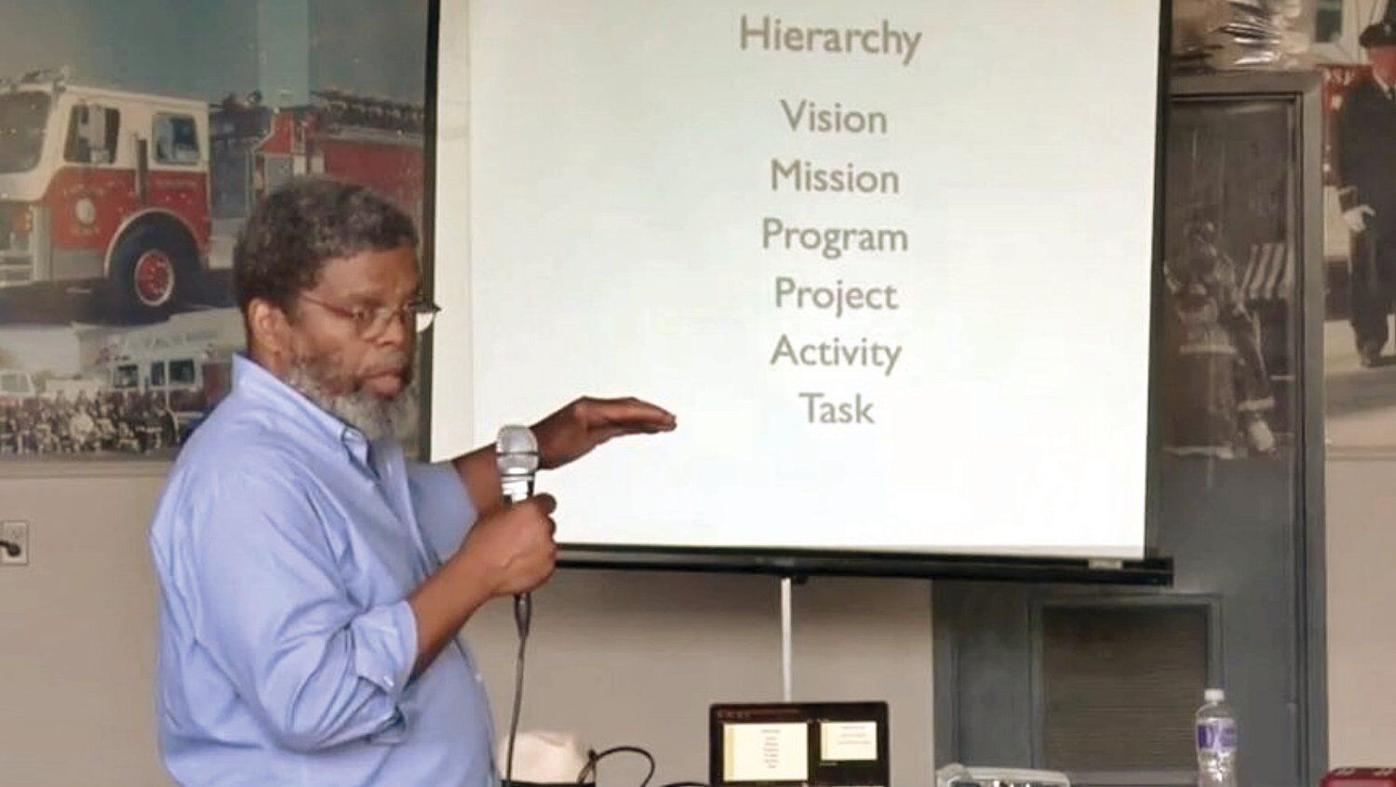 Consultant Curtiss Reed Jr. speaks during a public meeting to work on revisions to a mission statement for the Bennington Police Department and a vision statement for the town. He is working with local officials and the community to implement reform recommendations stemming from an International Association of Chiefs of Police review of the BPD.

BENNINGTON — The roadmap for considering revisions to Bennington Police Department policies is expected to be laid out over the next two weeks.

A group of local officials and residents has been working with consultant Curtiss Reed Jr., executive director of the Vermont Partnership for Fairness and Diversity, to implement BPD reform recommendations stemming from a four-month review of the department by the International Association of Chiefs of Police. The town hired the IACP to look for racial bias in the department's policies and procedures.

Six residents and local officials have been involved in research and information-gathering on best policing practice options from other communities and law enforcement resources. The result of their work will be posted next week on the town's website for residents and others to consult during the process.

Those statements are now posted on the town website, and the Select Board is expected to formally adopt the language at its next meeting.

Previously, Reed conducted workshop sessions for town staff and police supervisory officials, focusing on participants' personal experiences with race and leading a larger discussion about tackling racism and bias within the town.

"The intent is to have this be a little clearer by the next Select Board meeting, and that we will be able to announce the full process at that time," board Vice Chairwoman Jeannie Jenkins said this week.

"What we intend is to set up a seven-member policy advisory committee with three permanent members — one from the Select Board, one from the town, and one from the police department — and four community members that will change with each policy."

She said the format "will maximize the community wisdom and skills within our professional community and from community members with personal experience in each of these policy areas."

Jenkins said six residents hired to work as researchers have completed their portion of the process. The material compiled by the residents, who were divided into two teams — one researching community policing in rural areas, and the other looking into options for citizen police oversight committees — is expected to be posted Aug. 17 on the town website.

"Our hope is that we will have 24 additional individuals take part in the adoption of six different policies by the end of December," Jenkins said. "That might be overly ambitious, but it is what we are aiming to achieve."

Jenkins said a group of town staff members, police department and Select Board representatives is meeting periodically and "is doing the grunt work to determine a process that will ensure our policies meet required insurance, legislative, and police parameters. The police department is providing information to the Select Board working group on what policies they think are most critical. From there, we will set an order and timeline."

She added, "Part of our joint meeting was to begin to lay out a process for addressing the policies that the IACP found most critical for the police department. Model policies for these are already up on the town's website under IACP resources. Over the next week and a half, we will be determining the timing, application process for community participation, and the first six IACP recommended policies the police department feels are most critical to put in place."

The Select Board is expected to vote Aug. 24 on BPD mission and town vision statements that were developed during the staff and police workshops with Reed, the Aug. 5 public meeting at the Bennington Fire Facility and during a working group session this week.

Jenkins said the final versions the board expects to vote on are now posted on the website, as follows.

Mission statement for police: "The Bennington Police Department is accountable to the Community for providing everyone, regardless of identity, with respectful and equitable law enforcement, protection, and service. The Department and the Community will achieve this through collaborative and positive relationships which contribute to the betterment of our quality of life."

Vision statement for Bennington: "Bennington is a welcoming, engaged, inclusive, and resilient community where everyone, regardless of identity, shares in our vitality and benefits from an outstanding quality of life."

Reed, who previously worked with other police agencies, including the Vermont State Police, on similar reform efforts, told the Select Board Monday that he was impressed by the participation of about 50 people in the Aug. 5 meeting. The format at the firehouse building allowed a number to attend and was also held as a videoconference session and recorded by CAT-TV, the local cable access channel.

"We were really successful in mining community wisdom," he said, "and that wisdom was clearly reflected in both statements."

He said that once a task force has been established to consider police policy change recommendations, he expects that work will begin in September and last six to eight weeks.

Reed added that he expects the three permanent members of the seven-member task force to be Assistant Town Manager and Planning Director Dan Monks, Select Board member Bruce Lee-Clark — who along with Jenkins and Jeanne Conner make up the board's working group coordinating the review process — and a representative of the police department.

Four members of the community, including a different group for each IACP recommendation considered, will fill out the task force groups, he said, adding that the residents selected for each should reflect the community groups most likely impacted by the policy being considered.

Reed said he believes police use of force policies will be considered first.

Reed said he will advise the Select Board to put off final consideration of a citizen oversight entity until after the Legislation begins again in January, as police oversight bills are expected to be proposed.

Asked by caller Mike Bethel during the Select Board meeting Monday why police were not participants in the Aug. 5 public meeting, Reed and Town Manager Stuart Hurd said Chief Paul Doucette and other officers were following the videoconference meeting but the intent of town and police officials was to "listen to the thoughts of residents."

The mission and vision statements were revised during that meeting from initial statements developed during the workshops Reed held for officials and police earlier in the process, Jenkins said.

The IACP report, released in April, concluded that the department's "policies appear neutral but the lack of policy in other areas may lead to bias in implementation of the current policies. Furthermore, additional areas of policy that are not currently part of BPD policies could add value to the BPD, increase accountability, and build trust and legitimacy in the community."

"Bennington was unable to provide full and detailed data, policies, and vision and mission statements that clearly address bias-free practices; economic or past criminal record(s); and gender, sexual preferences, or racial disparities, which suggests that data collection, analysis, and dissemination processes need to be examined," the report states.