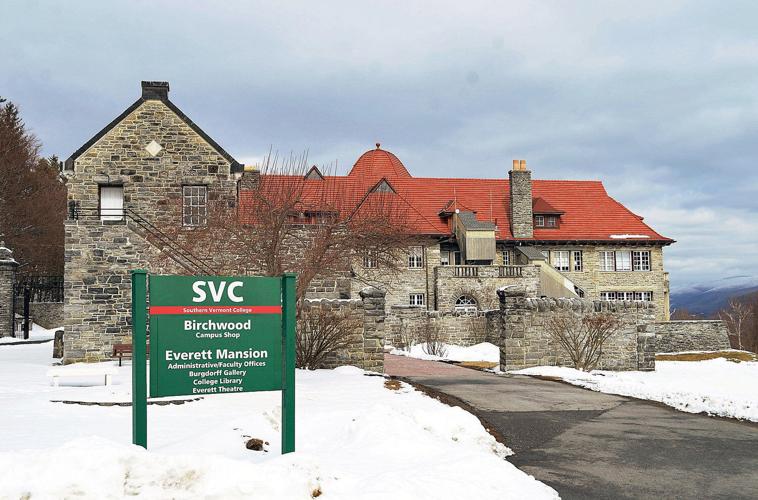 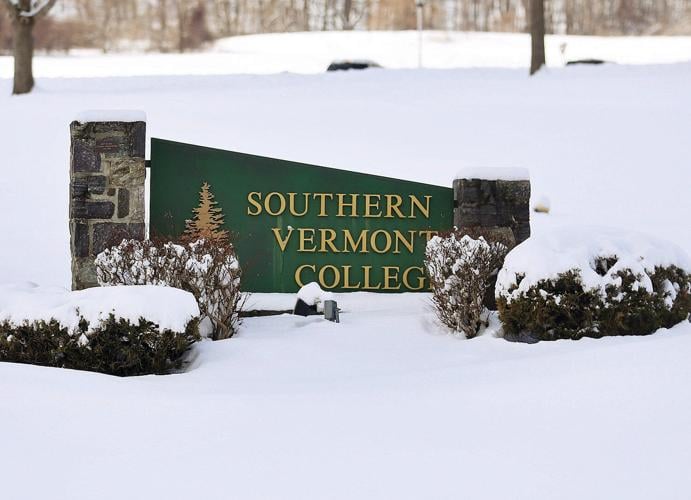 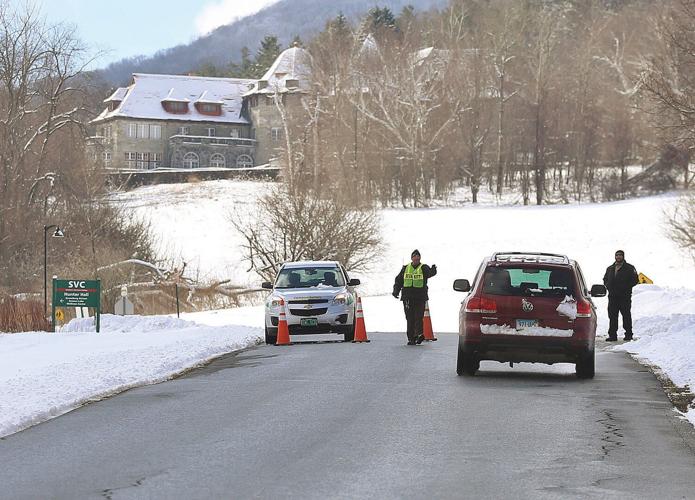 Campus Safety officers stop a vehicle on the way onto the campus Monday. The campus was closed to the public all day. 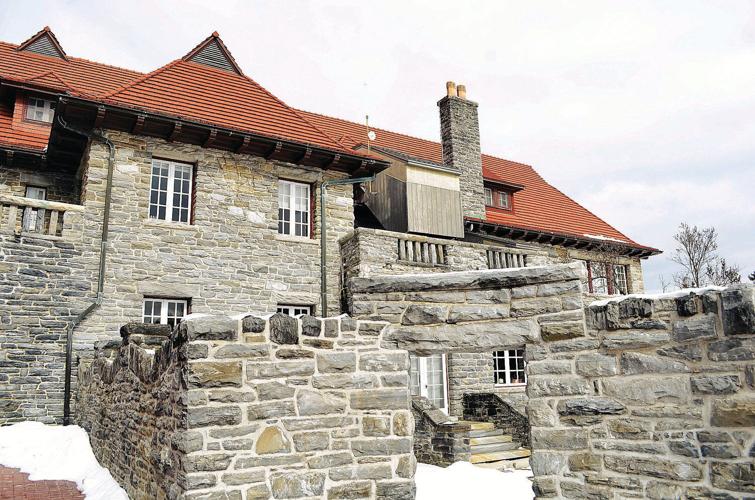 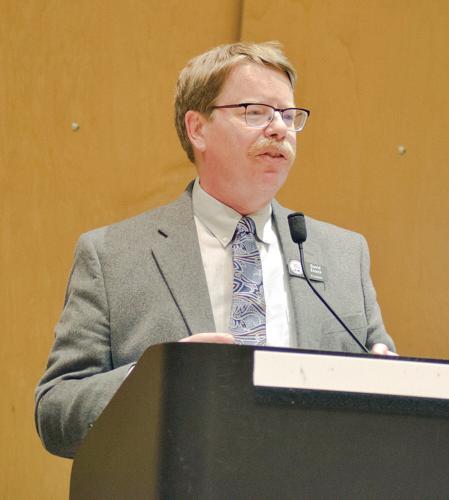 Campus Safety officers stop a vehicle on the way onto the campus Monday. The campus was closed to the public all day.

BENNINGTON — The Southern Vermont College campus and surrounding community continue to react to the announcement Monday that a school that dates back to 1926 will cease to exist following the spring semester.

The SVC trustees had voted Friday to begin the closure process, determining that there was "no way forward" for the college because of enrollment decline and related debt issues.

The decision came a day after a show-cause hearing before the New England Commission of Higher Education (NECHE) to determine whether SVC should be placed on probation for failing to meet the financial resources standard for continued accreditation.

College officials held a series of meetings Monday to announce the closure and explain the details to students, faculty and staff members.

"On Friday morning," said President David R. Evans, "the board voted to close the college at the end of the spring semester, concluding that, given all the factors including the fact that we ceased recruiting new students almost immediately after receiving notice of the show-cause hearing, and right in the middle of the prime recruiting season, suggested that there was no plausible way we could continue our trajectory of increasing numbers of new incoming students, and as such would face an impossible fiscal situation next year."

Evans said he also was informed by NECHE that the commission voted following the hearing to withdraw the college's accreditation and indicated that the accreditation could remain in effect through Aug. 31.

NECHE later issued a joint statement in conjunction with the college about its decision to withdraw SVC's accreditation.

Evans and other SVC officials discussed the decision and its ramifications during meetings with faculty and staff and then with students.

The college campus was closed to the public during this process, which was questioned Monday afternoon by the Banner. Evans responded via email, saying: "What we are trying to do now is give our students and faculty/staff some privacy to mourn and be angry and whatever else."

"Our first priority during the closure process is to support our students in continuing their education with the least possible disruption," he said, "which involves helping them find institutions with strong program matches, reasonable arrangements that help avoid financial hardship, and supportive institutional culture that will help them adjust and thrive."

With accreditation remaining in effect through Aug. 31, Evans said the college will assist students who need only a few credits to complete their degree and those seeking to transfer to other colleges.

All students who complete graduation requirements this semester will receive an accredited SVC degree, he said, adding that NECHE has not questioned the school's academic programming, only its financial stability.

In addition, the school announced that Massachusetts College of Liberal Arts in North Adams, Mass., has set up a website to assist SVC students wishing to transfer to that school. MCLA representatives will be on the SVC campus Tuesday.

Evans said SVC was "already facing extremely tough challenges, and NECHE's show-cause order effectively ensured that the college could not survive. We did the ethical thing by ceasing new-student recruitment when we learned of the possible adverse accreditation actions that could come from the hearing, but given our thin margins and need to grow enrollment to sustain ourselves, cutting off our supply of potential new students in the heart of the recruiting season was simply something that we could not overcome."

Evans said the trustees had discussed numerous proposals for overcoming a significant enrollment decline over the past five years and related debt issues.

But during a meeting on Feb. 22 involving trustees, attorneys, other advisers and senior staff members, it was decided that the financial challenges to meet the NECHE financial resources standard appeared insurmountable.

"The upshot of all this is we don't see a financial way forward with the college," Evans said.

The college trustees met again on March 1 and made a final decision to close the institution, which dates back to 1974 as Southern Vermont College, evolving from the former Saint Joseph College, which was founded in downtown Bennington in 1926.

The task SVC faced included submission of a five-year financial plan to NECHE and evidence of a viable path toward restoring the college to stability within two years.

Within two years, the college would have had to be financially stable under a federal requirement, "and we don't think we can do that," Evans said, especially in light of the show-cause hearing announcement.

Publicity of that notice "massively damaged our recruiting," Evans said, lowering enrollment projections for next year by 90 students.

"We do believe we could have figured out a way if this hadn't happened," he said, but added that NECHE is "doing what they are supposed to do" to protect the public, and posting such notices is a requirement.

"We all deeply regret the closure of the college," he said. "Everyone who works here knows that SVC is an institution that puts students' learning and wellbeing first, and we are concerned that colleges like ours are increasingly endangered by demographic and fiscal challenges, particularly in the New England region. Our leadership team has done outstanding work in seeking ways to sustain the college, and now that that has proved not possible, to carry on our mission by supporting our students and employees to the maximum possible extent during the college's final months."

The SVC trustees issued a statement Monday on behalf of the board through Chairman Ira Wagner, saying in part, "This decision was made with great sadness and with a tremendous amount of regret."

The college is not unique among small colleges in facing financial challenges, according to the statement, and the enrollment decline was what primarily led to the decision to close.

"We were projecting 365 students," Evans said, but now "the best case scenario is for 275 students," following the NECHE media release last weekend.

In addition, Evans said, "the market has changed," with "a dozen to 15 colleges in the region in the same boat," which has prompted the accreditation organization to be more rigorous and inflexible during periodic reviews than in the past.

SVC was last accredited in 2009 and was due for a full review this spring, but NECHE also had visited the SVC campus for a "focused evaluation" of financial and enrollment issues in 2017. Afterward, the college announced a plan to boost enrollment and take other steps to make the school more financially secure.

A number of small colleges in New England and other regions of the country are struggling with similar falling enrollment and related declining revenue from tuition —all of which is exacerbated by a demographic trend toward fewer high school graduates throughout the region.

Evans said enrollment at SVC had been increasing modestly since 2016, and the fiscal issues might have slowly resolved with more students each year and with an infusion of donor support.

SVC now has about 340 students, which is down from a peak of about 500 in 2012. A sharp decline was experienced over the next few years following issues that for a time threatened accreditation for the school's nursing program. The total of full-time nursing students fell by about 80 during that period.

Unrelated negative publicity occurred at the same time concerning alleged embezzlement of more than $800,000 by a former college financial officer, who later committed suicide in 2013 during the police investigation.

Those situations had an impact on recruitment and the size of SVC graduating classes, which fell from 127 grads in May 2015 to an expected 70 this spring.

SVC's budget was about $2 million in deficit, largely a result of that previous enrollment falloff, Evans said, and the enrollment plunge projected for next year following the NECHE notice would add more than $2 million to that total.

The school's problems are similar to those reported at many small colleges around New England and nationally that have been forced to close or have announced they are struggling financially.

Those include Green Mountain College in Poultney, and Mount Ida College in Newton, Mass., which have closed or are expected to in the spring; the College of St. Joseph in Rutland, which will lose its accreditation Aug. 31 barring a significant financial turnaround, and Goddard College in Plainfield, which NECHE has placed on probation.

In addition, several other New England institutions have slashed spending or merged with other schools or programs.