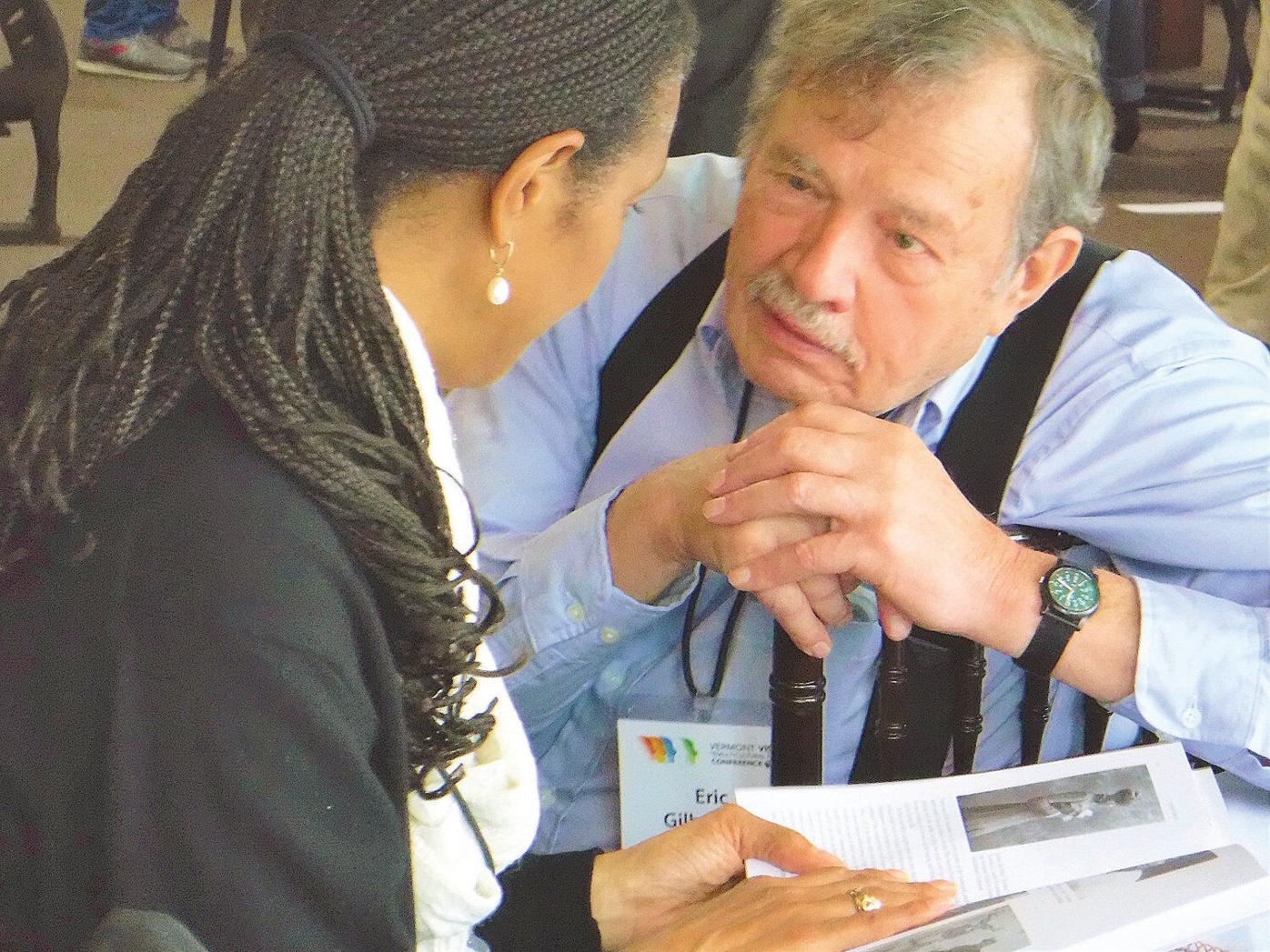 Eric Gilbertson of the Preservation Trust of Vermont listens to Melina Hill Walker of the Endowment for Health at the annual Vermont Vision for a Multicultural Future conference at Brattleboro's World Learning. 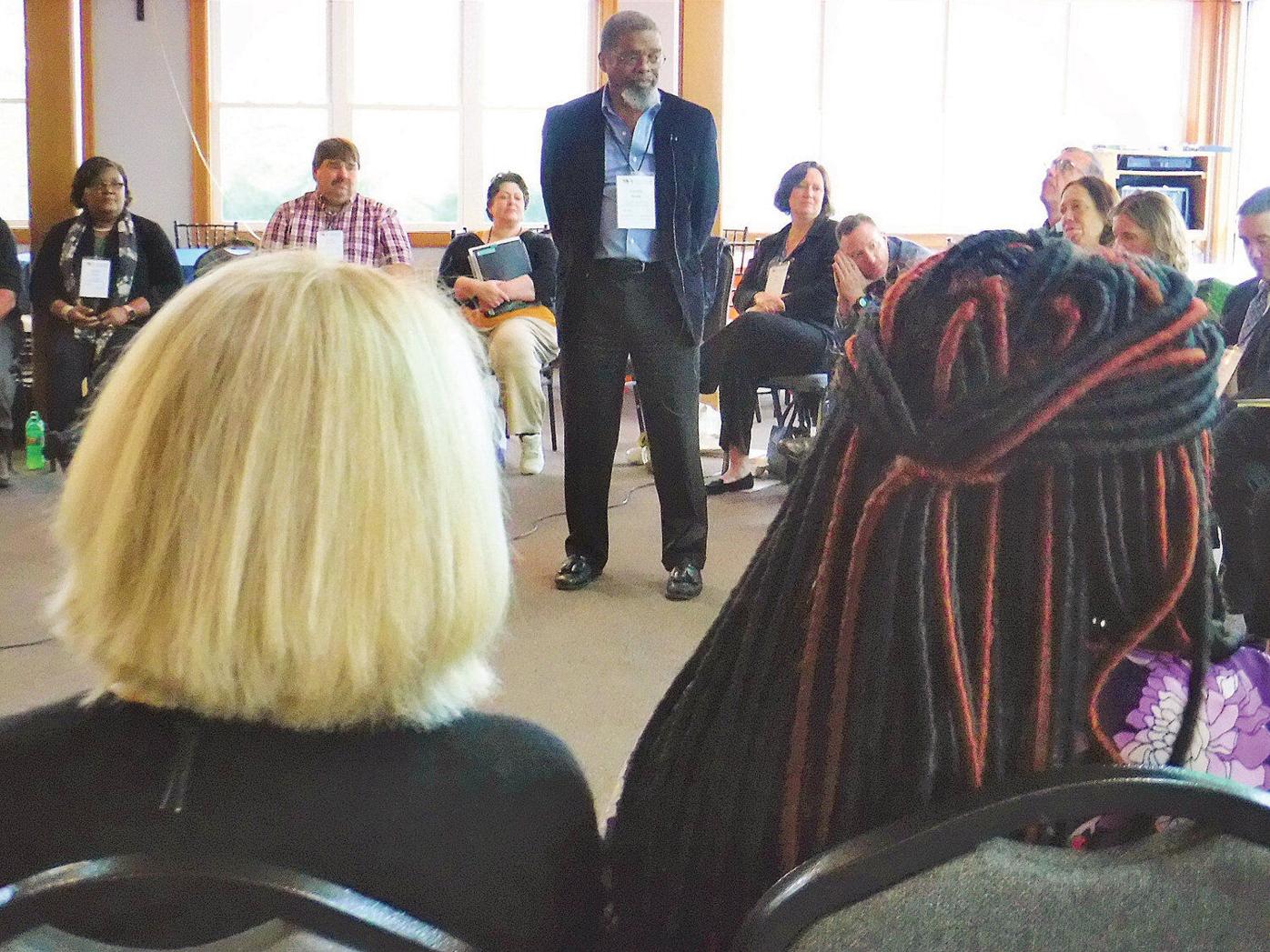 Vermont Partnership for Fairness and Diversity executive director Curtiss Reed Jr. addresses a circle of local and state leaders at the annual Vermont Vision for a Multicultural Future conference at Brattleboro's World Learning.

Eric Gilbertson of the Preservation Trust of Vermont listens to Melina Hill Walker of the Endowment for Health at the annual Vermont Vision for a Multicultural Future conference at Brattleboro's World Learning.

Vermont Partnership for Fairness and Diversity executive director Curtiss Reed Jr. addresses a circle of local and state leaders at the annual Vermont Vision for a Multicultural Future conference at Brattleboro's World Learning.

BRATTLEBORO — Curtiss Reed Jr. has seen this fall's "Saturday Night Live" skit in which a self-identified "neo-Confederate" seeks "an agrarian community where everyone lives in harmony, because every single person is white."

"That sounds like Vermont," another character offers as a punchline.

But the subsequent 3.2 million and counting YouTube views aren't stopping Reed, executive director of the Vermont Partnership for Fairness and Diversity, from working to rewrite the script.

"We're being painted in a way that's really unfortunate," he said at the seventh annual Vermont Vision for a Multicultural Future Conference last week at Brattleboro's World Learning. "How do we make the state the most desirable destination for folks of color?"

Vermont is the second whitest state in the nation at 92.9 percent — four-tenths of a point more diverse than Maine at 93.3 percent. Those figures come as the rest of the country is set to turn "minority white" by 2045, the U.S. Census Bureau projects.

Why doesn't the state have more people of color?

"We do have an underbelly of racism," Democratic gubernatorial candidate Christine Hallquist said in a recent appearance on comedian Samantha Bee's "Full Frontal" television show. "One of the most important things we can do is start focusing on diversity."

Vermont often is stereotyped as a progressive paradise, with a "Full Frontal" correspondent summing up residents as "the most diversity-craving white people I've ever met."

But Gov. Phil Scott opened the conference with video remarks noting that while the state prides itself on early historic efforts to abolish slavery and adopt same-sex unions, it's also the place where Bennington Rep. Kiah Morris, one of just five lawmakers of color in the 180-member Legislature, recently resigned after facing racial harassment.

"This is not and cannot be who we are," Scott said. "We must do better."

Reed noted many people of color interested in visiting search "Vermont" on the internet, only to find such headlines as "Hartford School Board Balks at Race Committee" or "Stowe Leaders Apologize After Campers Target of Racial Slurs."

"When people see that, they say, `Why should I come to Vermont?'" he said. "It sends a signal out to the rest of the world."

In response, the conference gathered representatives from the town of Hartford and Stowe, members of the state agencies of Commerce and Community Development, Education and Transportation and departments of Health and Public Safety, and leaders of colleges, churches, hospitals and community groups to talk about the social and economic benefits of promoting diversity.

"If we want to revitalize our downtowns and increase the number of ticket sold at ski resorts, we need to make this place a destination for folks of color," said Reed, who noted the latter population spends about $50 billion annually on travel and leisure. "Our vision is that we believe Vermont could be the model for inclusive thought and practice in the United States."

Brattleboro Town Manager Peter Elwell was one of several local leaders expressing a desire to help. About 15 percent of his community's 800 ninth- through 12th-graders identify as something other than "white." But the municipality made news last year when it was reported none of its government's 200 staffers were from a racial or ethnic minority.

Then the town manager saw the bigger picture.

"It's not about hiring a few people of color," he said. "It's about changing culture and creating environments where people feel welcome."

Brattleboro town government is working to educate its employees about "implicit bias" as well as hire a human resources director to help diversity the municipal staff to better reflect the rest of the community.

Newly elected Rep. Nader Hashim, D-Dummerston, for his part, wants the Legislature to aim to eliminate racial disparities in state government and ensure a multicultural perspective in Vermont classrooms.

Morris, although no longer holding her House seat, seconded that.

"I'm continuing to engage with local, state, national and international partners trying to address issues of bias, discrimination, bigotry and racism," she said.

To assist, the conference featured sessions with such titles as "Implementation of Anti-Racism/Anti-Bias Curricula," "Understanding and Eradicating White Supremacy Culture" and "Workforce Retention in a Hostile Environment." The hope, participants said, was to stop broadcast barbs of the state as a place where, in the words of "Saturday Night Live," "the leaves change colors but the people never do."

"This is not going to happen overnight," Reed said, "but if you don't start someplace you're never going to get where you want to go."

Kevin O'Connor is a Brattleboro Reformer and VTDigger.org correspondent who can be contacted at kevinoconnorvt@gmail.com.