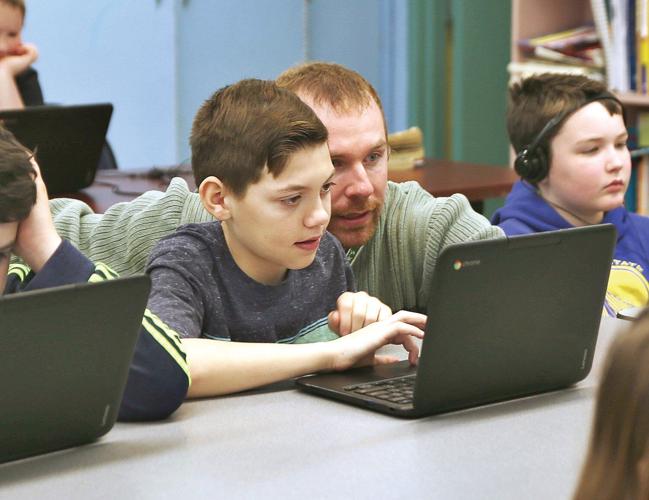 Fifth-grade teacher Taylor Robertson helps his student Van Gosseling with coding during the Hour of Code at Pownal Elementary School on Tuesday. 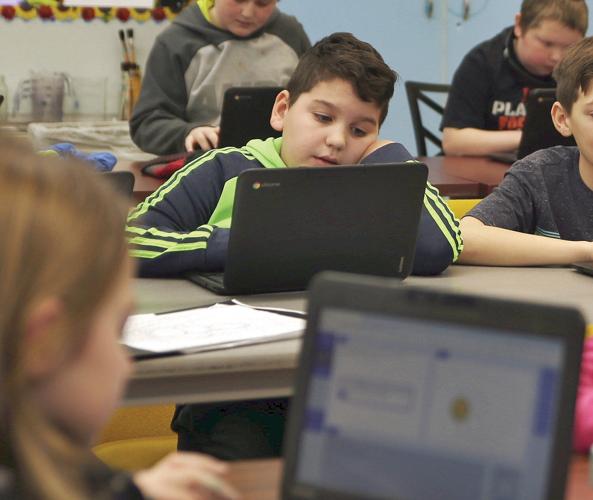 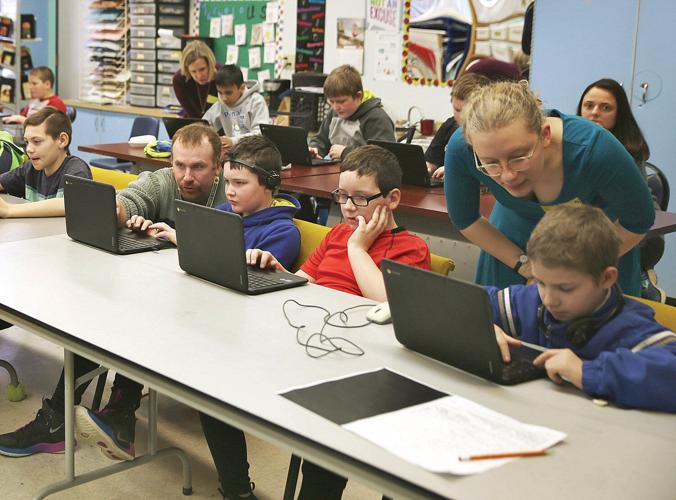 Students in Taylor Robertson's fifth-grade class learn coding during the hour of code on Tuesday morning at Pownal Elementary School.

Fifth-grade teacher Taylor Robertson helps his student Van Gosseling with coding during the Hour of Code at Pownal Elementary School on Tuesday.

Students in Taylor Robertson's fifth-grade class learn coding during the hour of code on Tuesday morning at Pownal Elementary School.

POWNAL — Computers know what to do — only if you tell them precisely what you want.

Students at Pownal Elementary School learned that lesson from Williams College students in a workshop Tuesday, part of a brand-new effort from the college to teach fifth-graders about coding.

"Have you guys ever baked cookies with your parents, or followed a recipe?" asked Francesca Hellerman, a Williams College student, of the about-12 students in Taylor Robertson's fifth-grade class. Many hands went up.

Hellerman, along with another student, Suzanna Penikis, conducted the workshops as part of a winter session course at the college, Hour of Code. The workshops run Tuesday and Thursday for an hour each at Pownal Elementary in Robertson and Traci Cristofolini's fifth-grade classrooms; they're also bringing the workshop to students in North Adams and Williamstown this month.

Students went through the coding exercises at their own pace, telling the program to do things like print words and make emojis — happy and otherwise.

Daniel Barowy, a professor of computer science at the college who is teaching the Hour of Code course, went around to help students who ran into trouble.

"Good, move it farther to the right," he said to a boy wearing a black sweatshirt. "Almost there."

Nearby, Penikis helped one student print an emoji on her computer screen.

"We write what we want to print in the parenthesis," she told the girl wearing a tie-dyed shirt. "After the open parenthesis here, we write 'emoji.'"

In Robertson's classroom, Hellerman offered her group a tip. She told them they had to remember to put in brackets whatever they want the computer to print.

Quotation marks also help the computer understand what to do, she said. If there are no quotations, the printer will think the word to be printed is an object, and it will wonder if it can make the object.

"Some of them, they're such computer naturals, "said Cristofolini, as she observed her students variously cheer or groan in frustration as they went through the workshop. "They're digital natives. I'm a digital immigrant."

Her students tell her they code in their lives outside school — namely through the online video game Fortnite, she said.

Of course, some students find it frustrating, she said, as the program requires precise instructions.

"I think it's great for them to step outside of their comfort zone," she said.

For Evan Hunt, 10, coding was easy. By half an hour into the course, he was inserting code to change the emojis his computer would print — everything from happy to cool to angry faces.

"Get rid of the happy, and change it to angry," he said, demonstrating how to do so with just a few keystrokes.

"This is a brand-new thing," Barowy said of the Hour of Code workshops.

An hour isn't a lot of time to actually teach computer science, he said. The workshops are intended to expose kids to the idea of coding, he said.

Students are given "a bunch of little recipes" to follow — basic coding.

"They're sort of drawing things on the screen," Barowy said. "We also have an extensive set of emojis."

Coding itself can be thought of like writing down a recipe for a computer to follow, he said.

And that's the challenge.

"Computers do exactly what you tell them," he said. They require extremely precise instructions.

Barowy said he and others brainstormed for about a year on how his students could interact with younger kids as part of their work.

"There's this push to introduce programming at an earlier age," he said. "I started thinking about how we could do that."

Last summer, thesis and research students built the whole platform used for the workshop from the ground up.

Computers are amazing devices, Barowy said. He quoted Steve Jobs, who said computers are like the "bicycle of the mind."

"You have to learn how to ride the bike," he said.

That's especially important, as coding has made its way into many subjects that aren't computer science, he said. For example, the field of digital humanities even uses coding."It's like math," he said. "Math is progressive. You need it in all kinds of fields."

Barowy's students will also use the workshops to conduct research. The technology used in Swell, called direct manipulation, enables the user to grab objects on the screen physically, without having to write specific code to do that.

They'll use these workshops to determine if the technology helps people learn coding faster.