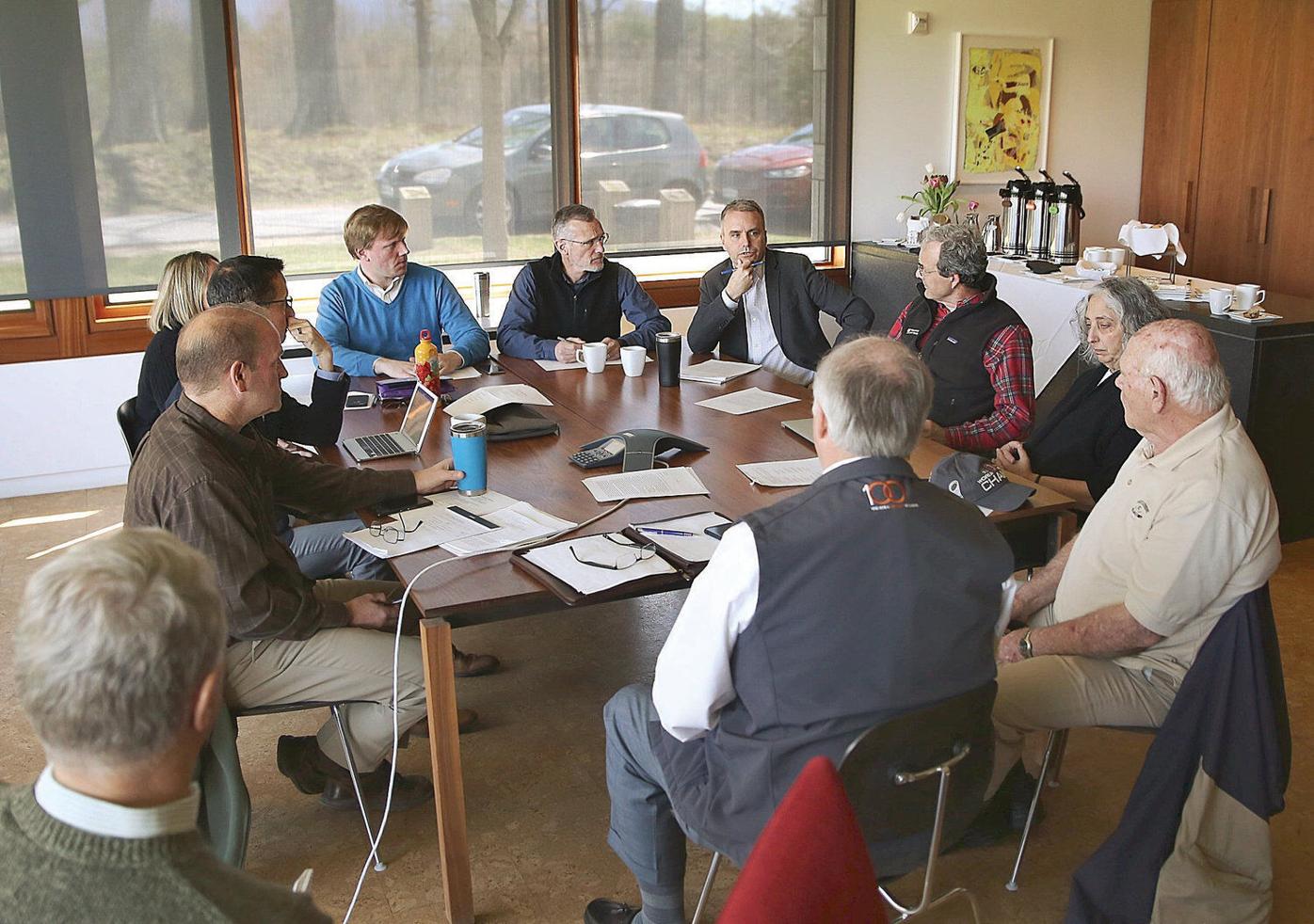 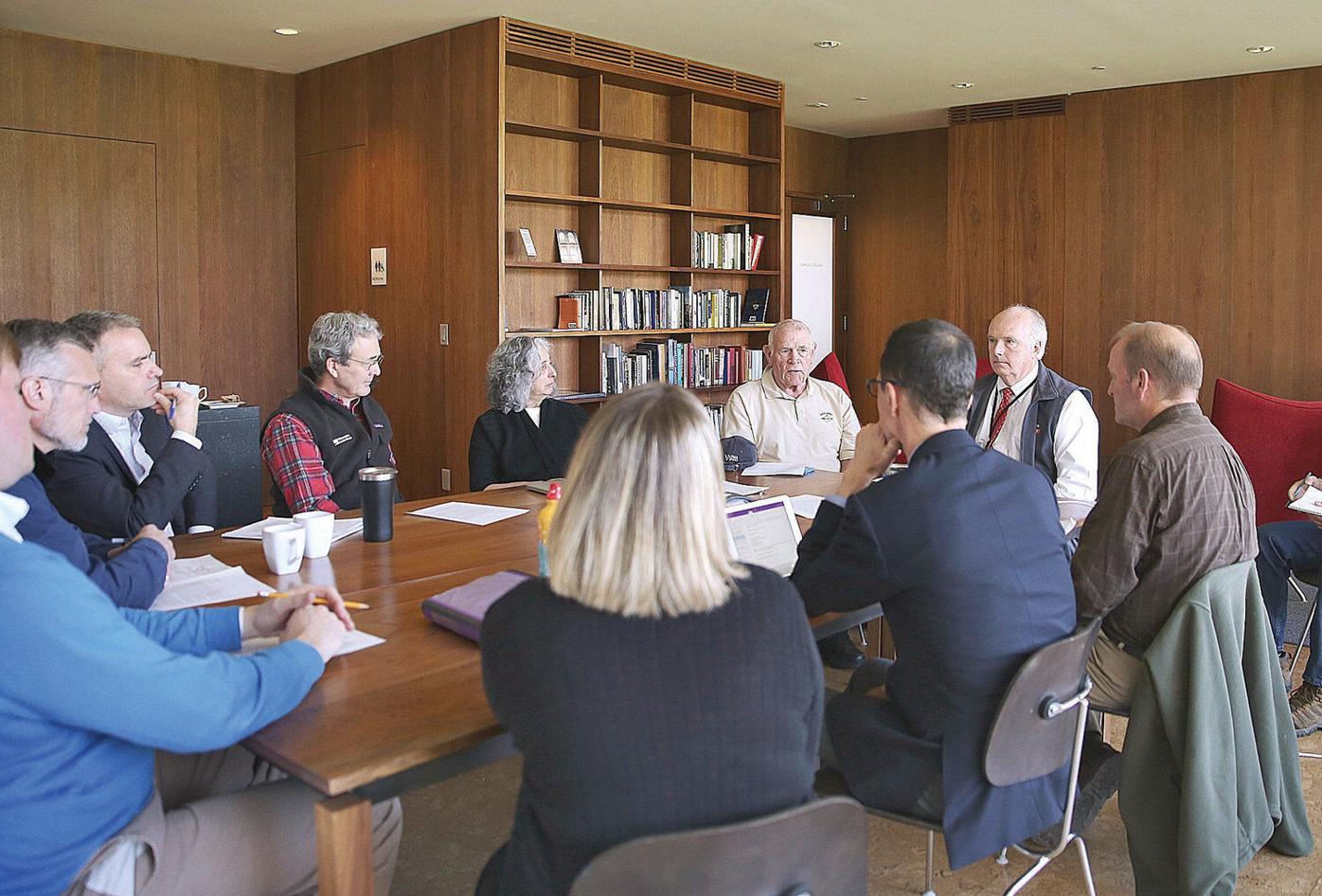 BENNINGTON — As many as two dozen state, regional and local officials have been meeting about twice monthly in response to the pending closure of Southern Vermont College; this week they went public to talk about their efforts.

According to Jim Sullivan, executive director of the Bennington County Regional Commission, officials and staff members from a number of government agencies and nonprofit institutions began discussing the situation shortly after the financially struggling college announced March 4 that it would close following the spring semester.

It was quickly resolved that information sharing, coordination and collaboration would be invaluable in dealing with "the critical needs" coming in the wake of the school's shutdown, he said.

Those include assisting students transferring to other institutions, employees seeking new jobs, and dealing with an economic shock as more than 100 jobs and the local spending of 340 students were lost the Bennington area.

In addition, Sullivan said, the group "stands at the ready" to assist the college in marketing or considering reuse options in the 371-acre campus and its buildings, including the historic Edward Everett Mansion — which are being listed with local and national real estate firms.

More than a dozen officials participating in the informal network — some in state offices upstate and linked via speaker phone — met Monday at Bennington College. Other officials or representatives also have been consulted depending on the specific initiative or program required, Sullivan said.

The broad areas of focus have been addressing the educational needs of SVC students; maintaining educational and workforce development programs in the Bennington area; helping college employees connect with new job opportunities, and exploring reuse options for the campus and its facilities.

Concerning the employment issues, Wendy Morse, regional director of the state Department of Labor, said the agency has initiated "rapid response services" here, including meeting with SVC employees on the campus and at the department's local offices to discuss general employment options and the specific needs of individual staff members.

Following up on the recent career job expo in Bennington, which attracted 46 employers, the agency is planning a career "boot camp" event in late May specifically for SVC employees.

Ted Brady, deputy secretary of the Vermont Agency of Commerce and Economic Development, said the state has placed a priority on ensuring a range of employment and economic development services are in place and remain strong as the college shuts down. He said state officials recognize that "higher education remains an enormous economic driver" for those areas where schools are located.

Unlike other regions where a college or other institution has closed, Brady said the Bennington area is "uniquely served by a strong economic and community development infrastructure," and was able to bring together an existing strong group of planning, business, economic development and other professionals to respond to the closing.

The state, for its part, is ready to assist in a number of ways with any reuse or development project involving the campus or its buildings, Brady said, adding, "all of that is on the table."

Bill Colvin, assistant director and Community Development Program coordinator with the BCRC, said he has "had talks with one party" concerning the SVC campus, which is being listed with a national firm, Keen Summit Partners, and is appraised at about $8 million for the main campus.

Matthew Harrington, executive director of the Bennington Area Chamber of Commerce, said "there are nonprofits interested" in the Laumeister Arts Center, which the college acquired through a donation in 2017.

That facility is being marketed by TPW Real Estate of Manchester with an asking price of $2.95 million.

Those real estate discussions "are in the early stages," Harrington said, but they offer "a good example of how we can come together" for a common purpose. He said TPW is working with Keen Summit Partners, which had never before had a representative in Vermont.

Donald Campbell, chairman of the Bennington Select Board, said the town has an interest in maintaining public access to the popular hiking trails on about 200 acres of the campus at the base of Mount Anthony.

Campbell also is southwest region director with the Vermont Land Trust, which through a 2005 agreement with the college placed that property under a conservation easement that would bar most development.

The Land Trust also has a first option to purchase the wooded acreage if it is sold, but college officials asked to put off discussions about that parcel, Campbell said, so they can focus on completing the semester and graduation and planning for the shutdown.

Concerning the SVC medical training programs, which other institutions have expressed an interest in taking over, Trisha Coates, of the Vermont State Colleges, said that system, Vermont Technical College and Community College of Vermont are all committed to enhancing educational options in the area in a collaborative manner.

The state colleges, she said, are "really doubling down on our commitment to Bennington and the region."

That includes possible collaborations involving Castleton University, CCV and VTech "on the kind of educatonal pathways that are going to serve a lot of students," she said, adding that the discussions are "inspiring a lot of creative conversations internally for the state colleges."

She said Castleton continues to explore a role in taking over the SVC registered nurse bachelor's degree program, which had an agreement with Southwestern Vermont Medical Center to provide both local employment and tuition reimbursements for those who complete the four-year program.

The health care organization and SVC announced the agreement last year in response to a looming shortage of registered nurses nationwide and in Vermont, which is expected to rapidly worsen.

Kevin Dailey, vice president for Human Resources at Southwestern Vermont Health Care, said Monday that the organization is discussing an agreement to preserve the program through Castleton in Bennington, adding, "It is critically important to SVMC to keep that in Bennington."

Sullivan said that it now appears Massachusetts College of Liberal Arts in North Adams, Mass., might assume a four-year radiologic services degree program at SVC. Both programs currently are now housed at the Vermont Mill on Benmont Avenue under a lease with SVC.

Options for faculty at SVC could involve positions opening within the state college system, officials said, as well as the emerging online education sector, which might allow instructors to remain in the Bennington area and work elsewhere.

Susan Scorboti, director of the Center for the Advancement of Public Action at Bennington College, where the meeting was held, and Sen. Brian Campion, D-Bennington, said that while many small colleges are facing declining student enrollments, particularly in New England, and financial struggles, "all colleges are looking to expand online," in Campion's words.

He and Sen. Dick Sears, D-Bennington, have been meeting with the group and also consulting with state higher education and development officials about options for expanding educational programming in Bennington.

Jonathan Cooper, community and economic development specialist at the BCRC, said the type of collaboration going on in response to SVC closing reflects "an emerging trend" and the local collaborative approach is being watched around the state.

"It has been very helpful and productive to make sure everybody is in the loop and working in the same direction," Sullivan said of the group meetings. He said the process has narrowed goals to things the group could do without being involved in the "inner workings of the college," as is goes through its final semester.

"We're really here to respond to issues associated with the closing and provide resources as best we can," he said.