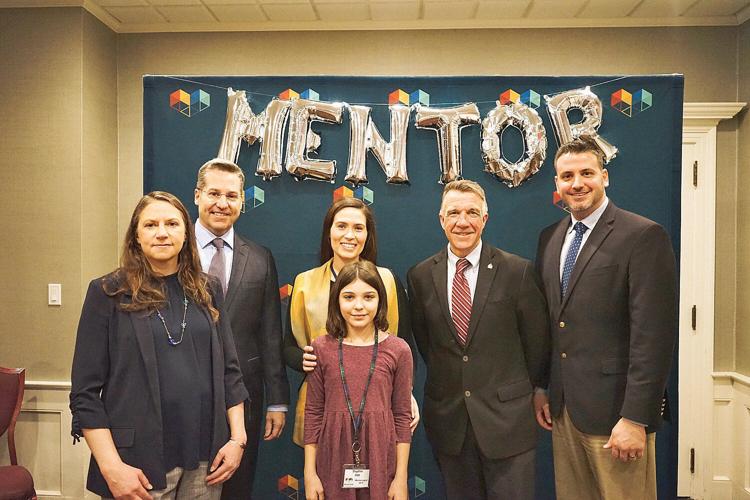 Kasia Sosnow (center) and her 'little sister' Sophie Hill with Gov. Phil Scott (second from right) and representatives of Comcast, co-sponsor of the Vermont Mentor of the Year Award, during the award ceremony in Montpelier on Wednesday morning. 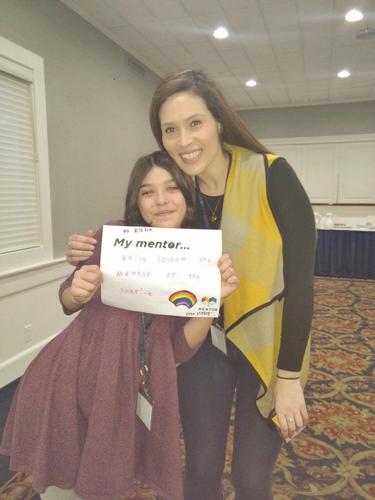 Sophie Hill, a fifth-grader from Manchester, witnessed her mentor Kasia Sosnow be recognized as 2019 Vermont Mentor of the Year in Montpelier on Wednesday.

Kasia Sosnow (center) and her 'little sister' Sophie Hill with Gov. Phil Scott (second from right) and representatives of Comcast, co-sponsor of the Vermont Mentor of the Year Award, during the award ceremony in Montpelier on Wednesday morning.

Sophie Hill, a fifth-grader from Manchester, witnessed her mentor Kasia Sosnow be recognized as 2019 Vermont Mentor of the Year in Montpelier on Wednesday.

MANCHESTER — A local woman has been named Vermont's "mentor of the year," edging out seven other candidates in the annual contest.

Kasia Sosnow, 34, was recognized in Montpelier on Wednesday for her volunteer work with United Counseling Service's Big Brothers Big Sisters program. For the past 2 1/2 years, she has served as a "big sister" to 11-year-old Sophie Hill, spending time with the Manchester elementary student every weekend including going horseback riding, swimming and visiting an animal shelter.

"Kasia exemplifies everything we admire about mentors here in Vermont," said Chad Butt, executive director of MENTOR Vermont, which co-sponsors the award with Comcast. "Her dedication to her mentee Sophie and her program are an inspiration to us. We're grateful for Kasia's service and for everything that she and the many other volunteer mentors across the state do year-round to support youth in their community."

Sophie, who was excited to attend the awards ceremony at the Capitol Plaza hotel across from the statehouse, is grateful for her relationship with Sosnow.

"It helps me get out of my shell and be who I am and love others," the fifth-grader said in an interview.

As the fourth recipient of the mentor of the year award, Sosnow will help recruit volunteer mentors throughout the state by writing newspaper commentaries and doing radio or TV interviews.

Sosnow, a teacher at the Manchester Elementary Middle School, said volunteering may seem like a huge commitment but it requires at least only an hour a week. In her experience, mentors receive as much as they give.

"Spending time with children helps keep us grounded and reminds us of the everyday miracles of life that we tend to take for granted as adults," she said. And as a transplant from Long Island, N.Y., Sosnow said her friendship with Sophie has made her feel more a part of the Manchester community.

Laurie Sallisky, coordinator of United Counseling Service's mentoring program in the Northshire, said the organization is "thrilled" about Sosnow's award. The group where Sosnow volunteers recently changed its name to Mentoring at UCS and is no longer affiliated with Big Brothers Big Sisters of America.

Sallisky hopes Sosnow's statewide recognition would help raise awareness about the importance of mentoring in Bennington County, as well as encourage more men and women to volunteer.

"It is hard in our community to get any mentors, period. To find male mentors is almost impossible," said Sallisky, who nominated Sosnow for the award. "An hour a week is the minimum, and that's not so very much when you're talking about making a significant, transforming difference in a child's life."

Young people with mentors are less likely to engage in risky behavior involving drugs and alcohol, and they're more likely to pursue college and post-secondary education, as well as develop good interpersonal relationships, according to national studies by Big Brothers Big Sisters and the MENTOR nonprofit organization.

Sosnow was selected by a committee as the 2019 Vermont Mentor of the Year from a group of three finalists. The field was narrowed down from eight nominees, including people from Londonderry and Middlebury, through a public vote on MENTOR Vermont's website.

The award is part of the organization's celebration of Vermont Mentoring Month each January.