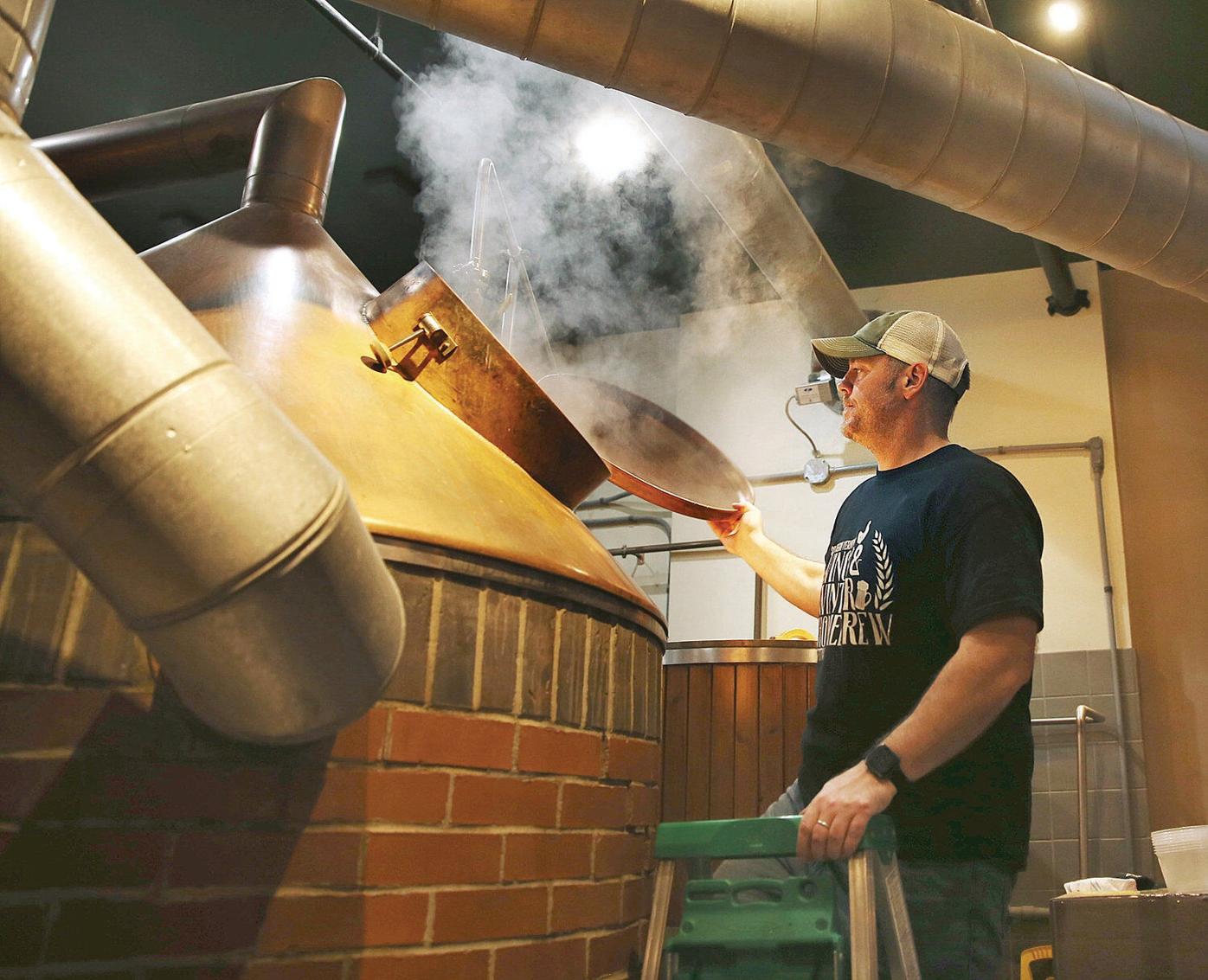 HOLLY PELCZYNSKI - BENNINGTON BANNER William Gardner, brewery manager at Madison Brewing Company Pub & Restaurant, checks one of the barrels at the pub during the brewing process on Thursday afternoon in Bennington. 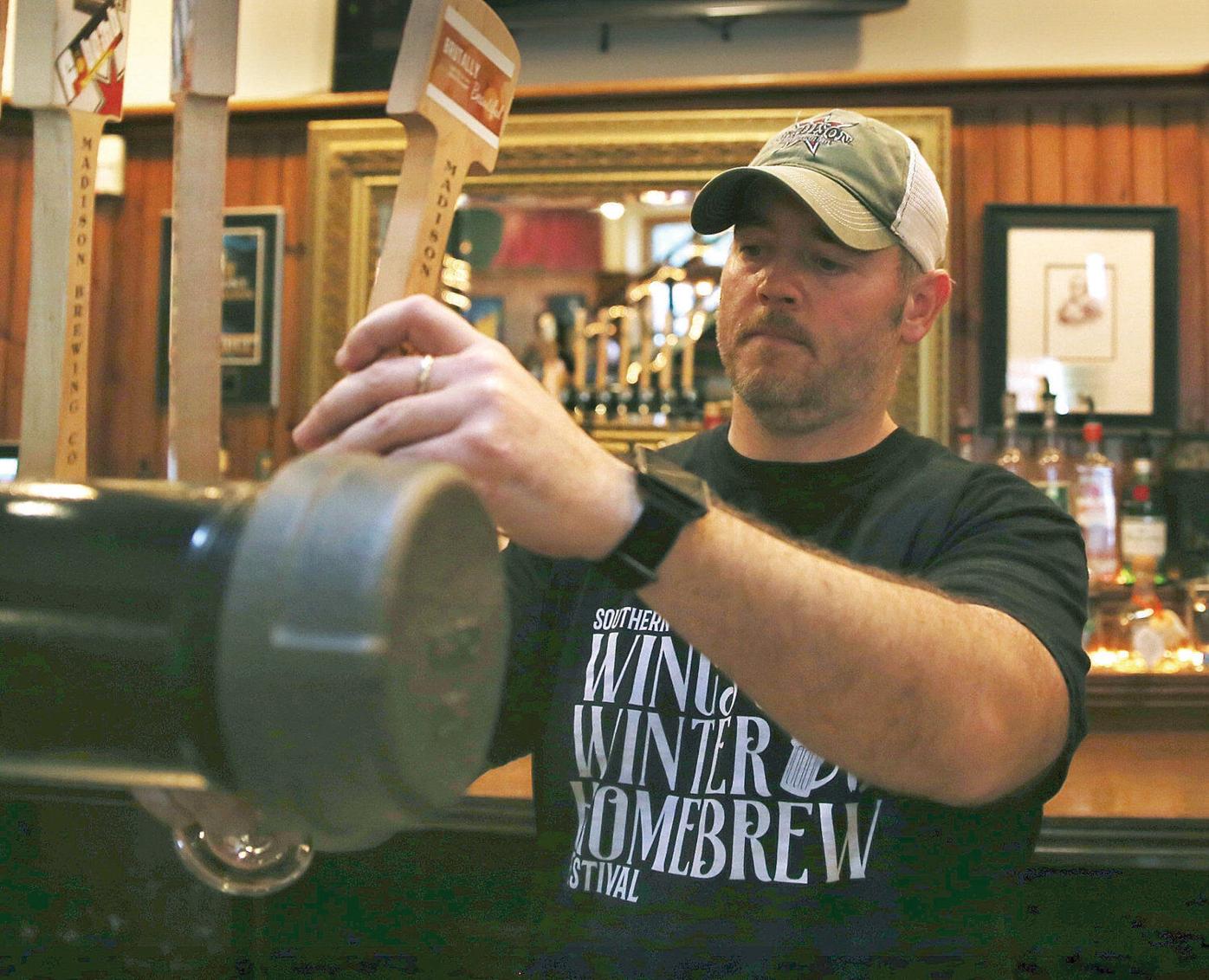 HOLLY PELCZYNSKI - BENNINGTON BANNER William Gardner, brewery manager at Madison Brewing Company Pub & Restaurant, checks one of the barrels at the pub during the brewing process on Thursday afternoon in Bennington.

BENNINGTON — Bennington's own brewing company will soon debut a Farm to Glass series of beer made from locally grown and locally sourced ingredients, beginning with a crisp, refreshing Saison.

"We've been wanting to do something like this for awhile," said Brewery Manager William Gardner, who says the brewers are "super happy" with how the beer has turned out.

Gardner describes the beer as a "traditional Saison with not-so-traditional ingredients."

Typically in a Saison, yeast consumes sugars which makes the beer dry. As Gardner began to ponder what local ingredients could be used for beer this fall and winter, he realized Shaftsbury's However Wild Honey Farm could supply the sugars needed for the beer in the form of honey.

Nugget and Chinook hops from Hoppy Valley Farm in Pownal provide balance to the beer and create a slightly spicy aroma and flavor. The combination of local hops and honey will give the beer the dry, crisp, and refreshing taste Saisons are known for.

Most beers complete fermentation in four days and are on tap after nine days, Gardner says. However, since Saison yeasts are known for a slow fermentation process, this batch took about ten days to ferment.

Depending on feedback, Gardner hopes to brew at least one more batch.

While Madison Brewing Co. typically uses pellet hops, Hoppy Valley keeps its hops in the natural cone. To use these hops, brewers at Madison put them in a large mesh bag in the brewing kettle.

"It works pretty well," Gardner said. "It's a little extra work on our end, but totally worth being able to use those hops."

Gardner explained that hops are an interesting ingredient because, like grapes, they pick up different elements from the soil they are grown in and flavors change from region to region.

Both farms were "ecstatic" that a local brewing company was interested in using their produce, he said.

Gardner says he plans to go to local winter farmers markets to get ideas for what other local produce could be used in the Farm to Glass Series and encourages farmers to reach out to Madison Brewing Co. if they have a product they think might work in a beer.

"I would love people in the community that are growing or producing things that they think are a good crossover for beer to reach out," he said. "I imagine once spring comes, we'll have a lot more options."

He's also brainstorming what type of beer could be brewed for the holidays; last year a spruce tip beer was featured, and he'd consider featuring it again this year.

Gardner began working at Madison Brewing Co. about five years ago, and moved up the ranks from head brewer to brewery manager. When he arrived, craft beer had started to gain traction across the country and he has seen the popularity skyrocket since. The brewing company is selling "a lot more cans" and is hoping to begin distribution in a few weeks, Gardner said.

"We're really at the cusp of taking that next step," he said.

The brewery started with eight taps, and now boasts 14.

"I think we were able to grow with the times," he said. "Being beer nerds and geeks here, we're always following the trends."

While Gardner has a preference for stouts and hoppy beers, the head brewer enjoys beer with a heavy German influence.

"I think we're a good balancing act together," Gardner said.

In addition to expanding to distribution and brewing more varieties of beer, Madison Brewing Co. is also focusing on branding and spreading the word about the company.

"Bennington sometimes is kind of a pass-through so we're like `Hey, stop in Bennington. There's good beer here, check it out; have lunch or dinner, grab a four pack to go and keep going,'" Gardner said. "A lot of people even come in like `I drove past this place ten times and this is the first time I stopped in; this is awesome.' We love that sort of feedback."