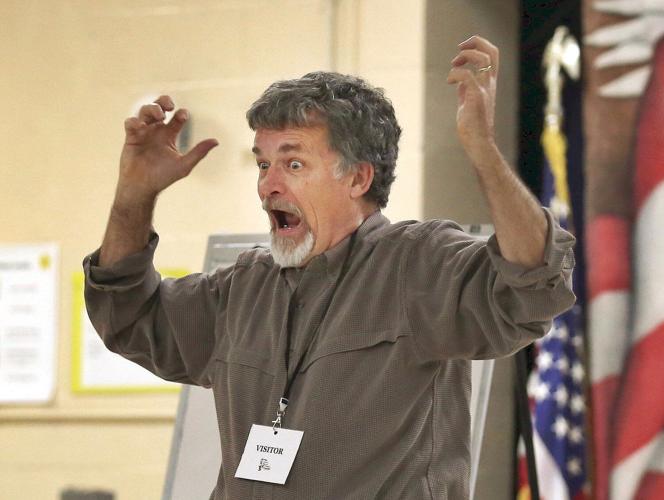 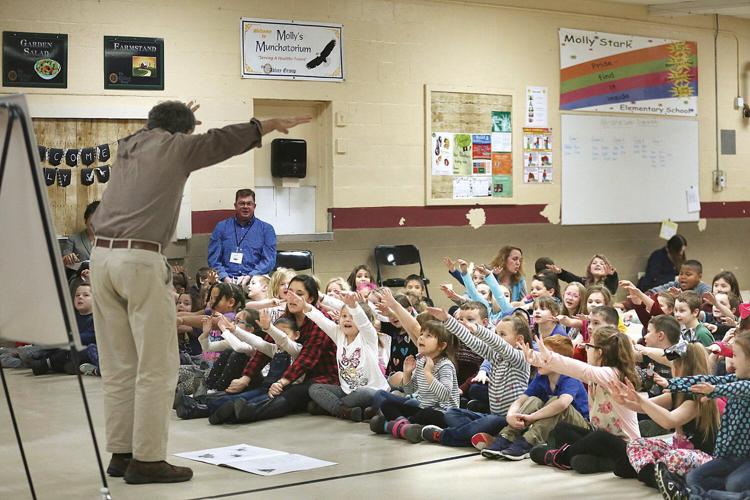 Marv Klassen-Landis animates a poem with descriptive moves to excite his audience on Monday afternoon at Molly Stark School. 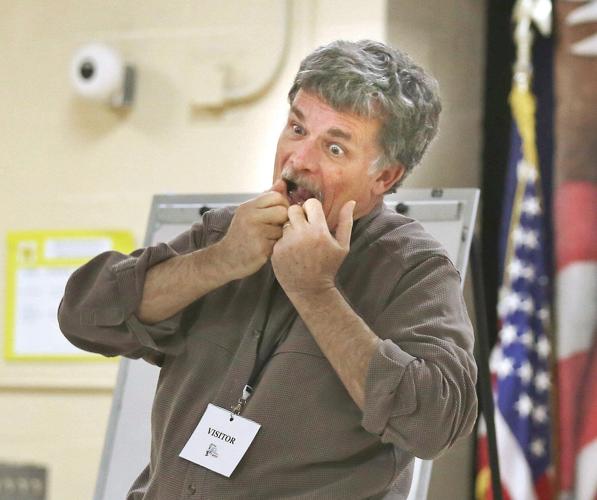 Marv Klassen-Landis animates a poem with descriptive moves to excite his audience on Monday afternoon at Molly Stark School.

BENNINGTON — Some children learn better through movement — but when they sit much of the day, they don't get that opportunity very often.

For Marv Klassen-Landis, of Windsor, movement is important to his work, which students at Molly Stark Elementary experienced Monday through his interactive poems and stories.

"Some kids, when they move to a poem or act out a story, something clicks," Klassen-Landis said. In his visit to Molly Stark, he divided his time in four about 40-minute sections, each with different grades.

"Tell me what I am, besides a human," he said after showing the group of about 50 students an oversized book, "Jump, Children, Jump" with his name on the cover.

Author, they agreed. What else?

"You're someone who has a beard," one boy said.

"What about this word, though, poems?" he said, pointing to the book's cover. "What do you call somebody who writes poems?"

A poet, one student said.

Klassen-Landis is a poet, storyteller and theater artist who is co-founded Children's Voices Theatre, which aims to inspire young people to express themselves through writing and performing. He writes poetry and fiction for children and adults.

"The way I did this book, I actually started with the pictures," he said, showing the group pictures in the book. "I did it by pretending I was the children in the pictures."

He said he'd read the students one of his poems from that book — with a twist. They would read the lines back, and act out the action in the poem as he did.

The kids prepared, pretending to hold bright red sleds. "I tumbled down the hill, head over heels," Klassen-Landis recited the story of someone going down a hill on a sled, and falling.

"The cold snow burns," he said, as the students matched his movements, holding their hands to their cheeks. After that, he asked the kids to do the same motions — without saying the words.

Klassen-Landis' visit was made possible through a grant from the Children's Literacy Foundation.

Molly Stark was awarded the Children's Literary Foundation Year of the Book grant, in 2017 for the second straight year. The money, $25,000 in all, goes towards literacy programs. The program's goals include encouraging enthusiasm for books, supporting literacy curriculum and ensuring children have access to high-quality books.

The grant has provided for authors, illustrators and storytellers to come to the school, and has also enabled children to get free books, said Allyson Hoffman, library media specialist. Another author, Ted "That Poetry Guy" Sheu will also visit the school in April for poetry month through the grant.

After telling an interactive story about Farmer Bear and his quest to visit Loretta Bear, Klassen-Landis read his poem, "Jump, Children, Jump," telling students to listen for patterns in the words.

"How does each verse start?" he asked. "Raise your hand if you think you know."

Each verse of the short poem starts with the same words — jump, children, jump.

The second lines all begin with words like hey-ho or haha, he said. "Raise your hand if you have a new idea."

One boy suggested "eye-eyi" to to replace a word like "hey-ho."

One of the poem's lines always says to jump like an animal — like a kangaroo, or a grasshopper.

Klassen-Landis asked if anyone could think of another animal that is good at jumping. One suggested a rabbit.

In about the last ten minutes of the workshop, they'd made a new verse in the same style as the others for Klassen-Landis poem.

"I think it helps them get excited about literacy, and reading," Hoffman said of Klassen-Landis' visit.

Meeting authors enables students to see the people behind the books, Klassen-Landis said. It also brings what people like authors and illustrators do to life, as something students could do themselves.

"It makes it real," Klassen-Landis said, pointing out that he never met an author or illustrator as child. And, having the opportunity to move is a good thing too.

"There's so many children, they learn and express themselves through movement," he said.