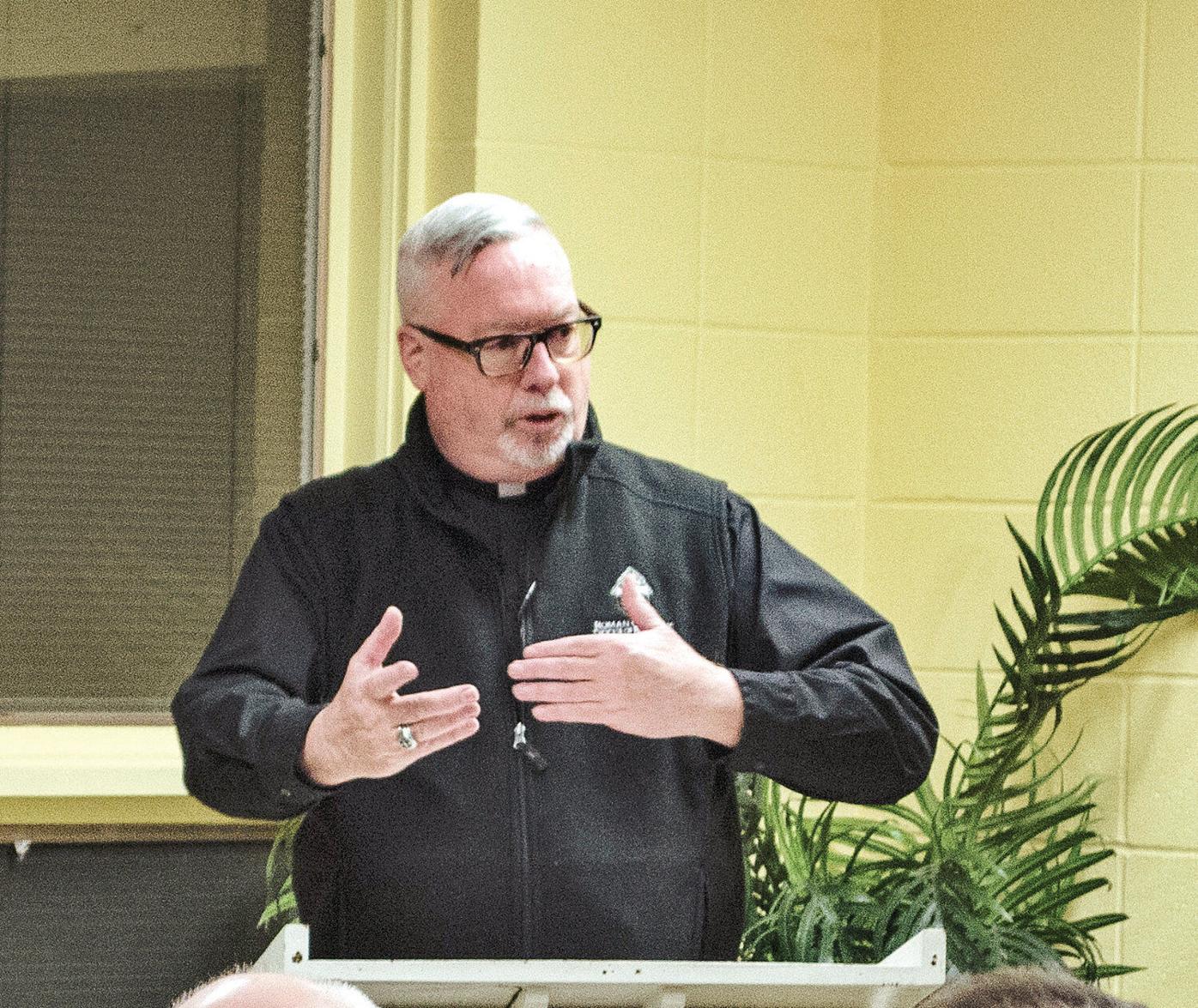 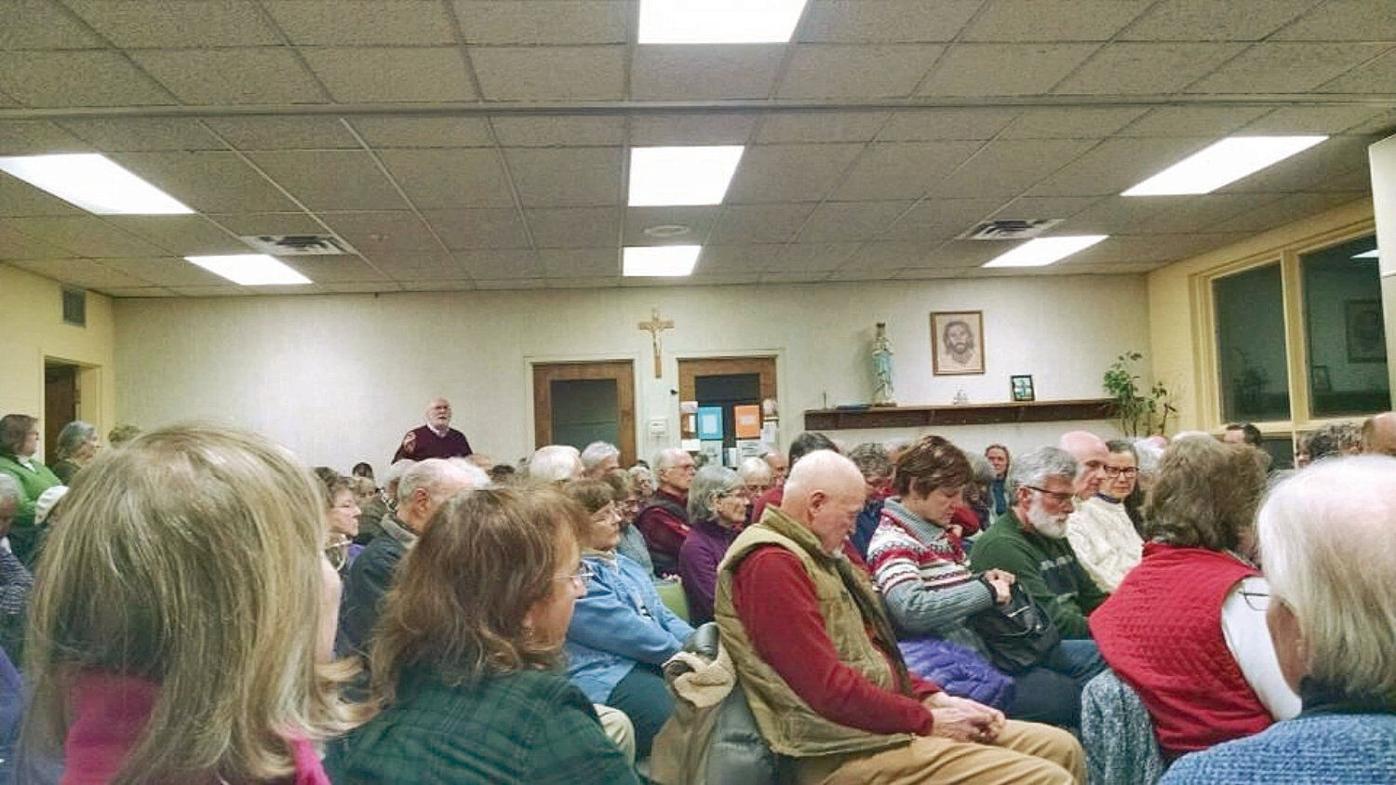 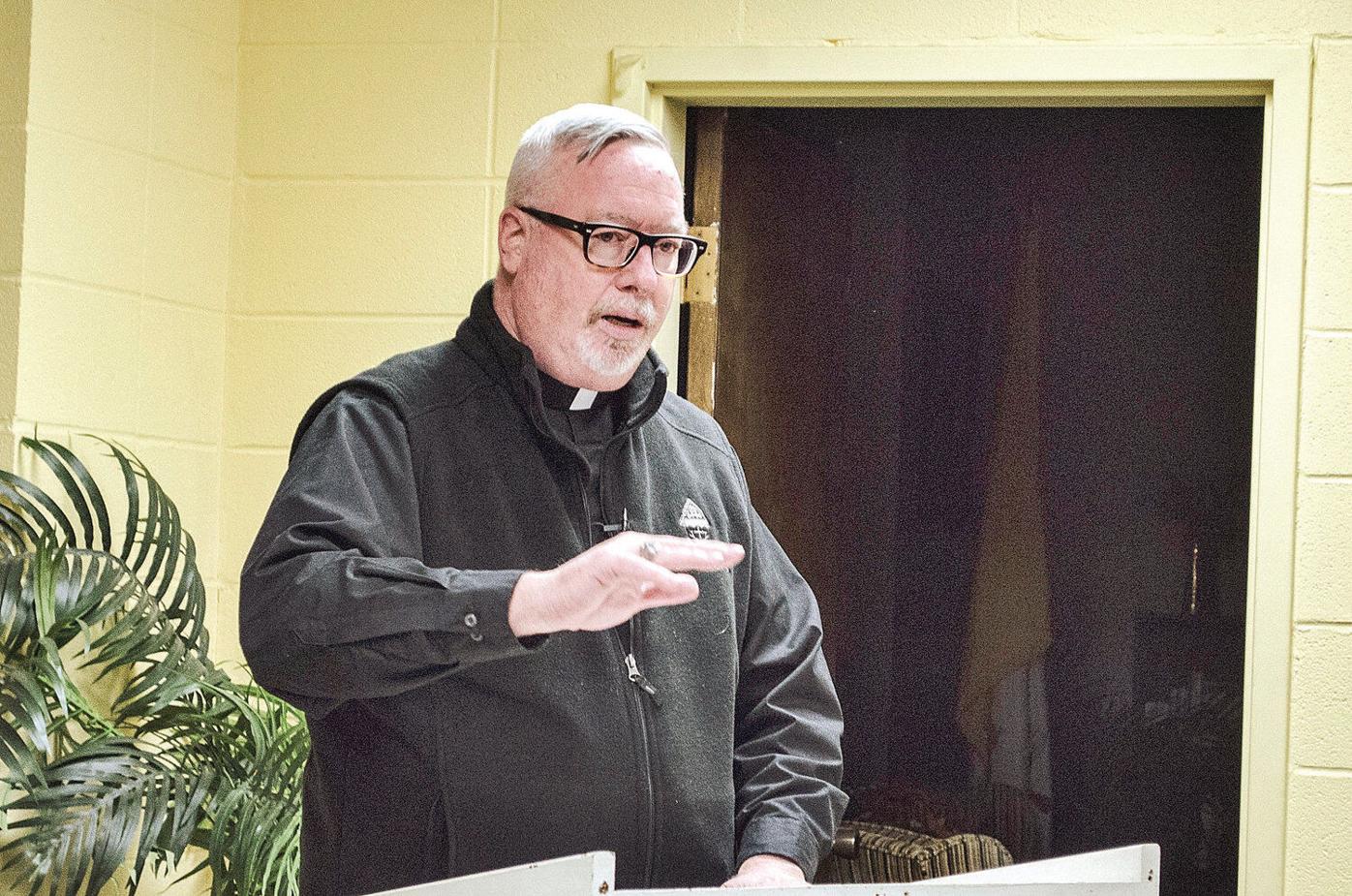 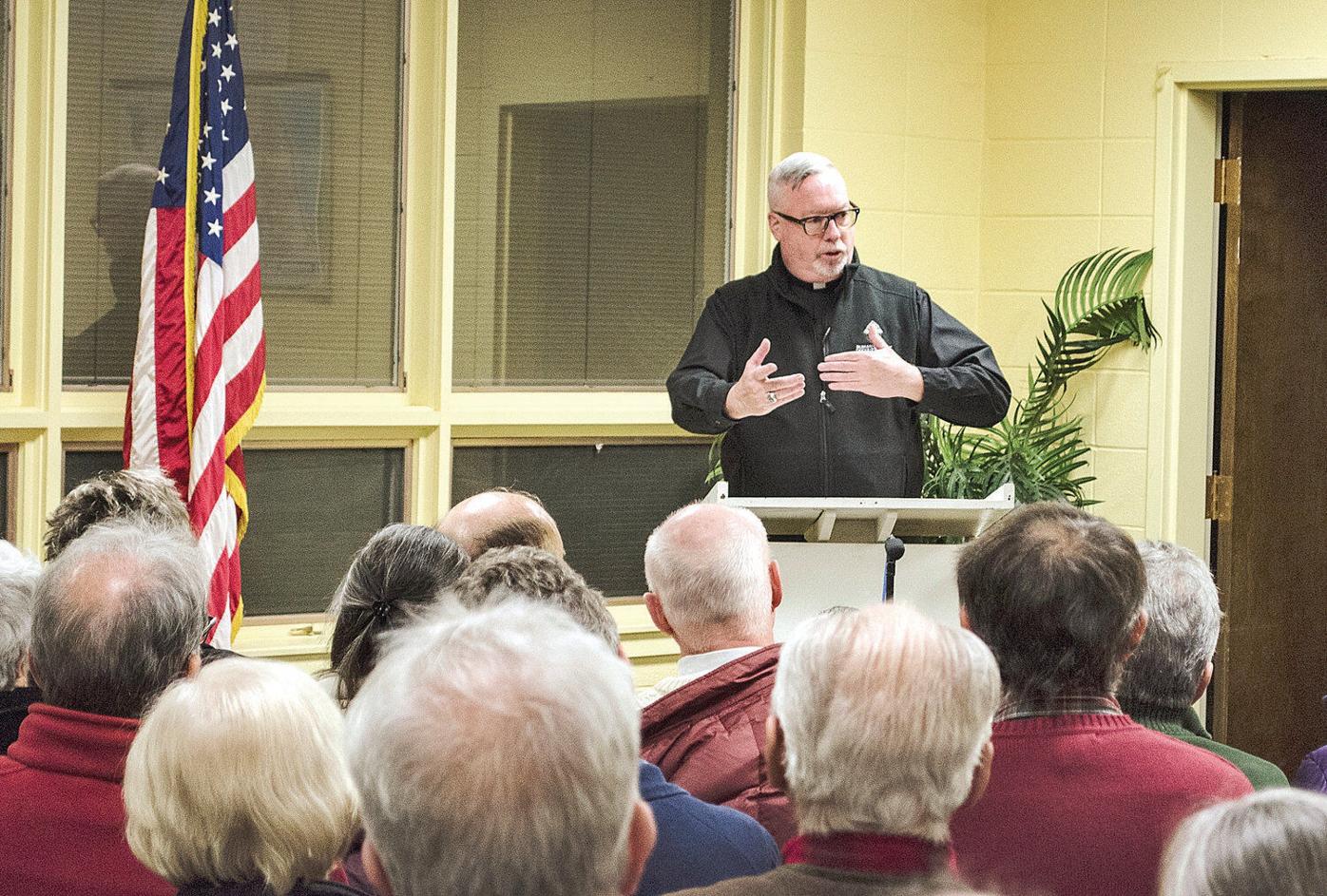 BENNINGTON — Roman Catholic Diocese of Burlington Bishop Christopher Coyne took head on some of the most controversial issues facing the Catholic Church during what was billed as a town meeting Monday at Sacred Heart St. Francis de Sales Church.

More than 100 people packed a double-classroom space in the parish hall at the church on Monday night. This town meeting and others being held around the state grew out of the diocesan synod process, which is winding up. The three focuses of this statewide consultation effort are evangelization, building vibrant parishes and communication, Coyne said.

"One of the communications points was that people felt that there wasn't enough two-way communication," Coyne said, "that they were getting letters from me or videos but they didn't have an opportunity to talk to me and to talk with the diocese.

"So this is a way to have that two-way engagement, to have a conversation that goes back and forth," he said. In response to this concern, Coyne also will be holding open office hours on the fourth Monday of every month.

"I'm learning a lot, some of the stuff I'm learning is very challenging," he said of the town meeting process.

Toward the end of the 90-minute session, Thomas Dee, president and CEO of Southwestern Vermont Health Care, a member of the parish, brought up the recently signed Reproductive Health Act in New York and similar legislation which has been introduced in Vermont. On Jan. 19, the bishop of the Diocese of Albany, N.Y., Edward B. Scharfenberger, published an open letter to Gov. Andrew Cuomo arguing that "the RHA goes far beyond Roe vs. Wade in its aggressive extremism."

In Vermont, H.57, "an act relating to preserving the right to abortion," was introduced in the House on Jan. 22 and referred to the Committee on Human Services.

"I'm fearful that the stage is being set in Vermont to go down that road," Dee said. "This is going to require leadership from you, the diocese and all of us to come together with a strategy because this is orchestrated.

"I think, having spent 30 years in New York, that the church was too quiet," he added.

Coyne said he had read and approved of the bishop of Albany's letter on this and would write his own. "We face a real uphill climb," he said.

One woman who did not identify herself said, "Can I just say — can you men stay out of my uterus?"

"I personally could never have an abortion but I don't think the issue belongs in the legislature," she said. "It's a women's health issue."

Coyne said that as a man he would be more than happy to step aside for women to lead on this issue. "I wish House Bill 57 didn't show up. I wish it went away."

"My concern is, we're going so far, we're in a place now where we're going pass a bill like they did in New York where a child right up to the moment of birth can be aborted," he said. "I can't say anything (about) that?"

State Rep. Mary Morrissey, R-Bennington, a member of Sacred Heart St. Francis de Sales Church, expressed disappointment that the church in the state had not been actively in opposition to the Vermont bill.

After speaking for about 20 minutes at the start of the meeting, Coyne called on more than a dozen of those in attendance, who asked questions and expressed concerns on a wide range of issues. Besides the most controversial, these included the desire for a local Mass in Latin, the need for sound doctrine, a more robust local observance of Divine Mercy Sunday, a married priesthood, and lack of communication within parishes.

Those present who identified themselves were mostly from Sacred Heart St. Francis de Sales Church or its sister parish, St. John the Baptist in North Bennington. A few of these hailed from Christ Our Savior Parish in Manchester.

In his opening remarks, Coyne brought up the ongoing abuse scandal, which is now in the United States focused mostly on revealing abuse cases from last century and the accountability of current bishops who covered up the activities of abusive priests and did not remove them from ministry.

"Initially, I want you to know that we have done a lot of work in the diocese of Burlington and all around the United States the past 16 to 17 years to clean up our act when it comes to the abuse of children and to do everything that we can humanly possible to make sure that this never happens again," he said.

What the U.S. bishops implemented in 2002 was a "zero tolerance" policy regarding priests or church employees. Any with a credible accusation of abuse against them were removed from ministry. When the Diocese of Burlington receives and accusation it checks its records to see if the priest or employee involved was assigned at the place and time alleged and turns the matter over to law enforcement. Only after law enforcement is done does the diocese do its own investigation, he said.

"There's probably not a safer organization, for children, in the state of Vermont, than the Catholic Church," Coyne said. There was been one allegation of abuse in the Diocese of Burlington since 2002 and it was unsubstantiated, he said.

However, the issue remains in the news in Vermont because of ongoing investigations of past abuse at St. Joseph's Orphanage in Burlington and other abuse cases before 2002. The diocese is cooperating with the state attorney general's task force on this. In addition, a committee of laypeople is going through 52 priest files containing past accusations and will issue a report he will publish, Coyne said.

Part of the recent resurgence of publicity on abuse came last year with the public revelation that retired Washington D.C. archbishop Cardinal Theodore McCarrick faced abuse allegations against minors and adult seminarians under his supervision. McCarrick's behavior had been an open secret in church circles for decades.

Coyne himself, when pursuing doctrinal studies as a priest in Rome in 1990 heard from a classmate from the Diocese of Metuchen, New Jersey, about McCarrick's behavior with seminarians. "He would say 'everybody knows that the bishop has his "nephews,"'" Coyne said. "It was well-known."

"So when certain bishops and cardinals got up recently and said 'this was all news to us,' I was saying, 'liar, liar, pants on fire,'" Coyne said.

There needs to be the involvement of lay people "because the bishops can't be policing ourselves," he said. "The future of the church rests in a willingness to set aside clericalism which privileges a certain group of people over others."

"I think clericalism was one of the largest factors, besides the lack of holiness for what happened in the '60s and '70s especially, involving the abuse of children, because that was when the vast majority of the abuse took place," Coyne said.

This dynamic, however, could apply to any organization in which one group is privileged over others and has to be guarded against going forward. "We could end up with a whole new level of clericalism that's around a professional group of lay men and lay women who are running the church."

Various aspects of church membership came up during the town meeting. These included trying to keep young people in the church, things that are done to drive people away from membership and groups of people who do not feel welcome, such as the divorced and remarried and LGBT people.

"I'm wondering if you're considering any efforts toward two, I think, very large communities who feel unwanted in the Catholic Church...divorced Catholics and the LGBT community?" a woman asked.

Coyne said he focuses on Pope Francis's emphasis on accompaniment. "You first welcome, you say all are welcome to be part of what we believe and what we hold as a church." He would not start with doctrinal statements on sexuality. "We're so defined by our 'nos' and what we're not rather than what we are," he said.

The woman pressed him on what specific actions the diocese would take to welcome these groups. "I think the LGBT issue is one that is going to continue to be difficult for us because we are in a culture that is so tolerant and so highly sexualized that it's very difficult to have any kind of a conversation about this in a way that the church's positions on these matters will begin to be heard," he said.

"I hear you — I'm saying that a lot," Coyne said to the woman. "But I'm very sensitive to that, as having a niece who's a lesbian. She and I get along fine but she doesn't, of course, come to church. She has strong opinions on these matters."

Mark Rondeau is the Banner's night editor and religion editor. He can be reached at mrondeau@benningtonbanner.com