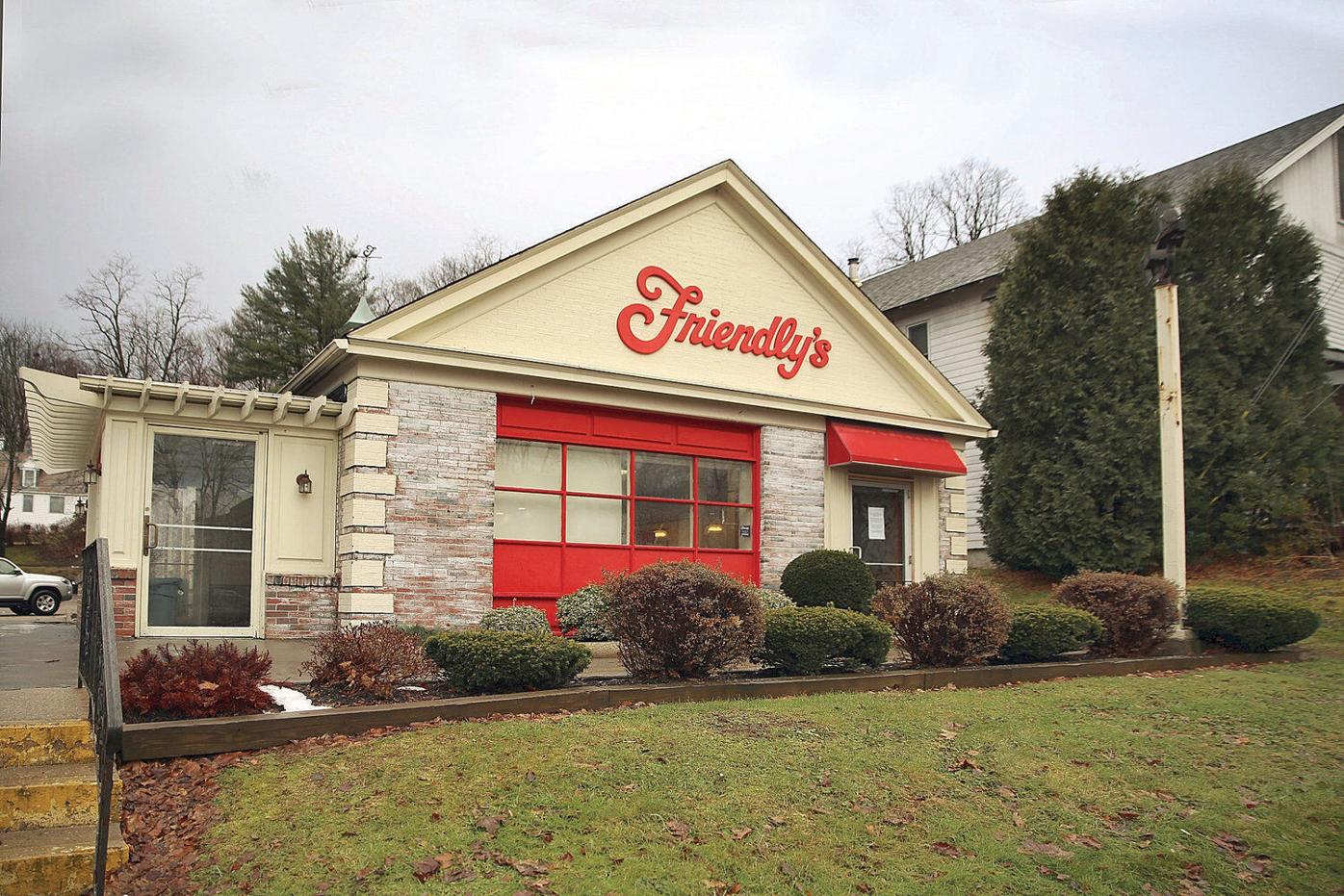 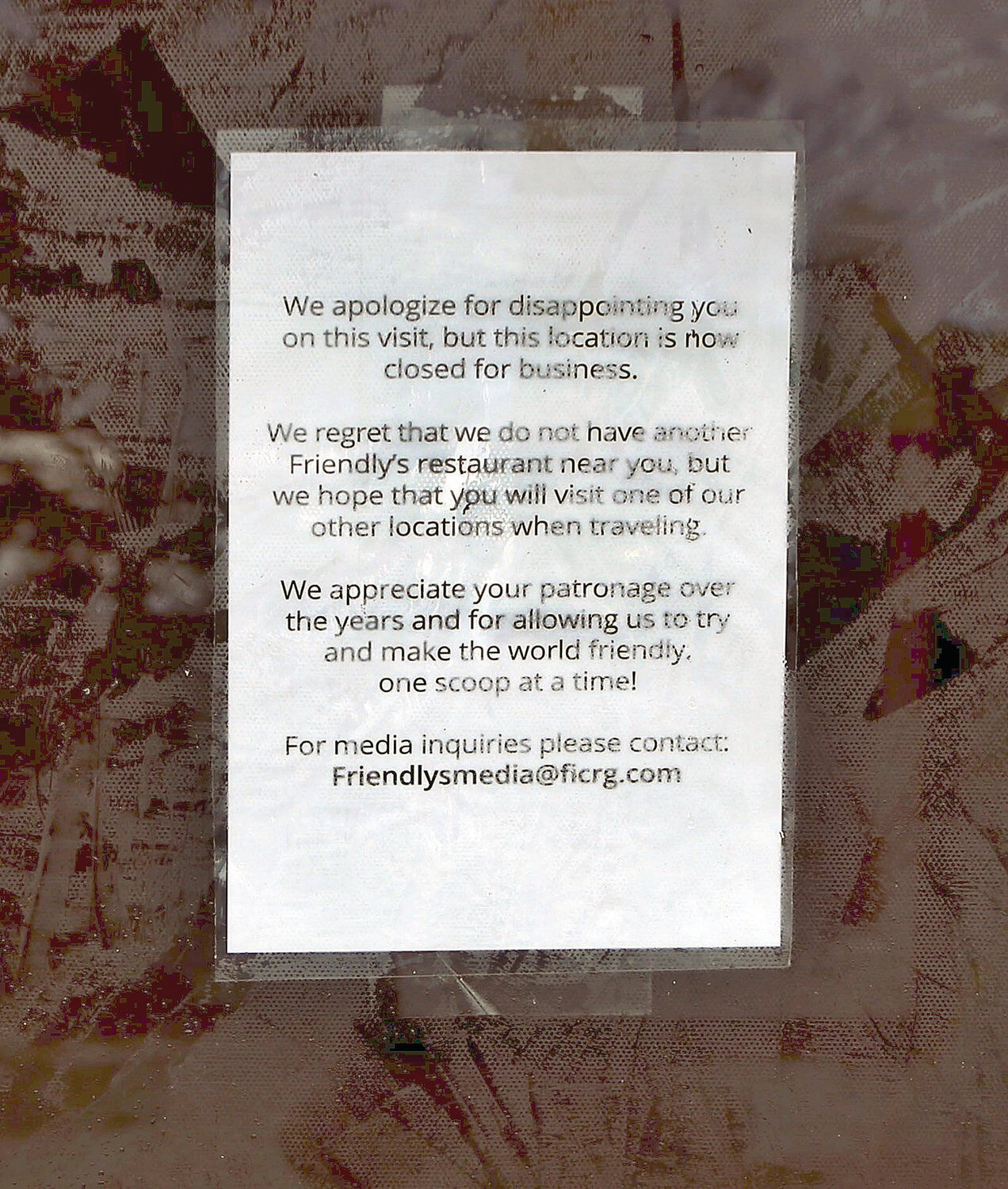 A letter posted on the door of Friendly's on South Street in Bennington announces the restaurant's closing Monday morning.

A letter posted on the door of Friendly's on South Street in Bennington announces the restaurant's closing Monday morning.

BENNINGTON — After 46 years in business, the Friendly's restaurant here served its last meal Sunday night before shutting its doors for good, but the Bennington Downtown Alliance is in discussions to find a restaurant to take its place.

A sign posted on the front door of Friendly's Monday morning read: "We apologize for disappointing you on this visit, but this location is now closed for business. We regret that we do not have another Friendly's restaurant near you, but we hope you will visit one of our other locations when traveling. We appreciate your patronage over the years and for allowing us to try and make the world friendly, one scoop at a time!"

Friendly's Public Relations Manager Bill Chiccarelli confirmed the Sunday evening closure of the Bennington location, as well as the Rutland location. He explained that restaurants close as a "normal part of business as a result of lease situations or too many locations in one trade area," but said he does not know the specific reason for these specific closures.

Friendly's will provide short-term financial assistance "in lieu of notice" for employees who desire to find new job opportunities in the area, Chiccarelli said. Also, some local managers and team members are being transferred to Friendly's locations in Pittsfield, Massachusetts and Troy, New York. "While it's never good news to see a business close, we know the Friendly's corporation has been struggling for many years, so it doesn't come as a real surprise," said John Shannahan, executive director of the Bennington Downtown Alliance. "Whenever there is an unfortunate situation you try to make the best of it and we've already begun discussing other alternatives for that location."

Shannahan says that as a downtown organization, the BDA always favors locally-owned establishments, so the long-term goal is to get the Friendly's location on South Street reoccupied with another type of establishment. He says the alliance has hoped for a long time to get an ethnic restaurant downtown, so that will be the ultimate goal, if possible.

Those with gift cards to Friendly's can still use them at more than 200 Friendly's locations up and down the East Coast, Chicarrelli said.

Friendly's is the second restaurant to close in Bennington during 2018, following the shuttering of the Bennington Station restaurant in March.

The Friendly's restaurant in North Adams, Massachusetts closed abruptly over a weekend in November 2014 after being open since 1962. Locations in Pittsfield and Greenfield, Massachusetts, and Troy, New York, remain open.

"We appreciate the patronage of our neighbors in [Bennington and Rutland] over the years and for allowing us to try and make the world friendly, one scoop at a time," Chicarrelli said.

Shannahan described the difficulty of finding locations in downtown Bennington for new restaurants interested in setting up downtown, but said the BDA is excited for this opportunity.

"There are many other restaurants downtown that serve breakfast, lunch, and dinner, that will benefit from this style of restaurant closing," Shannahan said. "It also provides opportunities for those places to perhaps add to the products they offer to attract the crowd that used to go to Friendly's."