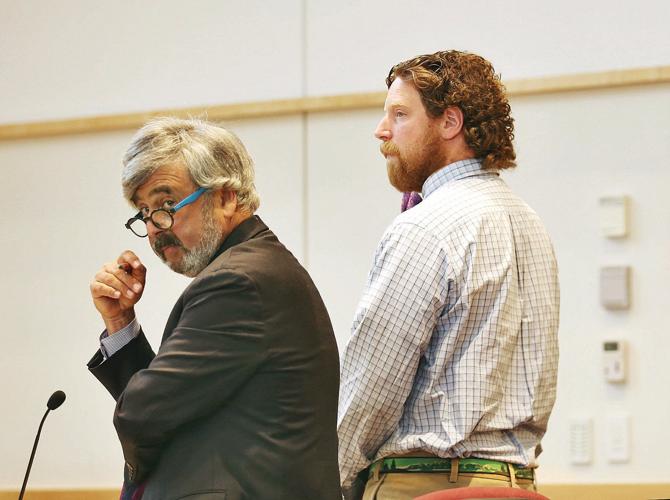 Defense attorney Brad Myerson looks back at the gallery while in court Friday with Jason Pergament, a Burr and Burton Academy faculty member who pleaded guilty to two counts of unlawful mischief and one count of disorderly conduct. 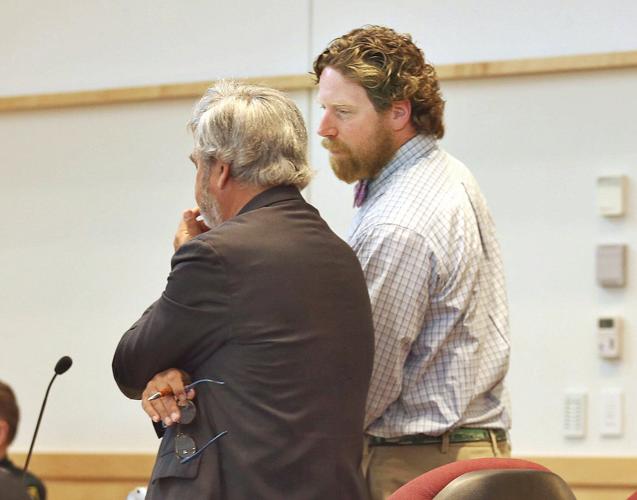 Jason Pergament, a Burr and Burton Academy faculty member charged with damaging property and screaming at teenagers who were having a drinking party at his property, confers with his lawyer at the courthouse in Bennington on Friday. 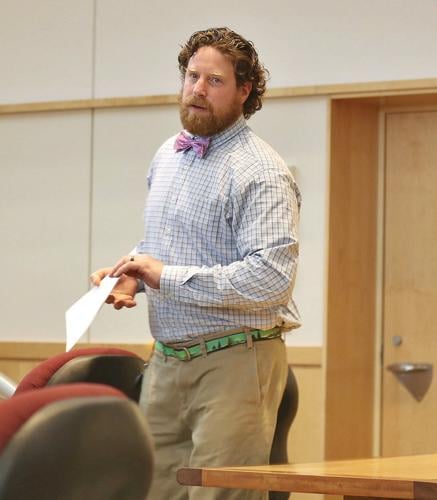 Defense attorney Brad Myerson looks back at the gallery while in court Friday with Jason Pergament, a Burr and Burton Academy faculty member who pleaded guilty to two counts of unlawful mischief and one count of disorderly conduct.

Jason Pergament, a Burr and Burton Academy faculty member charged with damaging property and screaming at teenagers who were having a drinking party at his property, confers with his lawyer at the courthouse in Bennington on Friday.

BENNINGTON - The head of a student program at Burr and Burton Academy was sentenced to a year's probation Friday after pleading guilty to damaging two vehicles, as well as screaming at teenagers when he discovered them partying at his house.

Judge William Cohen, of the Bennington County Superior Court, sentenced Pergament under the terms of his plea agreement with the Bennington County State's Attorney's Office. The judge handed down a suspended prison sentence of six to 12 months and probation for a year on each count of unlawful mischief. The sentences would run at the same time. Pergament was also fined $500 for disorderly conduct.

On the night of Oct. 20, the court was told, Pergament was watching a movie in Manchester with his fiancee when he received a call from the Manchester Police Department. An underage drinking party had been reported at a property he was renting out on Smiths Hill Road in Manchester.

He didn't want to get involved, but went at the police's insistence, said defense attorney Brad Myerson.

When he arrived at the house and saw all the cars and police officers, "he lost it," Myerson said.

At the house's back porch, he screamed profanities at several teens gathered there, including: "You are lucky all these cops are here, or I'd drag your asses out of this house," "Do you need me to swing at you right now?" and "Shut the (expletive) up."

A body camera recording from that night, provided to the Banner by the Winhall Police Department, showed Pergament screaming at the teens and smashing what was later described as an iPhone while law enforcement officers watched.

Some officers then started discussing evidence that he had dented several vehicles in the driveway and broken a taillight.

"Stop talking to the kids," the officer with the body camera said while approaching Pergament. "I already saw what you did in the driveway. It's unacceptable. I don't care how mad you are ... It's not my town, but if it was my town, you'd be coming with me right now."

The footage captures numerous plastic cups by a counter, as well as bottles of alcoholic beverage.

Pergament expressed surprise he could be cited to appear in court when he acted on his property after people had "broken into" his house.

He admitted losing his temper, but said he was hurt by the behavior of the teenagers, a group he was trying to help through his work.

"I just hope you understand this is not indicative of my overall character," Pergament told one officer. "If I have to go to court and explain myself, I will."

In court on Friday, the prosecutor said Pergament has no criminal record, but his behavior was "entirely unacceptable." This was especially since he is an educator and should be better equipped to deal with difficult situations involving juveniles.

Pergament originally faced two felony charges of unlawful mischief, but they were reduced to misdemeanors in accordance with his plea agreement.

The state also dismissed his two other initial charges of unlawful mischief for allegedly damaging a third car and smashing an iPhone. But Pergament agreed to pay restitution to the property owners.

"I take full responsibility for my actions," Pergament told the judge after pleading guilty Friday. "I'm working on bettering myself so I can move forward in a positive way."

Myerson said his client had been suspended from his job for a week and is now on probation. He has paid back the owners of the damaged Volkswagen and Subaru, completed an anger management program, as well as apologized to fellow Burr and Burton faculty members and the administrators of schools that send students to BBA.

Myerson declined to comment when approached after the hearing.

Burr and Burton, in response to questions from the Banner, said it will continue to employ Pergament despite his criminal conviction. Since 2013, he has been director of the school's Student Success Program, which supports students aspiring to be the first in their family to attend college.

"Mr. Pergament has done superb work with students, and we want to give him the opportunity to rebuild trust and demonstrate his own personal growth," BBA Headmaster Mark Tashjian said in an email.

Besides being placed on administrative leave, Pergament also was formally reprimanded and evaluated professionally to ensure he could work safely in a school environment, Tashjian said.

When asked about the duration of Pergament's probationary status, the headmaster said Pergament understands "we cannot have another instance of significant misjudgment. That expectation lasts indefinitely."

The conditions of his court probation, meanwhile, include Pergament's not engaging in violent or threatening behavior, such as vandalism and verbal threats.