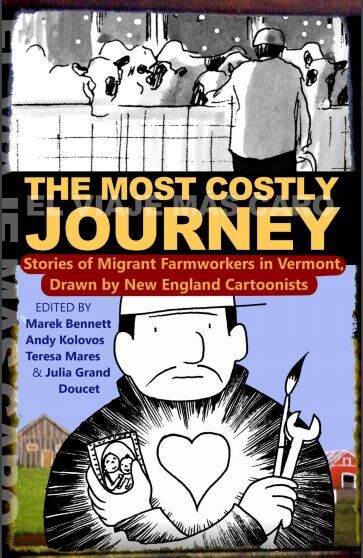 The cover of “The Most Costly Journey” 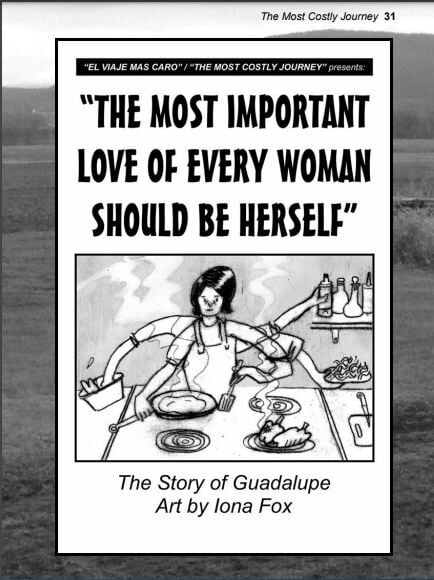 The title of page of Guadalupe's story in “The Most Costly Journey.” 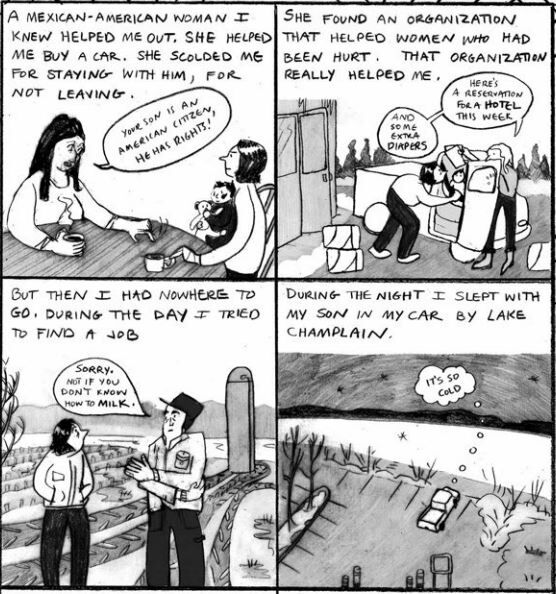 Comic panels from Guadalupe's story in “The Most Costly Journey.” 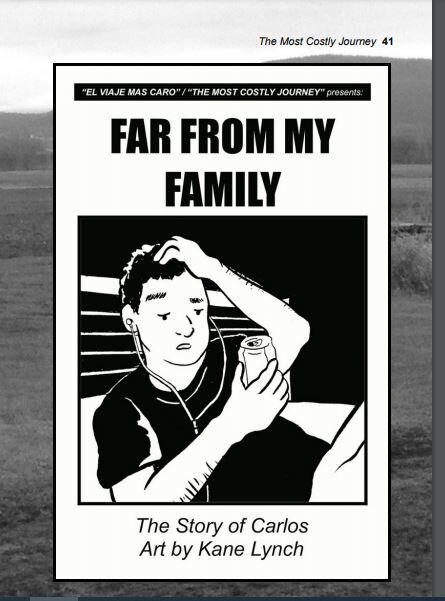 Title page of The Story of Carlos in “The Most Costly Journey.” 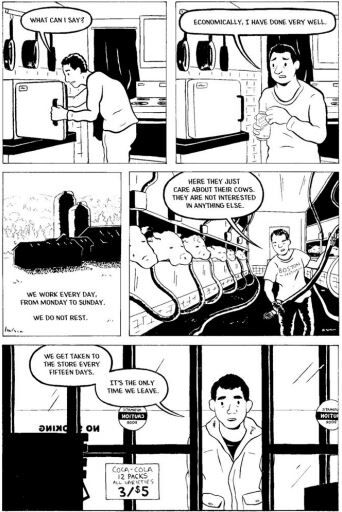 Comic panels from The Story of Carlos in Comic in “The Most Costly Journey.” 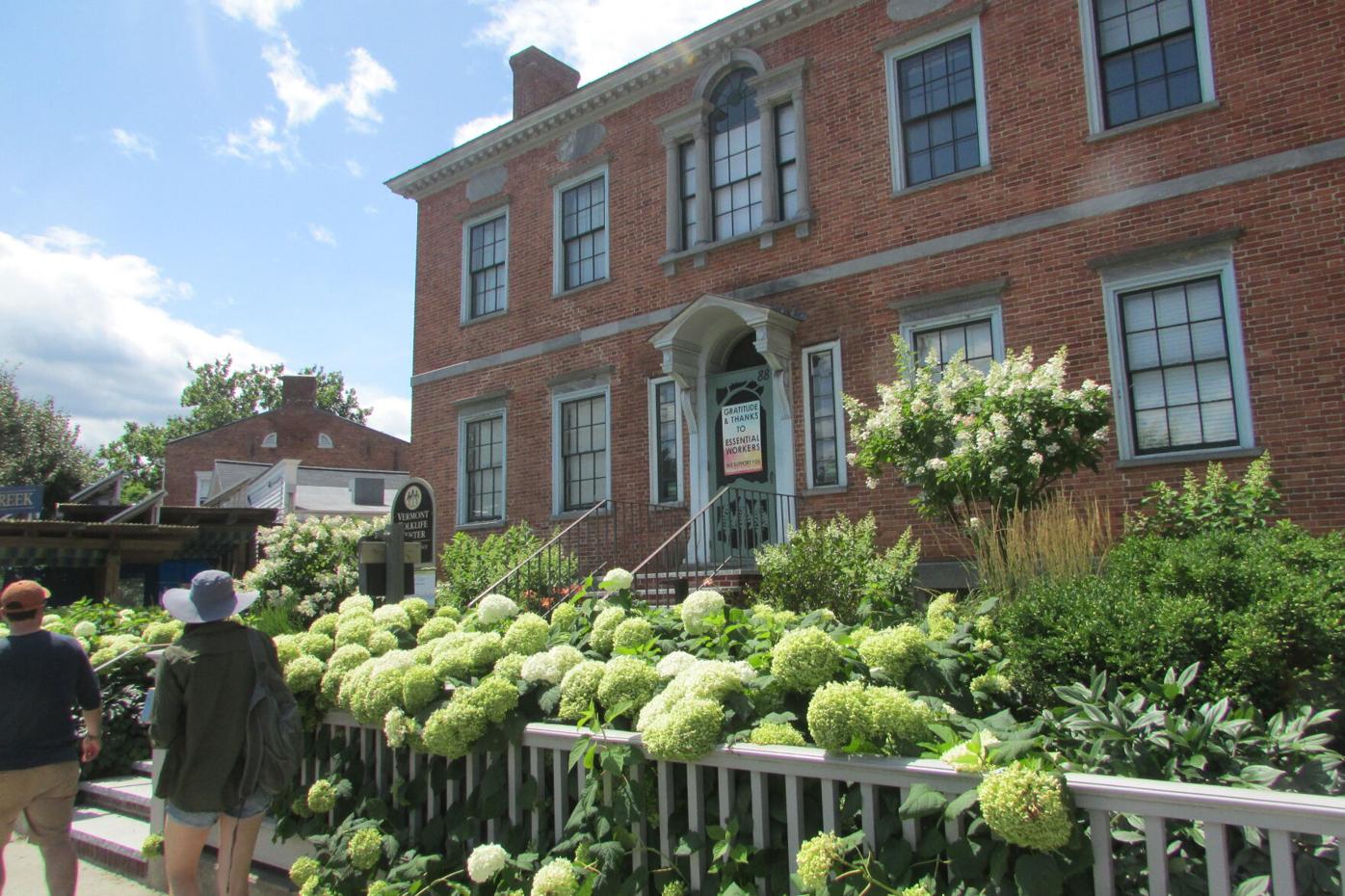 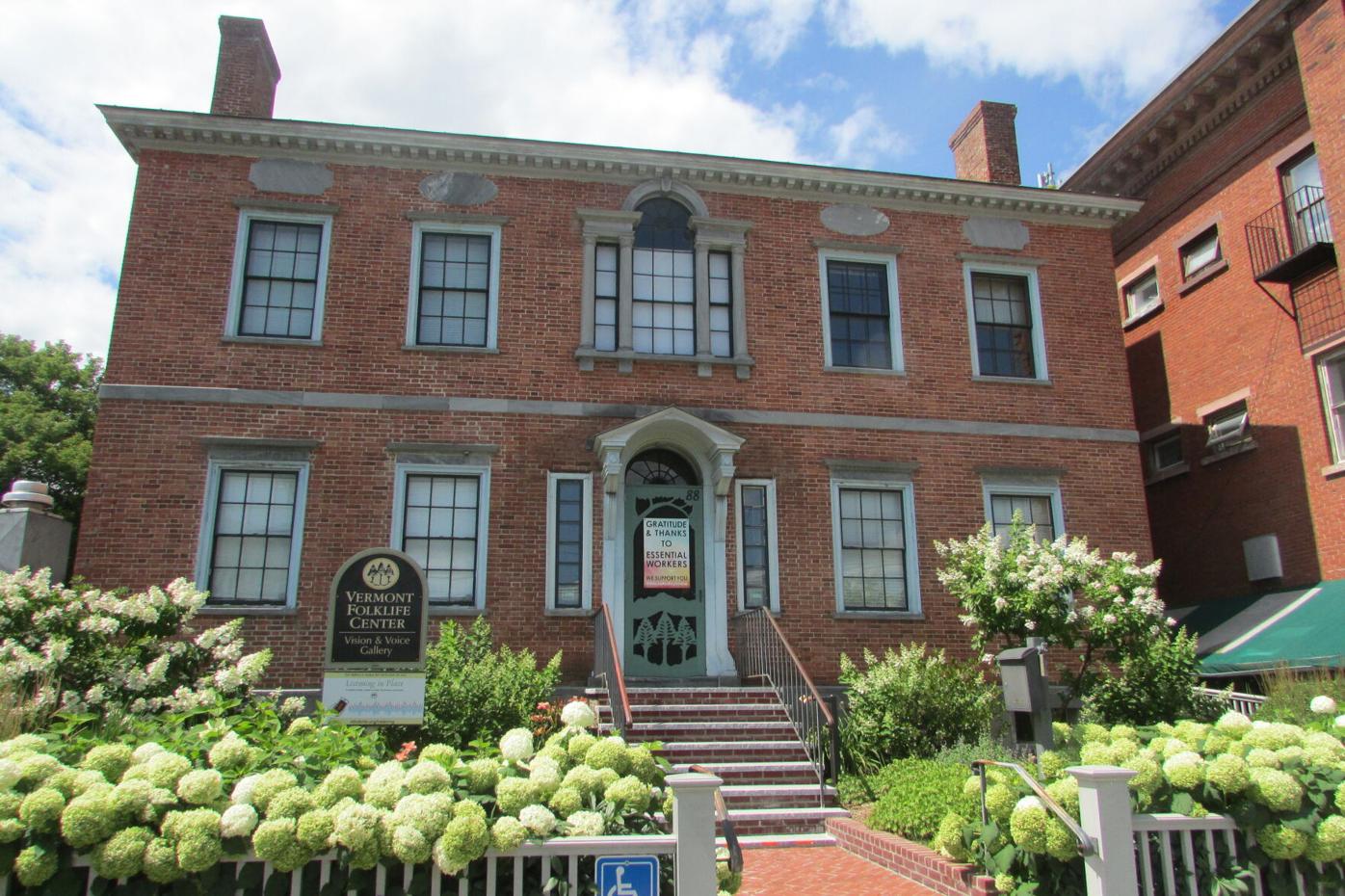 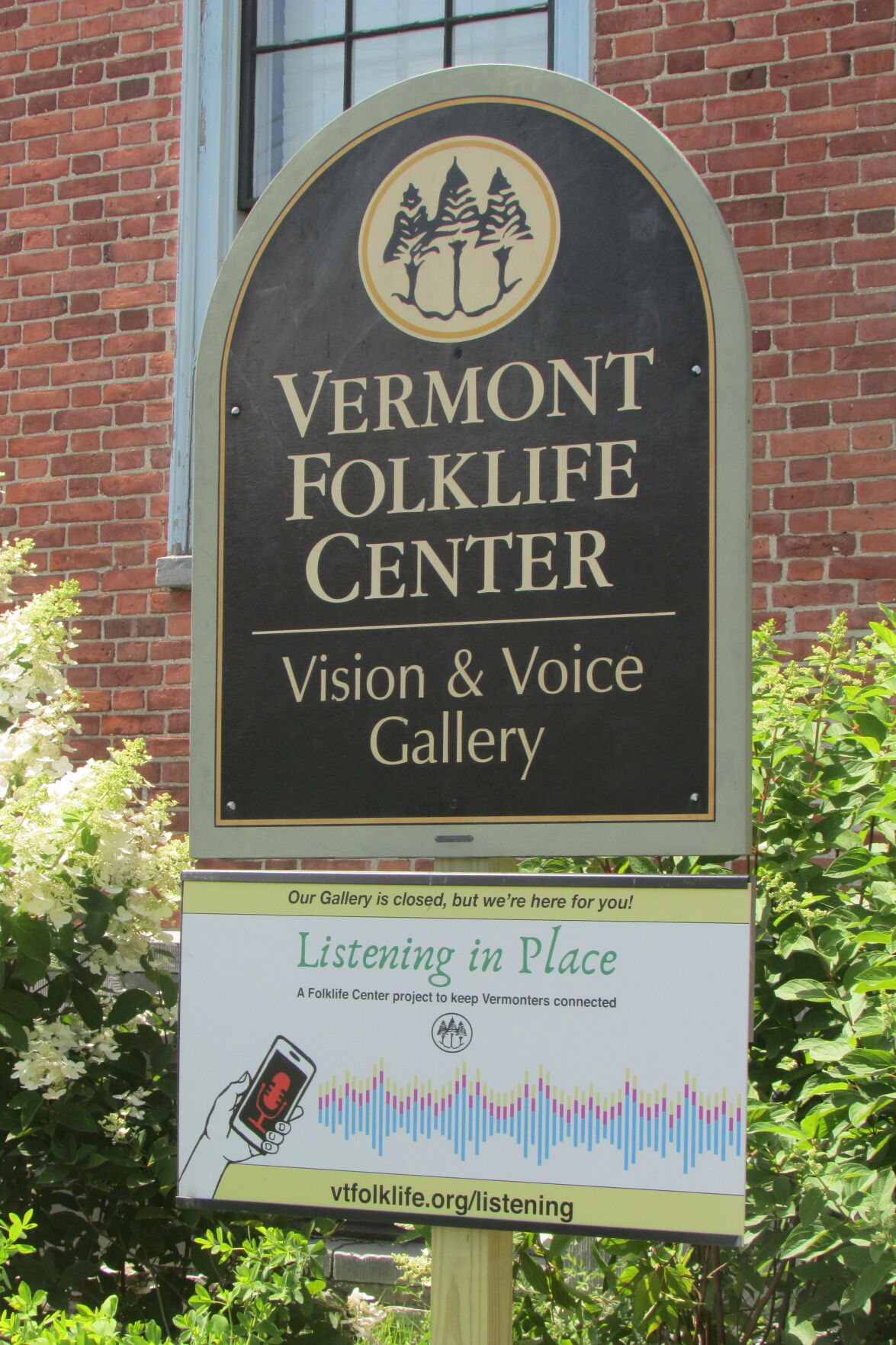 The sign at the Vermont Folklife Center on Main Street in Middlebury.

The cover of “The Most Costly Journey”

The title of page of Guadalupe's story in “The Most Costly Journey.”

Comic panels from Guadalupe's story in “The Most Costly Journey.”

Title page of The Story of Carlos in “The Most Costly Journey.”

Comic panels from The Story of Carlos in Comic in “The Most Costly Journey.”

The sign at the Vermont Folklife Center on Main Street in Middlebury.

MIDDLEBURY -- The mission of the Vermont Folklife Center is to document, sustain and present Vermont’s diverse cultures.

“What that really means is that we’re working to make Vermonters more visible to one another,” says Kate Haughey, the center’s executive director, in a video on the organization's website. "We’re all about trying to understand people’s experiences from their own perspectives and on their own terms. “

“The Most Costly Journey” -- El Viaje Más Caro in Spanish -- is such a project aimed at increasing this mutual visibility. The center recently published this new non-fiction graphic anthology telling the stories of Latin American migrant farmworkers working in Vermont, drawn by New England-based cartoonists. The book includes 19 stories about the harrowing journeys people make to arrive in Vermont, and what it is to survive once they’ve gotten here.

Andy Kolovos, associate director and archivist with the center, a graduate of Bennington College and one of the editors of "The Most Costly Journey" explained the origins of the comics project. Health care workers with the Open Door Clinic in Middlebury noticed several years ago that farmworkers were suffering from mental health issues. In numerous cases, they manifested physical symptoms with psychosomatic causes.

Discussions of the situation led to the idea that comics, which are popular in the immigrants' countries of origin, would be an effective means to talk about these issues. Each booklet was based on an actual interview with an immigrant. According to the Afterword of the book, co-written by Kolovos and Teresa Mares, of the University of Vermont, the comics are being distributed by health workers conducting site visits to farms in Addison and Franklin Counties, and to clients at the Open Door Clinic. A team of healthcare professionals are developing more curriculum and other materials based on the comics for use in outreach.

Though the primary aim of the comics was to reach and help the farmworkers, those involved found an important secondary purpose of the effort: "that of educating the broader public about the daily lives of farmworkers and structural violence and vulnerability that this population experiences," Kolovos and Mares write in the Afterword. "This book represents our attempt to realize this second goal."

Around 1,000 to 1,200 migrant workers from Latin American work in Vermont's dairy industry. "Given the few legal pathways for immigrant workers who are looking to work in this industry, it is estimated that more than 90% of these farmworkers are undocumented," Kolovos and Mares write.

Versions of the comics have been used in public school and university classrooms by instructors of classes in Spanish, geography, food systems, anthropology, literature, and social studies.

Kolovos said a Kickstarter fundraising effort will soon begin to fund publication of the the book in Spanish. The aim is to publish it by the end of the winter.

“The Most Costly Journey” is 252 pages. It is a collaboration between the Open Door Clinic, Vermont Folklife Center, UVM Extension Bridges to Health, UVM Anthropology, and Marek Bennett’s Comics Workshop.

It includes a preface from Julia Grand Doucet, outreach nurse at the Open Door Clinic, who writes about her original encounters with farmworkers manifesting symptoms stemming from chronic stress and anxiety.

"We sought out stories that encompassed the common themes we saw reflected in the population: traumatic journeys, family separation, community alienation, and as importantly, the positive and negative coping skills used to navigate these challenges," she writes. "With each telling of each story, we noticed a change in the storyteller. A sense of relief and of letting go accompanied their revelations. For some, it was the first time that they had given words to their experiences."

One of the comics , "Far From My Family," tells the story of Carlos, who is from Mexico. He plays the guitar and watches videos of the days when his family performed as a Christian music band. He does well economically in Vermont, which enables his family in Mexico to start an egg farm, but he also drinks to ease the loneliness he feels. He has been on three farms and lost three jobs due to drinking. He cut his hand while drunk and couldn't work for two months. He feels anguish over missing his daughter's quinceanera.

“We are here every day doing the same thing," he says. "Sometimes we cannot stand it. With alcohol, sometimes, I can forget about work.”

The migrants work seven days a week. The only time they leave the farm is to be taken to a store every 15 days

"Here they just care about their cows," Carlos says. "They are not interested in anything else."

Guadalupe's story is titled "The Most Important Love of Every Woman Should be Herself." It is illustrated by Iona Fox, who is originally from Bennington, Kolovos said.

Guadalupe's father, who was in North Carolina, paid $4,000 for her to be brought from Vera Cruz into the United States by car. They changed cars every 10 to 15 hours and there was no chance to eat or use a restroom. She manages to find work without papers or knowing English. Her father returns to Mexico. At 29 she has a son and eventually joins the baby's father in Vermont. He became extremely abusive, however.

On her own with her young son, she gets a job taking care of calves when some of them die and she loses her job. She lives in the attic of an old farmhouse in Shoreham, cooking and cleaning for a couple who boss her around and don't pay her, and experiences other unsatisfactory arrangements in rural Vermont. At one point she spends nights with her son in a car parked by Lake Champlain. Then a friend suggests to Guadalupe that she start cooking for people. She gets a driver's license, buys a truck, rents a room at a farm and begins to sell food. From this point, her life starts turning around. By the end of the story, she is happily married.

“People think that crossing the border is the hardest part, but the worst part is finding a way to survive after you arrive,” Guadalupe says. “I would like my story to help other women. It doesn’t matter all the obstacles one faces in life. There is always light at the end of the tunnel.”

“The Most Costly Journey” is just one of numerous projects of the Folklife Center of Vermont, which is headquartered in a stately brick building on Main Street in Middlebury. Just published is another non-fiction comics anthology, “Turner Family Stories: From Enslavement in Virginia to Freedom in Vermont.”

This is adapted from oral history recordings with Daisy Turner of Grafton, held in the Vermont Folklife Center Archive. Turner, born in Grafton in 1883, was the daughter of formerly enslaved Alec and Sally Turner, who settled there in the years following the Civil War. In 1983 VFC founder Jane Beck met then 100-year-old Daisy and worked with her to record approximately 60 hours of interviews through which Daisy recounted the saga of several generations of her family.

After being closed during the COVID-19 pandemic, the gallery of the Middlebury headquarters will reopen beginning Sept. 8, Wednesday through Friday, from 11 a.m. to 4 p.m. Featured will be an exhibition, which up to now has only been available on the center's website, PRIDE 1983.

“Through archival documents and ephemera, audio interviews and photographs Pride 1983 explores the origin and lasting legacy of Burlington, Vermont’s first Pride celebration on June 25, 1983.” The exhibition will run through March. Then it will be shown around the state, Kolovos said.