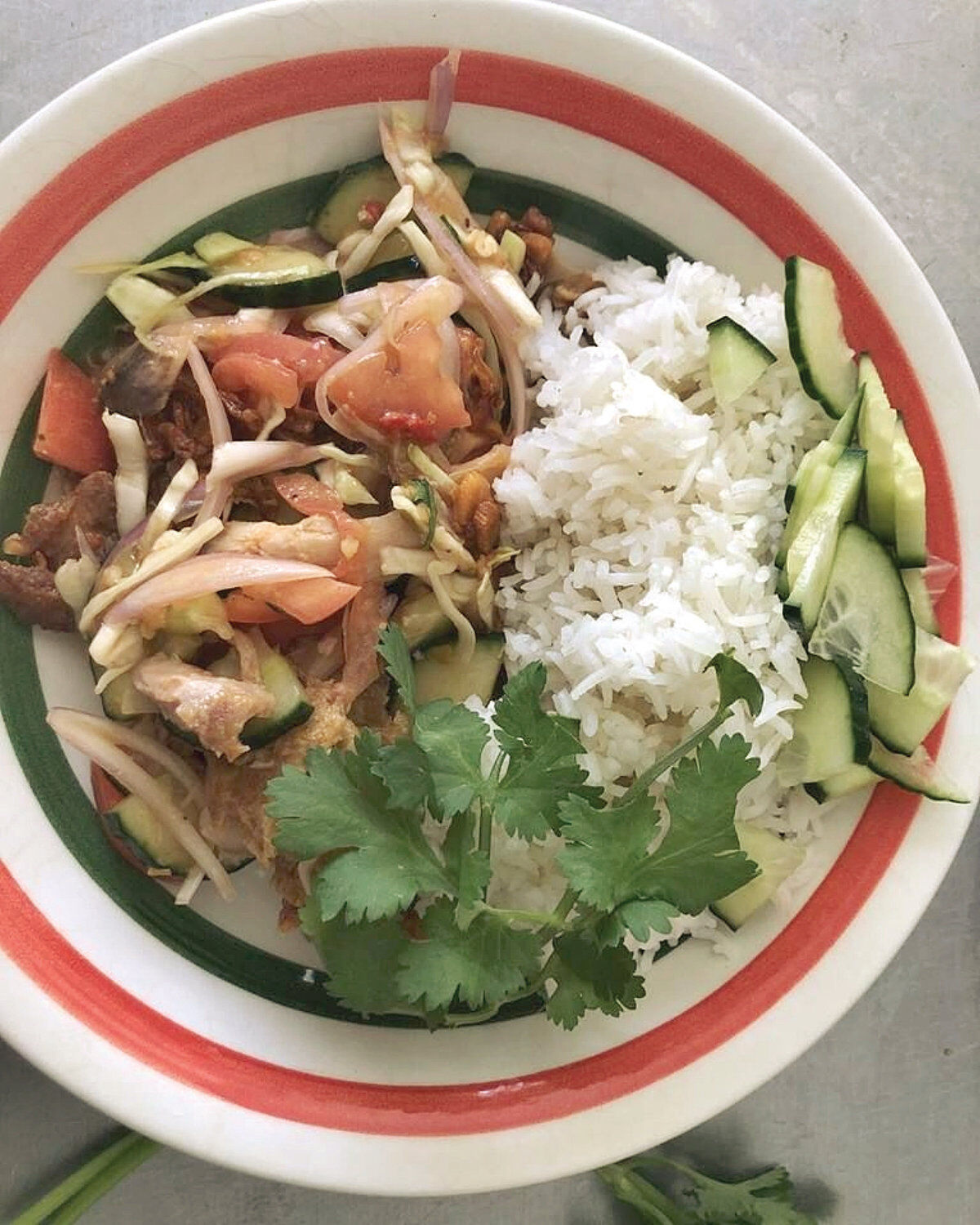 The fried chicken salad at Moonwink offers a contrast of bright, spicy and savory flavors in the restaurant's special tamarind dressing. 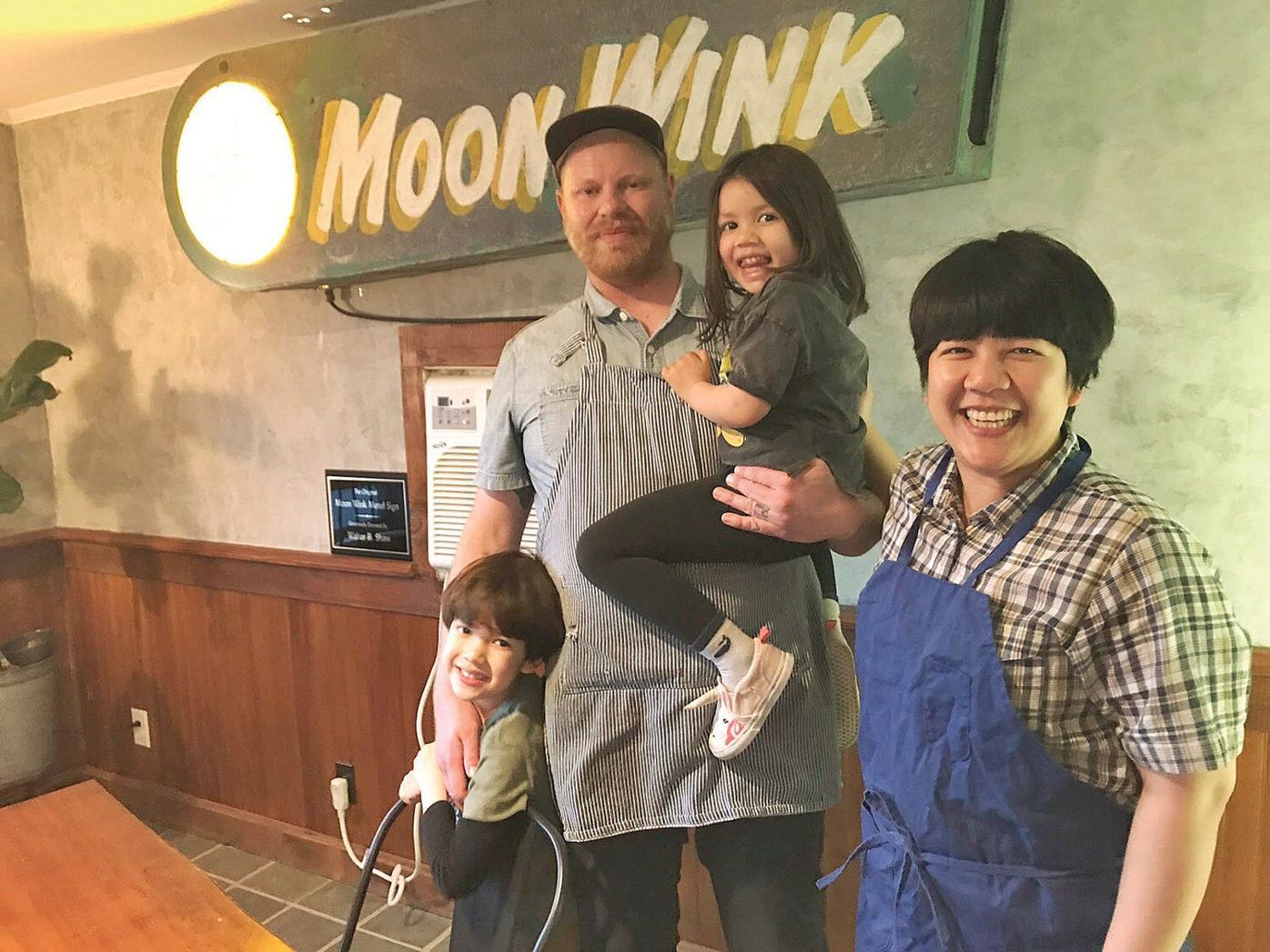 Wes and May Stannard, seen with their son Ernest and daughter Ada, offer the deep flavors of Burma at Moonwink in Manchester.

The fried chicken salad at Moonwink offers a contrast of bright, spicy and savory flavors in the restaurant's special tamarind dressing.

Wes and May Stannard, seen with their son Ernest and daughter Ada, offer the deep flavors of Burma at Moonwink in Manchester.

MANCHESTER — The story of how the only Burmese restaurant in Vermont landed in Manchester begins as many things do in life — as a love story.

That love brought together a native of Burma and an eighth-generation Vermonter, each of whom had moved to New York City to pursue their dreams.

They found each other, got married, started a family, and moved back to Vermont, where a chance sighting of an old hotel sign in nearby New York gave their new restaurant a distinctive name to describe their distinctive cuisine.

"Some of the best authentic Asian food you'll find in rural New England," the travel website Lonely Planet says of the restaurant at 4479 Main St. in Manchester Center.

In less than a year, Moonwink has drawn tourists and loyal locals alike to sample an Asian cuisine that's hard to find in New England.

The closest Burmese restaurant appears to be in Boston, three hours away.

"I stop by four to five times a month," said Boris Kojic, who works in Manchester. "It's great food with a different taste I enjoy."

"I love the open space where I can see them preparing my food," said Sarena Barausky, an East Dorset resident. "They have nothing to hide, and the smells are wonderful."

The menu features a variety of salads, stews, curries and noodle dishes, and a rotating roster of daily specials, all hand-prepared fresh by May Stannard and her husband Wes Stannard.

The menu offers plenty of vegetarian and gluten-free options.

The best way to describe Burmese food is through the country's geography, the couple said.

"On one side you have Thailand with its heavy use of ginger, lemongrass, fish sauces and curry pastes," Wes Stannard said.

Adds May Stannard, "Our cooking is also influenced by our borders with China and India. The result is food less spicy or sweet than Thai, but with a variety of tastes and flavors."

It's a regular special and a popular one. There's a somewhat smoky, but not overpowering heat in the sauce that marries the dish's contrasting textures and flavors. It's light but satisfying, spicy but sweet, comforting and crunchy. It grabs your attention and keeps it.

That's the sort of food May Stannard remembers from home.

"My earliest memories are of my grandmother and mother cooking," she said. "Fresh food with multiple layers of spices and ingredients."

May Stannard, nee Oo Khaing, had left her family home of Bago, Burma, to follow her dream of working abroad in the fashion industry. She studied in Singapore and Dallas, before making her way to Brooklyn. A relative helped her get a job as a gemologist, working with emeralds in New York City's diamond district.

That's where she met Wes Stannard, an eighth-generation Vermonter who had graduated from Boston's Berklee College of Music and headed to Brooklyn. He found work as a jack-of-all-trades at Rick's Picks, an award-winning artisanal brand of pickles, working in operations, distribution and retail at farmers markets.

The couple met in typical Brooklyn fashion: on a dating app. They talked by phone for months before they finally decided to meet, and once they did, it was magic.

They married twice, in a civil ceremony at City Hall and, later the same day, at a Buddhist temple.

They both loved food, so much so that May Stannard began working part-time as a chef in one of their favorite Brooklyn haunts, The Purple Yam.

"I always liked doing things with my hands," May Stannard said. "It was sewing that sparked my interest in fashion. Cooking was another outlet to express my manual creativity. I found out later in Vermont that quick hands also help when taking ticks off a dog."

"We traveled frequently to Albany to shop at the Asian food market," she said. "At some point on the many drives along New York Route 7, we noticed a rundown motel with a weathered sign — Moonwink."

The restaurant name was never an issue.

"My dad [Bob Stannard] conducted research to find the owner of the Moonwink motel," Wes Stannard said. "Walter Shaw was alive and well at 91 years old."

The couple, friends and family spent the next six months renovating, creating an open and casual space.

May Stannard painted one wall with a Burmese mural, illustrating the importance of family and food.

The sign, given to the couple by Shaw, was repainted and rewired, and it now illuminates the inside of the restaurant.

"When I saw the Moonwink sign, I saw the M and W," says May Stannard. "To me, it stands for May and Wes."