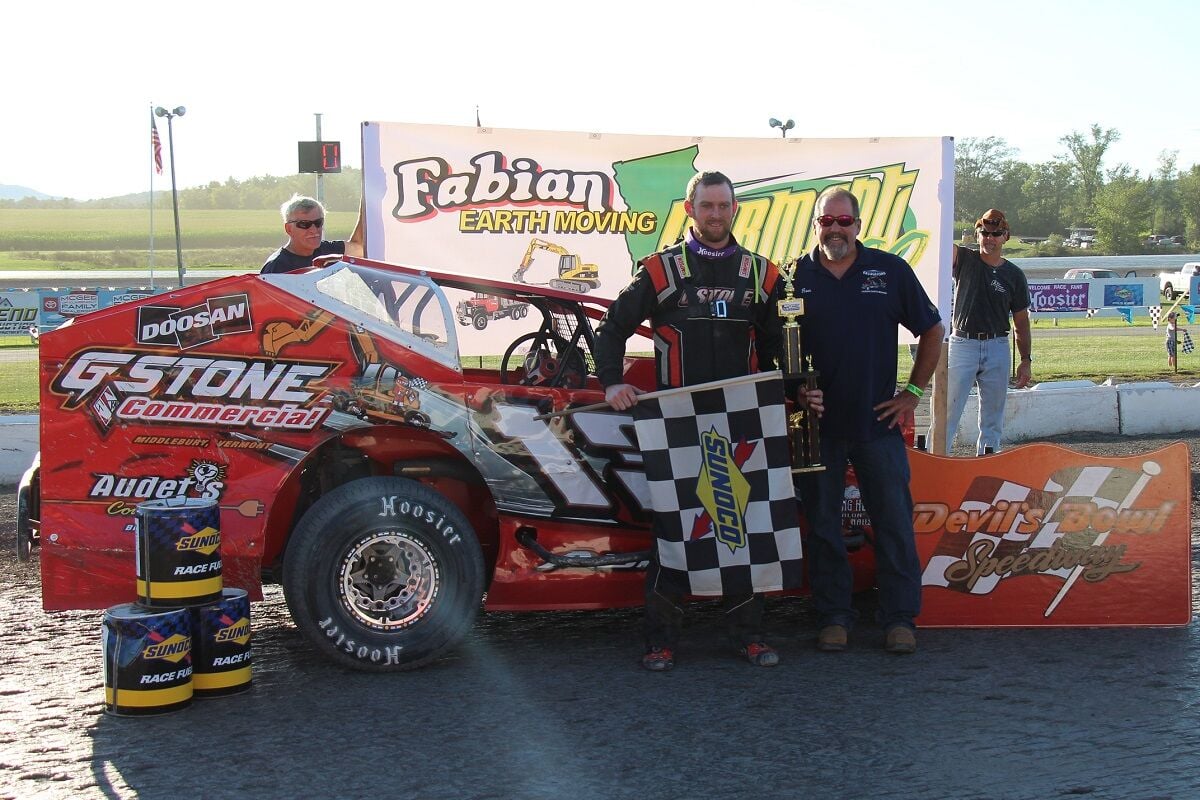 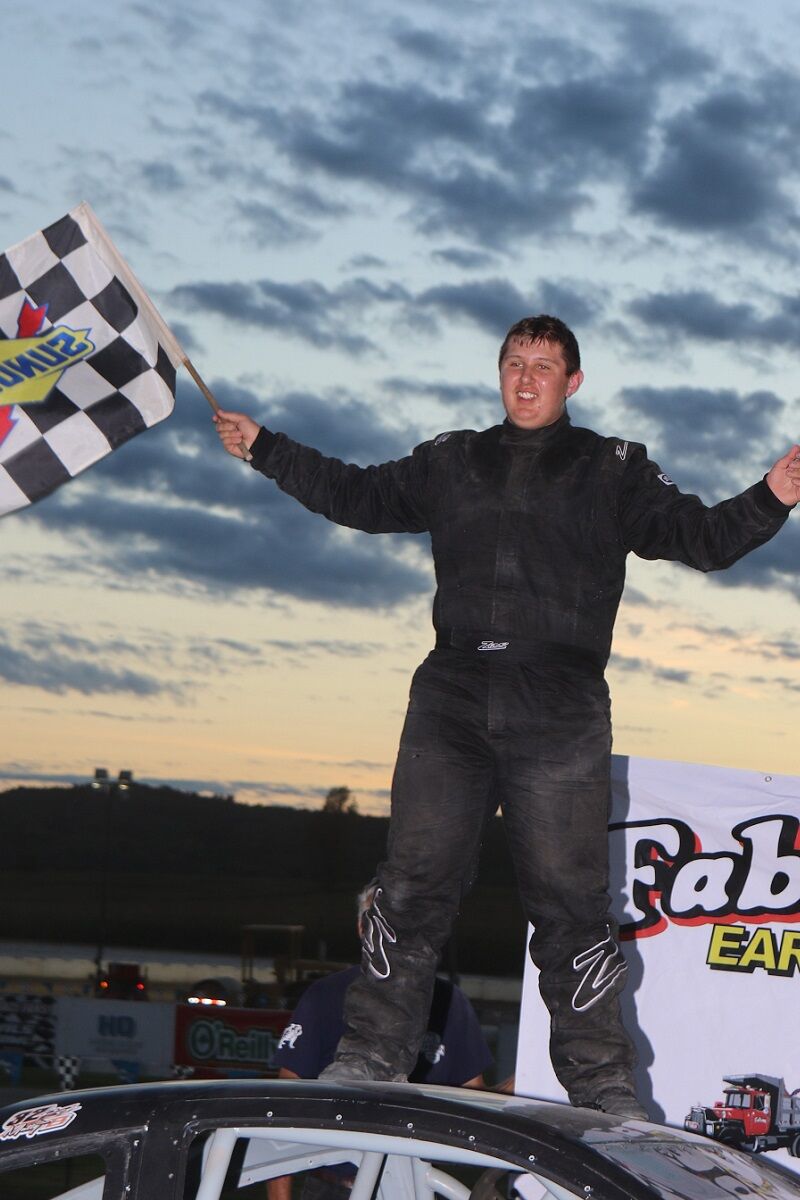 Audet had already won three times in the O’Reilly Auto Parts Limited Sportsman feature before Saturday’s afternoon special and held the championship point lead entering the day. His drive from 18th starting position was worthy of praise on its own, but the added pressures of the Vermont 200 starting spot, a $500 winner’s purse, and having to battle rising star Dylan Madsen tooth-and-nail for the win never got to Audet, and he earned a popular victory with the home-track crowd.

The ultra-competitive 40-lap race seemed to have three distinct parts, defined by caution periods. John Gosselin and Bill Duprey headlined the opening act, pacing the field for the first dozen laps. In the second stanza, Madsen – who started 13th – caught the leaders by surprise after a restart to take over on lap 14 and seemed to have the win in hand. Audet entered the picture to open the closing portion by stalking and then passing Madsen on the tricky, dry-slick outside lane with five laps left, and then the pair squared off on three successive restarts on lap 37.

Audet chose the inside lane for each restart, taking away Madsen’s preferred groove. Madsen, the champion at Orange County Fair Speedway and the point leader entering the season finale at Albany-Saratoga Speedway, settled for the runner-up spot. Beau Reeeves finished third after starting 15th, followed by Anthony Ryan from 14th and Randy Ryan from 21st.

The top 10 was completed in order by Craig Wholey, Dakota Green, Steve Pope, Evan Roberts, and Alex Layn. Qualifying heats were won by Duprey, Layn, and Madsen, while Roberts won the consolation race. Audet opened up his unofficial point lead to 26 markers over Austin Comes, 788-762.

Bristol’s Josh Masterson was a first-time dirt winner in the Sportsman Modified division, taking the annual non-points invitational feature for non-winners. Masterson was a champion in the Late Model and Mini Stock divisions on the former asphalt track at Devil’s Bowl and won 25 races, and Saturday’s score came five years and one day after his last victory. Masterson started on the front row and led all 25 laps of the caution-free race.

Kevin Chaffee won a good battle with Brian Whittemore for the runner-up position. Travis Witbeck finished fourth in his first Devil’s Bowl start of the season, and Justin Comes took fifth in his first outing in a new car owned by Terry Rouse. Neil Stratton, Anthony Warren, Alex Bell, Billy Lussier, and Johnny Bruno were next in line. Heat wins went to Whittemore and Masterson.

Chris Murray hit double digits in the Super Stock division, winning for the 10th time in the 2021 season. The Fair Haven racer came out of some intense three-wide action with the lead on lap 7, and then held off Andrew FitzGerald on two restarts for the win. FitzGerald took the runner-up spot, while Paul Braymer rebounded from a flat tire and later a spin to take third place. Jim McKiernan and Chuck Bradford were fourth and fifth, respectively. Murray and FitzGerald won the heats.

Daryl Gebo won for the fifth time in his rookie season in the 20-lap A-Feature for the Mini Stock division. The racing was fun and frantic, spread out three- and four-wide for much of the distance. Gebo took the lead from Griff Mahoney on lap 8 and held serve for the rest of the race, fending off Chris Sumner for the win. Derrick Counter beat Craig Kirby by inches for third place, with T.J. Knight fifth. Adam Mahoney was sixth, followed by Ronnie Alger, Jake Barrows, Brian Blake, and Scott Chandler. Knight, Gebo, and Sumner won the heats.

Rookie Chase Allen was a first-time winner in the 10-lap B-Feature for the Mini Stocks. The 15-year-old Fair Haven racer got out front on the third lap and held off the charges of veteran Willie Rice for the win. Jake Mallory finished third ahead of Donald Olden and Chris Hewitt.

The Friend Construction 500cc Mini Sprint division opened its two-day, event with the first of three 10-lap segments. Poultney’s John Smith won to score one point toward the overall, cumulatively scored tally. Roger LaDuc finished second for two points, followed by Ray Hanson, Vern Woodard, and Kaidin White. The lead-lap cars will be inverted to start the second segment on Sunday, followed by another inversion for the third leg; the driver with the lowest overall score after the three segments will be winner. LaDuc and Smith won the qualifying heats.

The results from Sunday’s races were not immedaitely available.