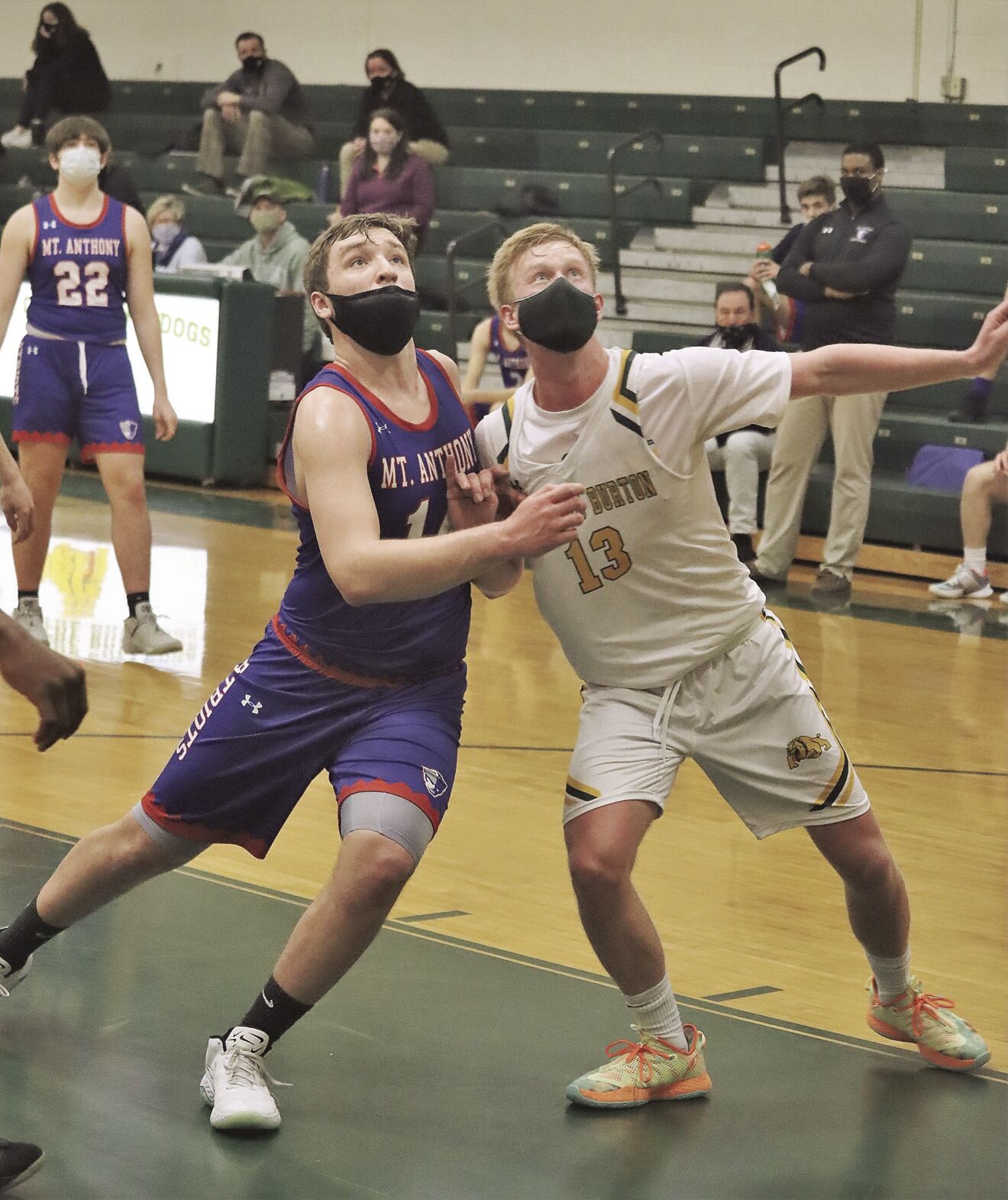 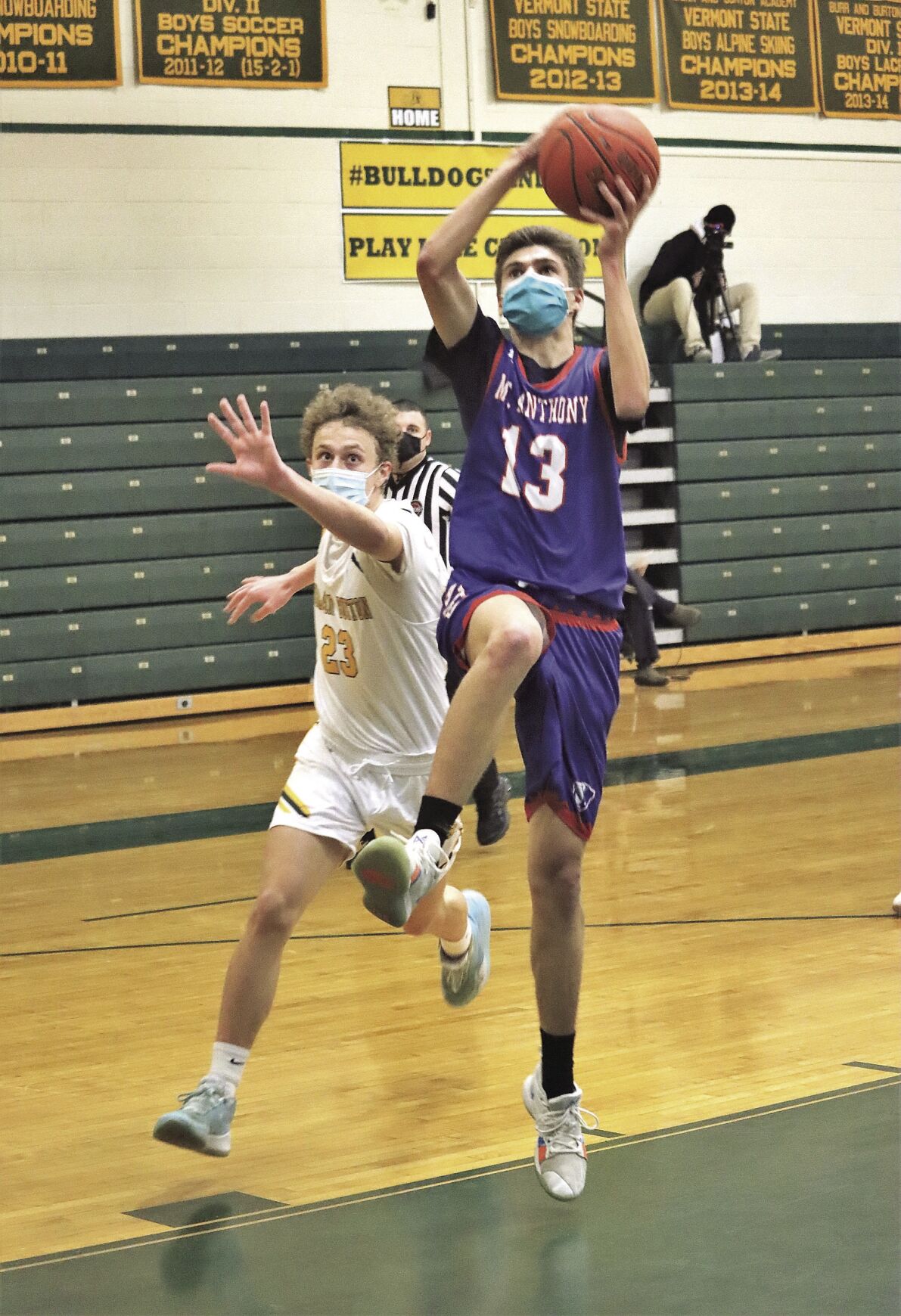 Mount Anthony's Nick Salem goes up for a layup as Matthew Carrara defends. 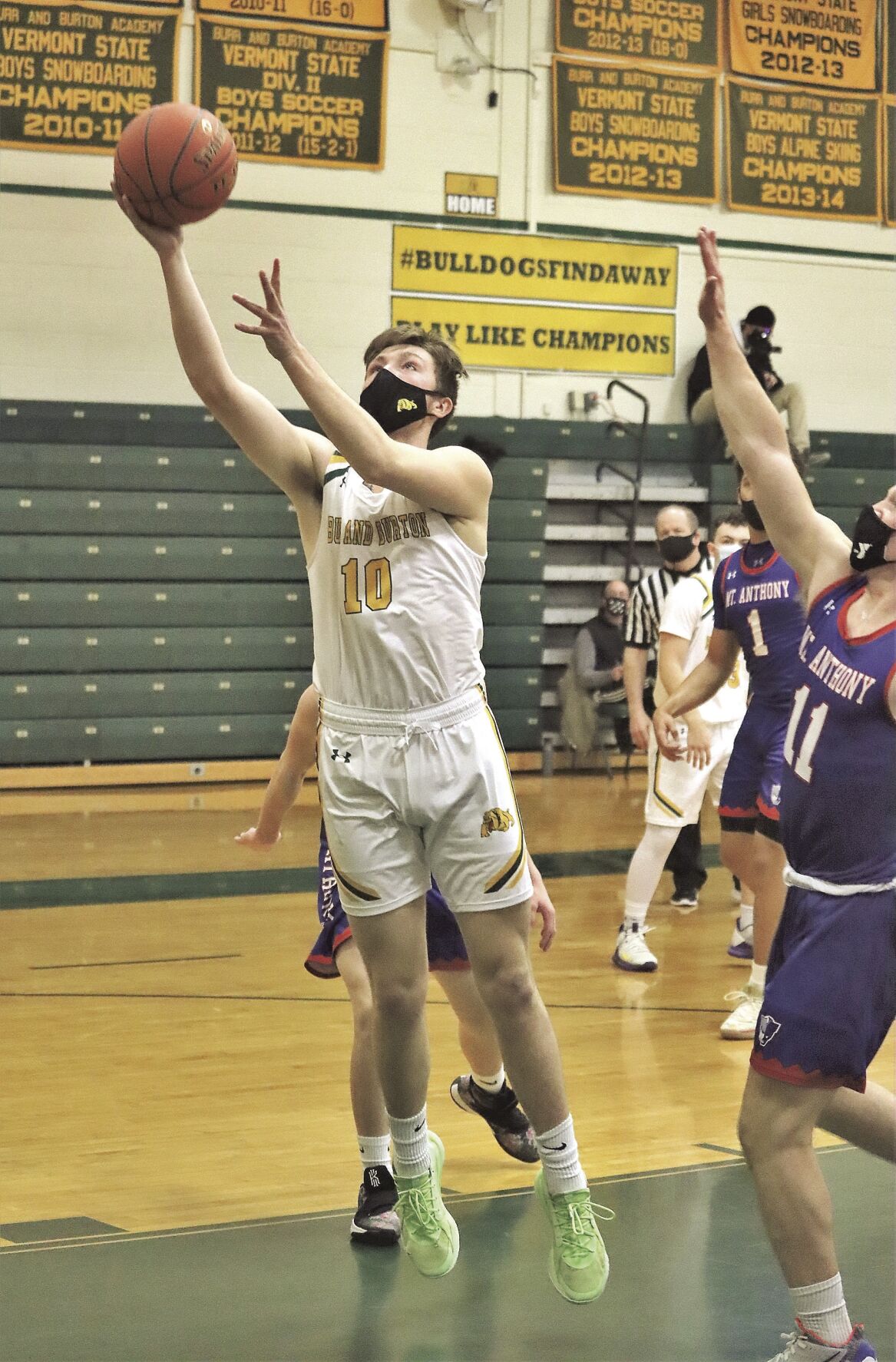 Burr and Burton's Dustin Joseph goes up for a layup during Monday's matchup with rival Mount Anthony.

Mount Anthony's Nick Salem goes up for a layup as Matthew Carrara defends.

Burr and Burton's Dustin Joseph goes up for a layup during Monday's matchup with rival Mount Anthony.

MANCHESTER — Usually, teams playing in their season opener take a little time to find their shooting rhythm, the first game of a typical length season.

Of course, the 2020-21 boys basketball season in Vermont will not be typical.

Burr and Burton were on point from beyond the arc, hitting 12 three-pointers on the day and holding off a late Mount Anthony charge in a 66-58 victory at E.H. Henry Gym on Monday morning, a game moved up with bad weather on the way.

But after the game, BBA coach Bill Muench said he was even more happy with his team's defense.

"I was more impressed with our half-court defense, MAU is a very good team, they are experienced, they have a lot of seniors that know what they're doing. But we played hard the whole time."

Brandon Burns led the way for the victorious Bulldogs, hitting five triples en route to a 19-point day. They were balanced too, as Matthew Carrara had 10, Madox Mathews nine and Michael Scheps also pitched in nine, all on threes.

"If we didn't play the way we played on defense, we wouldn't have had the opportunity to have threes to make," Muench said. "Scheps came off the bench and put on a show but he was also playing good defense. We're not good enough to make threes and then give the other team layups."

For Mount Anthony, Gavin Johnson started his senior year like he finished his junior year -- with a big effort. Johnson led all scorers with 22 points, adding seven rebounds and three steals.

The Patriots had three scorers in double figures, as Braeden Billert chipped in with 13 points and nine boards and Jordan Gardner added 11 points.

"We had some growing pains for sure, we have a lot of younger guys on the floor," said MAU coach Marcus Hass. "But our older guys need to step it up too. We had some great moments, though."

But the teams upped the pace in the second quarter, and the quicker Bulldogs had the advantage. A pair of Mathews baskets with two minutes left in the half gave Burr and Burton the lead and a three from Carrara in the final seconds put BBA ahead 35-31 at the break.

"We grew as the game went on and you could see it," Muench said. "Our decision-making got a little better and we played with a little more competitiveness."

The defenses came alive a little more in the third quarter, each team making it tough for the other to find an open shot. At one point, MAU pulled to within four at 41-37, but an 8-2 run put BBA ahead by 10 heading into the fourth quarter.

"I'll chalk this one up to first game jitters, but everybody's on the same playing field, so we have to do better," Hass said.

In the fourth, Johnson tried to will the Patriots back in the game, hitting a pair of and-one baskets early in the quarter. Another layup from Gardner cut the BBA lead down to one possession at 51-48 with 4:30 left, but the hot-shooting Bulldogs scored eight straight points, capped off by a three-point play from Aldenio Garwood, who scored all seven of his points in the fourth.

"We started to see the momentum shift in their favor and I called the timeout to let them know," Muench said. "We started to double down on Gavin. He's so strong and so good and I was impressed the way the boys played against him."

Free-throw shooting doomed the Patriots. On the day, MAU went 12-of-25 from the line, 48 percent.

"Free throws were not good," Hass said. "We just didn't execute where we needed to. And we missed a lot of stuff inside that we count on making, so we have to clean that up."

In his first career varsity game, freshman Carter Thompson showed he could hang with the big boys, scoring seven points -- all in the first half -- and grabbing two steals before fouling out in the final minutes.

"We got a lot of good minutes out of Carter," Hass said. "He works hard, he shows in practice that he wants to play. He's the youngest guy on the floor and he's a leader for us. He's always chirping and doing the right things on and off the court. I think he'll do good stuff for us for a long time."

"I was proud of the fact that both teams battled and it was a good fun hard game for both teams to play," Muench said. "I have a lot of respect for MAU and that's why it means a lot."