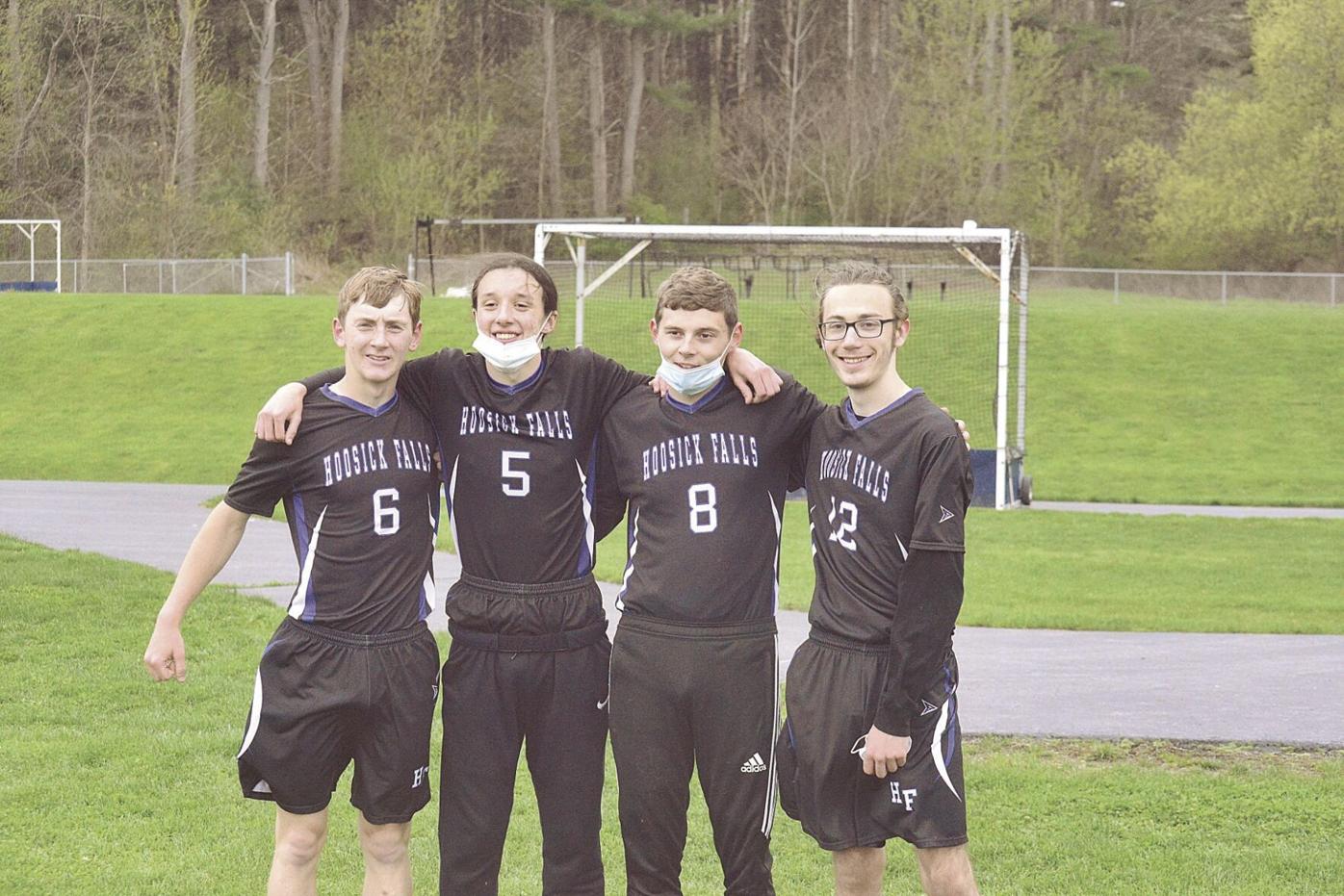 Hoosick Falls seniors Connor Powers (6), Max Archambault (5), Garret Smith (8) and Ryan LaPorte (12) pose for a picture prior to their senior game on Friday. 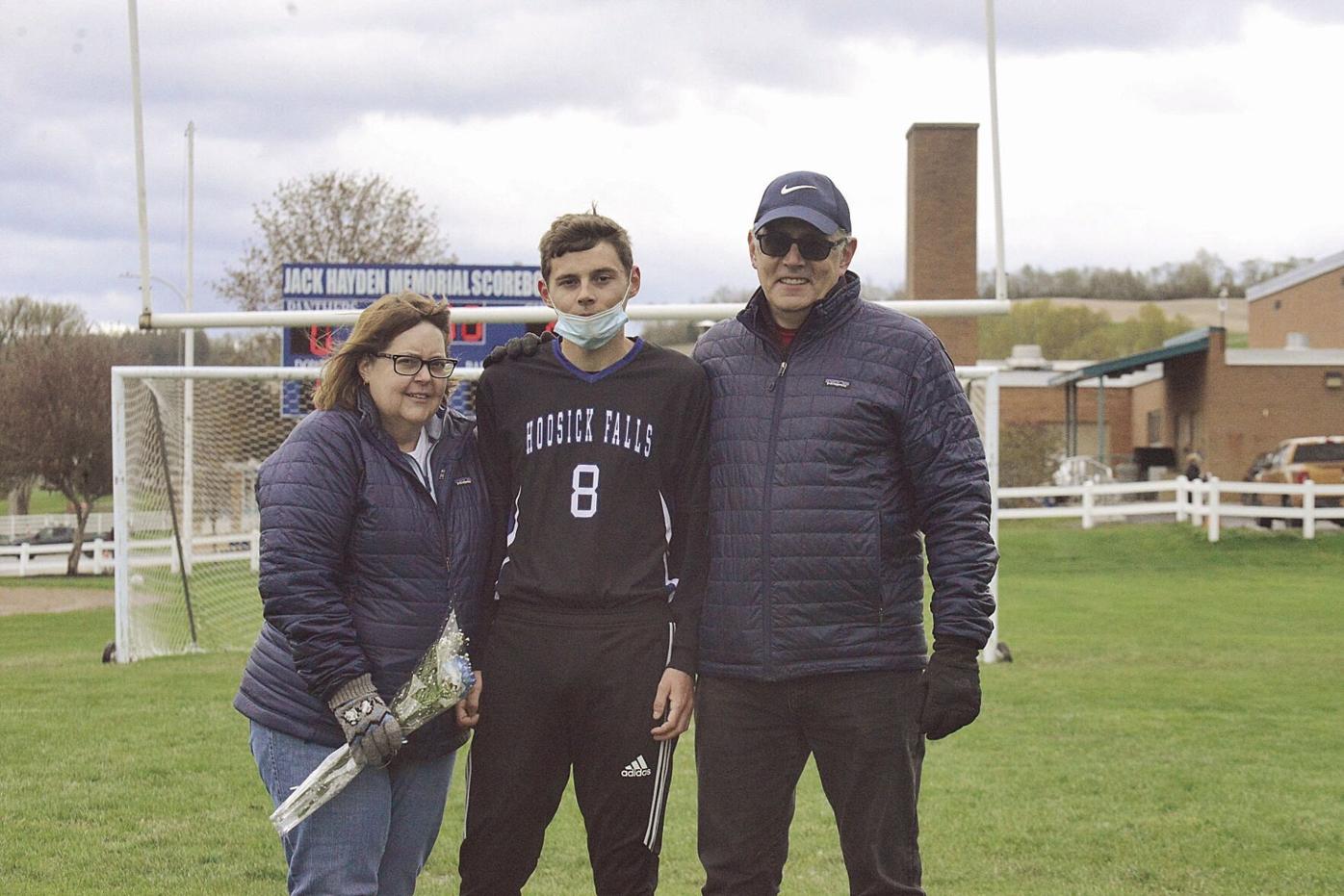 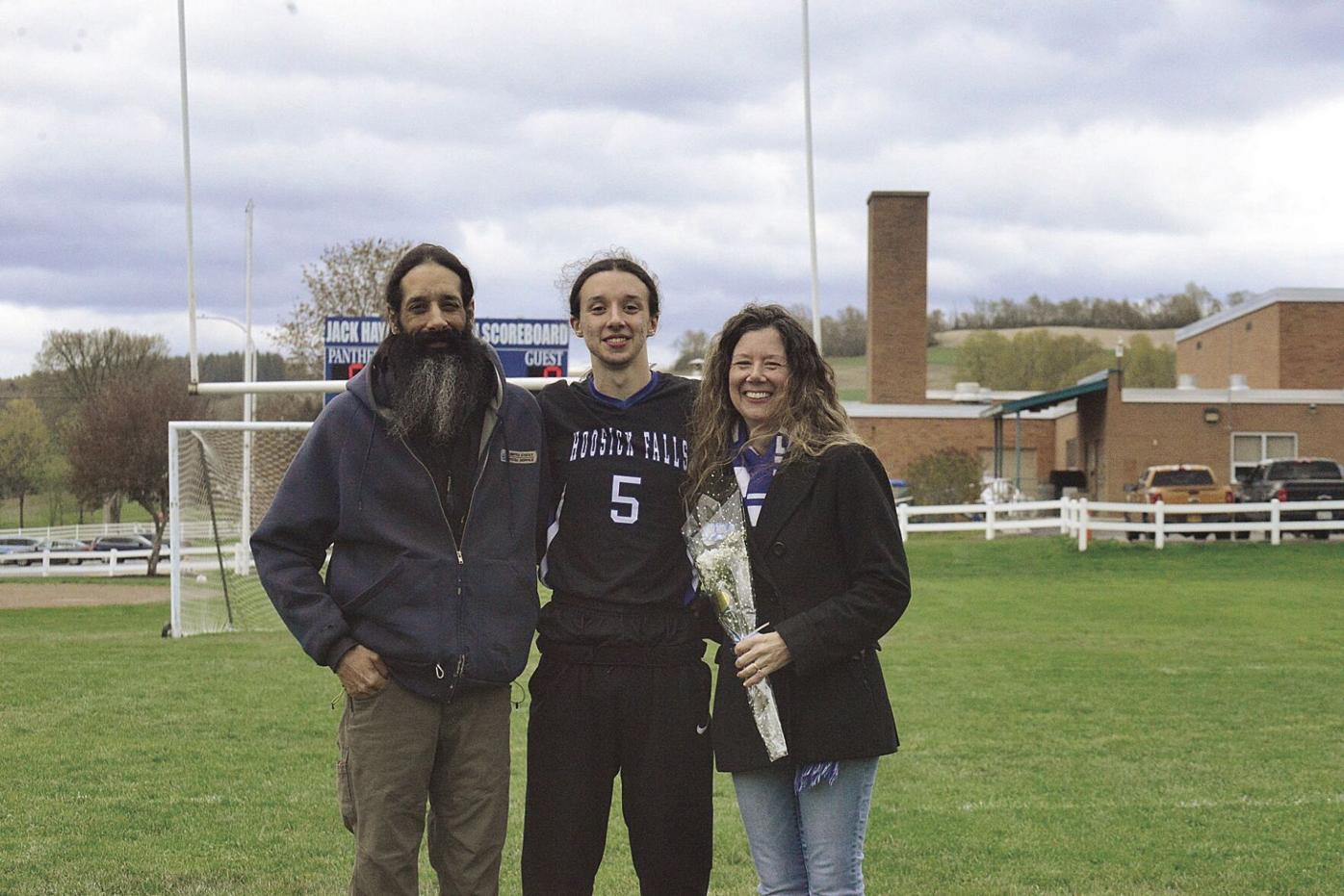 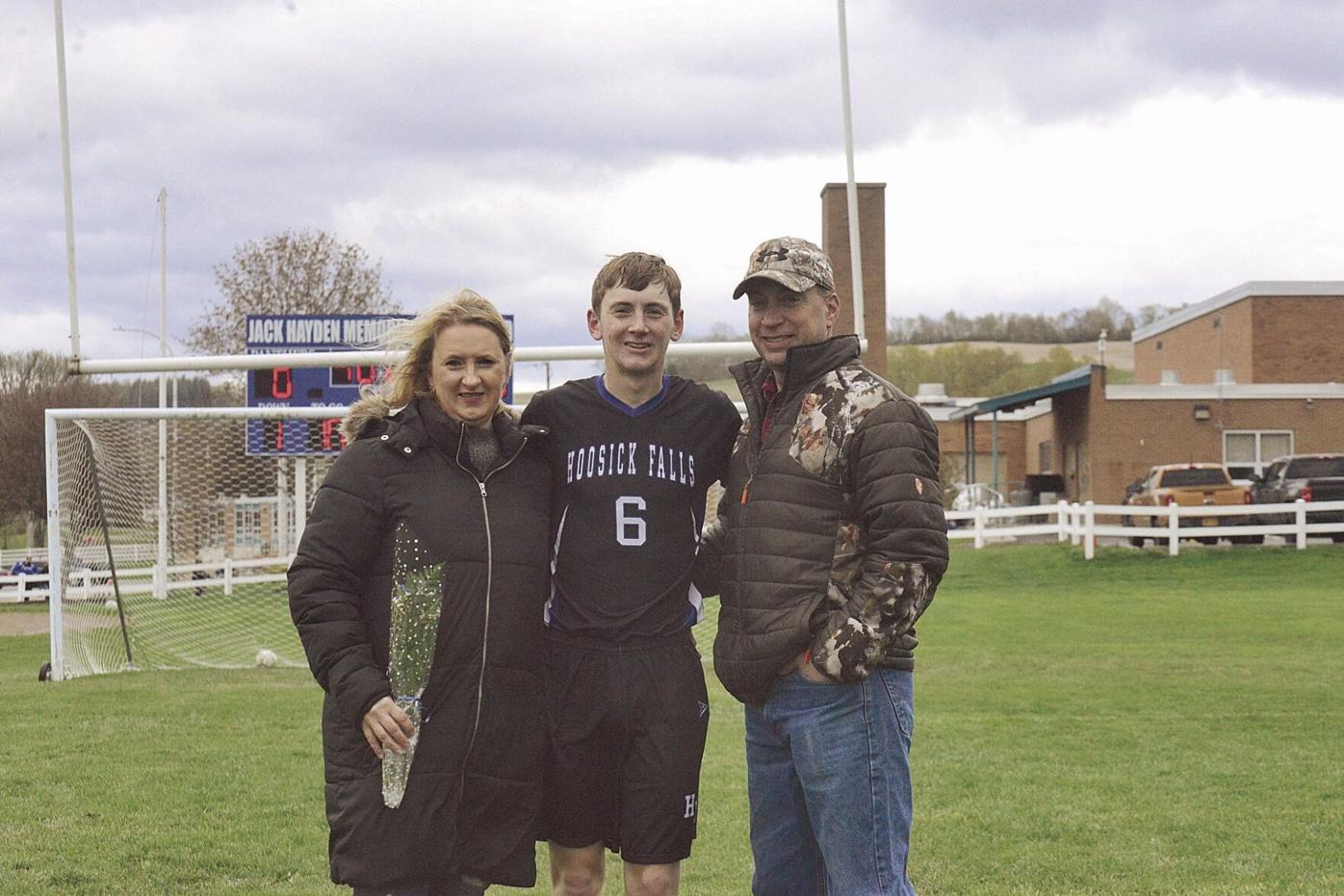 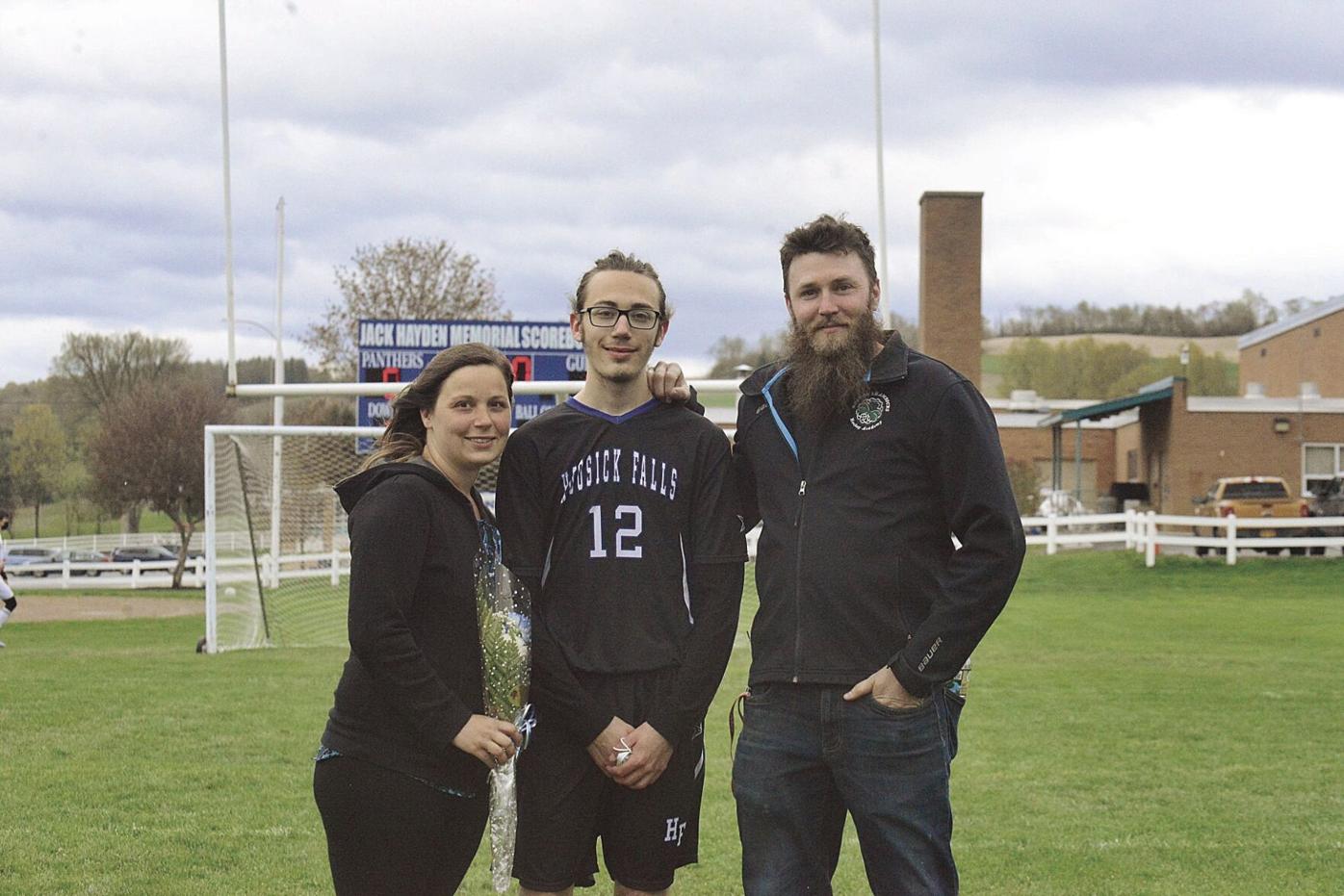 Hoosick Falls seniors Connor Powers (6), Max Archambault (5), Garret Smith (8) and Ryan LaPorte (12) pose for a picture prior to their senior game on Friday.

HOOSICK, N.Y. — The Panthers put together one of their best offensive performances of the season on Friday afternoon, tallying three goals with a handful more shots just missing the net.

The home team wasn’t able to turn the strong offensive effort into a win ,though, falling to Stillwater 4-3 in its season finale.

The visitors were powered by a hat trick from Grant Baker.

Baker got the scoring started just three minutes into the contest, dribbling through nearly the entire Panthers defense as he maneuvered down the field and put the ball into the back of the net.

It was senior night for Hoosick Falls, who celebrated its four members of the class of 2021.

Down 2-0 in the first half, one of those seniors was determined to put a crooked number on the scoreboard.

Keegan Keough tossed a perfect throw-in on the Stillwater side of the field to teammate Brendan Grenoble who beat his defender. Grenoble forced another Stillwater defender to step up to stop the ball inside the box, and without hesitation Grenoble found senior Connor Powers who fired a laser into the net for the Panthers first score of the contest, cutting the deficit in half.

Grenoble continued a strong first half by putting one into the net himself in the closing minutes of the first half. That knotted the game at 2-2.

Baker would add his second score in the final minute of the first half to once again put Stillwater ahead.

The field conditions made it tough at times for players to find their footing, as the rainfall throughout the day soaked the field. There were also heavy gusts of wind that made predicting where the ball would end up a guessing game at times. On one particular Stillwater throw-in in the first half near midfield, the ball ended up further out of bounds than where the player launched it thanks to a heavy wind gust.

The Panthers made a strong push in the second half, attempting eight shots while holding Stillwater to zero attempts in the opening 20 minutes of action. Many of the Hoosick Falls shots came off of Powers’ foot, as the senior was super aggressive.

Eventually, fellow senior Max Archambault tied the game at 3-3. The senior midfielder was one of his team’s main scoring threats all season, and came up big once again late in this contest with his low shot that found the right corner of the goal.

Baker completed his hat trick a few minutes later with the eventual game winner late in the second half. A few shots in the winding minutes gave Hoosick Falls some hope, but the shots were just wide of the net.

“Definitely came together towards the end, we played well, we were connecting passes, we were doing a lot of good things today, just they scored one more,” he said.

Ossant praised the four senior’s contributions this year, and throughout their time with the program.

“Garrett (Smith) and Connor have been with me for three years now, and they’ve come a long way. They stepped up a lot this year, played hard every game,” Ossant said. “That shows the younger guys you have to play hard, you got to play hard the whole game. And that’s one thing that they always do.”

“Max and Ryan (LaPorte) came back out this year, and contributed a lot. They all played well and they all did well this year, I was proud to have them as seniors,” Ossant said.