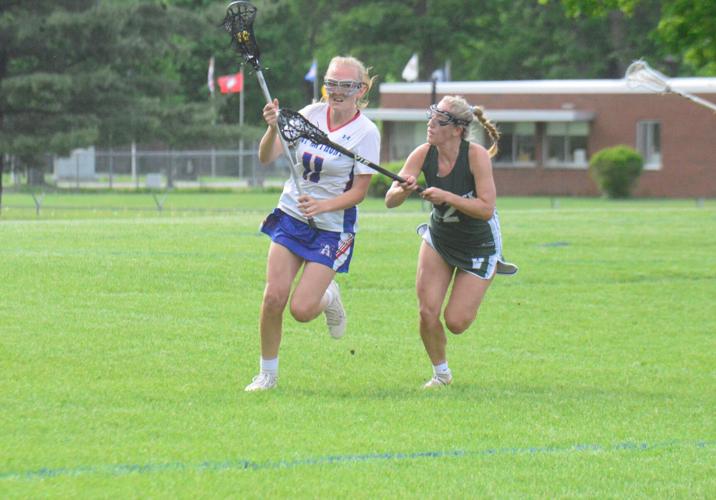 Mount Anthony's McKenna Brighton runs up the field while being chased by a Woodstock defender. 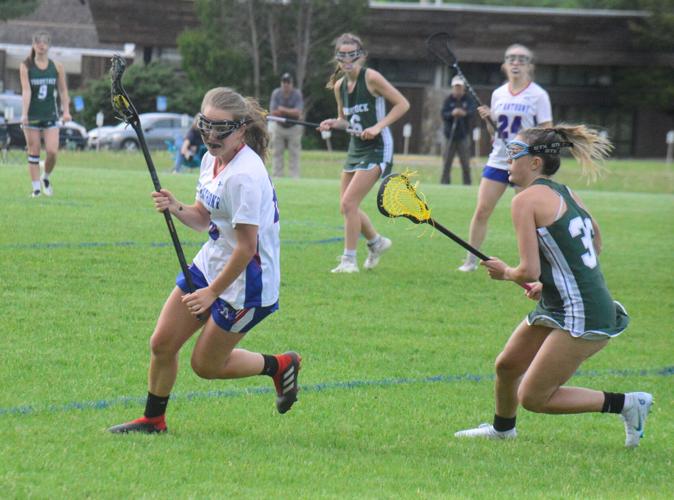 Mount Anthony's McKenna Brighton runs up the field while being chased by a Woodstock defender.

BENNINGTON — Woodstock girls lacrosse put together a four-goal run midway through the second half to separate itself from Mount Anthony on Monday afternoon at Vets Home Field.

The streak began with MAU clinging to a 5-4 lead and less than 18 minutes left on the clock. Woodstock’s Isabel Konijnenberg evened the score at the 17:24 mark, and the Wasps never looked back. They tallied three more goals over the next six minutes while keeping MAU off the board, using the run to escape Bennington with a 9-5 win.

Konijnenberg found Kellan Johannensen with a beautiful pass that flipped the field two minutes after her score, and Johannensen finished by putting it into the net. That gave the Wasps the lead, but they were not finished.

Hannah Reed and Claudia Shoemaker each scored within three minutes of Johannensen’s goal and just like MAU’s one goal lead turned into a three goal lead for Woodstock.

Patriots coach Alyssa Trudel said the Patriots will look to learn from the loss.

“There’s a lot of learning space with a young team. I think that when you get into close games late in the game, that’s some of those deciding factors. A bunch of 50-50 balls go the wrong way, those four goals happened quick,” Trudel said.

The Patriots had the game tied at 3-3 at the half and outshot Woodstock 12-7 over the first 25 minutes of play. MAU jumped out to a 3-1 lead early. Roey Rella-Neill got the scoring started for the Patriots on a feed from Alexia Allard just over two minutes into the game. That tied things at 1-1 after an early Woodstock score.

Then Elyse Altand went to work, netting the next two scores of the game, the second of which came thanks to a crisp pace in the open field from Sofia Kipp.

Woodstock was able to halt the MAU run with a goal of its own at the 9:02 mark of the first half. Gracelyn Laperie found herself near the circle with the ball, and a pair of Patriot defenders pestering her. Laperie managed to maintain possession, went low with her stick and somehow got an underhand shot off, which hit the field and past the stick of Taylor Lampron protecting the MAU net. That stopped the bleeding for the Wasps.

Shoemaker evened things at 3-3 with a little over five minutes left in the first half, grabbing a rebound on a Lampron save and capitalizing on the second chance opportunity.

Woodstock flipped the script in the second half, with a 13-8 advantage in shots.

Ava Elmer put the Patriots back on top with a score in traffic at the 22:18 mark of the second half. Woodstock answered with another Reed goal a minute later.

Altland put her third and final game of the day into the back of the net with 18:18 remaining in the contest, but that would be the final score for MAU as Woodstock began its run shortly after.

Woodstock’s Audrey Emery had some nifty saves protecting the cage, finishing her afternoon with 11 saves.

Lampron held her own in the MAU net with seven saves.

It was senior day for MAU, who honored its two seniors, Alexi Harrington and Sophia Kipp, prior to the game.

Trudel said her two seniors have helped lead the team during her first season leading MAU.

“Both have just had an immense leadership role right from [the start], being a first year coach, they both were so incredibly welcoming from the very first moment and have just set the pace for attitude and sportsmanship and hustle this season. It’s tough to not walk away with a win in their senior game, but they both played really well today.”

MAU is 7-8 on the season and concludes its regular season on Thursday on the road at Rutland. That game will begin at 4:30 p.m.