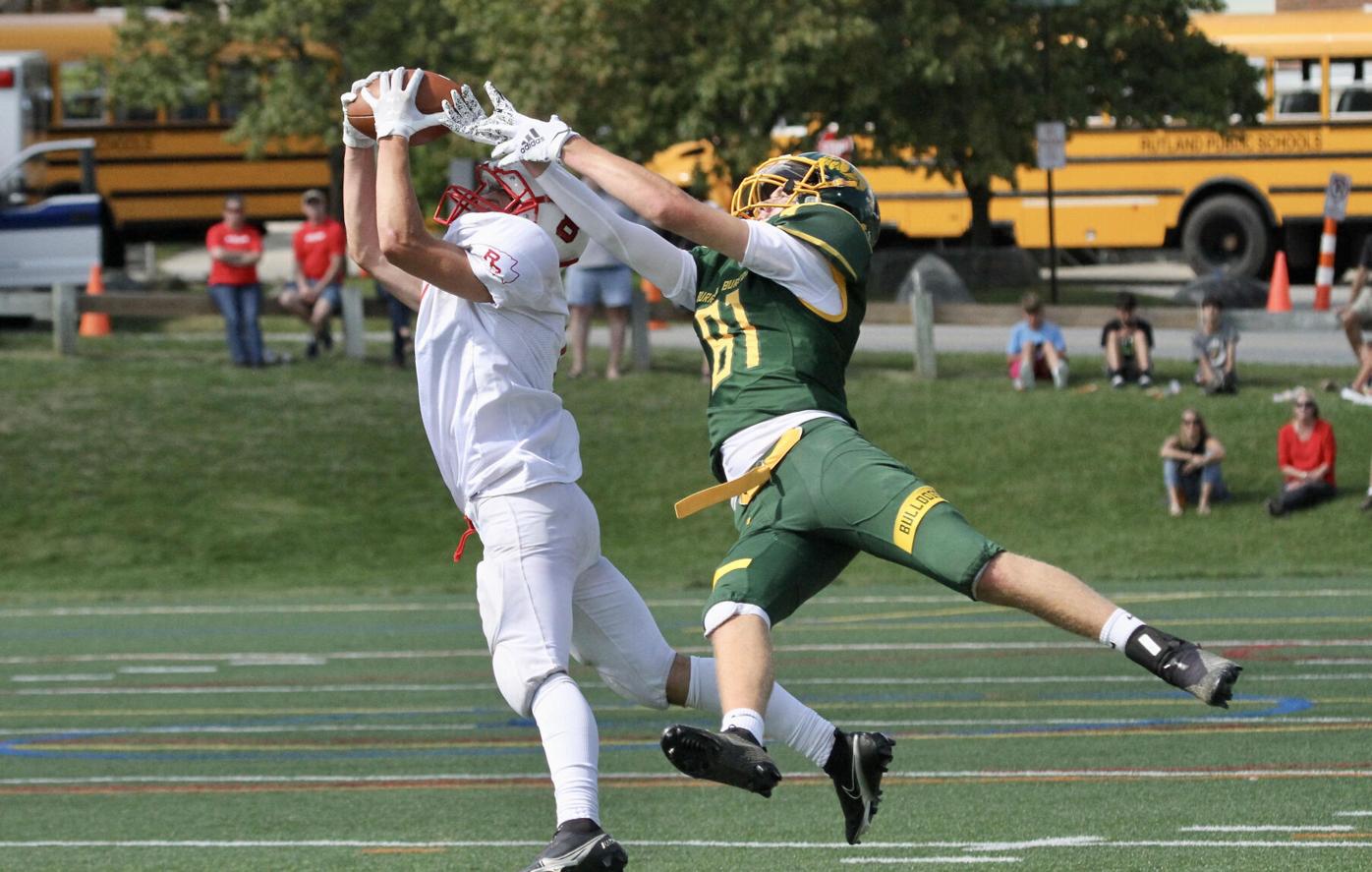 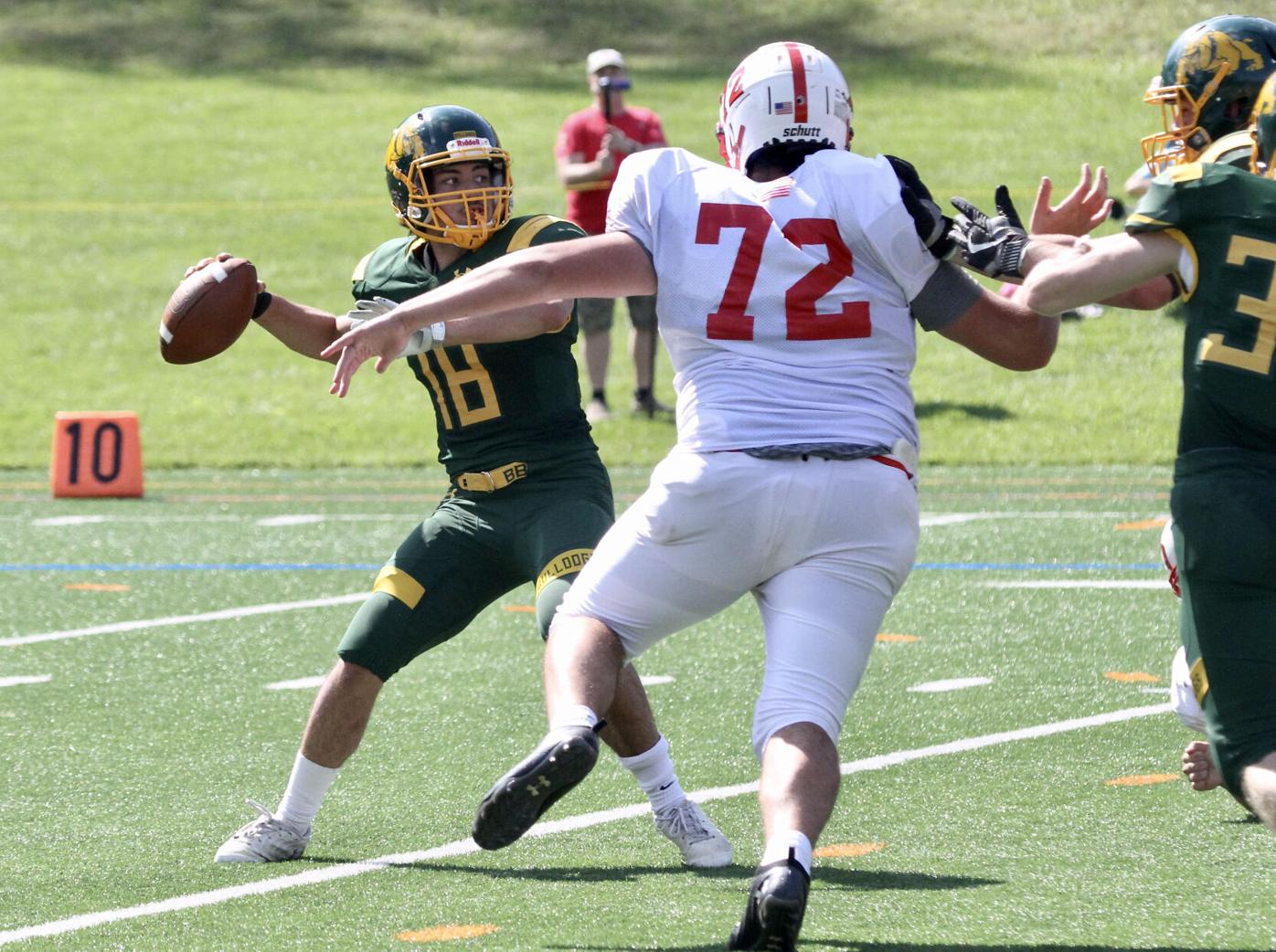 MANCHESTER — The top dog in Vermont high school football has fallen. Rutland made the trip down Route 7 and played fundamentally sound football for 48 minutes, downing Burr and Burton, defending 2019 tackle football champion, 33-14 on Saturday afternoon in the week two matchup.

The turnover woes started early for BBA. After forcing the Ravens to punt on the opening drive of the game, BBA began its first offensive possession at the 18 yard line. The Bulldogs drove 74 yards on 10 plays, but the productive drive didn’t result in points. BBA quarterback Jack McCoy rolled to the right looking for a receiver on 3rd and 7 just nine yards away from a score, but Raven defensive back Jonah Bassett showed great instincts, jumping the route and making a diving interception at the 2-yard line.

Rutland made it known they came to play on the following possession, driving 98 yards on 12 plays and taking the 7-0 lead as quarterback Trey Davine scrambled around the pocket, buying time for Will Fuller to get open down field for the 29-yard touchdown with just over two minutes left in the opening quarter. A tone-setting drive for the visitors.

Both Rutland coach Mike Norman and BBA’s McCoy rolled the dice at times, leaving their respective offenses out on fourth down. During Rutland’s first scoring drive, they faced a 4th and inches from the BBA 40-yard line. They converted with a 2-yard run, extending the drive that eventually led to a score.

McCoy found the endzone midway through the second quarter to even the game at 7-all, as he wasn’t touched on a QB-sneak from a yard out on second and goal. He set up the score with a 22-yard rush two plays prior.

Late in the first half, BBA found itself in a 4th and 4 from its own 41. Will Addington had his man beat down the right sideline, as McCoy tossed a great ball about 25 yards downfield. Addington couldn’t secure the catch, giving Rutland great field position with 1:33 left in the first half.

It took the Ravens just two plays to make the Bulldogs pay, as Davine dropped a 41-yard score right into the hands of Bassett. The snap on the extra point attempt was botched, and Rutland regained the lead 13-7 with 80 seconds left in the first half.

McCoy took command of the offense on the following possession, completing all three of his passes and the Bulldogs made their way onto Rutland’s side of the field with the first half winding down. On the fourth play of the drive, McCoy scrambled as Rutland’s defensive line provided some pressure in the pocket. McCoy was met at the line of scrimmage and remained down on the field after the tackle. The quarterback would not return to action with an apparent shoulder injury.

That forced Will Addington to slide into the QB slot for BBA. Up to that point, Addington was playing receiver for the Bulldogs, hauling in two catches for 14 yards. He also got his hands on an interception.

The senior stepped in as QB with just 6.1 seconds left in the first half, enough time for one play. He connected with Trevor Greene 30 yards down the field, but the clock hit zeros and BBA trailed 13-7 at the break.

Addington completed 7-for-15 for 107 yards, one touchdown and one interception on the day.

Rutland’s offense took it to the next level in the second half. Bassett got his hands on his second interception of the day with 4:17 to play in the third quarter, and Rutland didn’t waste the opportunity. A first down run set up a play action pass as Davine hit a wide open Slade Postemski for a 57-yard score, extending the Rutland lead to 19-7.

That would be the first of three straight possessions Rutland converted a Bulldog turnover into a touchdown.

A couple Bulldog fumbles led to a 12-yard touchdown pass from Davine to Bassett and a one-yard keeper from backup quarterback Eli Pockette.

Burr and Burton finds themselves in an unfamiliar situation, as they suffered just two losses in the previous two tackle seasons.

“Throughout any season, it’s how you handle the adversity. So, we just got to go back to the drawing board and clean a few things up. We had four turnovers today,” said coach McCoy. “I think that they just played better than us today. They made less mistakes. It’s a long season, you take it week by week.”

The last loss BBA suffered was nearly two years ago. On Oct. 4, 2019, St. Johnsbury downed BBA 50-38 that day. The Bulldogs avenged that loss in the Division I championship game with a 47-20 victory. McCoy had that matchup on his mind after Saturday’s loss at the hands of Rutland.

Who the Bulldogs will see next is Champlain Valley in Hinesburg on Saturday. Kick off is scheduled for 1 p.m.