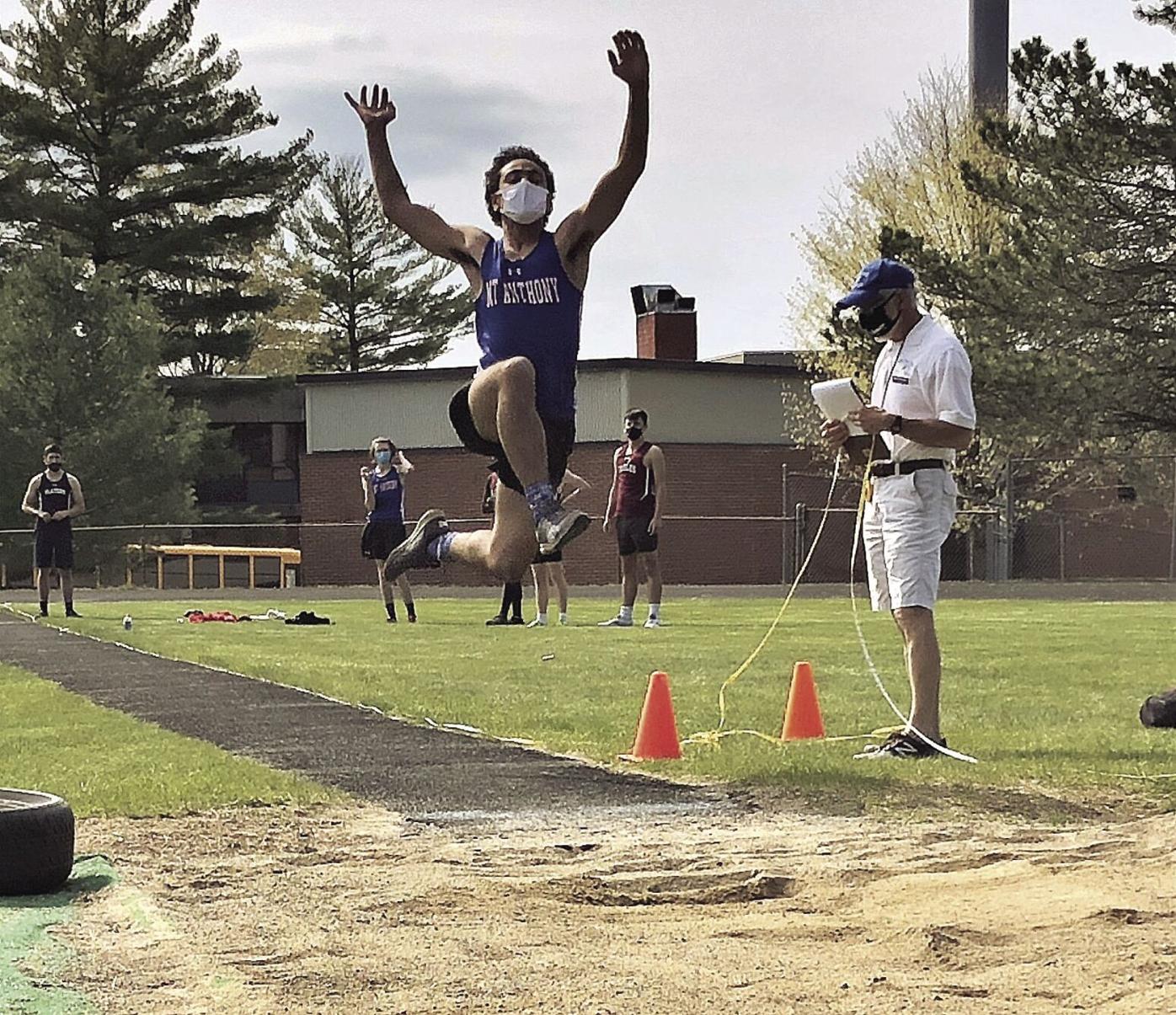 A Mount Anthony track athlete competes in the long jump on Tuesday at Zemianek Track. 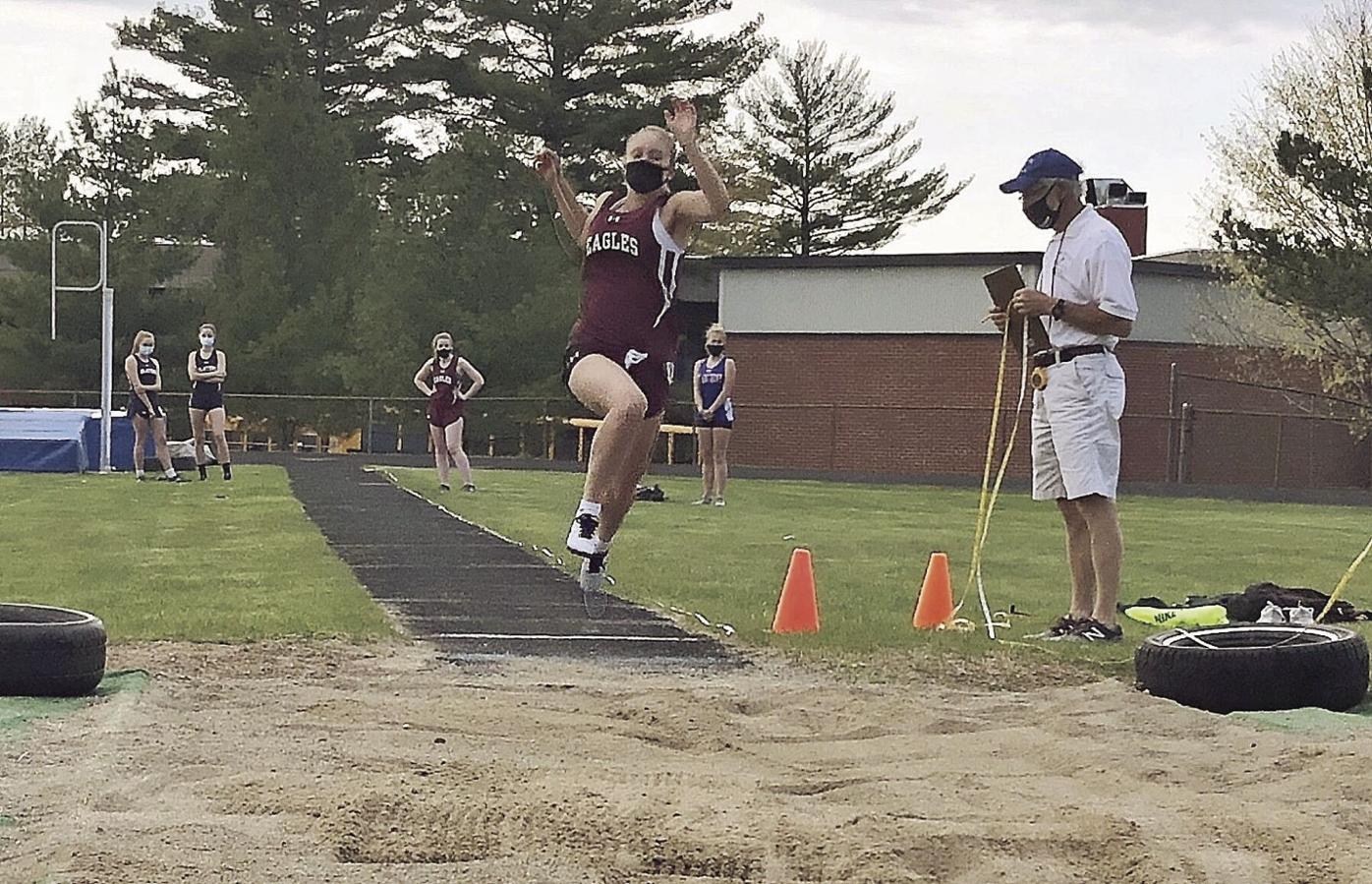 An Arlington athlete competes in the long jump on Tuesday at the Zemianek Track at MAUHS.

A Mount Anthony track athlete competes in the long jump on Tuesday at Zemianek Track.

An Arlington athlete competes in the long jump on Tuesday at the Zemianek Track at MAUHS.

BENNINGTON — The Mount Anthony track and field teams swept its home meet on Tuesday against Arlington and Fair Haven.

Double winners for the Mount Anthony boys included Isaiah Brunache in the shotput and discus, the latter of which he threw 129 feet, beating his teammate, Gavin Johnson, by nearly 17 feet.

Johnson had a good day himself, with a pair of second-place finishes in the shot and discus, but the javelin is where he excelled, breaking the Mount Anthony school record in the event with a throw of 167 feet, 10 inches.

Brooks Robson was also a double winner, taking the title in both the long jump and the triple jump. Andrew Ponessi won the 400 meters and Brady Beaudoin won the pole vault. Ethan LaForest finished first in the 3,000 meters.

Arlington’s Dominic Whalen was a double winner, finishing first in the 800 and 1,500-meter events.

On the girls side, Maggie Payne won the 800 meters and helped the 4x8 team of Chloe Stitcher, Zoe Pelisano, Chayla Greenslet and herself to a victory in the relay. The MAU girls swept all three relays.

Nikita Noyes-Martel won both hurdle events, the 100 and the 300. Maya Davis scored a victory in the javelin throw. Eden White won the 1,500 meter run.

For Arlington, Denita Moore won the discus and Charlotte Fischer won the shotput. Audrey Robinson won the 3,000 meters for the Eagles.

Offense on point as Bulldogs roll

RUTLAND — The Burr and Burton team has its offense rolling on all cylinders, scoring double-digits for the third game in a row, this time a 17-2 win over Rutland in six innings on Tuesday.

Nate Smilko, Sam Steinman and Will Addington all had a pair of RBIs and Coleman Reece, Addington, Trevor Greene and Brandon Burns had multiple hits.

Greene earned the win on the mound for the Bulldogs.

BBA is 3-1 and travels to Brattleboro on Friday.

HOOSICK, N.Y. — Brendan Grenoble had a hat trick to lead the Hoosick Falls boys soccer team to a 5-1 win over Saratoga Central Catholic on Tuesday in a Wasaren League crossover.

Ryan LaPorte and Garrett Smith added the other two scores for the Panthers. Alex Salvesvold had a pair of assists and Max Archambault also had a helper.

The Panthers will host Stillwater on Thursday night at 7 p.m. at the high school for the team’s senior night.

CAMBRIDGE, N.Y. — The Cambridge boys soccer team advanced in the Wasaren League soccer tournament on Tuesday with a 3-2 win over Tamarac.

With the win, Cambridge is set to face Mechanicville later this week in the next round of the tournament.

Panthers golf back in the win column

HOOSICK, N.Y. — The Hoosick Falls golf team continued their season on Monday with a match against Stillwater at the Hoosick Falls Country Club (par 34). The Panthers won by a score of 5-0 on a sunny but surprisingly blustery day.

Hoosick Falls senior Mat Smith led all scorers with a score of 36, snagging a pair of birdies on the par-5 third hole and the par-4 ninth.

Nick Hales and Logan Pickett led Stillwater with a pair of 53’s.

Their seventh and final match will take place on Wednesday against Tamarac. They will then finish the week with the Wasaren League Tournament in Saratoga.

The Panthers got the scoring started with a goal from Lyric Kriner with 10:12 to play in the second quarter. Corinth’s Emily Mattison answered later in the quarter to tie the game at one.

Ayla Fauler put the winning goal in the cage with 3:57 to play in the final quarter.

Next up for Hoosick Falls is a Wednesday match at Afrim’s Sports Complex against Ichabod Crane at 6:30 p.m.