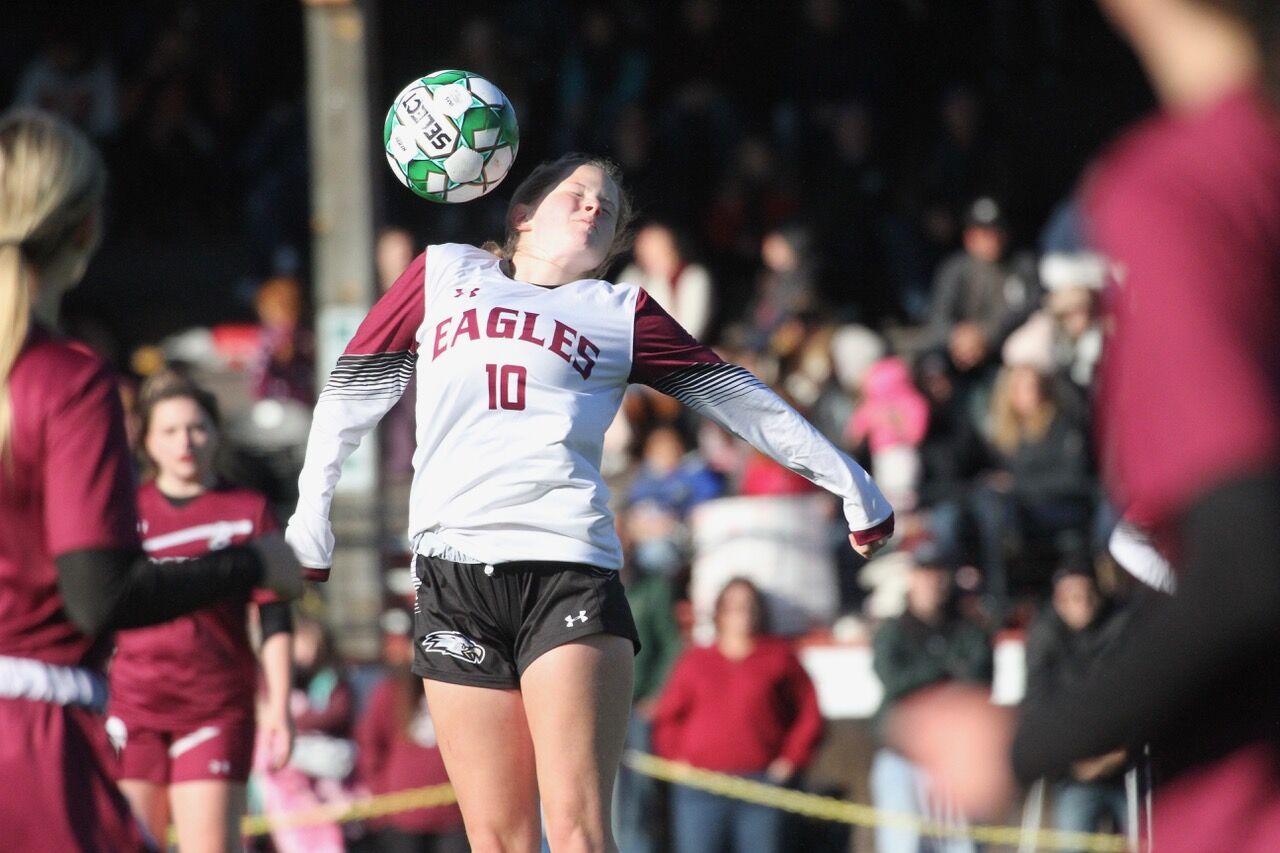 Arlington's Aubrie Hawley elevates and plays the ball during the Division IV championship game at Applejack Stadium in Manchester on Saturday. 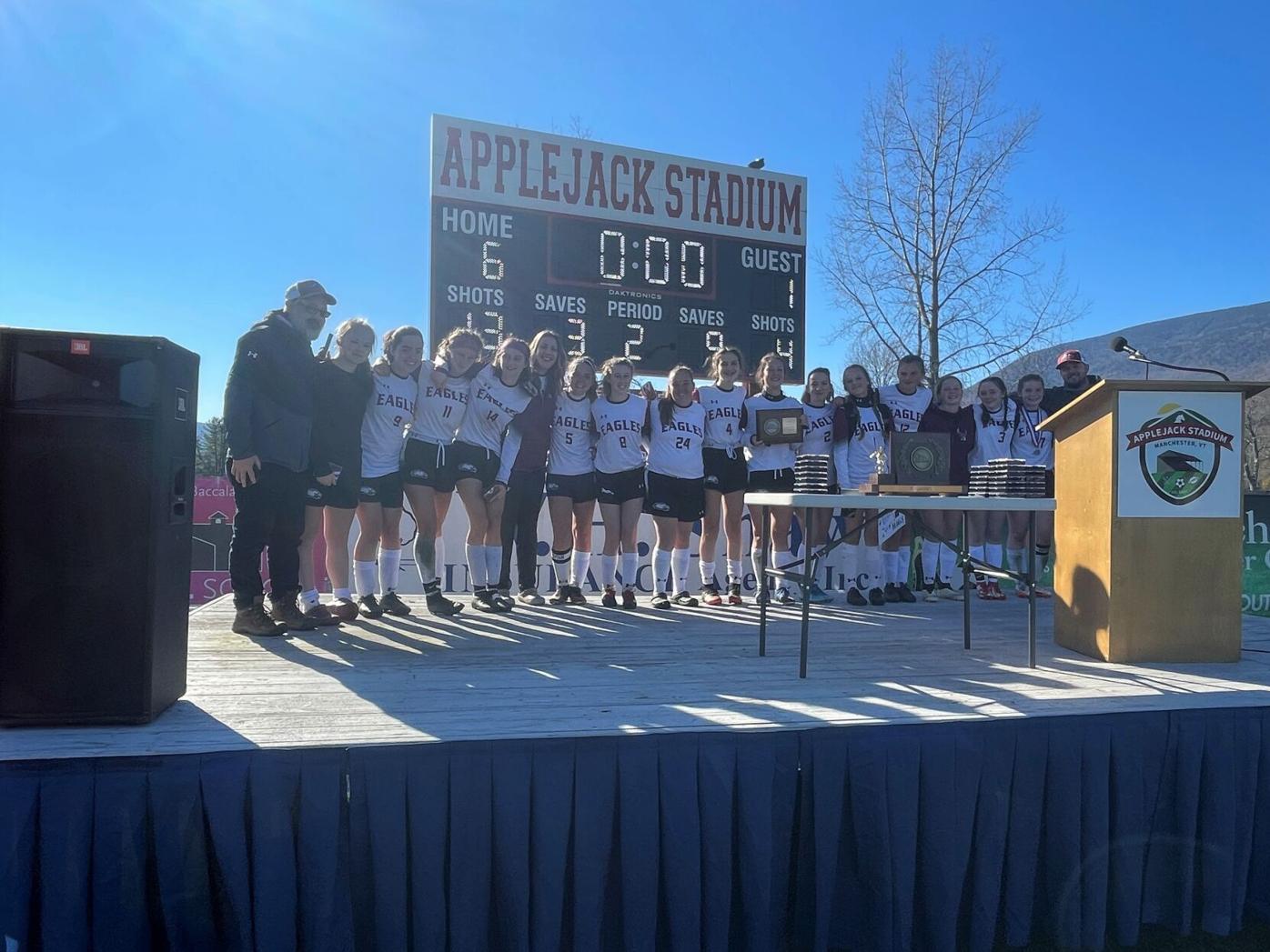 The Arlington girls soccer team on the podium at Applejack Stadium.

Arlington's Aubrie Hawley elevates and plays the ball during the Division IV championship game at Applejack Stadium in Manchester on Saturday.

The Arlington girls soccer team on the podium at Applejack Stadium.

MANCHESTER — Arlington coach Kirk Robinson knew that his Eagles needed to come out of the gates with lots of energy, and an early goal, in order to hang around with No. 1 undefeated Proctor in Saturday morning’s Division IV championship game.

The Eagles checked one of those two boxes over the first five minutes of play. Sidney Herrington banged a shot off the crossbar a minute and a half into the game, and another Arlington shot shortly after didn’t miss the far post by much. Neither chance materialized, however, and Proctor settled in.

When the Phantoms play their game, they are the class of Division IV. They proved as much on the Applejack pitch on Saturday, running away with a 6-1 victory over Arlington for the state championship.

“We were all about that first 10 minutes,” Robinson said. “If one of those (shots) goes in, we think we can play them close the whole way.”

Instead, it was Maggie McKearin making an impact early for the Phantoms. The senior entered Saturday’s game with a staggering 42 goals scored on the season. After absorbing Arlington’s initial threats, McKearin put her team on the scoreboard six minutes in on a breakaway.

She added a couple more scores over the next 20 minutes, looking completely comfortable dribbling through traffic and splitting Arlington defenders on her way to the net.

She also set up Emma Palmer on a score during that stretch. McKearin’s first half hat trick gave Proctor a 4-0 lead with 10 minutes to play in the first half. The senior said it was crucial for Proctor to get on the scoreboard first against a relentless Arlington team.

“Whether it’s one or two or three goals, I think it’s just important to get out and get up on top, because this Arlington team will never quit,” McKearin said. “For us to strike first, it gave us a lot more confidence for the rest of the game and shook off the nerves.”

Laci French extended the Phantoms lead to 5-0 with 88 seconds left in the first half. French bounced a direct kick into Arlington’s net.

Arlington never quit, playing Proctor even in the second half. Audrey Robinson put a number on the scoreboard for the Eagles with 10:28 left on the clock. Robinson played a direct kick on the right side of the pitch to the left side of the net, bouncing it past Proctor’s goalie. That made it a 5-1 game.

Proctor tallied the final score with 2:40 left to play when junior midfielder Jenna Davine found the back of the net.

Denita Moore was solid protecting Arlington’s goal in the second half, stopping seven chances. The senior goalie finished her high school soccer career with a 10-save performance.

It may have not been the ending Arlington was hoping for, but coach Robinson took time after the loss to reflect on how successful the season was for the No. 6 Eagles.

“Incredible season. Beat the three (seed), beat the two, and we knew we had quite a leap to beat the one,” Robinson said. “We knew if we did our best, we’d have a good chance to try at it and we gave it our best try.”