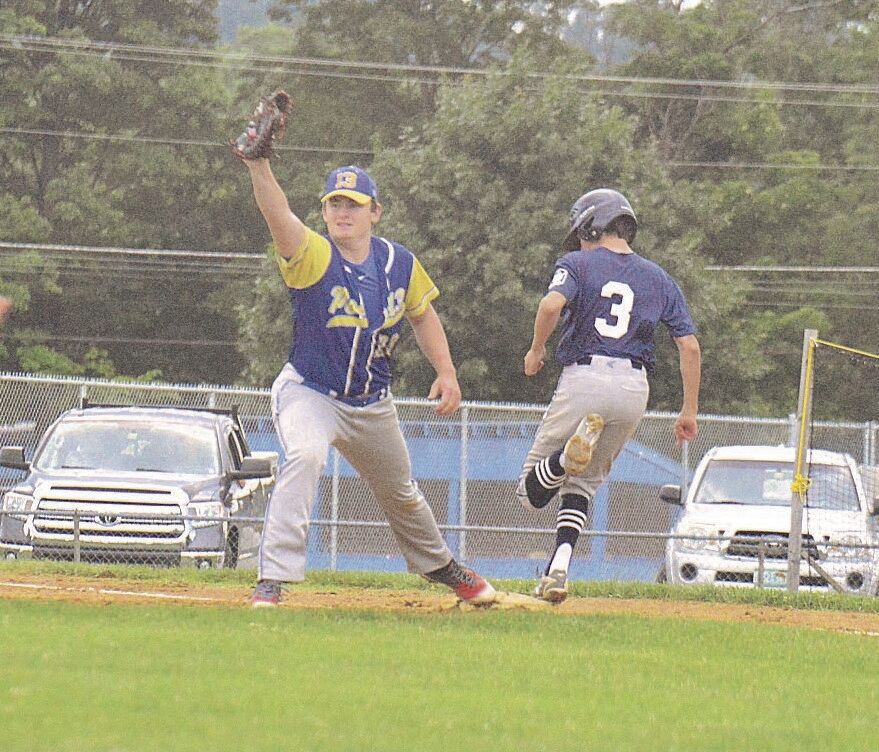 Top: First baseman Tucker Thayne stretches to get the out at first base. Above: Ethan Paligo delivers a pitch for Post 13 in Wednesday’s game against White River Junction. 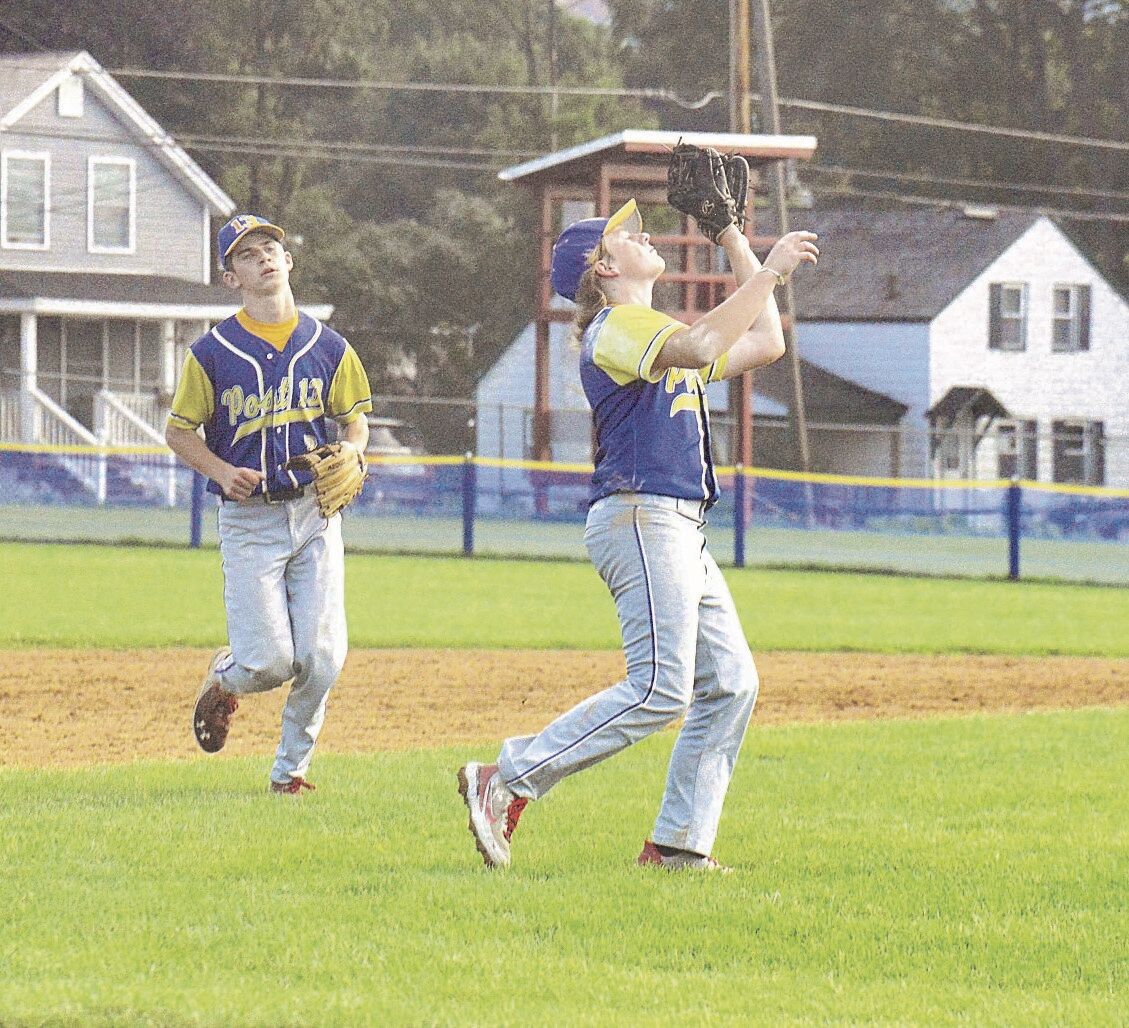 Third baseman Jake Tibbetts gets underneath a pop up in the infield. 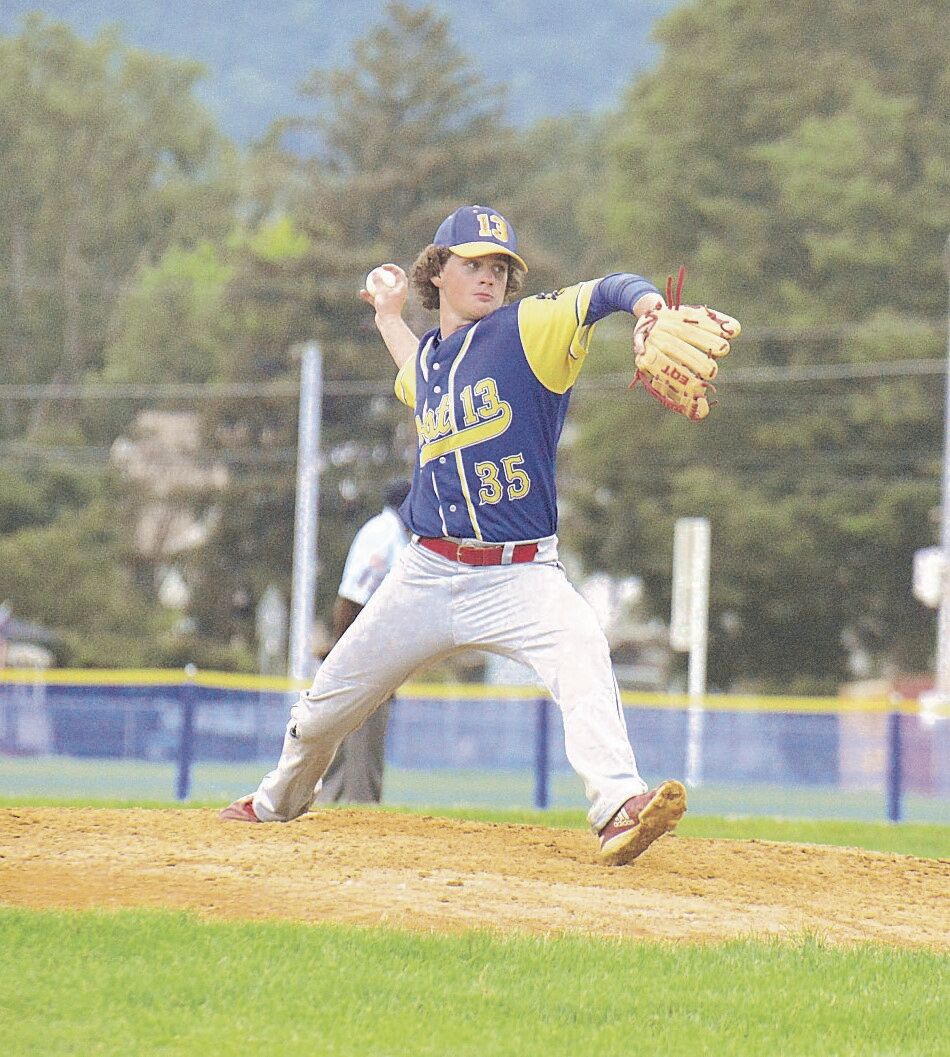 Top: First baseman Tucker Thayne stretches to get the out at first base. Above: Ethan Paligo delivers a pitch for Post 13 in Wednesday’s game against White River Junction.

Third baseman Jake Tibbetts gets underneath a pop up in the infield.

BENNINGTON — The first inning has plagued Bennington Post 13 for much of the summer. Wednesday’s 6-5 loss to White River Junction Post 84 was another example of that.

Ethan Paligo drew the start for a Post-13 team that was short a few players. According to Post 13 skipper Ryan Greenslet, Paligo hadn’t pitched in three years.

He started quick, retiring the first two batters he saw before getting into some trouble. The heart of the Post 84 order got to Paligo on a single and back-to-back doubles to deep left field, scoring two runs. Paligo tried to pick off Danny Bushway at second for the third out of the inning, but his throw sailed into center field, giving Bushway third base. Ethan LaBatt’s throw from center then sailed out of play, bringing Bushway home. That gave WRJ a 3-0 advantage before Bennington even stepped into the batter’s box.

A mixture of defensive miscues and untimely passed balls allowed WRJ to tack on another three runs in the following frame, building a 6-0 lead. The visitors looked poised to run away with an easy win. Then Bennington settled in.

Josh Colegrove singled to left field to begin the inning, followed by a Tanner Bushee single. Paligo laid what was meant to be a sacrifice bunt down the third base line, but he placed it perfectly and reached safely at first to load the bases with no outs. Bennington plated three in the third on runs batted in from Ethan LaBatt, Carter Thompson and Jake Tibbetts to cut the deficit in half, 6-3.

Paligo was eventually pulled with two outs in the fifth inning, eclipsing the 100-pitch mark. Greenslet once again turned to an unfamiliar arm in left-hander Tucker Thayne.

Thayne had a great outing, not allowing a run in his two and one third innings of work.

Greenslet was very pleased with how his pitchers responded to getting the call.

“You couldn’t ask for anything more,” Greenslet said. ”It just goes to show I can pitch any kid on this team.”

As the game tightened up, emotions heightened. There were some tense moments in the final few innings, especially once Tibbetts drove in two more runs in the bottom of the fifth to make it a one-run ballgame.

Greenslet was enthusiastically cheering on his batters while coaching third base. The Post 84 crowd found Greenslet’s enthusiasm disingenuous and let the Post 13 skipper know about it. There was some hostility in the air.

Eventually, the home plate umpire issued a warning to both sides after hearing players exchanging words on the field.

In what felt like a playoff atmosphere, Bennington had the winning run on first base in the bottom of the seventh inning. Thayne followed a one-out Tibbetts single with a walk. Nick Santiago found himself ahead 3-1 in the count which would have loaded the bases, but chased a high would-be ball four fastball bringing it to a full count. Santiago struck out on the following pitch. Nat Greenslet was Post 13’s last hope, but he too went down swinging as Post 84 hung on and escaped with the 6-5 win.

Bennington’s manager believes the two sides are evenly matched. Even with his team coming up a little short, Greenslet said it was a great game to be a part of.

Greenslet will only have to wait five more days, as Post 13 will host WRJ again on Monday. They’ll have their hands full prior to that, with a continuation game against Bellows Falls Thursday at 5 p.m. followed by a full-game between the two teams. Post 13 also has a matchup with Brattleboro on Saturday.