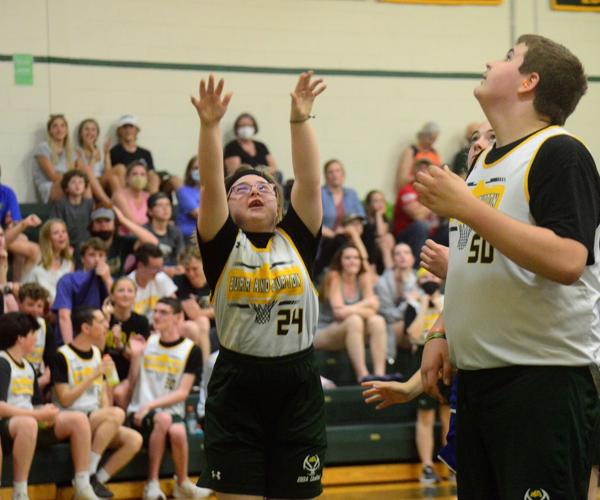 Burr and Burton's Riley Barton (24) follows through on her jumpshot during the fourth quarter. 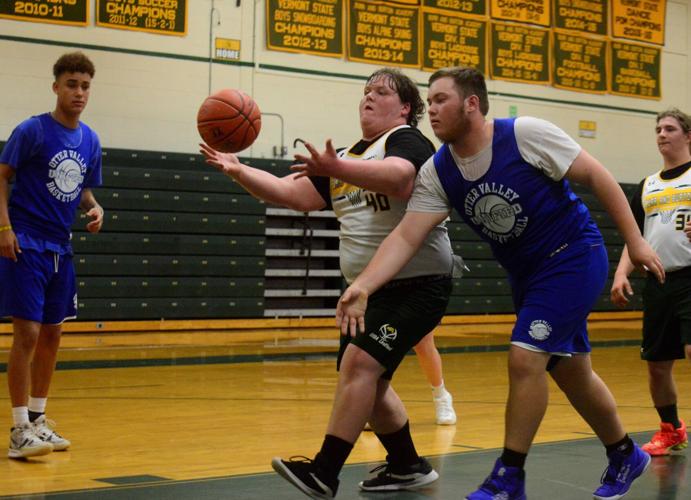 Burr and Burton's Tyler Keyes looks to get his hands on the ball while being defended in the low post. 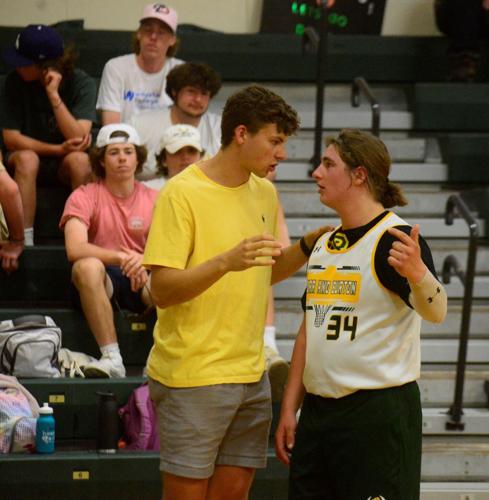 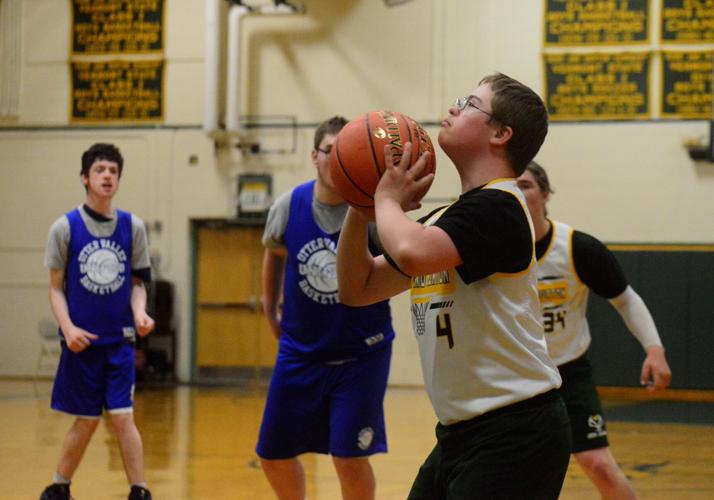 Burr and Burton's Keegin Arace sets for a jump shot. 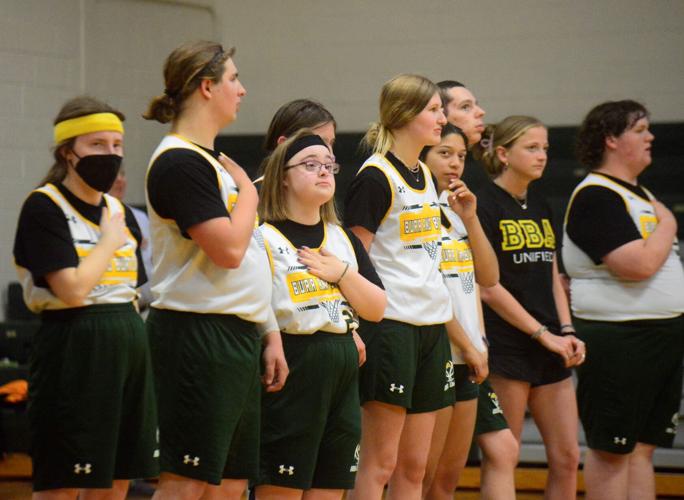 The Burr and Burton unified basketball team stands for the national anthem prior to its playoff game against Otter Valley on Friday.

Burr and Burton's Riley Barton (24) follows through on her jumpshot during the fourth quarter.

Burr and Burton's Keegin Arace sets for a jump shot.

MANCHESTER — Springtime and rising temperatures outside mean baseball and lacrosse for many high school athletes, but basketball was still in full swing at E.H. Henry Gym on Friday night when Burr and Burton got the 39-33 win over Otter Valley to advance to the finals in the South Division of Vermont’s unified basketball tournament.

Unified basketball was a Special Olympics event until 2016 when the Vermont Principals’ Association (VPA) adopted it. There are a few rules added to the unified game to maximize the experience for the athletes.

What is unified basketball?At any given time in the game, each team has on the court three athletes and two unified “partners.”

Partners act as on-court coaches and facilitate the action in the game, bringing the ball up the court and passing to the athletes

Partners are not to shoot, steal the ball, or block shots from opposing athletes

Part of the intent in every game is to get every athlete plenty of playing time and scoring opportunities, but that certainly doesn’t mean there isn’t some very competitive and skilled play.

Freshman Lane Sargent was a monster for the Bulldogs, scoring 18 points. The big man that looks to stand about 6 feet 5 inches tall owned his spot in the low post the whole game and he cashed in almost every time his teammates got him the ball, also cleaning up on the boards and scoring several second-chance baskets. He was very difficult for the Otters to score over in the lane on the defensive end as well.

Junior Dylan “D-Dawg” Skandera was a force as well. Even if he didn’t have his bright orange sneakers on, his hustle and intense play on the court separated him from the crowd easily. He scored 10 points (including 2-2 from the free-throw line) in the game and sprinted all over the court, playing almost the entire game without showing any signs of tiring.

He got in a little bit of foul trouble early on, having three before the first frame was over. He got his physical defense under control as the game went on, though, still causing plenty of havoc for the Otters.

“He can get a little aggressive,” assistant coach Julie Crosier said. “But what is really nice about Dylan is that during the season he can shut it off and make sure every kid scores.”

Crosier was clearly proud of the development Skandera has shown. Skandera is clearly a leader on the team and worked the whole game to get his teammates involved.

“He listens,” she added. “Whereas, when he was a freshman, he would just go for it.”

The Otters proved to be a worthy adversary, getting big contributions from Issac Derepentigny (15 points) and Peyton Chisamore (10 points). The Bulldogs had a big second quarter behind six points and a couple of steals from freshman Tyler Keyes, sending them into halftime with a 26-15 lead.

Otter Valley would come back strong and make things very interesting in the second half, winning the third quarter and getting the lead back down to single digits at 30-21.

Otter Valley carried that momentum into the fourth and made quite a bid at a comeback.

Riley Barton turned the tide for good, though, getting the ball on the low right block and banking the ball home to give the Bulldogs some breathing room as the crowd of around 100 erupted in cheer. It was the loudest they had been all game.

Saying Barton is five feet tall might be generous, but, running back down the court to get back on defense, she looked like a giant with a grin to match.

Otter Valley was able to work the lead all the way down to five, but Burr and Burton held on for the win.

In attendance for the big game was Burr and Burton graduate Joe McCoy, who in addition to his own illustrious athletic career, helped found the unified program at Burr and Burton in 2019, his junior year.

“I’m just so happy I was able to come back and experience this,” the former Bulldog and current Hobart College student said. “These guys have had a phenomenal season. There’s so much behind the scenes work that goes into it.”

McCoy would certainly know. He was juggling playing baseball while helping out with the unified team as both a junior and a senior. The smile on his face, as well as that on the face of everyone else involved, made it very clear that all of the work put forth to teach the students the game and nearly double the size of the program since its start, was well worth the time and sacrifice.

BBA advances to the South Division finals where they will play Mill River at 4:30 p.m. on Wednesday at home. The winner of Wednesday’s game moves on to play the winner of the North Division at University of Vermont’s Patrick Gym on May 25.