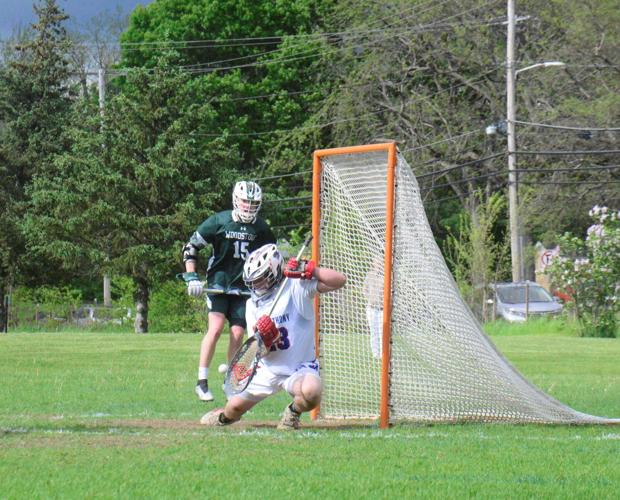 Mount Anthony goalie Hayden Gaudette makes a save during the first quarter of Tuesday's game against Woodstock. 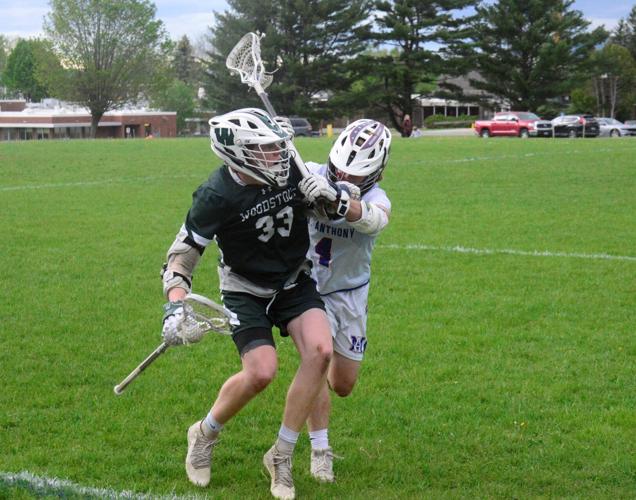 Mount Anthony goalie Hayden Gaudette makes a save during the first quarter of Tuesday's game against Woodstock.

BENNINGTON — Despite Mount Anthony lacrosse’s 19-9 loss to Woodstock on Tuesday, co-coach Paul Reif believes his team is reaching its potential with playoffs less than two weeks away.

“I really think our game overall is peaking,” Reif said.

The execution was there for the Patriots, who scored nine goals on 27 attempts, Woodstock’s domination in possessions just proved too much to overcome.

Led by their faceoff specialist Corey White, who time after time gained possession for the Wasps, the visitors controlled possession for much of the afternoon. They fired a staggering 68 shots in 48 minutes of action.

White didn’t waste any time putting his stamp on the game, earning a faceoff win on the opening whistle, quickly finding Keaton Piconi who finished with a score. The play chewed all of nine seconds off the clock while giving Woodstock a very early 1-0 lead.

Reif spoke highly of White, calling him “an All-American, in my opinion.”

The Patriots didn’t waver, largely because of the play of goalie Hayden Gaudette. The MAU senior captain made 34 saves in the loss, including 14 in the first quarter alone.

Tyler DeBoer and James Murphy put MAU on the board with a goal each in the first. The two goals brought the Patriots back within one after Piconi netted his second of six goals on the day and Sam Hambsch got in the scoring column with one of his own. That made the score 3-2 Woodstock, and the Wasps pushed for more in the winding seconds of the first quarter.

Gaudette was all over the place protecting the cage, dropping to the ground to make save after save. Woodstock fired four shots in the final 15 seconds of the quarter, and Gaudette stopped them all in what was a momentum-building moment for MAU.

He screamed as he ran off the field and toward the sideline at the end of the quarter while his teammates embraced their senior captain. It gave the Patriots a jolt of energy and the confidence it needed to close the quarter.

That effort just wasn’t sustainable through four quarters. Woodstock continued to pepper the goal with shots and while Gaudette stopped many, he couldn’t stop them all.

Woodstock added five goals in the second quarter, and MAU needed some offense to stay within striking distance.

Trailing 5-2 at the 7:25 mark of the second quarter, Reif called his first timeout of the game. He drew up some action in the huddle, and it paid immediate dividends for the Patriots. Nate Potter was the beneficiary, as he roped one into the back of the net just seven seconds later.

Woodstock answered with three straight goals to build its lead back up to 8-3, and with 2:02 left in the first half Reif burned his final timeout of the half.

MAU once again scored just six seconds out of the break in action. This time, DeBoer was fed in front of the net by Cam Cummings to make it 8-4.

MAU pulled within two goals early in the second half thanks to scores from Aiden Moscarello and DeBoer’s third and final score of the afternoon. Collin Bevin set up DeBoer this time, running the length of the field before finding the MAU attack near the net with 9:41 remaining in the third quarter.

Woodstock responded by closing out the quarter on a 4-1 run, extending its lead back up to 12-7.

The Wasps put the game away early in the fourth quarter on a three goal streak in a 90 second span, two of which courtesy of Piconi.