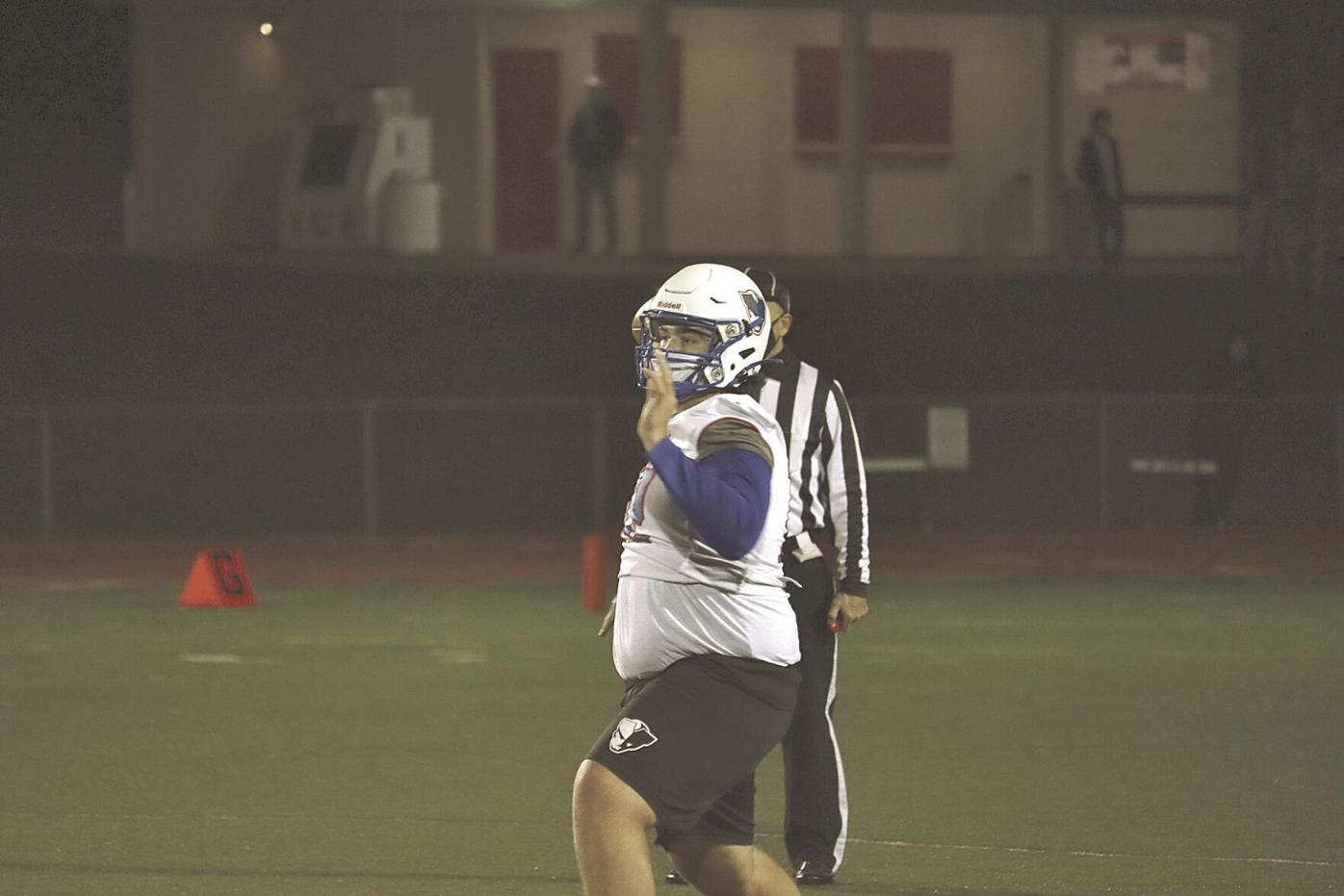 Mount Anthony quarterback Caleb Hay looks for a receiver during the Patriots regional championship matchup with Rutland on Wednesday night. 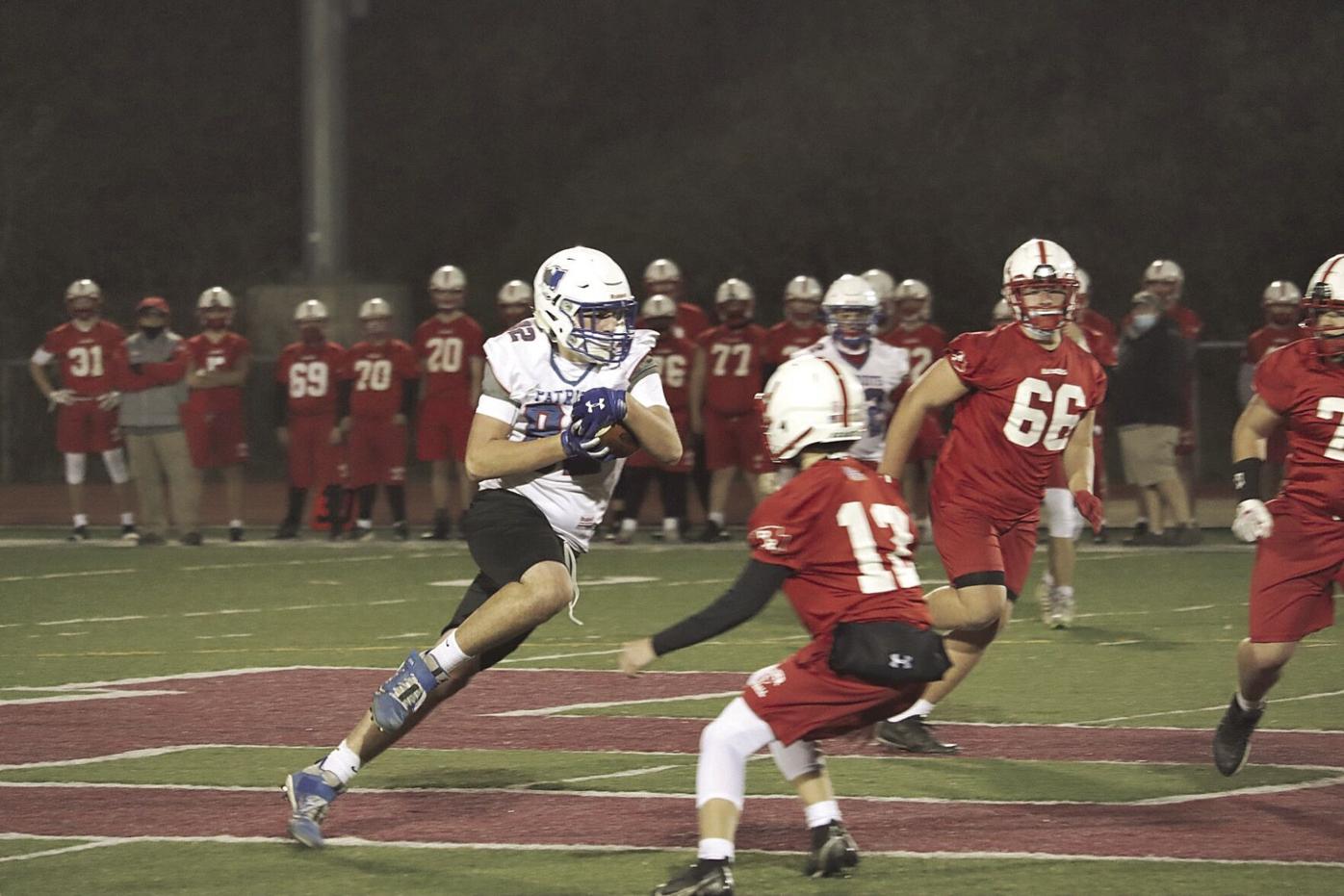 Hayden King hauls in a reception during the Patriots 28-14 loss to Rutland on Wednesday night. 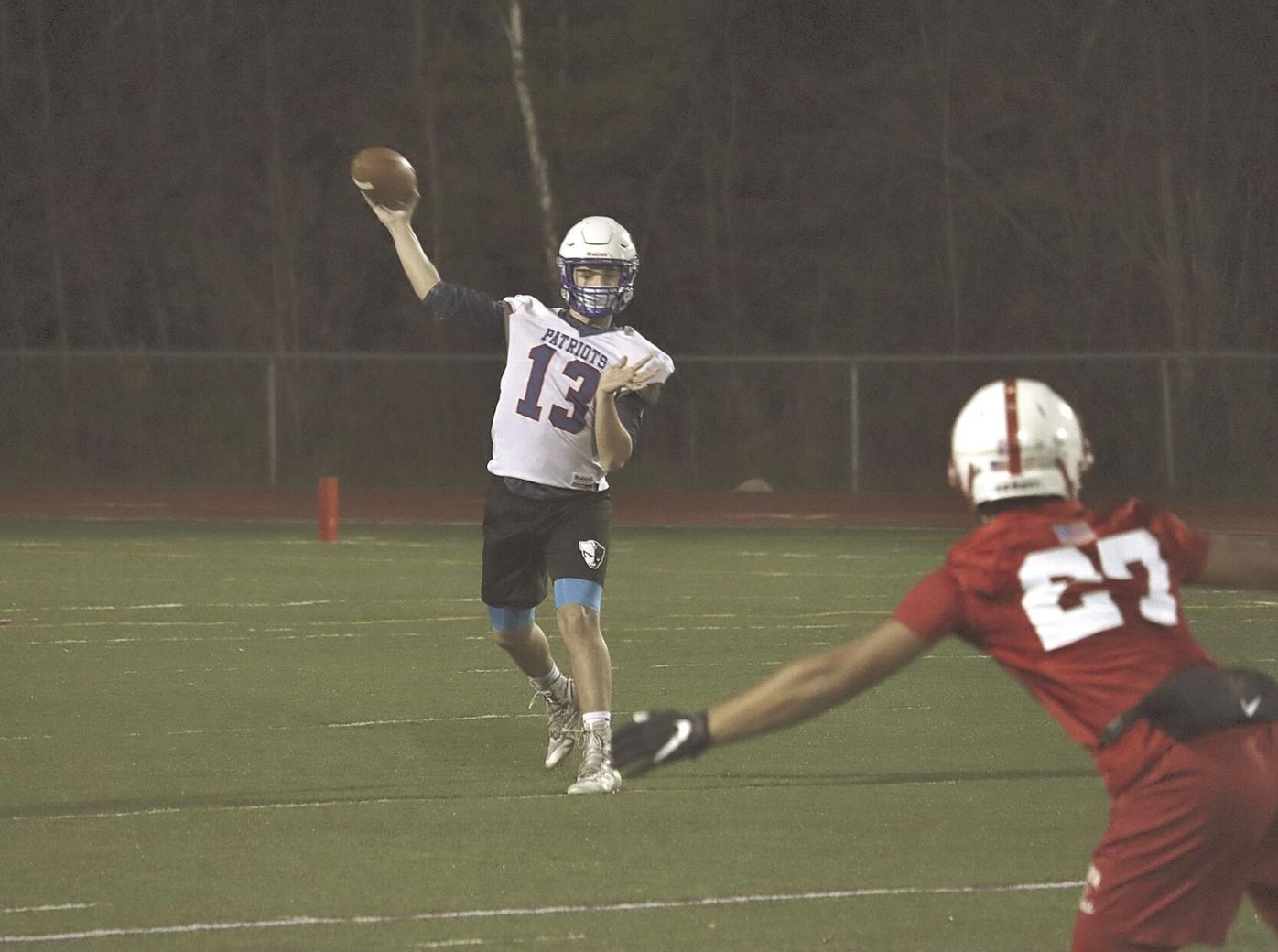 Braeden Billert sets for a throw against Rutland in the regional championship. 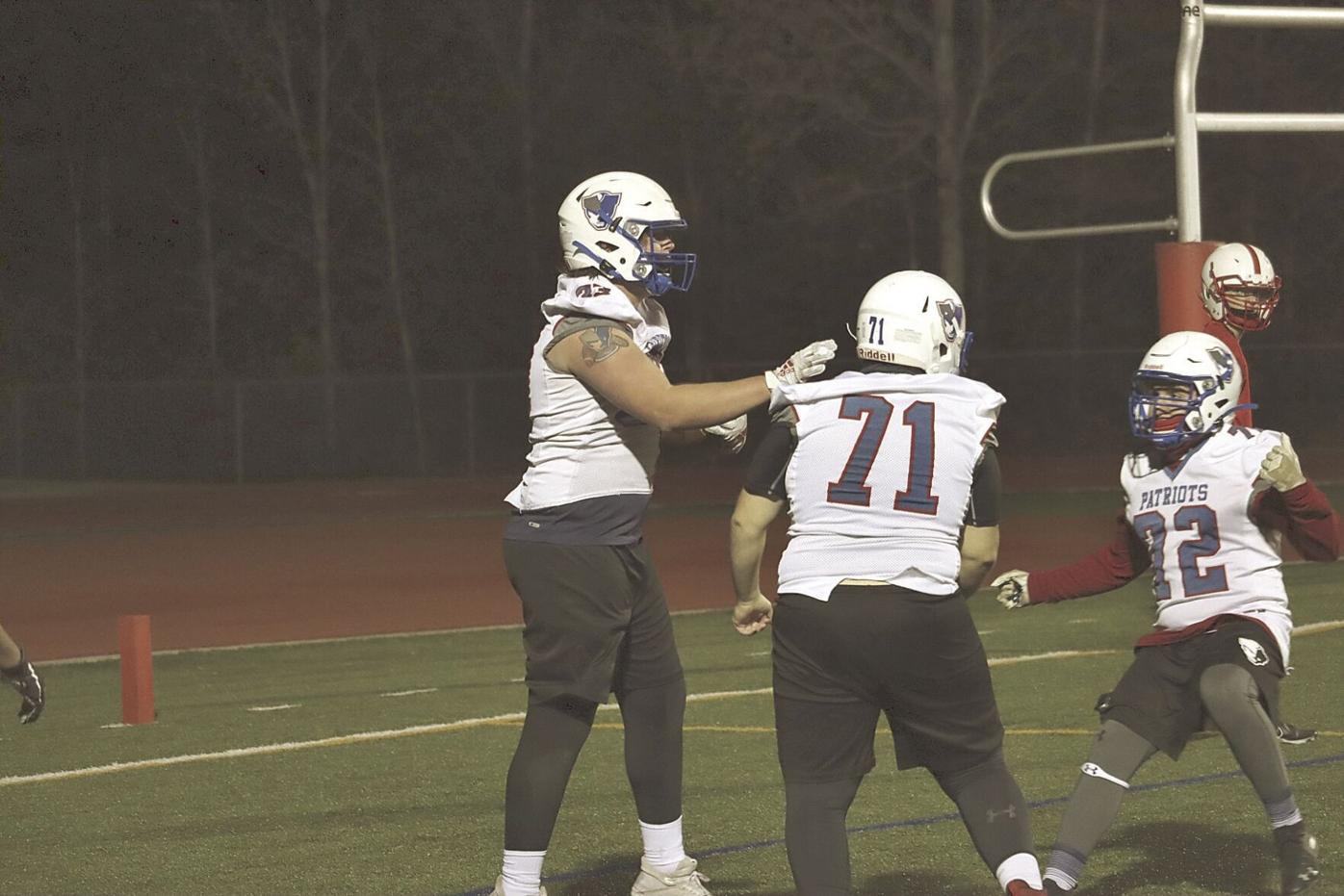 Hayden Gaudette celebrates with his teammates in the end zone after hauling in a touchdown in the third quarter of the Rutland regional championship. 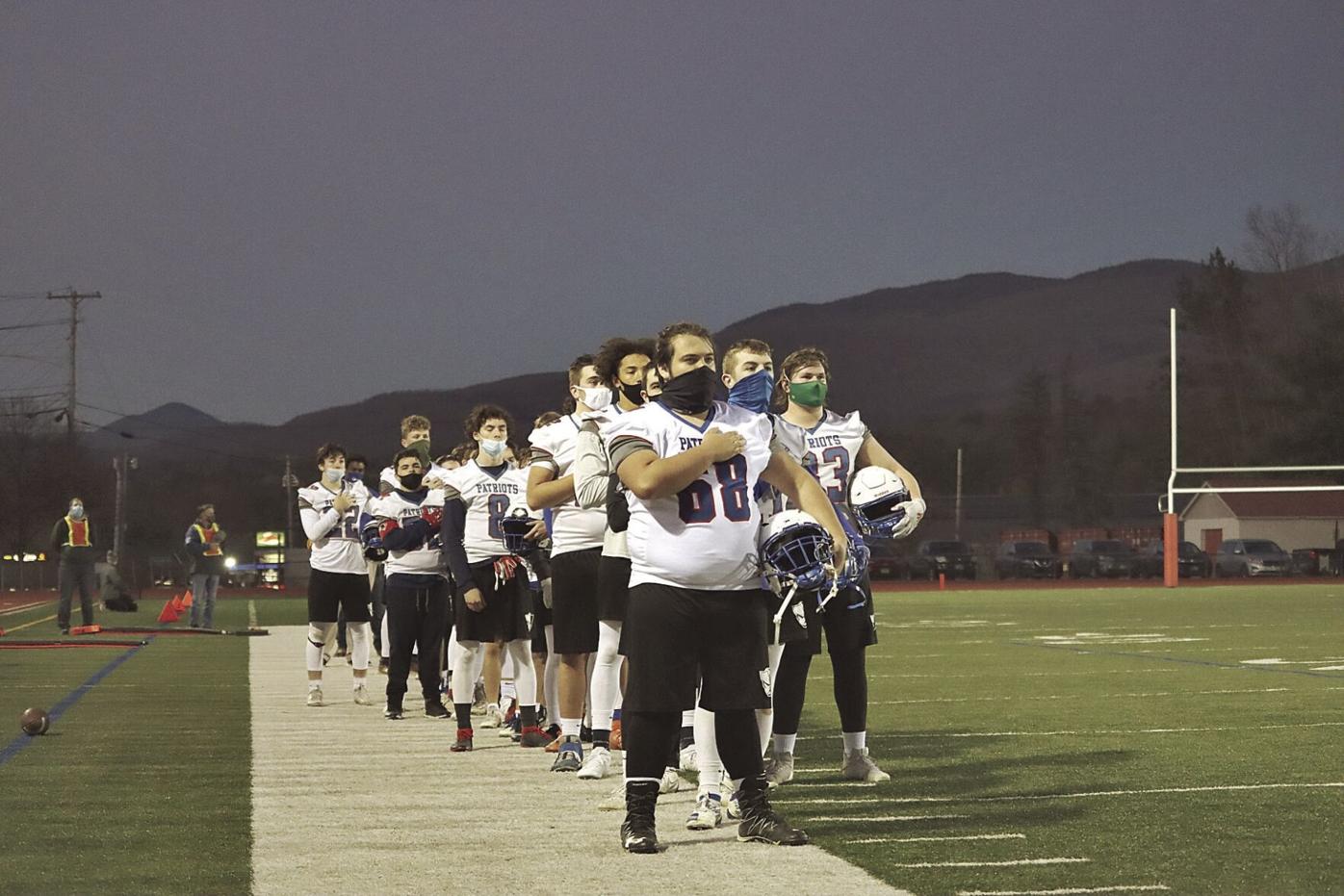 The Mount Anthony football team stands for the national anthem prior to its regional championship matchup with Rutland.

Mount Anthony quarterback Caleb Hay looks for a receiver during the Patriots regional championship matchup with Rutland on Wednesday night.

Hayden King hauls in a reception during the Patriots 28-14 loss to Rutland on Wednesday night.

Braeden Billert sets for a throw against Rutland in the regional championship.

Hayden Gaudette celebrates with his teammates in the end zone after hauling in a touchdown in the third quarter of the Rutland regional championship.

The Mount Anthony football team stands for the national anthem prior to its regional championship matchup with Rutland.

RUTLAND —Mount Anthony football played in a championship game for the first time in over two decades on Wednesday night.

The result wasn’t the one the Patriots were looking for, falling 28-14 to Rutland, but coach Chad Gordon said this season will be a building block for the program.

The Patriots offense was held in check in the first half, only throwing for 72 total yards.

Braeden Billert threw 6-for-10 in the opening quarter as he quarterbacked MAU’s big skills, throwing for 32 yards in the first quarter. Billert also threw two interceptions in the opening frame.

The Raiders turned those two turnovers into a pair of touchdowns, jumping out to an early 13-0 lead.

On Rutland’s first offensive play, a MAU miscommunication on the defensive side of the ball led to a Rutland player being left wide open. The Raiders took advantage of the opportunity, scoring a 65-yard touchdown.

Rutland tacked on a long 94-yard drive toward the end of the second quarter, moving the ball efficiently as Raiders took less than three minutes off the game clock. They finished the drive with a score, and after a successful two-point conversation, the home team found themselves ahead 21-0 at the half.

MAU had a chance to make it a one-score game late in the third quarter. Hayden Gaudette had a dominant quarter for the big skills.

Gaudette caught three passes on the Patriots opening second half possession, the last one being an acrobatic diving grab in the end zone to get MAU on the scoreboard.

Gaudette then made a huge defensive play, deflecting a pass away from a Rutland player who had separated himself from the MAU defense:

MAU got the ball back, looking to bring it back to a one-score game as the game shifted to the final quarter.

The Patriots strung together a couple plays, getting the ball into Rutland territory.

MAU made a juggling catch on third and 10 to extend the drive, but the play was called off as MAU was flagged for offensive pass interference.

MAU would turn the ball over a couple plays later, and Rutland scored another touchdown off a MAU turnover, extending their lead 28-7 with 1:32 to play in the third quarter.

MAU added a touchdown in their final offensive possession of the season, as Hay connected with Jack Ware for a 18-yard score with less than 40 seconds left in the game, bringing the score to 28-14.

Rutland came back out in victory formation, as its quarterback dropped to a knee and Rutland claimed the regional title.

Rutland coach Mike Norman said after the victory that he was just glad to have a season, as football was anything but a guarantee with the coronavirus pandemic.

“I think the big winners this year are keeping football alive,” Norman said. “Giving our seniors an experience that they can always remember, and trying to bring our young kids along and try to keep them involved with football.”

Rutland and MAU had faced off two times prior to meeting in the championship this year, with each team coming away with a victory.

Norman said if the two teams were to play a 10-game series, each school would likely come away with five wins.

“Take your hat off to Mount Anthony, they had a great year,” Norman said. “We were just able to make a couple plays tonight.”

Gordon said he was impressed with how his team responded to the uncertainty of having a football season.

“These guys never quit, no matter what they showed up and worked,” Gordon said. “And that’s character.”

The fourth-year MAU football coach said that there is a lot he will take away from his 2020 team.