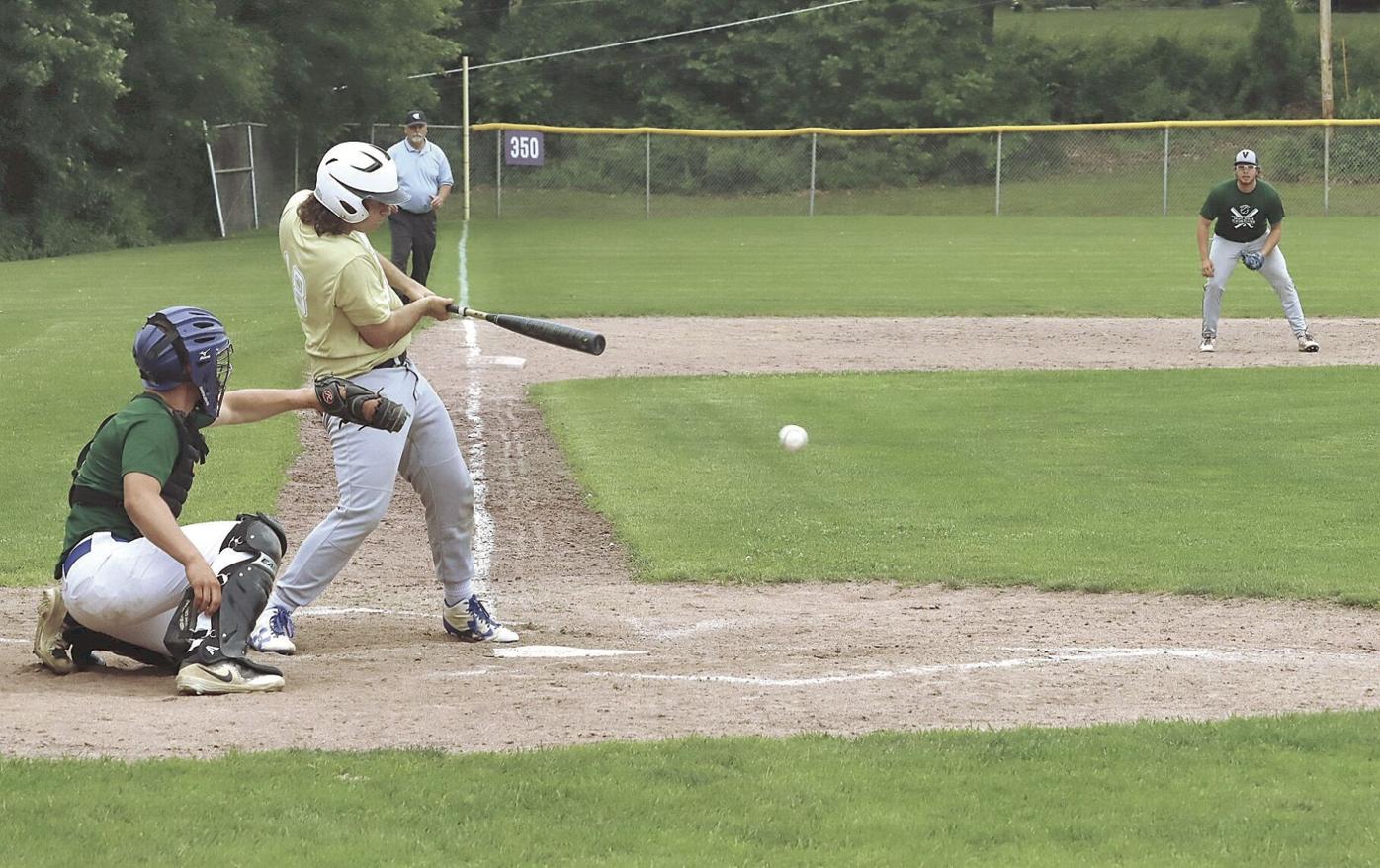 Arlington’s Dylan Wright hits the ball during the first game of the North-South doubleheader. 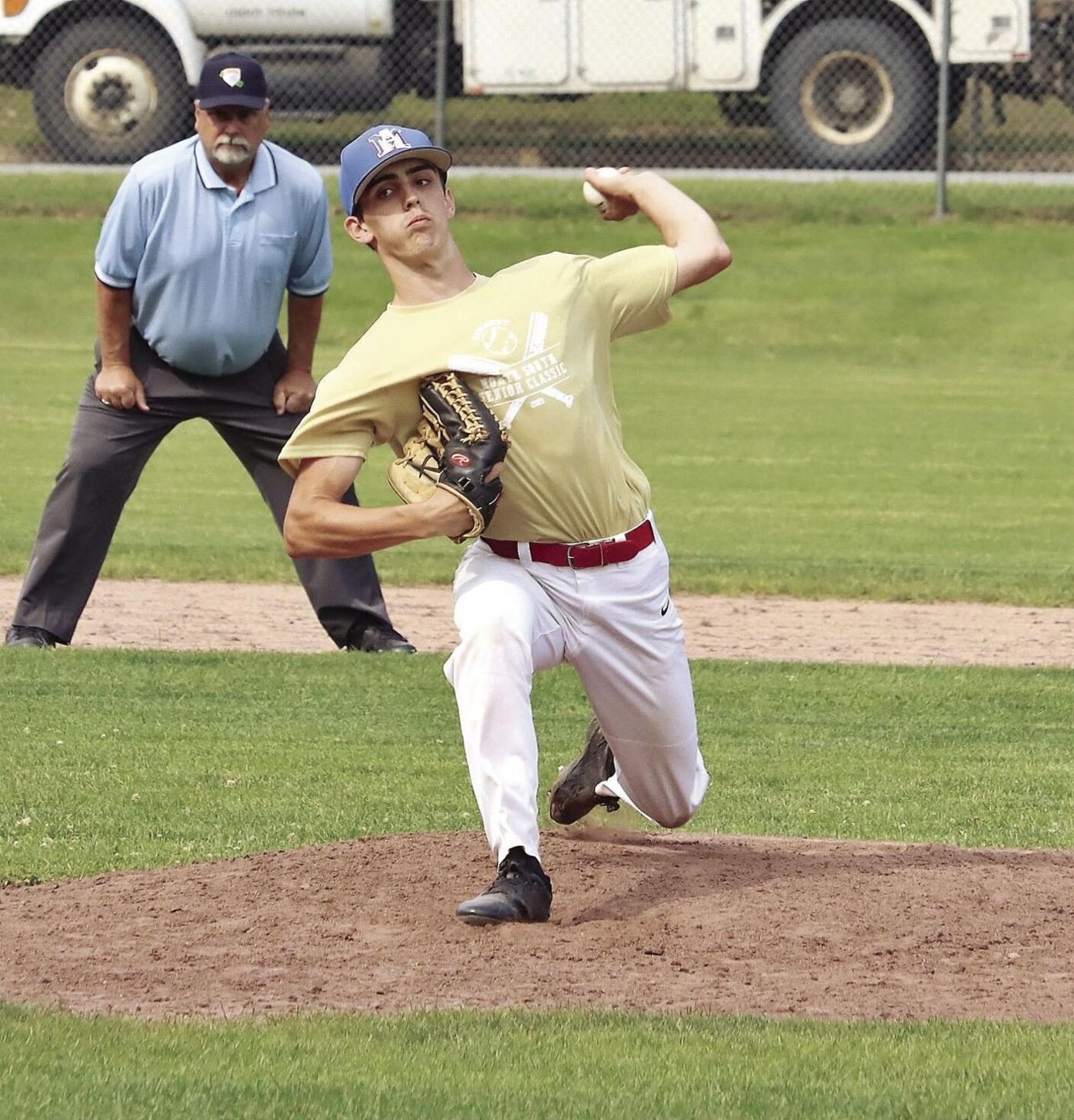 Mount Anthony’s Ethan LaBatt got the start in Game 1 of the North-South doubleheader.

Arlington’s Dylan Wright hits the ball during the first game of the North-South doubleheader.

Mount Anthony’s Ethan LaBatt got the start in Game 1 of the North-South doubleheader.

WESTMINSTER — A big inning in each game propelled the North to a doubleheader sweep of the South in the 2021 Vermont Baseball Coaches Association North-South Senior Classic at Bellows Falls Union High’s Hadley Field. The North won the lidlifter 11-3 and then took the second game 12-1.

The North scored early and often in the opener, with two in the first, six in the second and two more in the third. Justis Orton of Enosburg Falls drove in three in this span and Shreyas Parikh of Mount Mansfield knocked in two, each with a pair of RBI singles. Back to back doubles by Ryan Eaton of Champlain Valley and Spaulding’s Zack Stabell added two more in the third and a double by Parikh capped the North’s scoring in the fourth.

The South rallied with single runs in the fourth, fifth and sixth behind hits by Brandon Burns of Burr & Burton, Curtis Barry of White River Valley, Jonah Boyea of Mill River, and a pair of singles by Ryan Alt of Poultney, including a two-out RBI hit to cut it to 11-3.

North starter Christian Vallee of BFA St Albans and Cole Tarrant of Rice Memorial combined for three scoreless frames on the mound. Alt (2.1 innings) and Ethan Lawyer of Windsor finished with three shutout innings of relief for the South.

The North rapped out 14 hits with Orton and Parikh each with three while Eaton had two. Alt had three of the South’s 11 hits in the opener while Elliot Graham of Bellows Falls added two and Boyea twice reached safely with a hit and a walk.

In the nightcap, starters Jarrett Muzzy of Vergennes and Mount Anthony’s Brodie Krawcyck each pitched two scoreless innings before the North broke through with five in the bottom of the third. Singles by Marshall Donahue of Montpelier, Tucker Stearns of Vergennes and Vallee fueled the rally along with three walks.

The North sent 13 hitters to the plate in the fifth to break it open. Eaton’s long RBI double to left capped the seven-run inning that featured six hits, two walks and a sacrifice fly. Alt doubled home Alex Polli of Otter Valley in the top of the sixth to complete the scoring.

Polli had two of the South’s four hits, Lawyer had one and Alt’s double gave him a 4-for-5 twinbill with two RBI. Stearns and Vallee (3 RBI) each went 2-for-2 as the North had 11 more hits in the nightcap. Orton was 4-for-4 in the two games while Parikh went 4-for-5 and Eaton went 3-for-5 with a pair doubles.

Special thanks to Bellows Falls Union High School for hosting the event and the VBCA coaches volunteering their services in team selections and the games.

The Twin State Baseball Classic between seniors from Vermont and New Hampshire will return to the diamond in 2021 as well as the VBCA Junior All-Star Game and Showcase.

For more information on the Vermont Baseball Coaches Association, log on to www.vermontbaseball.org