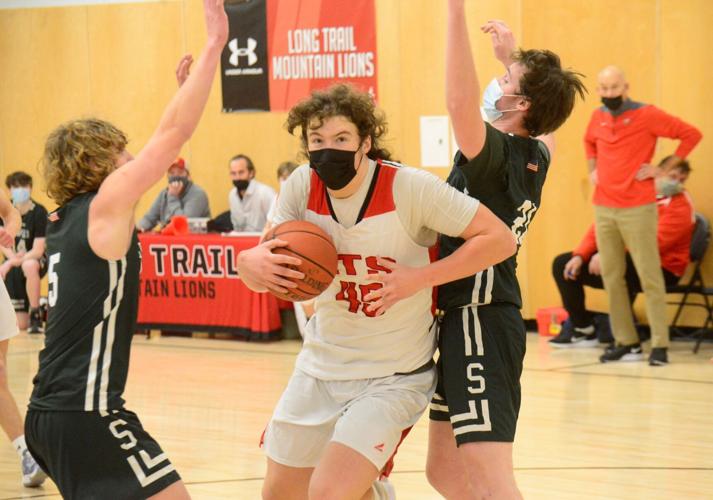 Long Trail's Ty Dickerson splits two Springfield defenders on his way to the basket during the second half of Tuesday's game in Dorset. 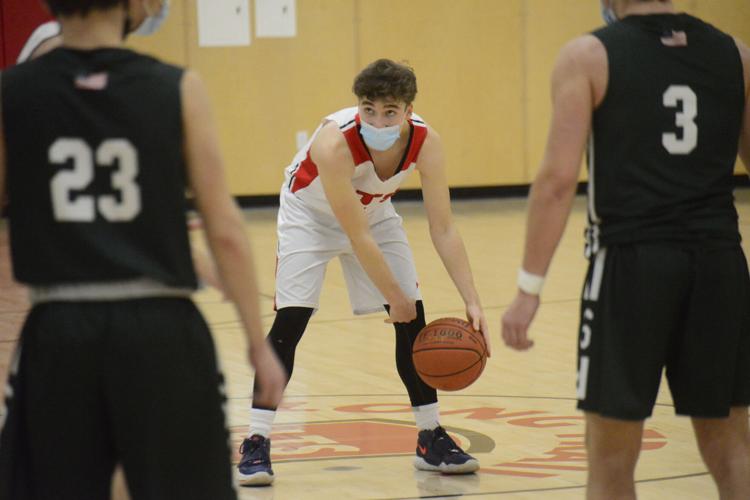 Long Trail's Tomasz Koc dribbles the ball near half court.

Long Trail's Ty Dickerson splits two Springfield defenders on his way to the basket during the second half of Tuesday's game in Dorset.

Long Trail's Tomasz Koc dribbles the ball near half court.

DORSET — The Long Trail boys basketball team looks like a legitimate contender in Division IV this year. The Mountain Lions have enjoyed a strong start to their season, which continued Tuesday with a 65-34 win over Springfield as LTS improved to 7-1.

The key for LTS coach Mike Olson’s squad has been the play of two newcomers to the team: guard Tomasz Koc and big man Ty Dickerson. They showed just how valuable they are to the Mountain Lions’ success during Tuesday’s win.

After a slow start from both teams the game was tied 5-5 after the first quarter. Long Trail’s offense woke up in a big way, scoring 47 points in the next two quarters to take a commanding 52-25 lead by the end of the third.

Koc (20) and Dickerson (15) accounted for the vast majority of those points during the run. The duo caught fire at the end of the first half scoring the final 12 points of the second quarter.

It started with a post feed to Dickerson on the left block halfway through the quarter. The forward backed his defender down and displayed a nice touch near the rim for the score. The next two LTS buckets were more of the same, followed by a floater in traffic off the right fingertips of Koc. Dickerson hit one of his two free throw attempts the next trip down the floor. The half ended with a solid screen from Dickerson at the top of the key, freeing Koc from his man and allowing the senior guard to splash a 3-pointer in the closing seconds. The make grew the Mountain Lion lead to double digits, 27-16, by halftime.

Olson realizes that having two players he can rely on night in and night out to put the ball in the hoop is a luxury.

“Ty, he’s a force inside and he’s growing as a player.”

As for Luc, Olson appreciates how he has command of the offense.

“He’s a very good player, and he plays within a team concept.”

It is Luc’s first full season with the Mountain Lions, but the senior guard did play in a handful of games toward the end of last season after enrolling at LTS from Poland.

LTS outscored Springfield 25-9 in the third quarter, putting to rest any hope of a second half comeback.

Long Trail returns to the court Friday with a 6 p.m. game at Proctor.