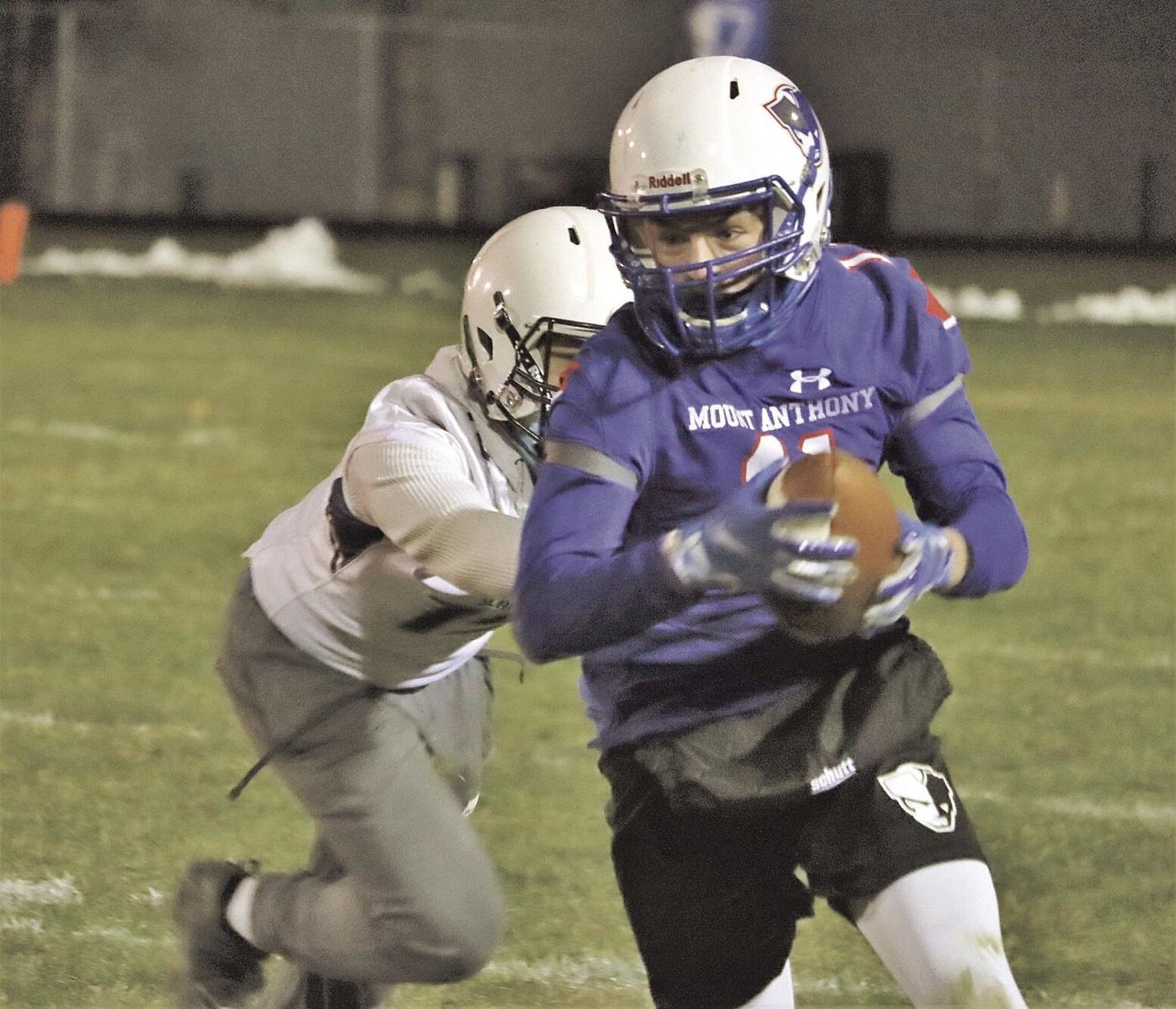 Mount Anthony receiver Austin Grogan catches a pass during the second half of their game versus Fair Haven. 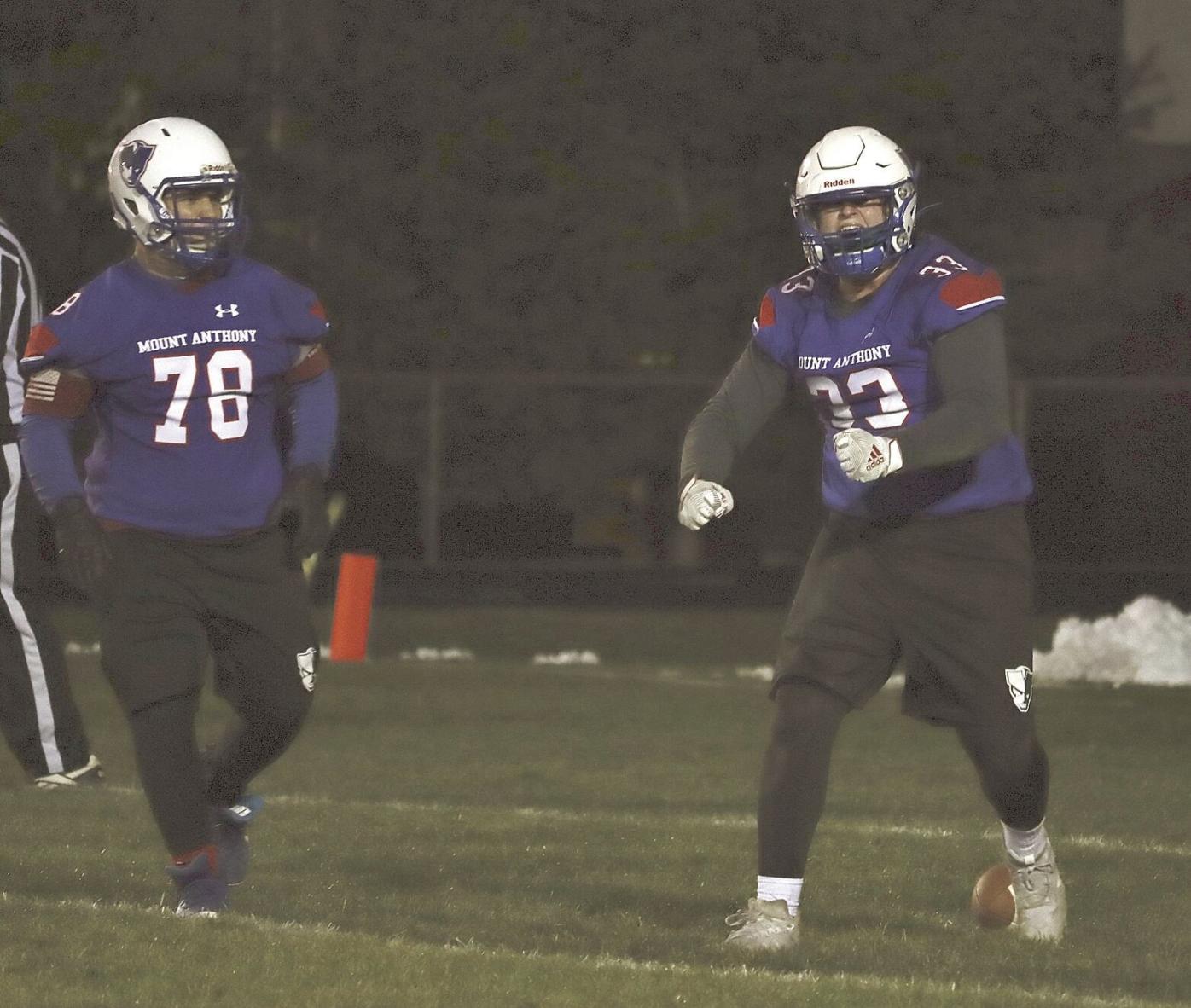 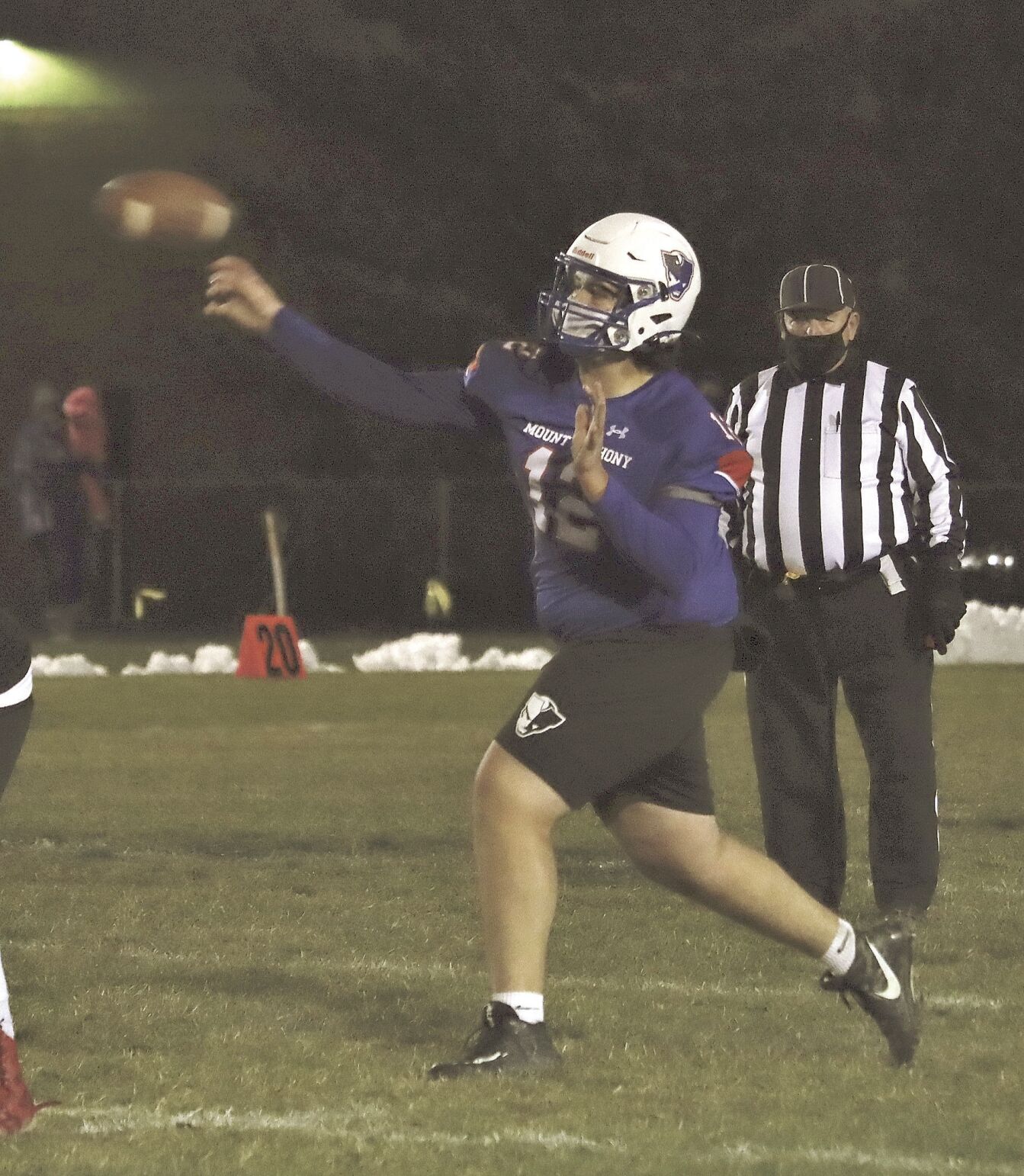 Mount Anthony receiver Austin Grogan catches a pass during the second half of their game versus Fair Haven.

BENNINGTON -- In a game that featured 125 combined points, Mount Anthony's season came down to one single defensive play during their Rutland region semifinal matchup on Friday night against Fair Haven.

Down by one after scoring a touchdown in the third overtime, Fair Haven coach Jim Hill decided to go for the two-point conversion and the win.

On the try, Fair Haven quarterback Sawyer Ramey rolled right, stopped, scanned the field and fired a missile into the end zone. A couple Patriot defenders were in coverage and knocked the ball away to send the MAU sideline into celebration with a 63-62 victory at Spinelli Field.

Before the attempt, Hill said during the timeout he asked his players, and every single one of them said they wanted to go for the two-point conversion. The coach agreed and they put the fate of their entire season on the conversion opportunity.

"I have 100 percent confidence in them," Hill said. "Kudos to the Mount Anthony kids, they made a nice play."

And on a night where MAU allowed 62 points, the Patriots defense stood tough on the final play of the game.

"We needed to make one play, make the play and the game's over," MAU coach Chad Gordon said. "And they made the play."

The overtimes provided dramatic action on both sides of the field. After regulation ended at 42, both teams scored on their first chances in OT.

Fair Haven started the second OT with the ball, and immediately put the ball in the end zone, taking a 56-49 lead and putting all the pressure on the MAU offense.

Two incompletions and a Jack Ware catch put MAU at the 1-yard line, looking for another yard to extend their season.

On fourth and goal from the one, MAU quarterback Caleb Hay found Austin Grogan in the back of the end zone. Grogan got vertical, and came down inbounds for the clutch catch. Grogan sacrificed his body, as he stayed down on the field for a few moments after the catch as he was shaken up on the play.

With the touchdown, MAU trailed 56-55, needing a successful extra point to extend the game into a third overtime. The anticipation built during the injury timeout. Gordon said he also debated about going for two earlier in overtime, but ultimately decided to kick the extra point instead.

Hay, who has served as MAU's kicker for their past two games, kicked it just over the uprights, tying the game at 56-56.

It was a battle at Spinelli Field all night long between the two evenly matched teams.

MAU jumped out to an early 14-0 lead in the first quarter. Hayden Gaudette scored the Patriots' first two touchdowns of the game, making a diving catch on the first and then punching another in from one yard out.

Gaudette also gave MAU a boost in the first quarter by getting his hands on an interception on Fair Haven's first offensive possession.

Connor Barrett fell down at the one yard line after making an impressive diving catch, setting up Gaudette's second score. Barrett also added a first quarter interception, and it looked like MAU might run away early up 14-0 in the first eight minutes of the game.

Fair Haven wouldn't back down, though, and by the time skill players took the field in the second quarter, their offense was flowing smoothly, putting 14 points on the scoreboard in the quarter.

Hay connected with Ware for a three-yard touchdown to end the first half and give MAU a 28-14 heading into the break.

Hay finished the night completing 24-of-38 pass attempts for 259 yards and six touchdowns.

Gaudette's busy night wasn't done, as the junior showed his athleticism by hauling in a contested 40-yard touchdown grab. It was a 50-50 ball and Gaudette made sure he was the one to come down with it.

His score with seven seconds left in the third once again gave MAU the lead, 35-28.

Fair Haven and MAU traded scores on the following three possessions in the fourth quarter. The scoreboard read 42-42 with 3:52 left in regulation and MAU taking over on offense.

The Patriots sustained a three-minute drive but it stalled with under a minute to go. MAU failed to convert a fourth down and gave the ball back to the Slaters on their 39-yard line with 9.3 seconds remaining.

Fair Haven completed a 14 yard pass, and quickly called a timeout with 2.7 seconds left. A desperation pass fell to the ground with zeros on the clock, sending the game to overtime.

Both coaches praised each other after the hard-fought game.

"I've got a lot of respect for coach Hill, he's one of the best coaches in the state," Gordon said. "I give him all the credit in the world for going for two there."

Hill had a similar sentiment.

"I got a ton of respect for this program and their whole coaching staff," Hill said.

Fair Haven's coach rolled the dice going for two, and it didn't work out in their favor. Hill wants his players to not be afraid to fail.

Hill said he couldn't be prouder of his team despite the loss.

MAU now sets their focus on Rutland, who they will face in the regional championship. It's the first championship game appearance for the Patriots since winning the Division I championship in 1994, Gordon's junior season.