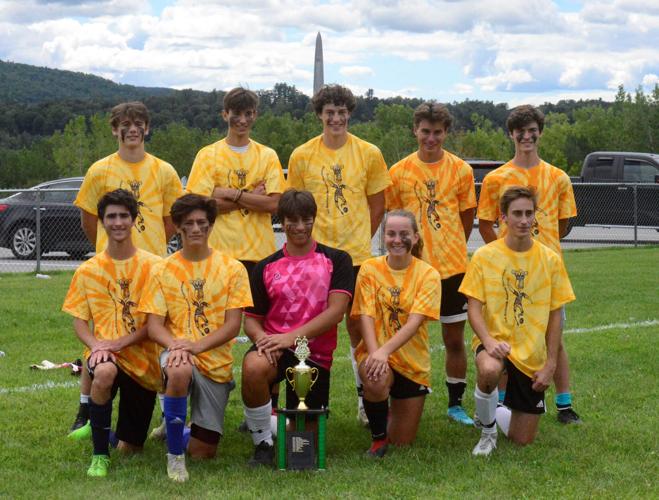 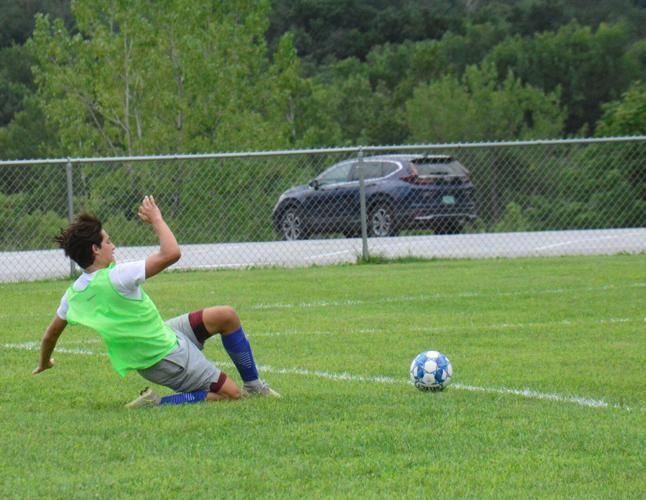 A player slides toward the soccer ball during Saturday's action. 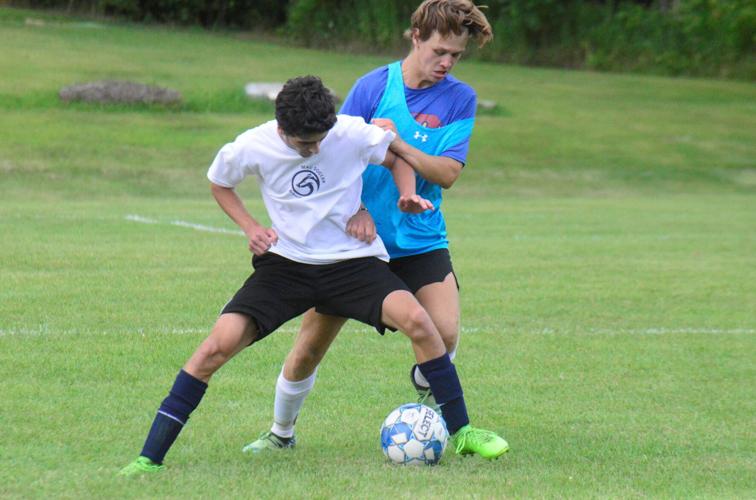 Players battle for position and control of the ball during Saturday's Lee Goldsmith Memorial soccer tournament.

A player slides toward the soccer ball during Saturday's action.

Players battle for position and control of the ball during Saturday's Lee Goldsmith Memorial soccer tournament.

BENNINGTON — The 13th annual Lee Goldsmith Memorial soccer tournament was held at Willow Park on Saturday morning into the early afternoon. One of two Mount Anthony squads entered in the tournament took the first-place trophy for the first time since 2017.

Turnout was a bit low compared to previous years that have seen as many as nine teams entered. Besides the two MAU teams, Brattleboro entered two, as well, and Burr and Burton entered one team.

The tournament was a round-robin format, with MAU and Brattleboro each sending a team to the finals. MAU was dominant in the finals matchup, taking a 5-1 win to get their name added to the trophy that sits on a mantle in the Goldsmith family residence.

Everything was smaller than traditional soccer at this tournament. A 40’x70’ field and smaller goals, with six field players and a goalkeeper per side. It had a very indoor-soccer feel to it besides the fact that the ball could still go out of bounds. The smaller dimensions created a lot of action and it felt like someone was always about to score throughout the 25-minute matches.

Senior Collin Bevin netted all five goals for MAU in the final match. He had a couple of rockets labeled for the corner, took advantage of a couple of rebounds given up by Brattleboro’s goaltender, and had a particularly picturesque goal after a perfect cross on the ground from teammate Silas Rella-Neill. Bevin slid to get his foot on it and redirect it past the keeper.

The style points award for the day, however, unanimously went to Brattleboro for their lone goal in the final match. Ozzie Van Hendrick successfully executed a move you’d be much more likely to find in EA Sports’ “FIFA ‘22” than on the soccer pitch — the bicycle kick. A hush came over the whole field for a second or two as everyone processed what he had just performed, the silence broken by elated teammates on the sideline.

Even video game-level theatrics weren’t enough, as MAU overwhelmed Brattleboro for most of the match. Van Hendrick’s goal was the only blemish for MAU keeper Aiden Moscarello in the victory.

Ultimately, the tournament is about a lot more than trophies, or soccer, for that matter. The tournament is in honor of soccer player and graduate of MAU, Lee Goldsmith. Goldsmith died of cancer in 2009. MAU soccer coaches Mike Molloy and Jeremy Neill have held the Goldmsith tournament every August since (with the exception of in 2020 due to COVID-19), raising money for the scholarship of the same name.

“It was 2001 that he was captain of the team, and 2002 he graduated.” Molloy explained. “He ended up passing away in 2009 and that was when Jeremy (Neill) and I were starting to take over the program… We had a discussion and decided rather than just a scholarship fund, let’s have a tournament, too.”

The Goldsmith Scholarship is awarded to a graduating MAU soccer player in his honor every year. Mick Goldsmith, Lee’s father who was in attendance to watch the games, explained that it’s not necessarily awarded to a team MVP, but to a player that espouses the qualities that Lee will always be remembered for.

“That money goes to one (and sometimes more than one) player, that coaches feel played and respected the game as a leader.” he explained. “The kids that show up for practice every day, they’re ready to go and stay the whole time and play with a certain level of respect. Playing the right way.”

Molloy was grateful for everyone that volunteered their time, helping set up and officiate the tournament. He was pleased with how his team performed, and expressed that he has several potential candidates for the scholarship this year.

“Fortunately, we have a team full of them this year,” he said. “We have a lot of good quality guys and I thought they played really well.”

The tournament, while a lot of fun and a fitting way to honor a beloved MAU soccer player no longer with us, is also a bit of a final tune-up before these Southern Vermont soccer programs start camp. Tryouts for both girls and boys soccer begin Thursday.