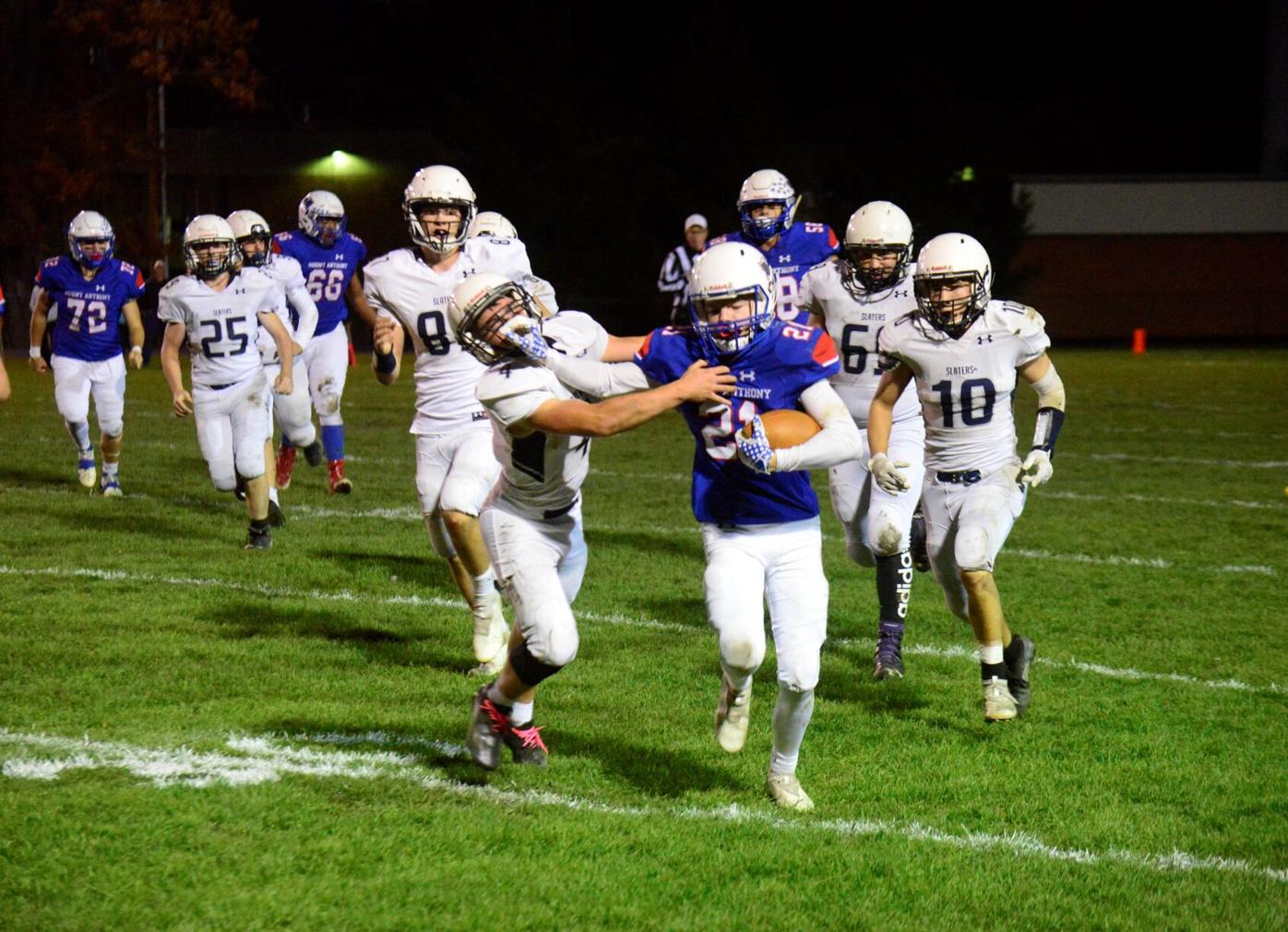 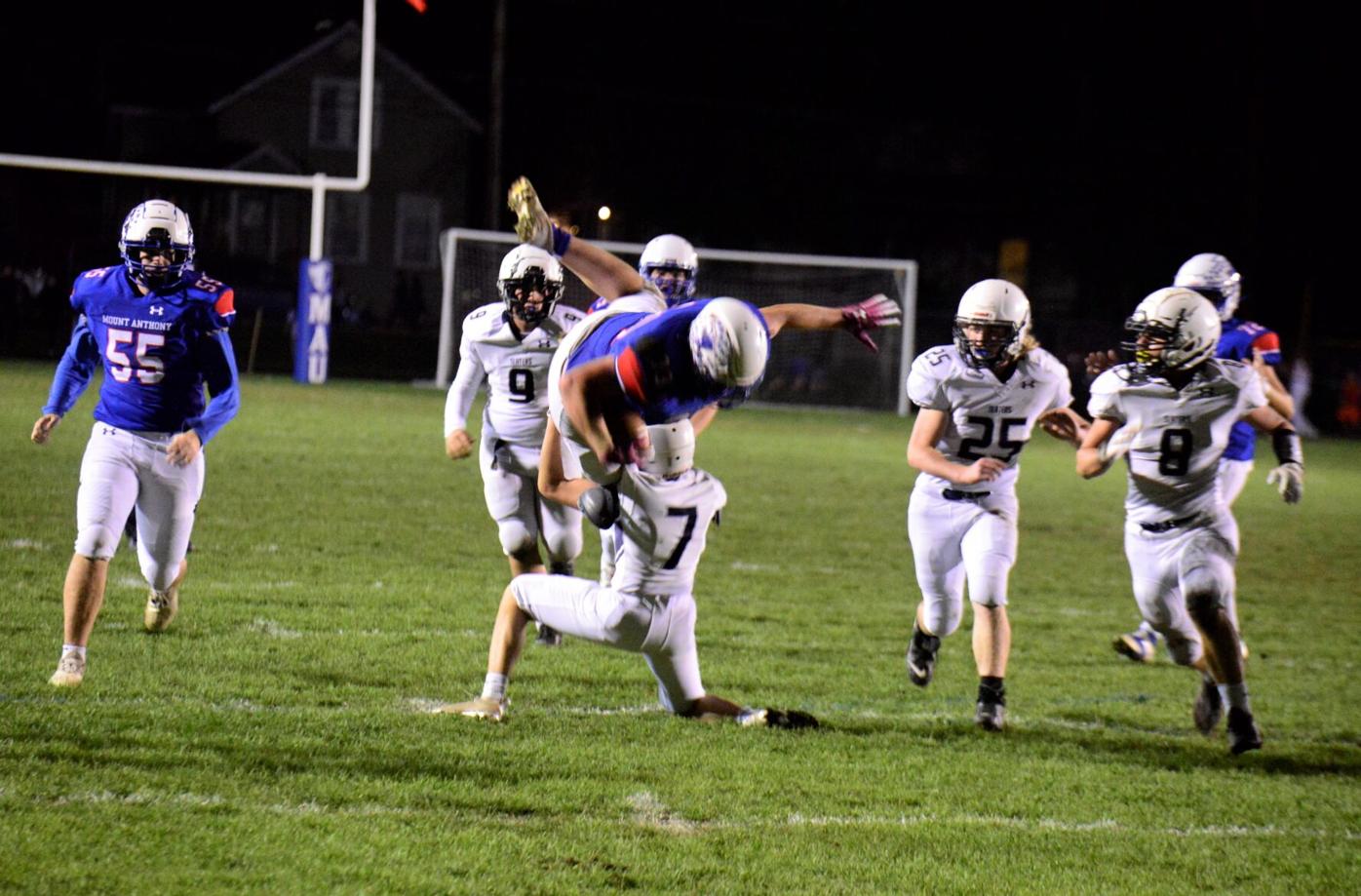 The Slaters received the opening kickoff and the Patriot defense held tough and forced a three and out. That trend continued throughout the night as MAU cruised to a 42-0 victory behind a great defensive performance and a bruising running attack.

It took MAU’s defense just two minutes and three seconds to get off the field on the opening drive of the game.

Sophomore quarterback Tanner Bushee trotted his offense out on the field and orchestrated a six play, 62 yard scoring drive and MAU was rolling not even halfway through the first quarter.

Austin Grogan took a handoff from 19 yards out and found the endzone, capping off the drive.

The score injected even more energy into the stout Patriots defense. They didn’t let Fair Haven pick up a first down until midway through the second quarter. The Slaters’ offense lost seven total yards on their first 13 offensive plays of the game. The highlight of that stretch was Fair Haven’s fourth offensive possession. Gavin Schnoop got to Slaters quarterback Joe Buxton on first down for a nine yard sack. Buxton then threw an incomplete pass on second and long. Then, it was Sean MacDonald’s turn to take down Buxton behind the line of scrimmage for another sack.

MAU coach Chad Gordon said the Patriots defense has been leading the way as of late.

“(Against) Rice, we gave up one score last week and in the second half of the BBA game we only gave up the one score, so (our) defense has really been carrying us.”

That’s not to say the offense didn’t do its thing. Led by Ayman Naser’s knack for the big play, MAU’s rushing attack moved the chains early and often.

Naser took a handoff from the 45 yard line to the house on the first play of MAU’s third offensive possession, scoring a 55 yard touchdown that extended the Patriots’ lead to 14-0.

It took Naser just four carries to reach the century mark. MAU’s offensive line created running lanes, and the running back took advantage. He finished the game with eight carries for 159 yards and two scores on the ground.

When it wasn’t Naser, Hayden Gaudette celebrated his senior night game by punishing Slaters defenders. Gaudette continuously ran over linebackers and defensive backs who dared to challenge him in the open field. Gaudette turned 10 carries into 93 yards and one score.

Bushee wasn’t called on to air it out much with a comfortable 28-0 lead with 11 minutes left in the second quarter, attempting just six passes all game. On his sixth and final pass attempt, Bushee connected with Grogan for a 37 yard touchdown pass on a fourth and five in the second half.

Bushee also called his own number on a read option late in the first quarter that resulted in him scampering down the right sideline for an 18 yard rushing touchdown.

MAU put a bow on the win during the first possession of the second half.

Gaudette started the half with a 35 yard rush. Naser took the following handoff and cut to the far side of the field for a 32 yard score. Less than a minute into the second half, the Patriots maintained a 35-0 lead.

The Patriots energy right now is contagious, according to their coach.

“These guys are playing with swagger. They believe that they can do it and they’re playing with that energy in practice,” Gordon said. “The seniors are pushing the juniors, the juniors are pushing the seniors and the sophomores that we sprinkle in, they’re rising up as well. It really is a full team doing everything they need to do in practice and we’re seeing the results out here.”

Playing on Thursday’s is a rarity. The MAU Fair Haven game was randomly selected to be moved from its original Friday night slot to Thursday night after it was discovered there would not be enough referees for Friday’s games.

Gordon and the Patriots clearly took the challenge of a short week in stride with their impressive win. He even went as far to thank the Vermont Interscholastic Football League (VIFL) after the win.