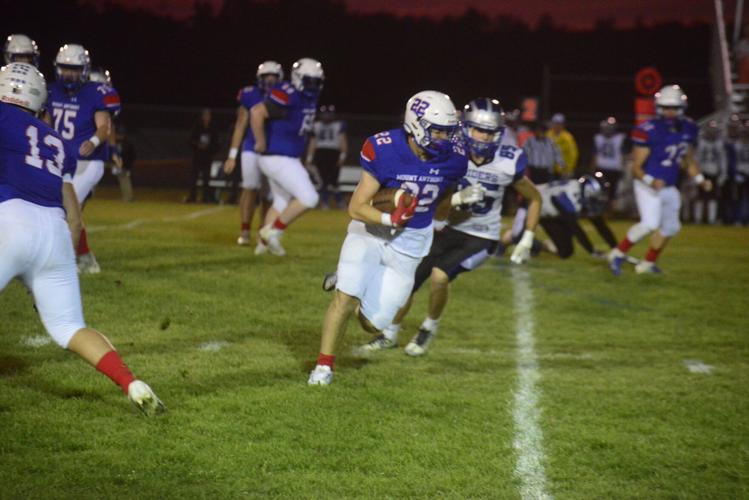 Mount Anthony running back Ayman Naser rushes the ball during Friday night's 54-0 homecoming victory over U-32. 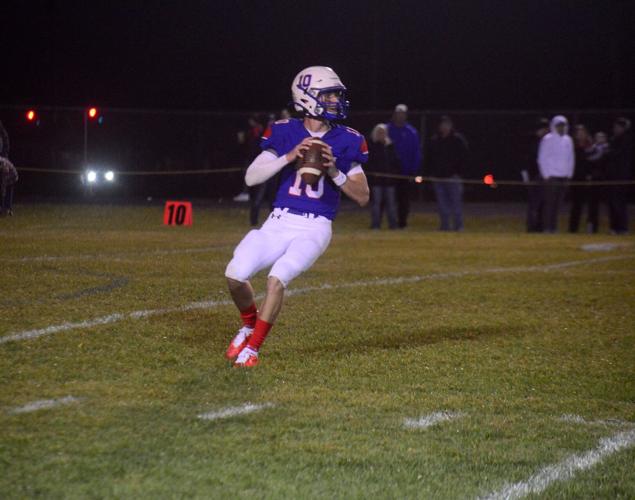 Mount Anthony running back Ayman Naser rushes the ball during Friday night's 54-0 homecoming victory over U-32.

BENNINGTON — A 54-0 victory is one way to celebrate homecoming weekend.

Mount Anthony football absolutely dominated from the opening whistle to the final snap in Friday’s blowout win over U-32 on Spinelli Field in front of a large crowd.

Patriots coach Chad Gordon had plenty to be happy about after the big win.

It was the familiar duo of quarterback Tanner Bushee and running back Ayman Naser leading the way. Bushee was nearly perfect, completing 12 of his 13 pass attempts for 203 yards and one touchdown, hitting tight end Braeden Billert (seven catches, 113 yards) on a 13 yard corner route in the left corner of the end zone with 7:23 remaining in the first half to pad the Patriots lead to 20-0.

Bushee also rushed twice, finding the end zone each time. His second score on the ground, a keeper on a read option in the first quarter, went for 47 yards.

Bushee evaded a few Raiders defenders and shook off would-be tackles of a couple more on his way to the end zone. The Patriots signal caller ran up the middle, found two linebackers waiting for him and spun out of trouble. As he completed his spin to the right, a defensive back tried desperately to take Bushee down with a low tackle, but the junior quarterback shrugged it off and sprinted the remaining 40 yards into the end zone untouched. That highlight-reel score gave MAU a 12-0 lead early in the first quarter and set the tone for the rest of the night.

Naser turned his 11 rush attempts into 132 yards and two touchdowns. He added to his already impressive stat line with an interception returned 25 yards for a TD with less than two minutes remaining in the first half, putting a bow on a dominant MAU first half, putting the Patriots ahead 34-0.

MAU showed its depth in the win, without its starting offensive tackles in David Janz and Corbyn Hayes.

Landon Quackenbush and Chris Wilder filled those roles, and were effective. They helped keep Bushee upright all game, and the always potent Patriots rushing attack remained the same, accumulating 300 yards on the ground in the win.

“We had two new tackles step in and our offense didn’t miss a beat,” Gordon said.

The defense continued to show improvements. It caused three more turnovers after forcing seven in a 46-7 thumping of Mount Mansfield last week. Gordon said that’s been a point of emphasis as the year has progressed.

“We do our turnover circuits (in practice) and we hand out the helmet stickers. I think we were negative three going into last week and I said we need to and if that means me giving out extra helmet stickers, I’m gonna give out extras,” Gordon said. “I ran out of stickers this past week and it looks like I’m gonna run out again.”

A good problem to have for the now 4-1 Patriots. Carter Thompson and Josh Worthington had interceptions. Billert got to U-32 quarterback Charlie Fitzpatrick twice for sacks as MAU pitched its first shutout of the fall.