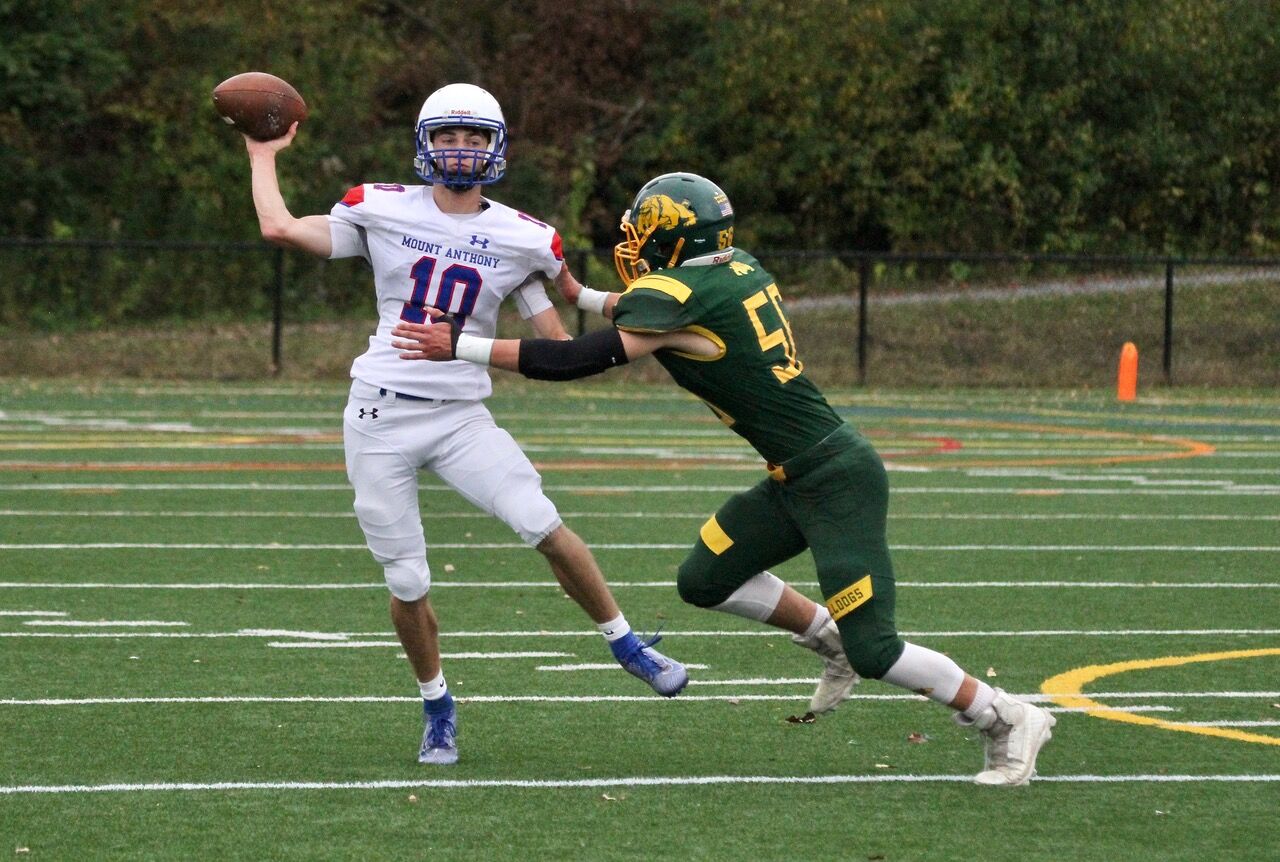 Mount Anthony QB Tanner Bushee attempts a pass during an early season match against Burr and Burton. MAU will play for the Div. II championship Saturday at 11 a.m. against Bellows Falls at Rutland's Alumni Field. 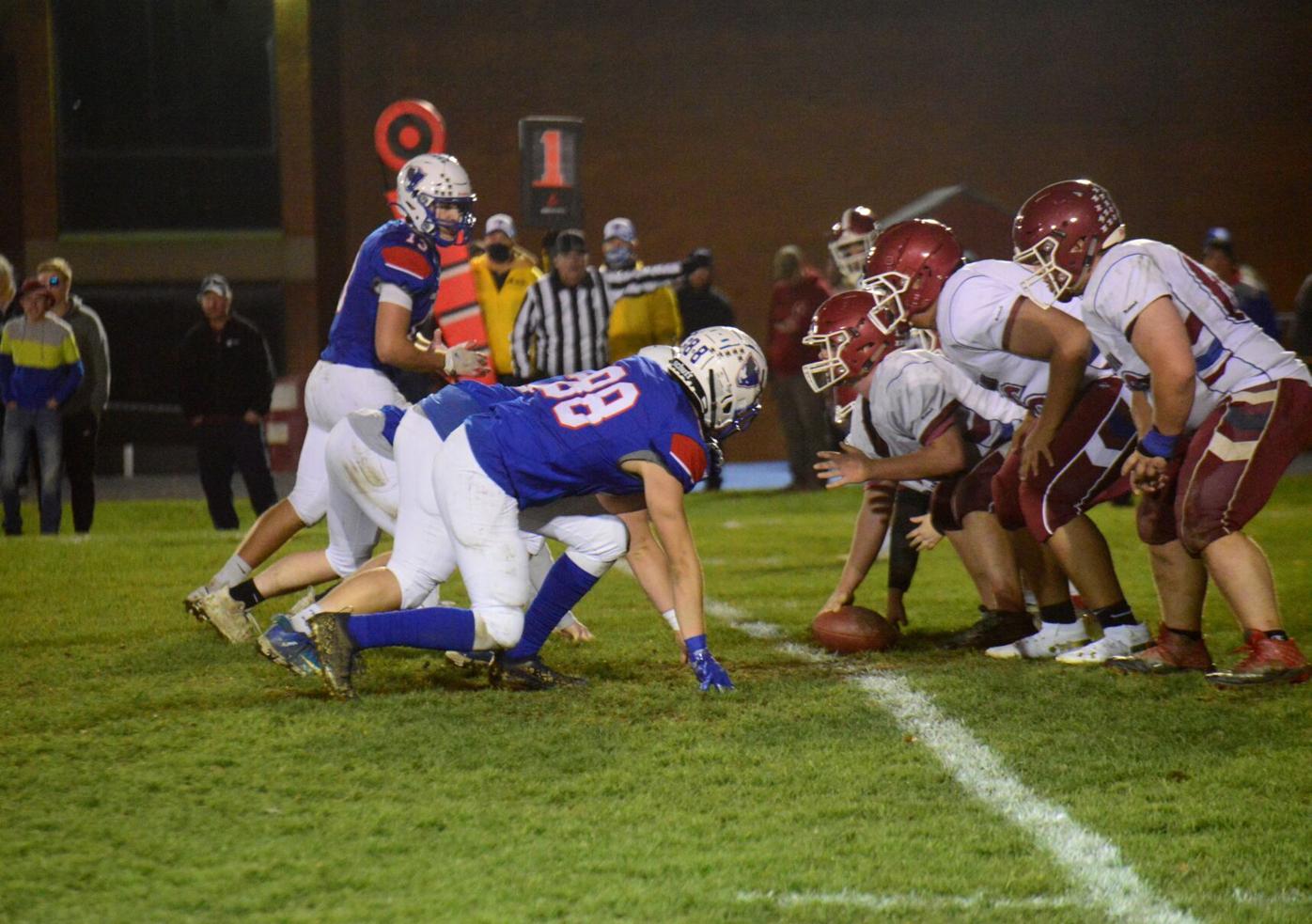 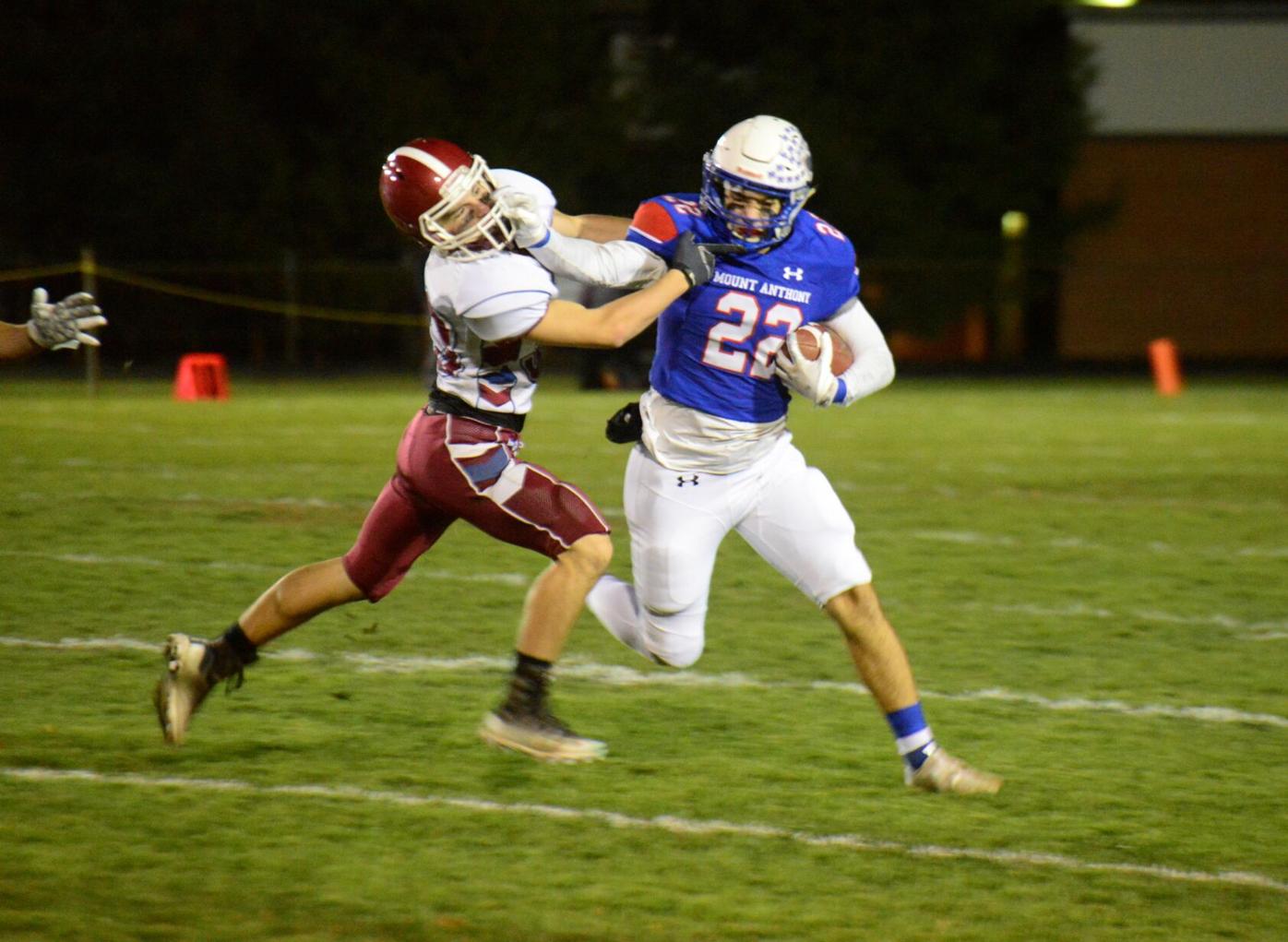 Mount Anthony running back Ayman Naser stiff arms a Spaulding defender during the first half of Friday's 27-0 MAU win.

Mount Anthony QB Tanner Bushee attempts a pass during an early season match against Burr and Burton. MAU will play for the Div. II championship Saturday at 11 a.m. against Bellows Falls at Rutland's Alumni Field.

Mount Anthony running back Ayman Naser stiff arms a Spaulding defender during the first half of Friday's 27-0 MAU win.

BENNINGTON — Mount Anthony football coach Chad Gordon began the first day of practice back on Aug. 16 with a one word message for his Patriots: belief.

“No matter what, it always starts with belief,” Gordon said.

Fast forward 85 days, and it’s clear the Patriots believe. They find themselves one win away from a Division II football championship, which would be the school’s first since 1994.

The only thing standing in the way of MAU bringing home the trophy is an undefeated Bellows Falls team, who defeated MAU 45-14 back in Week 2. The two teams face off at 11 a.m. on Saturday at Rutland’s Alumni Field.

Mount Anthony lost its following matchup against Division I Rutland in Week 3, but hasn’t lost since. The Patriots found a recipe of success offensively with Tanner Bushee at quarterback after starting the season with a competition at QB.

Braeden Billert drew the majority of the QB snaps to begin the season, but MAU made the transition to Bushee during Week 4 against Brattleboro.

Bushee has looked comfortable leading the Patriots to a 7-0 record since the switch. Billet has seamlessly slid into a role as the starting tight end, where he can use his athleticism and physicality to impact the game in a different way.

According to Gordon, the switch was about putting the best 11 players on the field at one time.

“Tanner’s done well, and it’s not that he is that much better than Braeden,” Gordon said. “Tanner has more weapons than Braeden did at quarterback.”

Bushee has responded well, as the sophomore signal caller has thrown for 16 touchdowns and 1,041 yards. Bushee has emphasized protecting the football, throwing only 2 interceptions on his 132 pass attempts this season.

He is also a threat with his legs, turning 53 carries into 356 rushing yards and six more scores on the ground. Bushee is a multi-dimensional QB. It’s fitting, as Gordon describes his entire offense as such.

“You can’t take one guy away and say ‘Hey, if we shut this guy down, we shut their offense down,’” Gordon said.

Ayman Naser is one of those guys Bellows Falls will try to take away. Naser carried the ball just three times for eight yards in the Week 2 loss to the Terriers, but has emerged as the Patriots number one back as the season rolled on.

Naser leads MAU with 775 rushing yards on 102 carries and has found the end zone on the ground eight times. He has eclipsed the 100-yard mark in three consecutive games, and four times overall this season. He runs hard, not afraid of contact, but also has the speed to burst through an opening before a defender has time to react.

The junior running back says the whole team has improved since the Patriots last saw Bellows Falls.

“I feel like we’ve gotten so much better since Week 2, we’ve progressed as a whole team,” Naser said.

Hayden Gaudette is a bruiser-back. The senior has rumbled for 416 yards and five touchdowns on 80 carries this season. He offers MAU a change-of-pace from Naser.

When Bushee airs it out, Austin Grogan is his favorite target. The senior playmaker has 35 receptions for 580 yards and eight receiving touchdowns. Grogan has taken the occasional end around or jet sweep handoff, too, and is another piece of the MAU run game.

Gordon is correct, MAU’s offense can win in a bunch of different ways. In order to knock off the undefeated Terriers, though, the Patriots defense will have to stop the run.

The Terriers’ backfield has rushed for 3500 yards and 61 touchdowns through 10 games this season. There is no question that Bellows Falls wants to run the ball early and often.

Thibodeau leads the team with 68 tackles. The junior may not be the biggest player on the field, weighing in at 125 pounds, but he brings an attitude to the defensive side of the field and is constantly around the ball.

“I like to show people that even though you’re smaller, or it’s your first year, that you can still come through and make big plays and do big things,” Thibodeau said.

Thibodeau said the key for MAU’s defense this Saturday is to bring the physicality.

“That’s our plan; we’re going to go in there, hit them as hard as we can and hopefully shut them down,” Thibodeau said.

Gaudette, Kaleb Carpenter, Billert, Josh Worthington, Grogan and Naser are other key pieces to the MAU defense. It will take a team effort if MAU is to slow down the Terriers’ run attack.

The Patriots defense has been opportunistic as of late, forcing seven turnovers in their two playoff games. MAU hasn’t given the ball away in that stretch. Gordon said ball control will play a big factor in who ends up

“If we can (force) some turnovers like we have recently, (and) if we have good ball, control ourselves on offense and limit our mistakes on defense; It’s gonna be a close game.”

When asked to look back to where the Patriots are now compared to that Week 2 matchup, coach Gordon believes his team is much improved.

“I think if we could somehow play ourselves from back then, we beat (our Week 2 team) 42-7 or something,” Gordon said.

There’s no doubt it’s a different looking MAU team. They’ve rattled off seven straight wins and find themselves in the championship game for the first time in 27 years. Despite the unfamiliarity, the Patriots remain level-headed.

Most importantly, the Patriots believe they deserve to be in this position, and they believe in their ability to finish the job according to Bushee.

“We believe that we can go out there and we can beat them,” Bushee said. “They’re just a bunch of players like us, and I feel like we’re better than them.”

MAU and Bellows Falls face off at 11 a.m. on Saturday at Rutland’s Alumni Field.