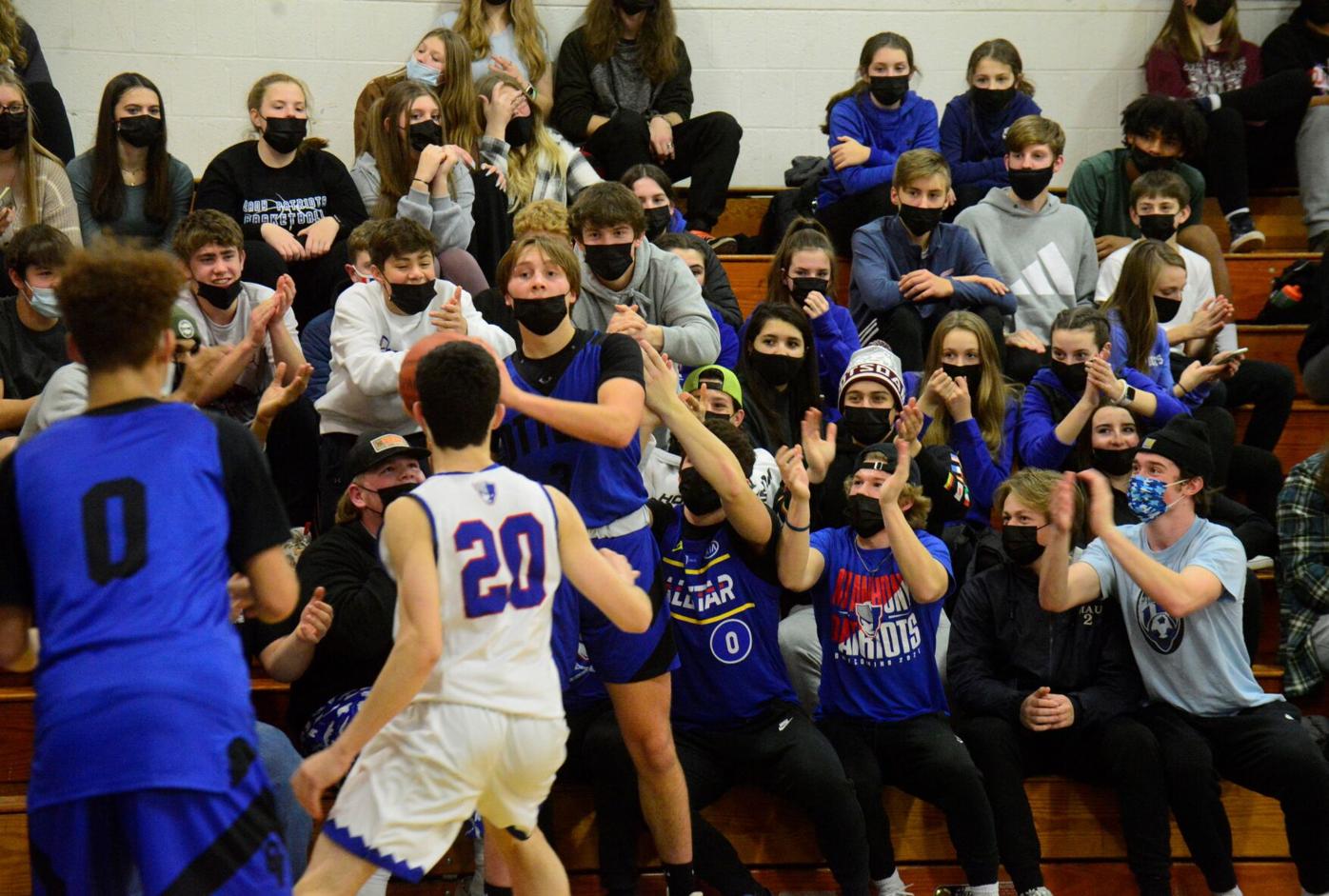 Otter Valley's Hayden Bernhardt inbounds the ball with Caz Amoroso defending and the MAU student section behind him. 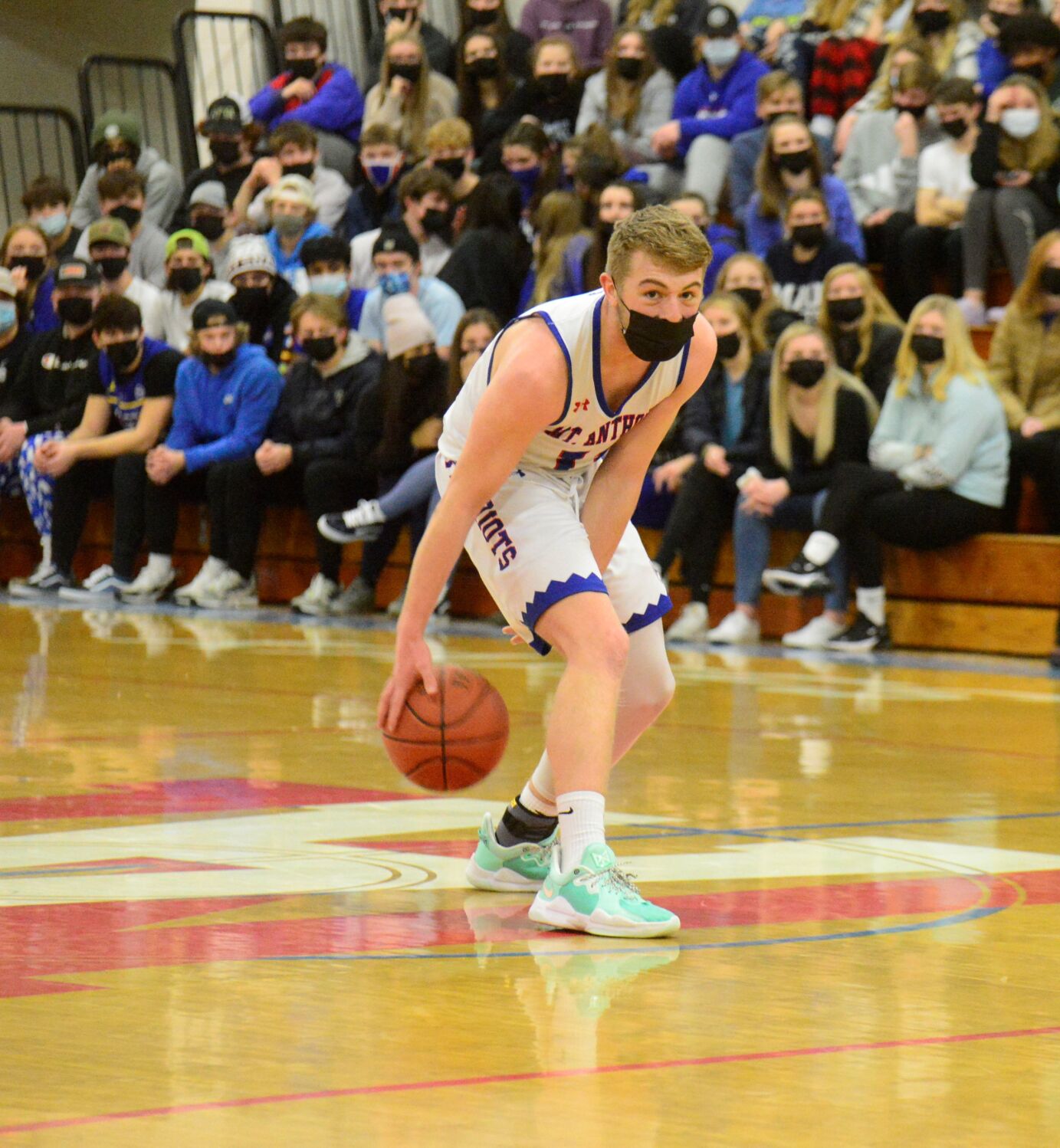 Austin Grogan dribbles between his legs.

Otter Valley's Hayden Bernhardt inbounds the ball with Caz Amoroso defending and the MAU student section behind him.

Austin Grogan dribbles between his legs.

BENNINGTON — Mount Anthony basketball looked like a team hungry for its first win of the season in the early minutes of Tuesday’s matchup with Otter Valley, building a double digit lead.

They had to hold on with the Otters catching fire offensively in the third quarter, but in the end it was MAU coming away victorious, 59-48.

The Patriots scored 10 points before the Otter’s put a tally on the scoreboard. MAU pressed after made baskets in the first quarter, forcing turnovers and making life miserable for Otter Valley ball handlers. Logan Letourneau finally broke the scoreless streak for the Otters with a make from behind the arc on the left wing with 4:37 left in the first quarter, making it a 10-3 game.

Braeden Billert made his mark early, connecting on a 3-pointer and scoring on a post touch in the first two minutes. It was a sign of things to come for the MAU junior, who scored a team-high 19 points while battling foul trouble.The forward battled in the post, banging bodies while showing a nice touch near the hoop.

MAU extended its lead to 35-17 by the half. It looked poised to take complete control of the contest in the second half, but the Otters had other ideas.

Hayden Bernhardt led an offensive surge from the visitors out of the break. Bernhardt connected on a couple 3-pointers in the third and scored 12 of his 16 points in the quarter. Owen Thomas added seven of his 18 points in the third. The Otters’ offense flowed on their way to a 22 point third quarter, bringing the visitors back within 10, 49-39, by the start of the fourth.

MAU has had its leads this season. They tend to start games fast. On Tuesday, they were able to hold on and secure its first win of the season thanks to converting from the free throw line down the stretch. Coach Hunter Stratton earned his first win with the program, but says MAU needs to improve on finishing games out.

“For us, we need to finish games,” Stratton said. “Even today, we finished the game, but not how we wanted to. They came out in the second half, they played hard.”

Foul trouble was the lone blemish for MAU in what was a strong first half. The Patriots were in the bonus by the end of the first quarter, and in the double bonus with 7:04 left in the first half. Seven of Otter Valley’s 17 first-half points came from the free throw line.

Billert was one Patriot who found himself in foul trouble, picking up two fouls three minutes into the game. Caz Amoroso helped fill Billert’s minutes when the Patriot starter was forced to the bench early, scoring nine points and being a presence both on the boards and defensively.

Austin Grogan and Carter Thompson did a great job setting up the Patriots offense throughout the night. Both guards commanded the offense, especially when Otter Valley came with defensive pressure.

Billert is happy with how the team responded on Tuesday.

“We just played really well as a team,” Billert said. “Came together, faced a little adversity in the third quarter, but we fought back and eventually got the win.”

MAU is now 1-4 on the season and travels to face Troy on Saturday.