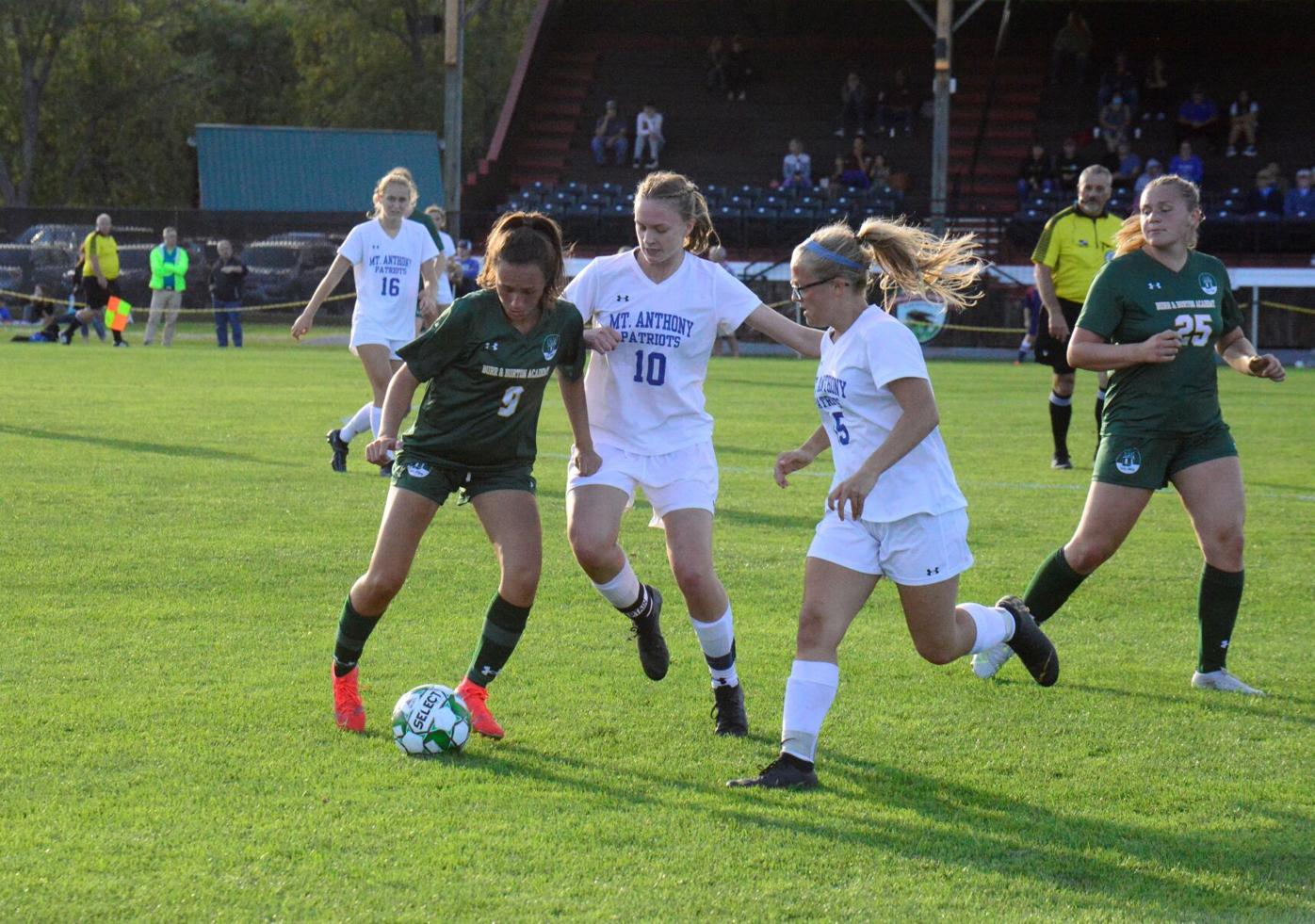 Burr and Burton's Francesca Levitas controls the ball as a pair of Patriot defenders close in on the ball. 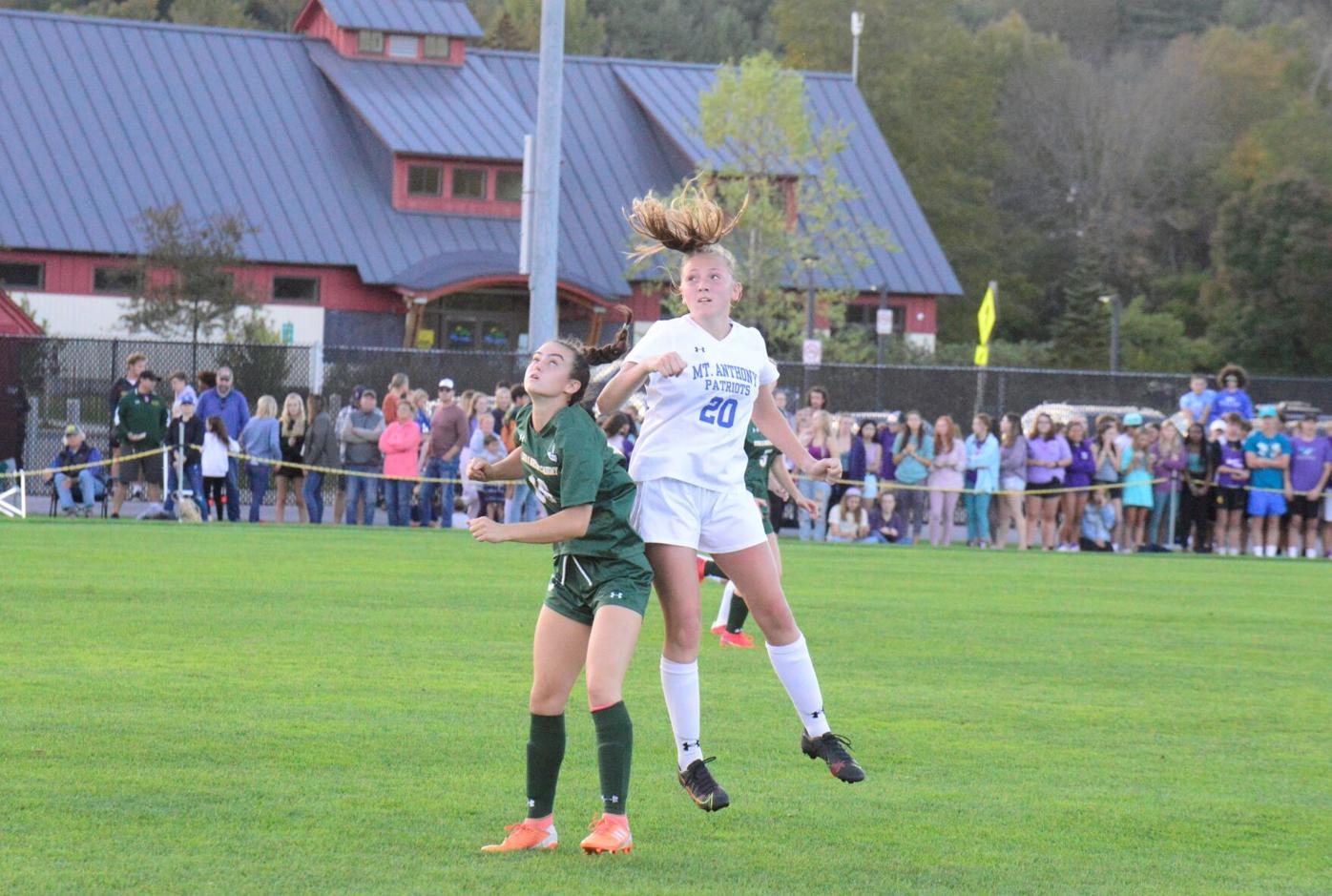 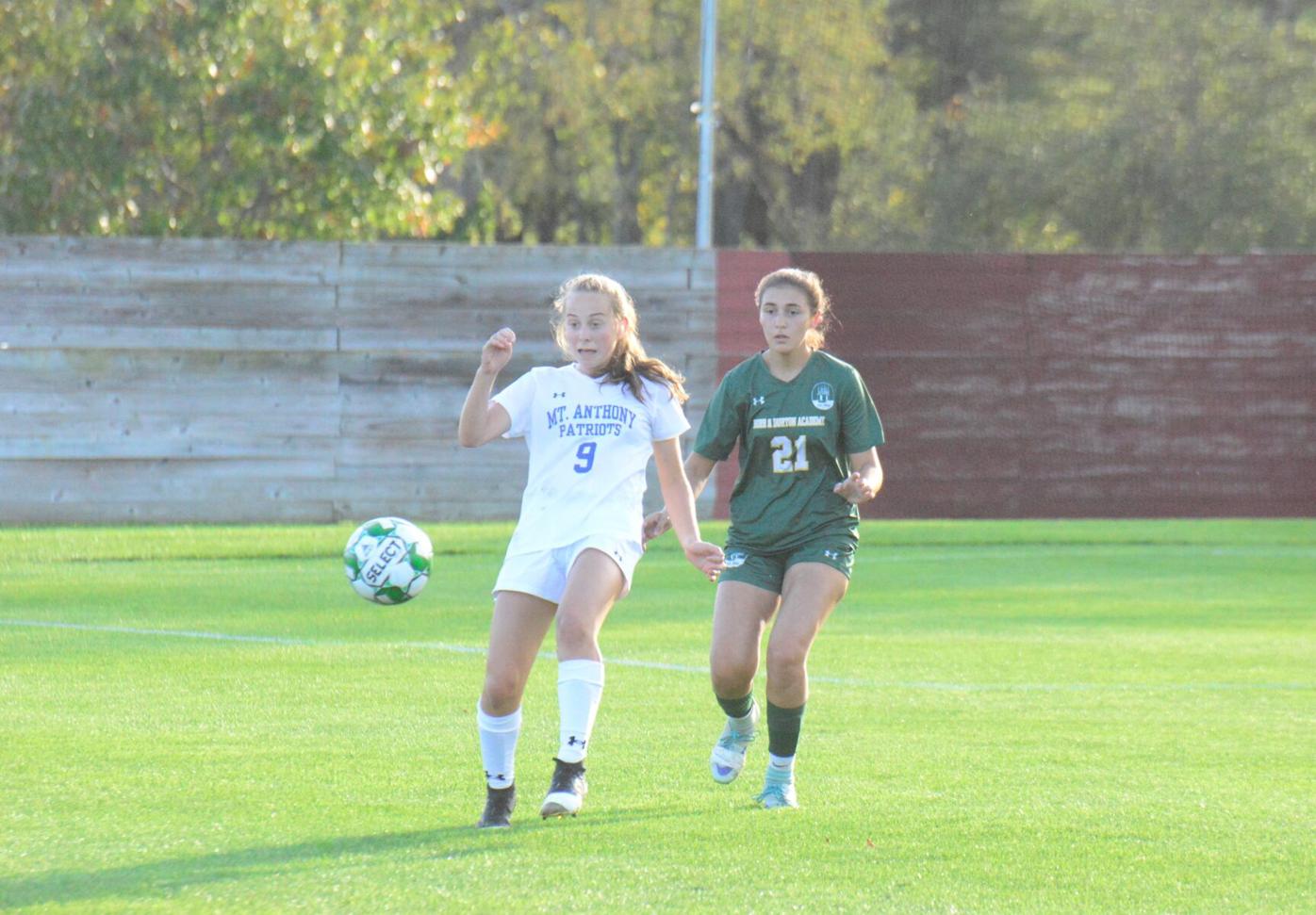 Roey Rella-Neill and Antonia Levitas battle for the ball.

Burr and Burton's Francesca Levitas controls the ball as a pair of Patriot defenders close in on the ball.

Roey Rella-Neill and Antonia Levitas battle for the ball.

MANCHESTER — The last time Burr and Burton and Mount Anthony met on the pitch, the Bulldogs raced out to a 3-0 lead and hung on for a 3-2 win over MAU in the Lady Patriot Classic.

On Friday, flashbacks of the quick BBA start resurfaced when Julia Brand found Rowan Russell in space in the 25th minute and Russell gave the Bulldogs a 1-0 lead.

The Patriots responded, not allowing the defecit to extend beyond one goal all afternoon. BBA and MAU battled for 100 minutes, but not even two overtime periods could decide a winner in the 3-3 draw at Applejack Stadium.

“We played plenty good enough to win tonight, and so did they,” said MAU coach Aaron Wood. “It was a really good soccer game.

Senior captain Meghan Barilone provided the Patriots with the spark they needed in the 13th minute of the first half. Barilone tested BBA keeper Abby Kopeck with a shot a few steps away from the corner flag. Barilone lofted the ball, which deflected off the hands of Kopeck and into the net to even the score at 1-1.

Wood subbed Barilone out of the game 15 minutes prior when she had a one-on-one oppurtunity and was hesitant to test the Bulldog defender in front of her.

Once she reentered the game and her number was called, Barilone made the most of her oppurtunity.

“Meg is the first two year captain I have ever had in about 10-15 years of coaching between soccer and softball,” Wood said. “No matter how hard I am on her she takes it and responds. She is a great leader and we’re lucky to have her.”

The Bulldogs retook the lead with just under seven minutes left in the half thanks to a sliding goal from Emilia de Jounge. The BBA midfielder cleaned up a loose ball near the MAU net with a slide, and the ball bounced just inside the left side of the net.

That gave the Bulldogs a 2-1 lead at the break, a much more managable defecit for MAU this time around.

Patriot keeper Lexi Gerow, who Wood named the player of the game, was instrumental in keeping MAU alive.

The Bulldogs brought the energy from the opening whistle of the second half and tested Gerow early. Just 30 seconds into the half, BBA had a legitamte chance at a goal, but Gerow stepped up and deflected the ball away.

The MAU keeper made 12 total saves in the draw, including a few highlight stops.

About a minute before BBA scored its first goal, a BBA strike looked destined to make its way in the back of the net. Gerow elevated and slapped the ball away to keep the game scoreless.

With MAU still trailing 2-1, BBA’s Daisy O’Keefe tracked down a through ball and had just Gerow to beat as she gained control of the ball just outside the box. Gerow stepped up and dove on the ball, stealing it away from O’Keefe’s foot before the Bulldog midfielder had an oppurtunity to attempt a shot.

That save proved to be massive, as the Patriots evened the score at 2-2 just five minutes later on an Elyse Altland score.

Altland wasn’t done, scoring again in the 17th minute to give MAU its first lead of the game.

Russell would score her second of the night, too, just four minutes later as the teams continued to take turns stealing the momentum. Russell had a beautiful strike that floated into the top left portion of the MAU net.

Each team had a corner in the final two minutes of regulation and were unable to convert, bringing the game to overtime.

The Bulldogs controlled much of the first overtime period. With 7:27 on the clock, Gerow made a lunging save on a potential game-winner.

Kopeck made one of her six saves on the night with a minute left in the overtime period.

With no score, the game enetered a second overtime period. BBA almost had a last-second goal, but Gerow once again made a diving save with just eight seconds left to keep it at 3-3.