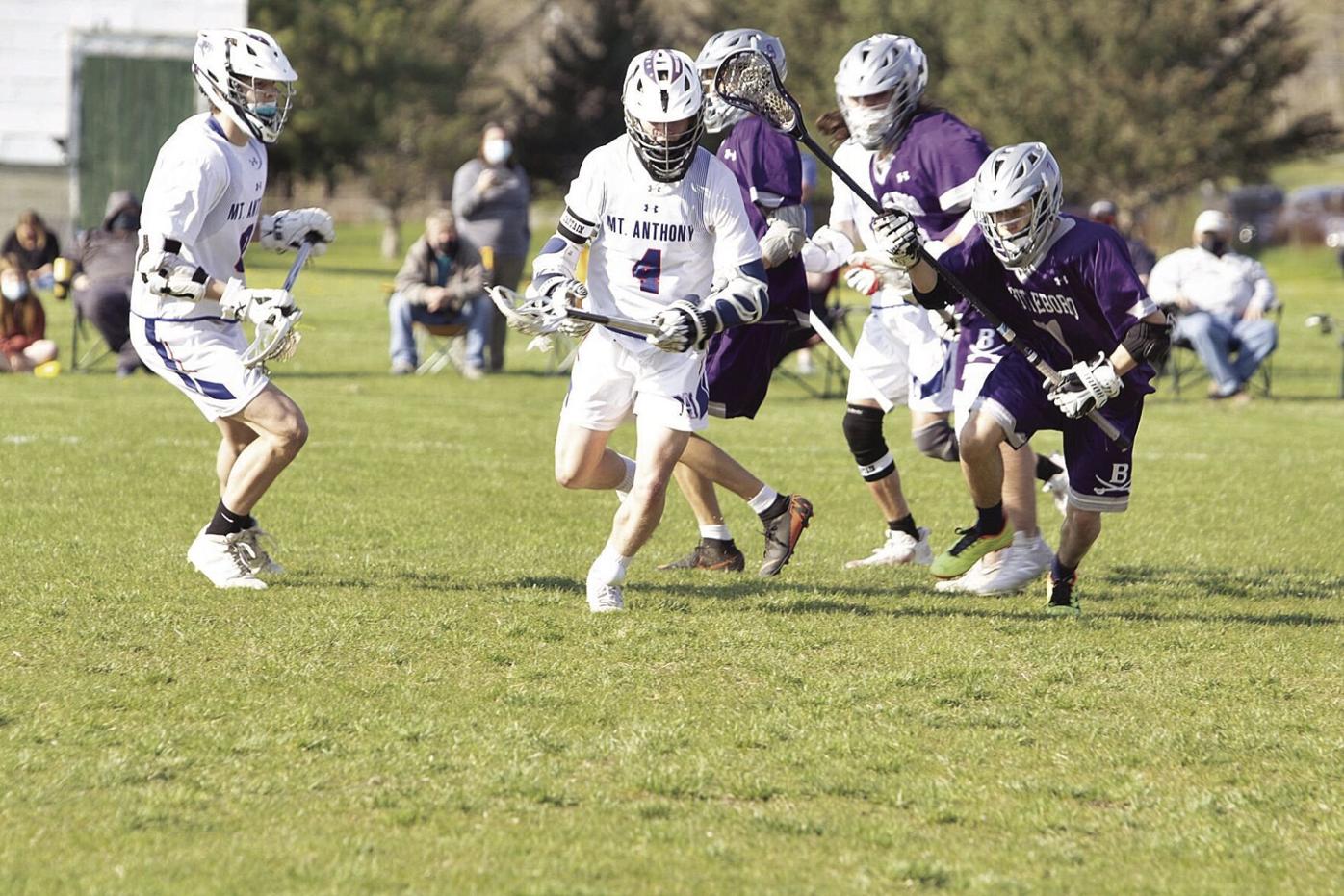 Cam Cummings possesses a ground ball and gets by a couple Brattleboro defenders during Tuesday’s 14-0 MAU win. 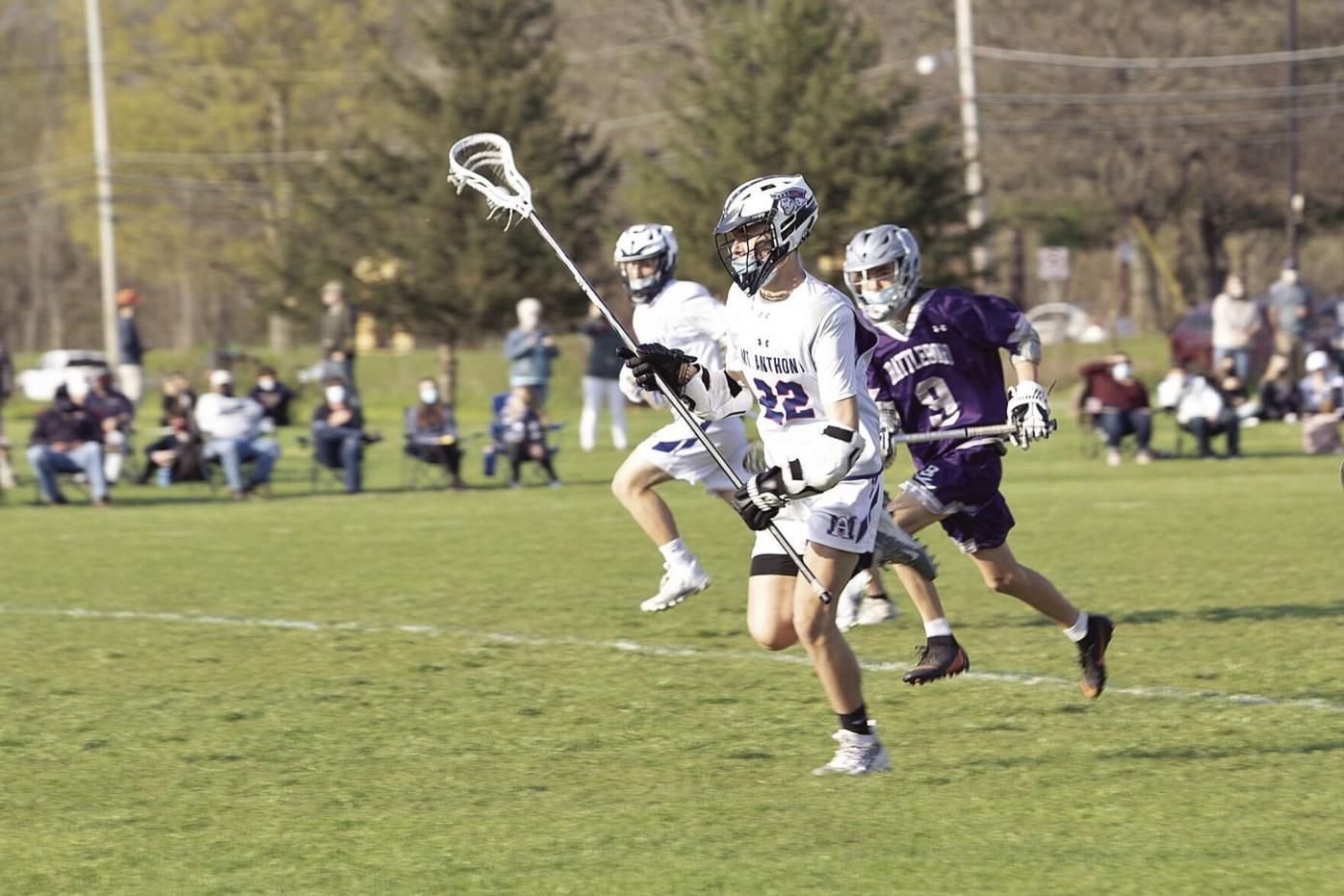 Brady Hudson moves the ball upfield on a fast break.

Cam Cummings possesses a ground ball and gets by a couple Brattleboro defenders during Tuesday’s 14-0 MAU win.

Brady Hudson moves the ball upfield on a fast break.

BENNINGTON — Heading into Tuesday’s contest, the Mount Anthony boys lacrosse team’s offense had been stale in its first two games of the year. After being shutout in the season opener, they were only able to muster three goals in a loss to South Burlington.

Things changed in a big way in MAU’s home opener. The Patriots offense came alive in tune to a 14-0 victory over Brattleboro.

Eight different Patriots registered a goal on the afternoon, led by three scores from Aiden Moscarello.

“We really worked hard yesterday in practice to fix our passing and fix our shooting. It’s something that we haven’t been doing real well the last two games, the little things that they did in practice yesterday that helped today for sure,” Gaudette said.

Gaudette was pleased to see the offense evenly dispersed throughout his lineup.

Tyler DeBoer got the party started for MAU, receiving a pass from John Steadman and firing a shot into the net with 9:09 to play in the opening quarter. Nathan Potter doubled the MAU lead a few minutes later on an unassisted score, one of his two goals of the game.

With less than two minutes left in the first quarter, MAU held a 3-0 advantage after Cam Cummings found the back of the net for his lone goal on the afternoon.

MAU attempted a season-high 38 shots as its offense flowed smoothly and everyone got touches.

Everything seemed to go right for the Patriots on Tuesday. With a 5-0 lead with 7.6 seconds left in the first half, MAU called a timeout hoping to generate a last-second score to end the half.

Out of the break Potter found a lane and slashed through the middle of the field, avoiding defenders on his way to a score with just 1.5 seconds left on the clock. That score gave MAU a 6-0 lead heading into the half.

The Patriots didn’t slow down, either. They scored four goals in both the third and fourth quarters. They fired an impressive 14 shots in the third quarter alone.

The lone weak point for MAU was the amount of time they spent in the penalty box: nine minutes on 10 penalties. Great effort on the defensive side of the field allowed the Patriots to overcome all that time with one less player on the field, as Brattleboro was only penalized three times for a total of two minutes.

Brattleboro only attempted 13 shots all game. The MAU defense was especially stingy in the second half, only allowing four shots from the visitors.

“Defense I thought played lights out,” Gaudette said. “We were able to kill all of our man downs. Defense really worked good together.”

Though he wasn’t challenged often, Hayden Gaudette was solid protecting the net for the Patriots. He racked up seven total saves and showed his quick instincts in the few instances he was challenged.

Moscarello’s final score with exactly eight minutes left in the fourth quarter brought the game to 12-0, which signaled running time for the remainder of the game. MAU would tally on two late goals from Austin Belville (1:37) and Chase Gauthier (:10) to bring the final score to 14-0.

Gaudette was able to sub liberally late, and every MAU player that dressed saw the field on Tuesday. That included the first varsity goalie minutes for freshman Landon Brimmer who protected the net for the final six minutes of action.

The Patriots will look to carry the momentum from Tuesday’s shutout victory into their next contest on May 6 against Woodstock, who beat the Patriots 13-0 in the season opener on April 21.