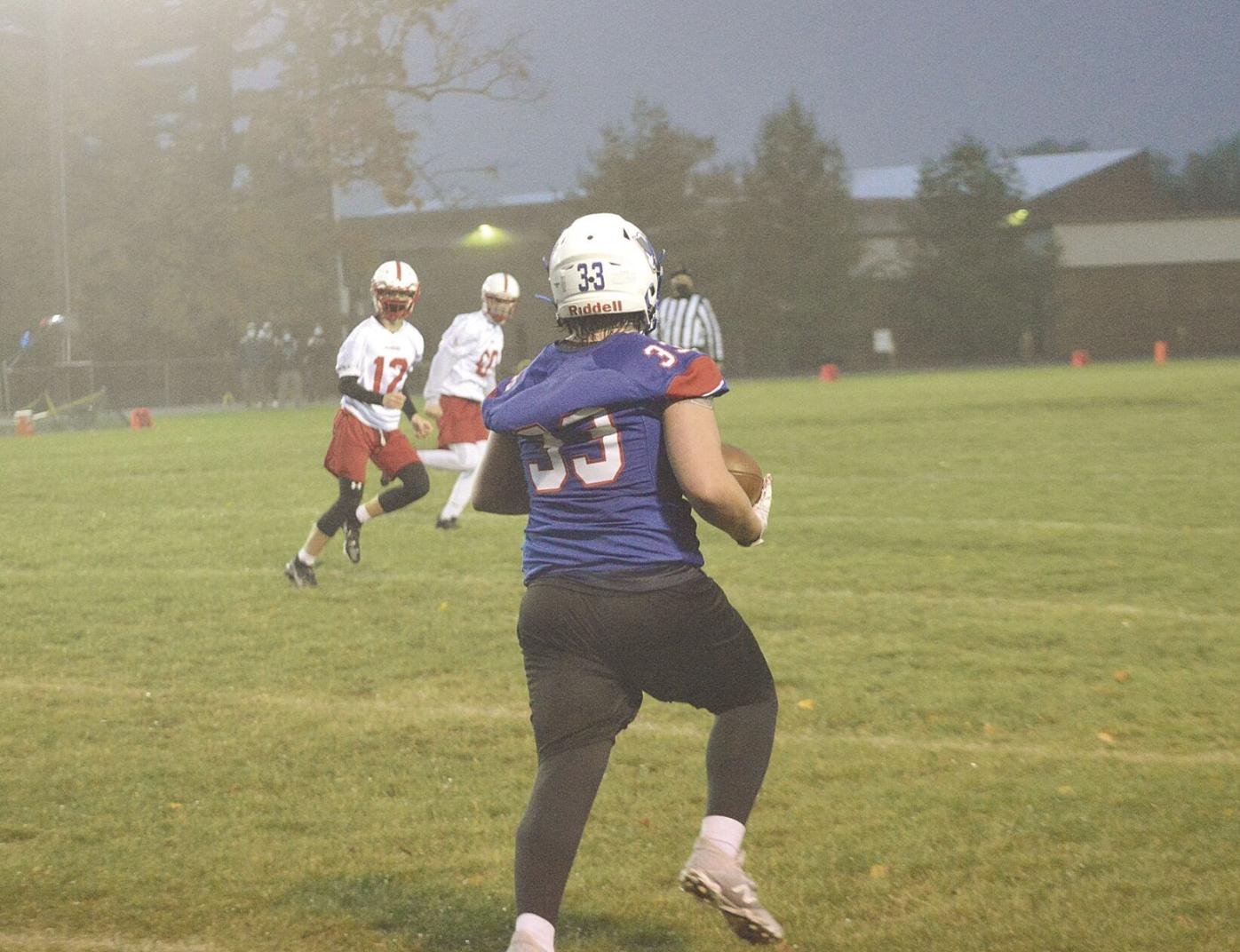 Hayden Gaudette looks for a running lane after his interception on Tuesday against Rutland. 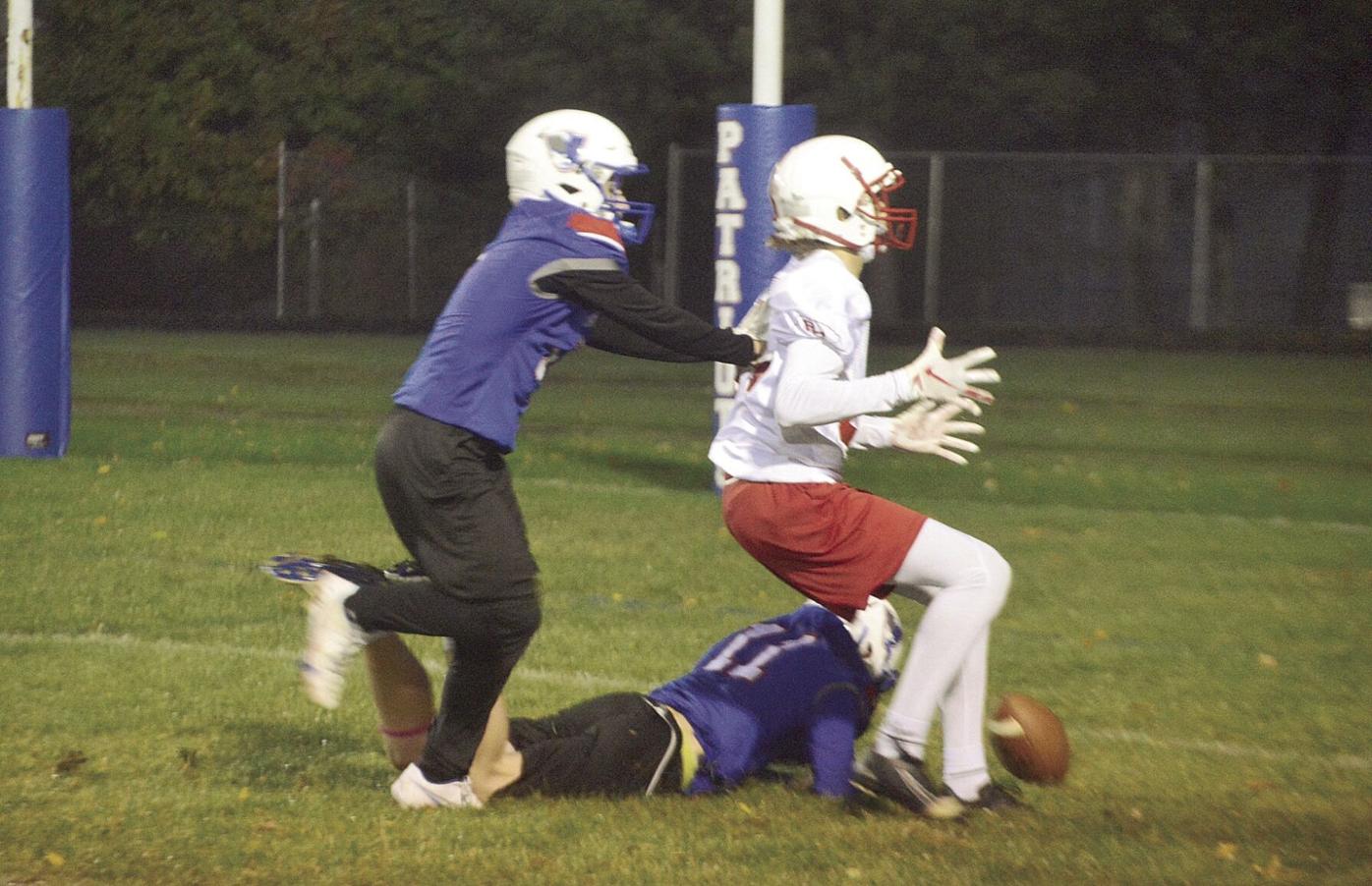 Multiple Patriot defenders force an incompletion with their tight coverage on a Rutland receiver.

Hayden Gaudette looks for a running lane after his interception on Tuesday against Rutland.

Multiple Patriot defenders force an incompletion with their tight coverage on a Rutland receiver.

BENNINGTON — Mount Anthony came away with the win on senior night, downing Rutland 21-10 on Tuesday night at Spinelli Field.

The Patriots were able to exact revenge on Rutland, who beat MAU on Oct. 2 in its only loss of the year, thanks to a solid defensive effort. MAU secured a season-high four interceptions.

Austin Grogan made a huge play for MAU in the second, getting his hands on a Rutland pass attempt at the goal line. Grogan hit the jets once he secured the ball, making it 75 yards to the 25 yard line before being touched. It turned out to be a 14 point swing, as senior Brody Bossong would punch in a 11-yard touchdown catch just a few plays later, giving MAU a 21-3 heading into the half.

The Patriots would get another pick as Rutland looked poised to put points on the board, this time courtesy of Ayman Naser who made a play in the back of the end zone. Naser and a Rutland receiver both went up for the ball, but it was Naser who ultimately came down with it, ending another Rutland possession without a score.

Hayden Gaudette had MAU's first interception. After a MAU defensive back and Rutland receiver both fell on the slippery field, Gaudette came over and made the play in the first quarter. Gaudette showed off his speed as a "big skills" player, returning the interception 60 yards and into Rutland territory.

Senior Gavin Johnson led the way with six receptions for 65 yards and one touchdown.

Getting a win on senior night is something Johnson will not soon forget.

"It was good to have that feeling with the last home game with the boys," Johnson said. "It was truly magical."

This year's group of seniors were freshmen when Gordon took over the MAU football program in 2017. The coach praised the way they bought into his program and have been instrumental in building a winning culture in Bennington.

"Every one of them just does what you want a football player to do, and it's not just talent, it's the work ethic," said Gordon. "I'm going to miss them next year. It's just love for those guys."

Gaudette had three catches for 42 yards and a score for MAU.

Sophomore Braeden Billert was the Patriot's quarterback in the first quarter, completing 4-for-8 passes for for 75 yards and a touchdown. His longest pass went to Connor Barrett, who hauled in a 53-yard pass and was touched just two yards shy of the goal line.

Fellow sophomore Gavin Schnoop led the offense in the third, completing 4-for-9 for 52 yards through the air.

Ending a football career playing a non-traditional format of the game has been challenging for seniors across the state. Gordon is happy with the way his team has responded to the adversity they have faced in 2020.

"This isn't the season they wanted, it's the season we've had," Gordon said. "From day one, they've bought in."

The 4-1 Patriots travel to Poultney on Saturday for a 1 p.m. game as they look to continue their winning ways.