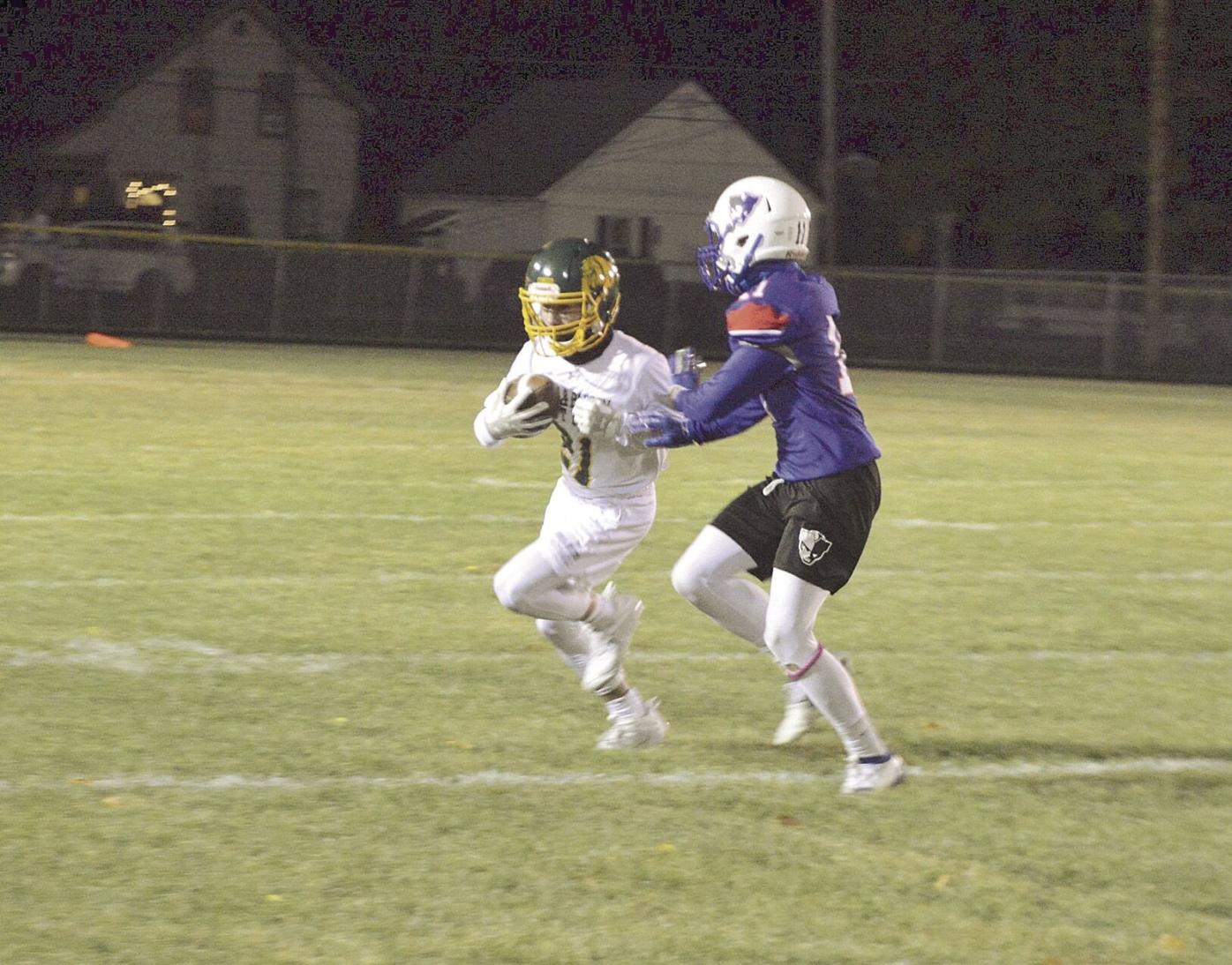 A Mount Anthony defender makes a tackle in the open field during Thursday night’s game versus Burr and Burton. 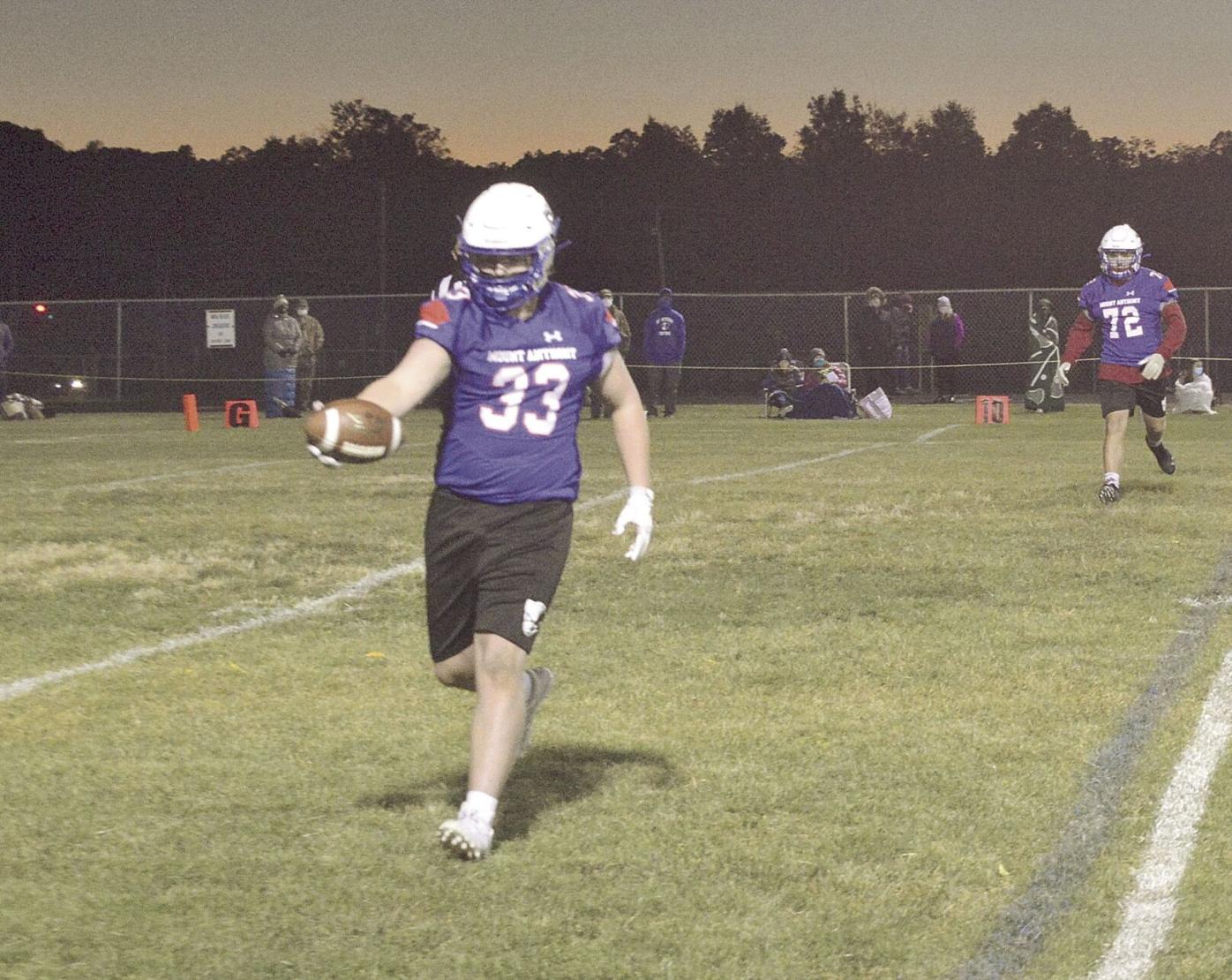 Mount Anthony’s Hayden Gaudette snags a punt. Gaudette caught a 65-yard touchdown and also had an interception in the win.

A Mount Anthony defender makes a tackle in the open field during Thursday night’s game versus Burr and Burton.

Mount Anthony’s Hayden Gaudette snags a punt. Gaudette caught a 65-yard touchdown and also had an interception in the win.

BENNINGTON — Burr and Burton football has been electric the past few seasons. They won the Division II state championship in 2018, and followed that up as the first team in the state of Vermont to move up to Division I and repeat as champions.

The Bulldogs were 3-0 heading into Thursday night’s matchup with Mount Anthony, averaging 42 points per game in the new 7-on-7 format. That offense was nothing new to the Bulldogs and coach Tom McCoy, who averaged more than 50 points a game during their title run last season.

Mount Anthony’s defense came up big in Thursday night’s 21-14 victory. A pair of interceptions, first by Braeden Billert in the second quarter with BBA driving. Billert picked off a BBA pass in the end zone, shifting the momentum in favor of the Patriots.

Hayden Gaudette, a “big skills” player for MAU, got his hands on the other interception. Gaudette had a decent return on his third quarter interception, giving his offense a good starting field position.

The Patriots offense wasn’t perfect, either. They also threw two interceptions. Their defense, however, kept them in the game and was a big reason they came out victorious over one of the best teams in the state.

A four-yard Jack Ware touchdown reception from Caleb Hay with 4:10 remaining in the game turned out to be the difference maker. That broke a 14-14 tie. MAU’s defense held tough on the following series, forcing a turnover on downs before running out the clock and sealing the Patriot win.

Ware had a strong night, finishing with five catches for 53 yards and two touchdowns.

Gaudette was responsible for the other MAU score, a 65 yarder in which Gaudette showed good speed creating separation from BBA defenders.

The junior had four catches for 88 yards and the score. He had a big impact on both sides of the ball.

Gavin Schnoop only attempted four passes, but he made the most of them. Schnoop had three completions, including the 65 yard touchdown to Gaudette, for a total of 79 yards. Schnoop’s lone misfire was an interception.

Billert went 7 for 13 for 77 yards and one interception.

Gavin Johnson also had a strong performance for the Patriots, hauling in four balls for a total of 80 yards.

MAU’s tough tests are far from over. It’s not too often a football team, at any level, has back-to-back games at any point. With the abnormal schedule this year however, that is exactly what MAU is dealing with.

After the huge victory on Thursday night, they played host to Mill River on Friday.

The BBA-MAU game was originally scheduled for Wednesday, but Wednesday’s storm forced the game to be postponed a day.

Online: Check out BenningtonBanner.com for the results from Friday night’s MAU football game.