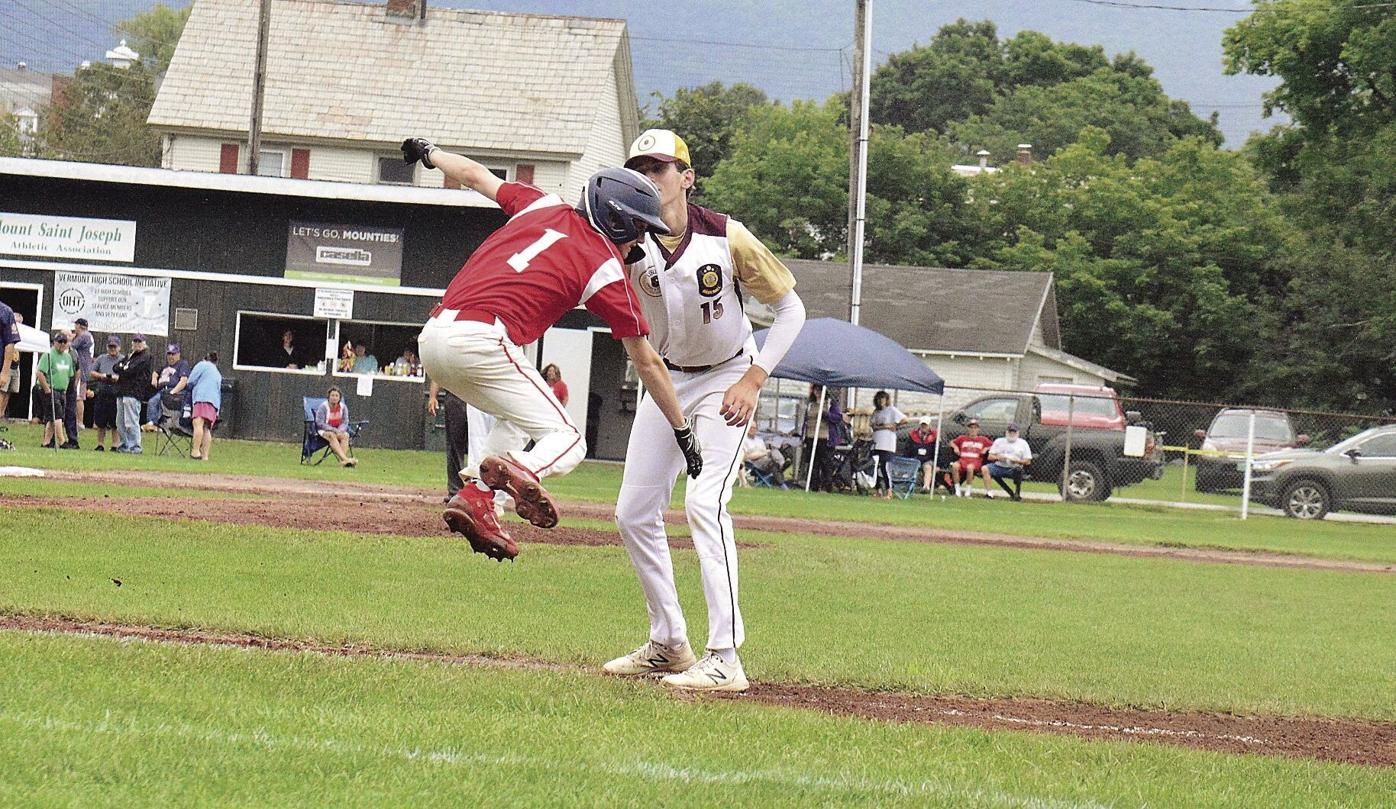 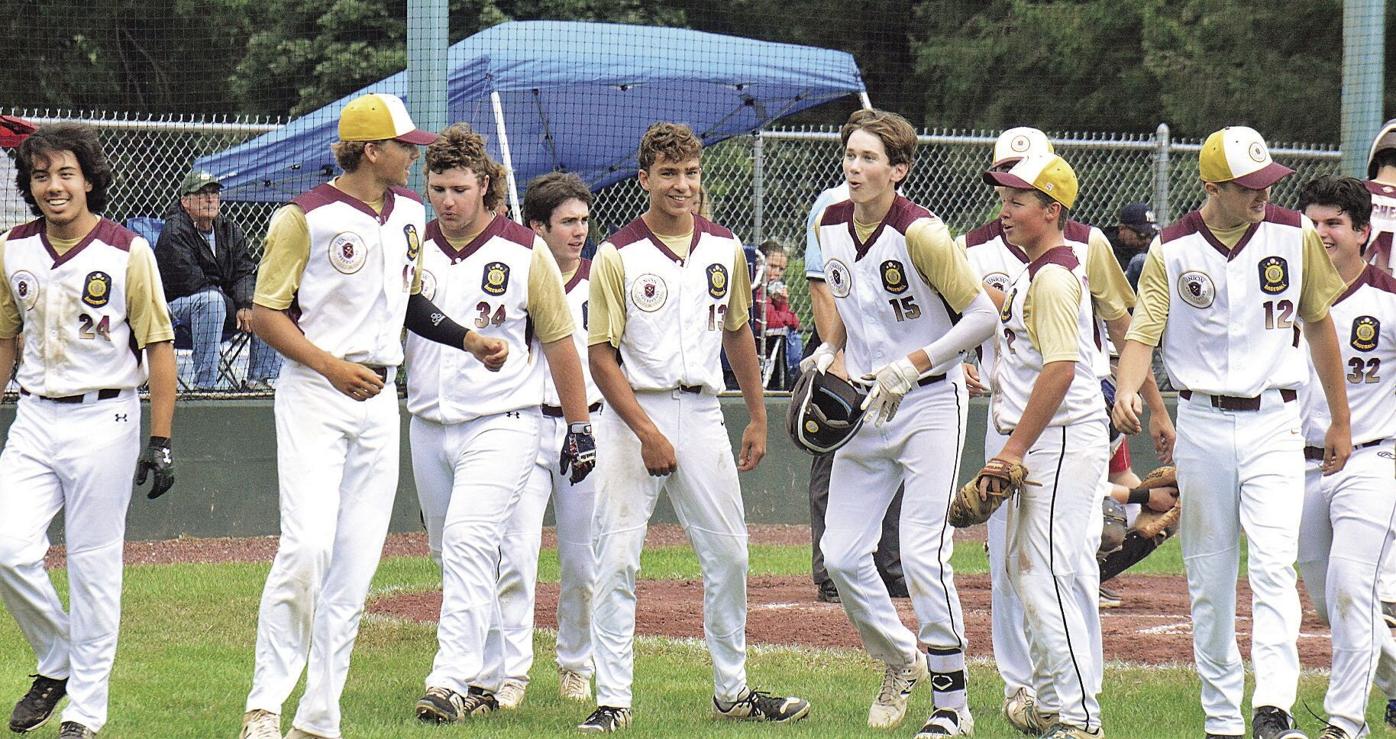 Manchester Union Underground celebrates as Trevor Greene rounds the bases after his fourth-inning grand slam on Friday morning against Rutland.

Manchester Union Underground celebrates as Trevor Greene rounds the bases after his fourth-inning grand slam on Friday morning against Rutland.

They made it a little earlier than expected as rain forced its first game in the loser’s bracket, originally scheduled for Thursday afternoon in Manchester, to be moved to Rutland for some Friday morning baseball.

Manchester came out victorious in the elimination game, 13-3, over Rutland Post 31 in six innings — but Mother Nature still had her say.

Coleman Reece was ready to dig in from his normal leadoff spot for Manchester, but a sudden downpour forced the tarp on the field before Rutland’s Griff Briggs could deliver his first pitch. Both teams had to deal with an 1-hour, 40-minute rain delay as the grounds crew did all it could to remove puddles throughout the infield.

When play resumed, Brownlee looked unfazed from the break on the mound.

“The big thing coming out of the rain delay was Max,” said Manchester manager Eddie Lewicki. “He stepped up and was pitching really well for awhile.”

Brownlee had consecutive 1-2-3 innings in the second and third, and Sam Steinman hit a solo bomb well over the right field fence to lead-off the bottom of the second to give his team a lead they would not relinquish.

Manchester’s bats really came alive in the fourth. The first three batters reached safely, setting up a bases loaded situation for Trevor Greene. The Manchester first baseman took advantage of the opportunity, carrying a ball over the left field fence for a grand slam and breaking the game open.

“Trevor can do that stuff all the time; in practice he hits the ball like that,” Lewicki said. “That ball was crushed to left field.”

Greene said he had a simple approach at the plate.

“I kind of came up trying to get a base hit off my good friend Griff,” Greene said. “We’ve been playing since we were young. He’s been getting the best of me this season, so I finally decided to get one back at him.”

Greene found himself in an unique position, stepping up to the plate three separate times with the bases loaded. In the fifth, he showed his patience at the plate and drew a walk. He struck out in his third at bat with runners on every base.

Post 31’s No. 9 hitter, Cam Rider, got his team on the board with a two-run shot to right center in the top of the fifth off Jack McCoy, who pitched the fifth and sixth innings, making it a 5-2 ballgame. Rutland would tack on one additional run as Jordan Beayon doubled in Briggs to make it a two-run ballgame, but that’s as close as Rutland would get.

Manchester responded with a three-run bottom half of the inning to regain its five-run advantage.

Lewicki called his team’s response “huge” as it allowed Manchester to not have to turn to a third arm.

“This tournament stuff’s hard. You have to kind of play the pitch count,” Lewicki said. “It’s a huge thing comfort-wise, and then I didn’t have to throw anyone else and burn other pitchers.”

With the win, Manchester plays the loser of the South Burlington-Brattleboro contest at 4 p.m. in Rutland on Friday. The game had not been completed by press time.

Manchester finished the game in the sixth with a five-run inning, as the rain once again began coming down at a steady pace.

Ahead 11-3, Coleman Reece hit a ground ball up the middle that ate up Rutland’s shortstop, scoring two and ending the game on the 10-run rule.

“We’re in as good of a spot as we could be with one loss,” Lewicki said. “I’m happy with how we played and took care of business and we’ll get a little break (now) and then see what happens.”