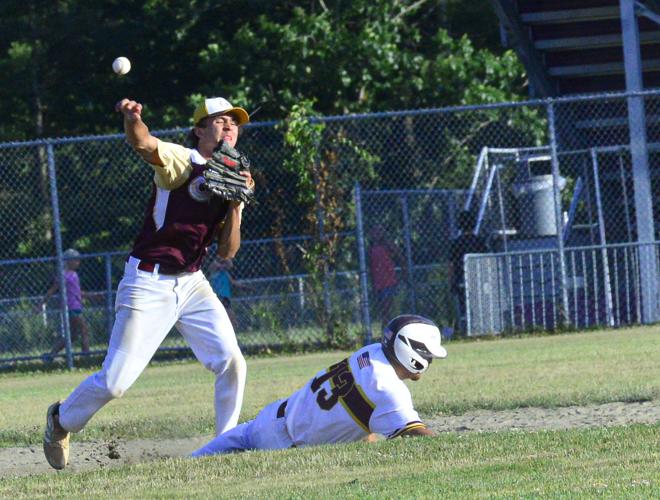 A Manchester infielder makes a throw to first base. 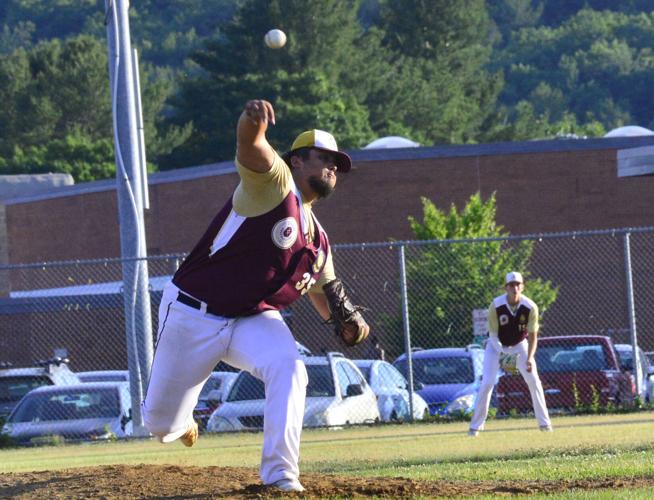 A Manchester pitcher fires a pitch during a game against Brattleboro Post 5 on Thursday. 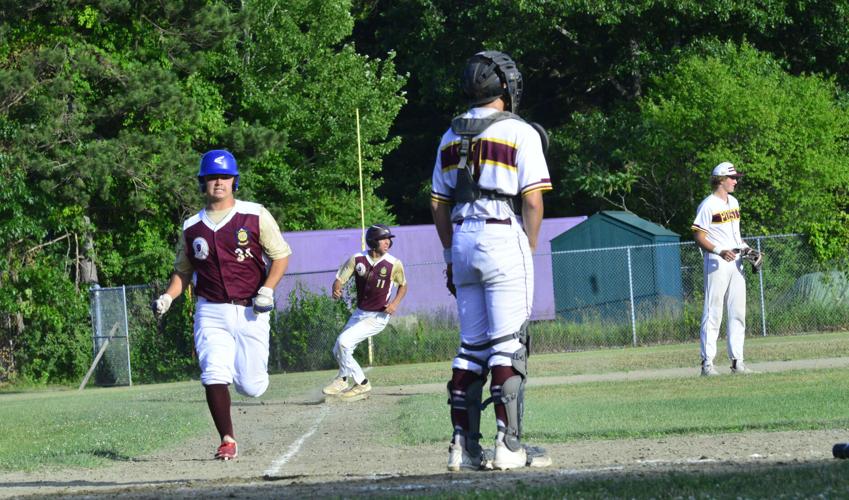 A Manchester runner makes his way down the third base line.

A Manchester infielder makes a throw to first base.

A Manchester pitcher fires a pitch during a game against Brattleboro Post 5 on Thursday.

A Manchester runner makes his way down the third base line.

MANCHESTER — It took two hours and 29 minutes for Manchester Union Underground and Brattleboro Post 5 to determine a winner on Sunday. Despite the fact that the two teams combined for 31 runs, 22 hits, 13 errors, five hit batsmen and and at least a half dozen wild pitches, it was a clutch defensive play and a gutty pitching performance that ultimately carried Manchester to the 16-15 victory.

Trevor Greene entered a fourth inning in which Manchester had already given up nine runs, with one out and runners on second and third. He put out the fire, striking out the next two hitters to finally escape the nightmare, and it was all Manchester from there, as they would rally with a nine-run inning of their own in the bottom of the fifth to take the 16-15 lead that would prove to be enough.

Greene (2-4, two doubles and three RBIs at the plate) rolled in his 3.2 innings pitched to get the win, striking out seven while scattering four walks and allowing just one hit. He also hit Brattleboro’s Willem Thurber with a pitch after getting him behind 0-2, putting him aboard to lead off the seventh. However, a heads-up play by Griff Briggs would erase that mistake.

Needing just one run to tie, Post 5’s Eli Allbee squared up a bunt to advance Thurber to second. Instead, Briggs charged in from third and fielded the ball so quickly he decided to cut down the lead runner. Briggs, his right arm apparently no worse for the wear after throwing 80 pitches to start the game, sent a dart to Will Addington at second base, who turned and fired to first to retire Allbee for an unconventional 5-4-3 double-play.

“It was perfect,” Union Underground coach Eddie Lewicki said postgame. “I would normally not want Griff to come in like that. But I think everyone in the whole park knew they were bunting. He’s got a good arm. To turn that double play right there, two very big outs.”

Greene recorded a strikeout to seal the deal two batters later. It capped a performance on the mound that exhibited the mental toughness to slam the door when his team needed it, but also some physical toughness, as well.

“The big thing for us was getting Trevor in the game,” Lewicki said. “He was a little sore because he took a hit by pitch yesterday pretty bad in his shoulder. So for him to come in and throw strikes, (and us) play solid defense behind him, that’s going to result in a win.”

Briggs actually pitched fairly well as Manchester’s starter. The Union Underground was sloppy in the field behind him, though, with four errors in the first two innings making him labor early in the game, and Brattleboro chased him in the fourth with his pitch count climbing.

The trouble was just beginning as Lewicki turned to Daniel Scarlotta, who was unable to record an out and gave up three earned runs. Torlieff Majorell didn’t fare much better, but was able to record a ground out before Greene came on to end Post 5’s hit parade for good.

Fortunately for Manchester, Brattleboro was not sharp in the field to start the game, either. Their five errors through the first three innings helped keep Manchester’s offense going, and they actually had a 7-6 lead after three.

Will Addington was locked in at the plate all day. He went 3-5 with three singles, driving in two of his three runs on the day with a big single during the fifth-inning comeback.

Center fielder Sam Steinman probably would have done more damage, as well, if Post 5 had given him the opportunity. He came to the plate in both the second and third with runners in scoring position, but first base open. They gave him a free pass rather than pitch to him both times.

“That dates back to last year.” Lewicki explained. “Their coach knows, he talks about Sam, he’s probably one of the best hitters in the entire league… I would have walked him, too. It’s just baseball, and the right thing to do there.”

However, Steinman got his chances in Union Underground’s massive fifth. He followed up Greene’s two-RBI double that started the scoring with an RBI double of his own to deep left-center.

Then, in his second at-bat of the inning, the bases were loaded and Brattleboro’s lead was now 15-14. Brattleboro had little choice but to pitch to him in the high-pressure spot, and Steinman came through, punching a single back up the middle that would score Aiden Buggee and Max Brownlee for what would be the tying and go-ahead runs.

“I’m super proud of them. We had a conversation when we were down eight runs,” Lewicki said. “All I asked was just don’t quit, don’t give up… and they never did.”

The win brings Manchester to 7-1 and first place in Vermont American Legion Baseball’s South Division. Their next game is at home against Bellows Falls Post 37, this Tuesday at 5:30. Brattleboro Post 5 falls to 5-3 on the year.