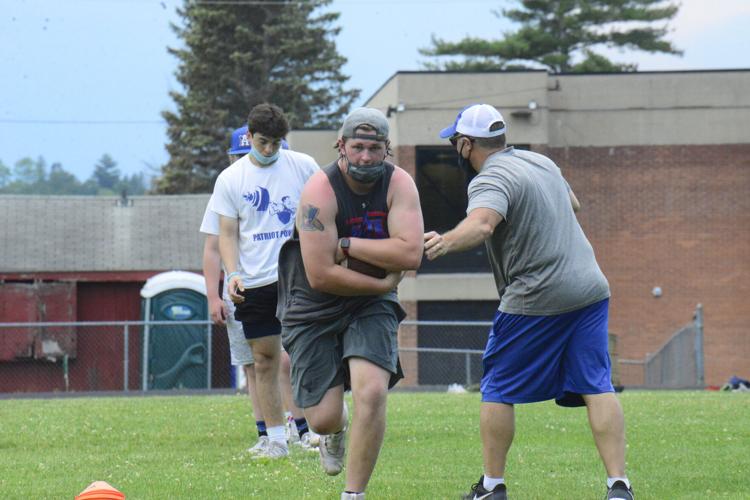 Mount Anthony’s Hayden Gaudette has been named the 2020-2021 Bennington Banner and Manchester Journal Regional male athlete of the year. 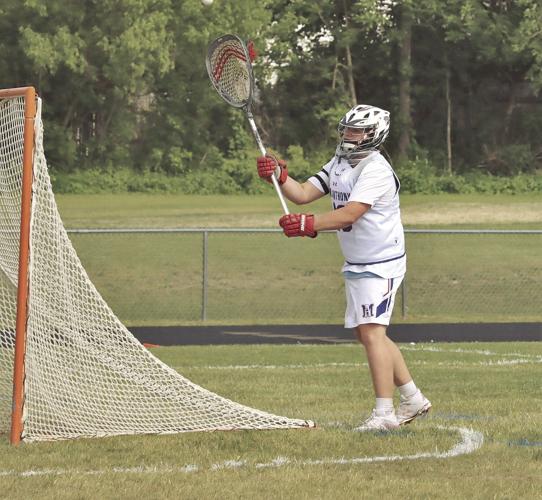 Mount Anthony Hayden Gaudette protecting the net during the 2021 season.

Mount Anthony’s Hayden Gaudette has been named the 2020-2021 Bennington Banner and Manchester Journal Regional male athlete of the year.

Mount Anthony Hayden Gaudette protecting the net during the 2021 season.

Hayden Gaudette can do it all. He proved as much last fall, transitioning from his typical bruiser role as a fullback for the Mount Anthony football team into a lethal pass-catching option in the 7-on-7 format. Gaudette led the Patriots with 40 receptions for more than 600 yards and nine scores.

At 6-foot-1 and 230 pounds, it’s difficult to overstate how impressive that transition truly was. Gaudette has been using his size to his advantage for years, and suddenly was put in a position where contact wasn’t allowed on the football field. The rising senior didn’t let that impact his performance, as he rose to the occasion and led MAU football to its most successful season in decades.

His impressive football season was a telling sign of the year Gaudette would have. A staple on the MAU lacrosse team too, Gaudette shined whenever he stepped onto the field.

For his achievements during the 2020-2021 athletic seasons, Gaudette has been named as the Bennington Banner and Manchester Journal male athlete of the year.

In the spring, Gaudette played goalie for the lacrosse team, and protected the net arguably better than anyone across the state.

He nearly made 200 saves in the Patriots 13-game season, finishing 6-7 and a loss in the opening round of the Division II playoffs.

Gaudette showed quick instincts protecting the net for the Patriots. He found himself peppered early and often throughout the year, but was the key piece for MAU on the field. He kept the Patriots in games they had no business being within striking distance with his lockdown play.

Even in losses, Gaudette shined. That was apparent in a loss to South Burlington early in the season, where Gaudette racked up an impressive 20 saves on the afternoon.

He started the year off by allowing 13 goals but making 12 saves in a loss to Woodstock.

He earned one shutout throughout the year, making seven saves in MAU’s first victory of the season against Brattleboro. That was by far the least Gaudette was challenged all season long, but any time you keep an opponent off the scoreboard is impressive. MAU won 14-0, improving its record to 1-2 at that point in the season.

Gaudette seemed to enjoy playing Rutland. He had 16 saves in the first matchup, which went MAU’s way 6-3. Later in the season, he recorded 19 saves as the Patriots squeaked out a 7-6 win for their first sweep in several years.

He was also impressive in a close loss to Hartford, making 16 saves and only allowing six scores in a 6-2 loss.

Gaudette had a knack of keeping the opposition under double digit scores in games where it seemed like they could have put 20-plus goals on the board.

Other standout performances include MAU’s 9-2 win over Startton and a 7-6 win over Brattleboro.

In what would be MAU’s last game of the season in a playoff loss to Hartford, Gaudette left everything he had out on the field making 17 saves in the 7-2 defeat.

His athletic year had the potential to be that much more impressive, too. Entering his junior year, Gaudette was already a two-time state champion in wrestling. There’s little doubt that he would have been in a great position to three-peat in the winter had a wrestling season been permitted in Vermont. Unfortunately, the season never got off the ground as COVID-19 concerns canceled the season before it could start.

Gaudette enters his senior season with MAU with an impressive resume. Don’t be surprised if you keep seeing his name pop up.

It was a year full of touchdowns, tackles, pins and saves for the 2022 Vermont News & Media male athlete of the year. He excelled on the g…