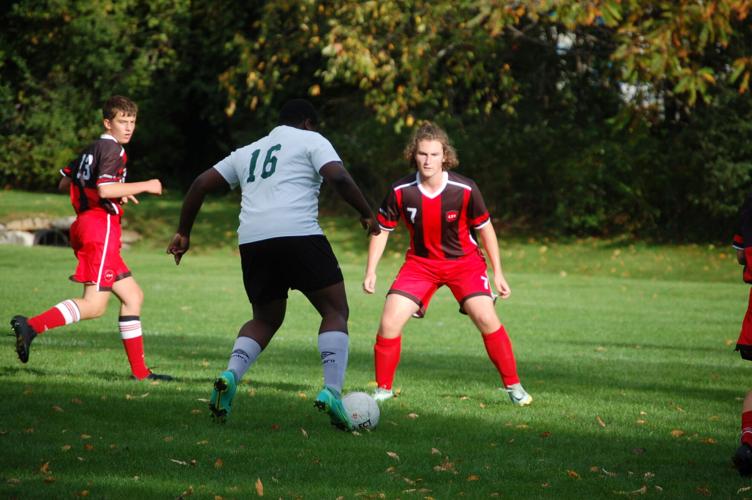 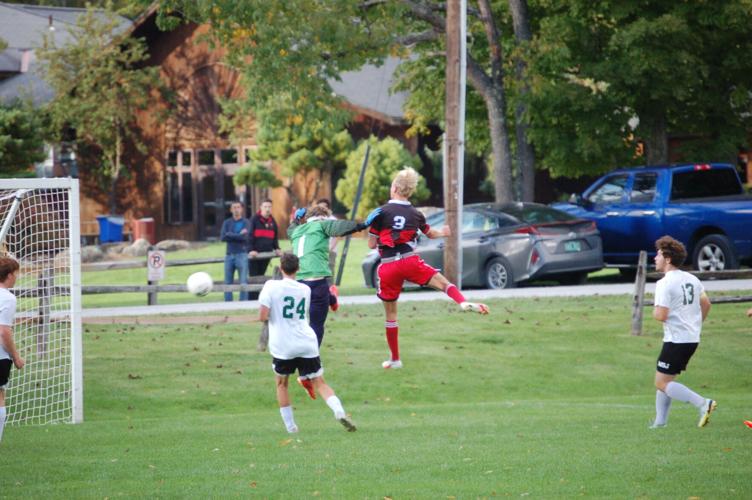 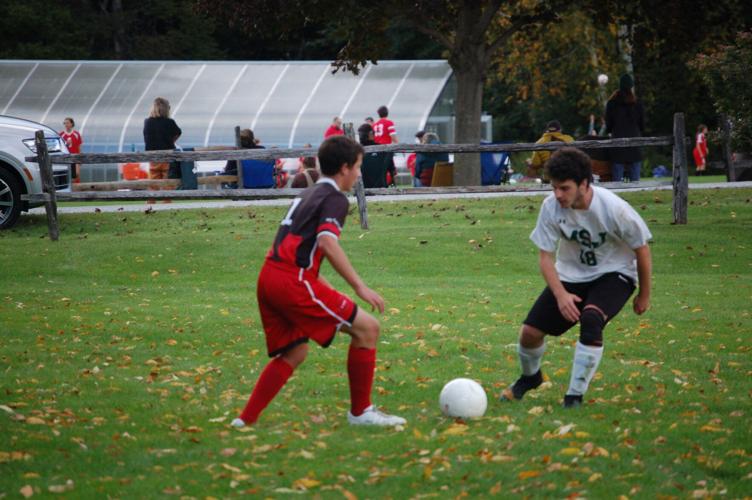 Long Trail's Gabriel Thompson tries to dribble past a defender during Tuesday's game against MSJ. Thompson scored his first varsity goal in the game. 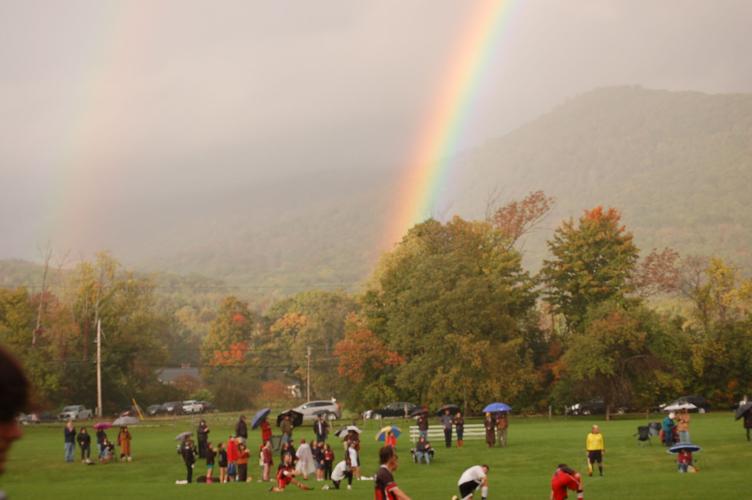 The Long Trail faithful were treated to a vivid rainbow after weathering the heavy downpour in the second half of Tuesday's game with MSJ.

Long Trail's Gabriel Thompson tries to dribble past a defender during Tuesday's game against MSJ. Thompson scored his first varsity goal in the game.

The Long Trail faithful were treated to a vivid rainbow after weathering the heavy downpour in the second half of Tuesday's game with MSJ.

DORSET — With just over 15 minutes remaining in Long Trail School’s game with Mount Saint Joseph Academy, the skies opened up over Dorset, and so did the Long Trail offense. With three goals in a span of 18 minutes in the second half, the Mountain Lions stormed back from a 2-0 halftime deficit to beat the Mounties.

“So much of it is just belief, and the mentality to know that you can rebound from mistakes,” said coach Colin Igoe after the game. “The guys worked hard… it’s fun when it goes right. I’m really proud of the effort.”

While the cold rain couldn’t cool off the Long Trail attack in the second half, the comeback wouldn’t have been possible without a stellar game from goalkeeper Ty Dickerson, who made several crucial saves down the stretch,

“He was awesome. He’s a rock,” said Igoe. “Senior captain and not only a great player but wonderful human, wonderful kid… works hard, and really picks guys up and is positive.”

Long Trail needed some of that positive energy and leadership after a frustrating first half. They had consistent pressure and several strong scoring chances in the first 20 minutes, but struggled to put the ball on net.

Senior Luca Goff had a particularly nice opportunity after a free kick from Robert Smith right in front of the net, Goff leaping to redirect the ball with a header. The Mountain Lions were called for handball in the ensuing scramble and the threat was over.

Then a defensive lapse allowed MSJ to strike first. MSJ’s Narven Paul used some fancy footwork and found Owen Hackett streaking all alone down the left wing. Hackett beat Dickerson and tucked it into the lower left corner for a 1-0 lead.

Long Trail had several more opportunities the rest of the half, but couldn’t finish. Paul, on the other hand, would take advantage of the space the Mountain Lion defense gave him near the top of the goal box and beat Dickerson to the upper right corner to make it 2-0 with just 3:33 to play in the half.

The Mountain Lions came out with their hair on fire in the second half, though, creating scoring opportunities from the opening whistle. Not even three minutes into the half, Kai Lamothe found Adam Kulas Klopchin on a beautiful feed on the right side, but the Mountie keeper was positioned perfectly for the stop.

Several minutes later, Gabriel Thompson threatened with a good cross off his left foot that was just out of the reach of Kulas Klopchin. Thompson would redeem himself in the 57th minute, though. The freshman scored his first varsity goal with a rocket from about 25 yards out.

The Mounties nearly answered with another Paul-Hackett connection, but nothing was getting by Dickerson in this second half. He made a fingertip save on Hackett’s shot bound for the top left corner, keeping the game in reach.

“He stepped up when we needed him most, and you feed off that,” said Igoe. “Lot of trust with him back there between the pipes.”

With a bit of a shot in the arm from Dickerson’s save, the Mountain Lions’ offense hit its stride just as heavy showers began. Goff, who didn’t get his name on the score sheet but was an offensive catalyst the entire game, rocked a ball off the crossbar that found its way to the foot of LaMothe, who buried the game-tying goal with 15:48 to play.

The Mountain Lions would stave off one last burst from the Mounties, with Dickerson getting vertical for one more incredible save, as well as some notable hustle from sophomore Eli Roth, who sprinted back towards his own goal to prevent another Paul goal after he had gotten behind the entire defense.

Then, with just 5:14 to play, the Mounties finally caved to an offensive onslaught from the Mountain Lions, Kulas Klopchin netting what would prove to be the game-winner.