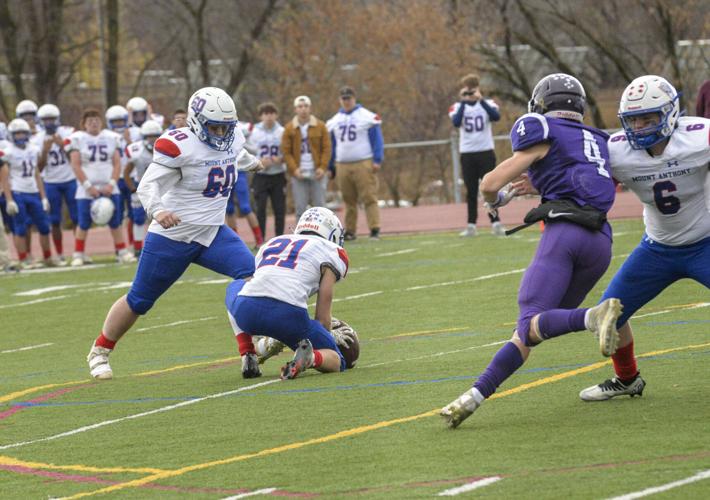 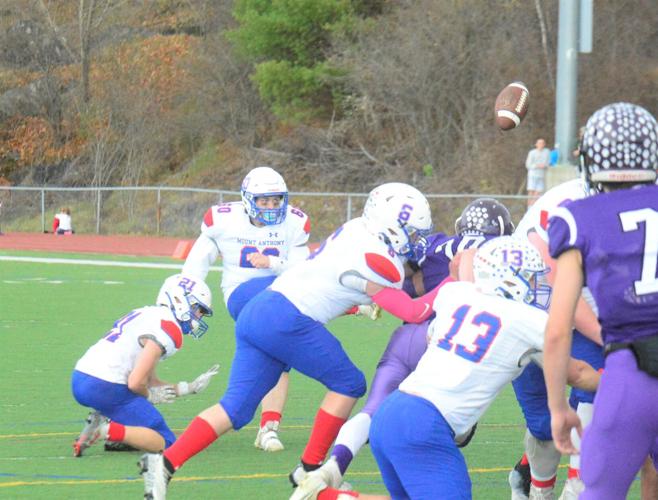 The football sails through the air after Luke Bleau's field goal attempt in overtime of Saturday's Division II championship game.

The football sails through the air after Luke Bleau's field goal attempt in overtime of Saturday's Division II championship game.

Luke Bleau wasn’t going to play a sport this fall. On Nov. 12, the Mount Anthony senior kicker found himself responsible for extending the Patriots’ championship aspirations not once, but twice against Bellows Fall with clutch kicks in the Division II state championship game.

With 3:02 remaining in the fourth quarter, Patriots quarterback Tanner Bushee plunged into the end zone on a 1-yard sneak, bringing MAU within a point, 14-13. Bleau trotted out with the rest of the MAU field goal unit and drilled the extra point through the middle of the uprights to even the score, eventually sending the game into overtime.

After Bellows Falls’ Jamison Nystrom connected on a 23-yard field goal to start overtime putting BF ahead 17-14, the Patriots needed the equalizer. On fourth down, Bleau once again came onto the field, needing to make his 24-yard field goal or the Patriots’ championship dreams were over.

Terriers coach Bob Lockerby elected to ice the kicker, calling his timeout and making Bleau think about the do-or-die moment a little longer before his attempt.

Turns out, Bleau has ice in his veins. He calmly took his steps and once holder Carter Thompson put the ball down Bleau connected again, sending the game into double overtime with his clutch kick.

Bleau said he focused on the fundamentals in that situation, and kept a clear mindset.

“I kind of keep my head down and follow through. I don’t really think,” he said. “I just go out there and kick the ball. If I think about it, I know I’m probably going to shank it.”

Bleau kept his head down and the rest was history. MAU scored again in the second OT and stopped BF inches short of the goal line on fourth down to clinch the program’s first state championship since 1994.

Bleau was perfect on the day, converting all three of his extra points and his lone field goal attempt. Not bad for a kid who had only been kicking a football for 7 weeks at that point.

Bleau’s friend Gavin Schnoop, a running back and linebacker for the Patriots, convinced him to join the football team for their senior year. After a couple weeks of practicing with the offensive and defensive line, Bleau felt his biggest impact could come in a different area of the game: special teams.

Bleau played soccer for 11 years in his hometown of Sheffield, Massachusetts before moving to the area his sophomore year. The senior wanted to give kicking a try, and approached the MAU coaching staff asking to give him a chance.

Fittingly enough, his first action came against Bellows Falls in Week 3, where he converted one of his two extra point attempts.

Don’t let the soccer background fool you, though. Kicking a football is a completely different world, and it required a lot of dedication for Bleau to earn the starting kicking spot from senior captain and two-way starter Josh Worthington.

“Late nights out there on the field with flashlights, headlights, kicking just to give me a shot,” Bleau said.

That work began to show itself as the year wore on. After going just 15/23 on extra point attempts in the regular season, Bleau made 15 of his 16 point-after chances in the playoffs, including a perfect 7-for-7 in the quarterfinal win over North Country. He saved his best performance for last, helping secure MAU’s third state championship in school history.