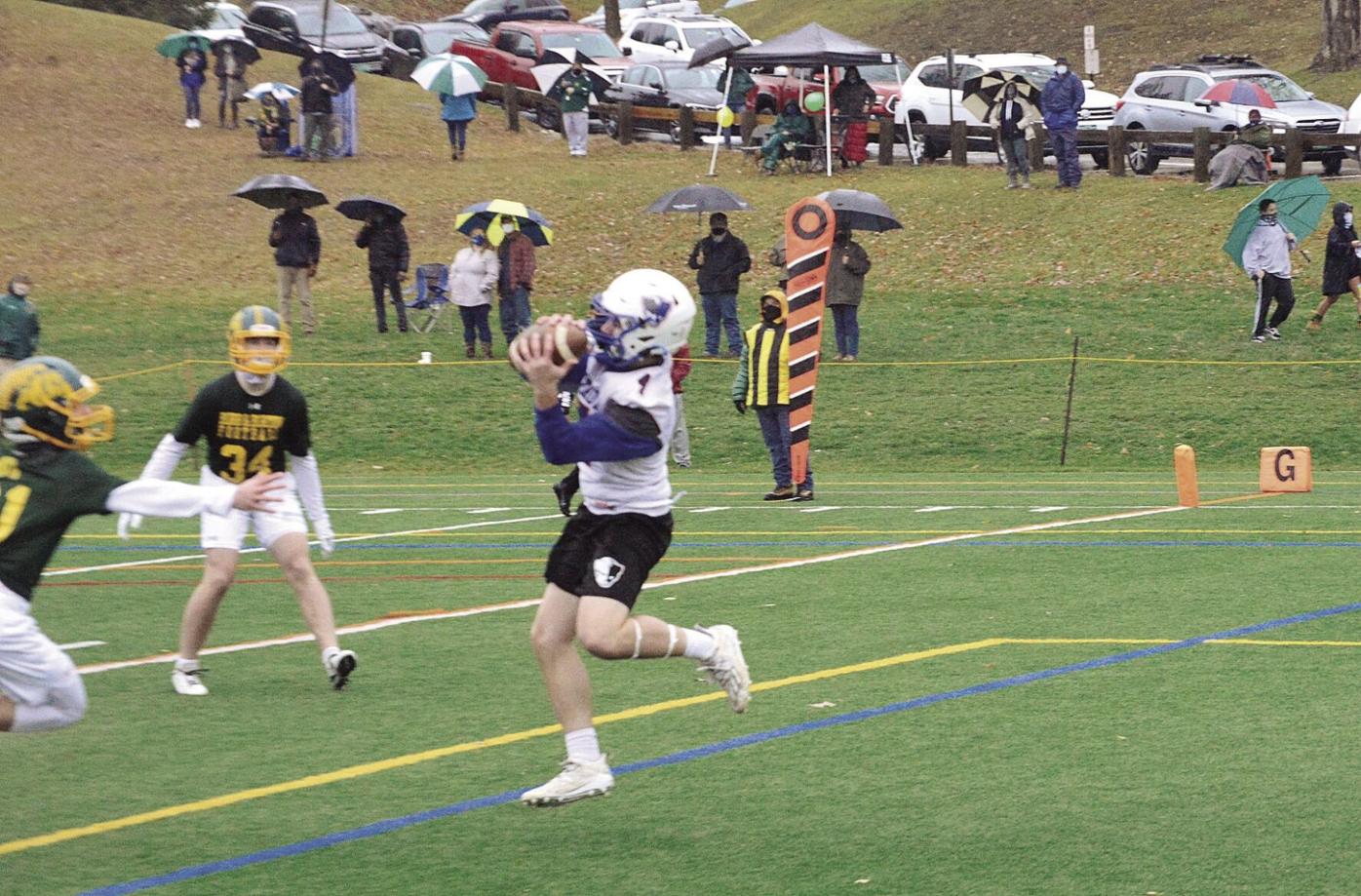 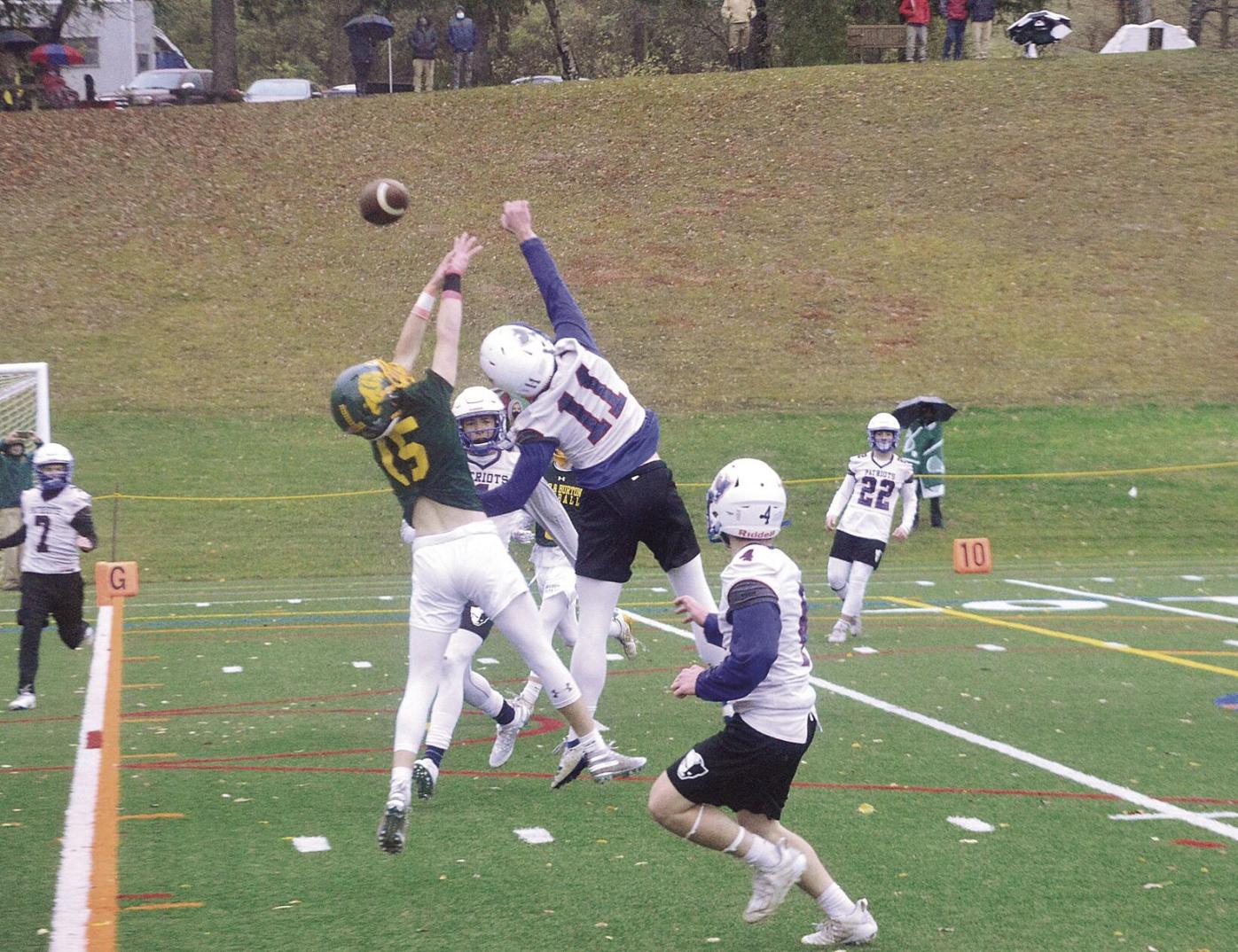 MANCHESTER — Gavin Johnson is one of the leaders for the Mount Anthony football team, and in the team's biggest game of the year he showed everyone why.

Johnson jumped in front of a Burr and Burton receiver from his safety position with 40 seconds left in a tie game. The Patriots playmaker hauled in the interception and instantly made a move to the sideline. Johnson sprinted 60-plus yards down the sideline and into the end zone giving Mount Anthony their first lead of the game with just 23 seconds left to play in the regional quarterfinal.

The interception proved to be the game-winner, as MAU defeated BBA 21-14 on Thursday night.

"I saw their quarterback look at me, and I looked at him and said 'this is mine,'" Johnson said.

Johnson only had one thing on his mind once he secured the interception.

"Score it. Score, score score, no matter what it takes," Johnson said. "Being a senior and a captain, I got to take the leadership."

"He's hands down one of the best players in the state," MAU coach Chad Gordon said of Johnson. "He shows what he can do anytime he gets his hand on the ball. It was a great play, clutch play."

These two teams met just eight days prior on the same exact field, and the result couldn't have been more different. BBA won 56-0 in a blowout fashion.

"They were insulted, that attacks their pride a little bit" Gordon said of last week's loss. "These guys grew up and got a great win."

Burr and Burton received the opening possession and drove it all the way down the field for a score. James Tudor was on the receiving end, giving BBA a 7-0 advantage early on.

The Bulldogs didn't waste much time extending their lead. MAU turned it over on downs during their first offensive possession. BBA responded by once again driving down the field and finding the end zone. This time, Dustin Joseph hauled in the touchdown grab on a fourth and goal from the seven yard-line.

That marked a 70-0 advantage for BBA through four and a half quarters of play. It would have been easy for MAU to start doubting themselves and let the game get away from them. The Patriots didn't let that happen.

"We've really been working on grit and resilience," Gordon said. "They showed grit today, twice in the last week we've come back from 14 to nothing."

BBA trailed 14-0 in their last regular season game of the season on Oct. 23 at Brattleboro before battling back and winning 34-31.

The Patriots defense did not allow a score for the reminder of the game, and their offense began clicking.

The MAU big skills started a drive toward the end of the first quarter, getting the ball into BBA territory. The second quarter began and Caleb Hay found Jack Ware on a fourth and goal for the score, making it a 14-7 game.

Ware had a big impact in this game, as he also intercepted a BBA pass just a few plays later setting up MAU in great field position.

With 6:36 left to play in the fourth quarter and BBA still ahead 14-7, the Patriots went for it on fourth and short. The pass fell incomplete as a MAU receiver ran a slant that fell to the ground. A flag flew onto the field though, and BBA was called for pass interference, extending the MAU drive.

Just a few minutes later, Hay threw his second passing touchdown of the game on a touch pass to the corner of the end zone to Austin Grogan with 2:31 left on the clock. Hay, who also served as kicker, hit the extra point to tie the game at 14-14.

Both teams had to battle the elements on Thursday, as rainfall made it difficult to handle the football at times. Both teams dropped their fair share of catchable passes.

This was the third meeting between BBA and MAU in as many weeks. Along with the Oct. 23 meeting, the two schools faced off on Oct. 8 in Bennington. That game was also won 21-14 by MAU.

The Patriots now move on to the Rutland regional semifinals, where they will host Fair Haven on Friday at 5 p.m.