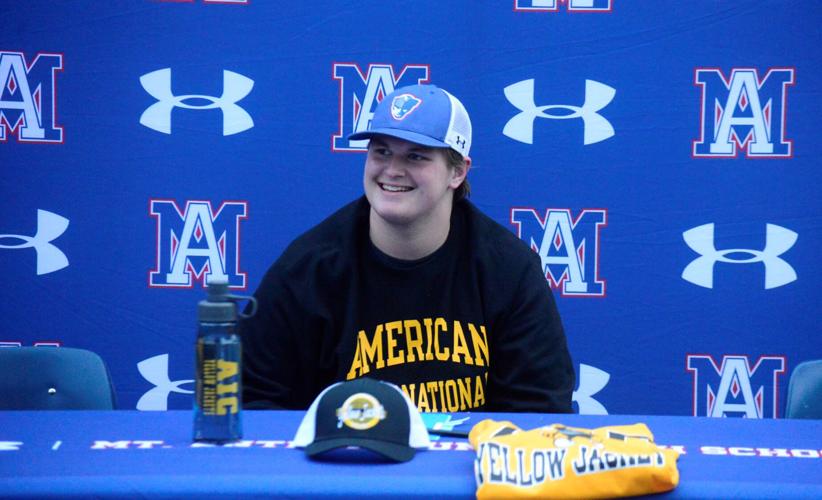 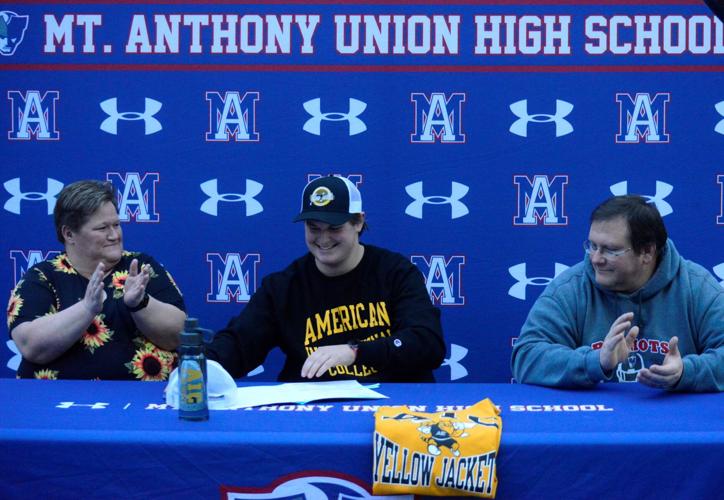 Lisa and Frank Gaudette cheer on their son Hayden as he signs his NLI on Nov. 11, 2021 at Mount Anthony.

Lisa and Frank Gaudette cheer on their son Hayden as he signs his NLI on Nov. 11, 2021 at Mount Anthony.

BENNINGTON — Mount Anthony’s Hayden Gaudette is a two-time individual state champion on the wrestling mat. He’s also a two-way starter and instrumental part of the Mount Anthony football team that finds itself competing for a state championship on Saturday.

It’s the senior’s third sport, however, that he’ll continue on to play at the next level.

Seated in the MAU courtyard with his parents on either side of him and football teammates there looking on, Gaudette signed his National Letter of Intent (NLI) to play college lacrosse at Division II American International College in Springfield, Mass.

Gaudette has been a standout goalie for the Patriots over the past several seasons. Finalizing his college decision is a day he had been looking forward to.

“It’s a great feeling, playing at the next level,” Gaudette said. “My family’s had my back.”

MAU athletic director Ashley Hoyt praised Gaudette for his work ethic prior to the signing.

“I knew this day would come the first time I met Hayden,” she said.

Despite his success in all three sports, Gaudette said he has always felt most comfortable protecting the net.

“I’m just a better athlete at lacrosse than I am at wrestling.”

It was around seventh grade that Gaudette knew his goal of playing college lacrosse was a reality. Gaudette was a member of Team New England that spring, and was a standout during a national tournament in Delaware.

The MAU senior had interest from several schools. What makes AIC a good fit?

“The team; it’s a family based team and it’s a good group of guys,” Gaudette said. “I can see myself fitting in.”

Gaudette certainly values family. Look no further than his dad, Frank, who is an assistant coach in both football and wrestling, and the head coach of MAU varsity lacrosse.

“It’s a good feeling to have him have my back on the sidelines during the game,” Hayden said.

The Gaudettes have experienced a lot of success with Frank on the sidelines and Hayden repping the Patriots jerseys. It’s something Hayden doesn’t take for granted.

“My experience here (at Mount Anthony) has been great,” Hayden said. “We’re finally making a championship run for football, which is great. It hasn’t happened in a long time. Wrestling we’re gonna make another run, hopefully top (it) off with three state titles, and we have a good chance to win (the lacrosse) states, too. We’re returning everybody.”

It’s not quite time for Hayden to trade in his Patriots blue for the Yellow Jackets’ black and gold, but when that day comes, expect the Gaudettes to make the 89 mile drive to Springfield often.

“We’ll probably go to most of the games,” said Hayden’s mom, Lisa. “My fingers are crossed.”

It was a year full of touchdowns, tackles, pins and saves for the 2022 Vermont News & Media male athlete of the year. He excelled on the g…