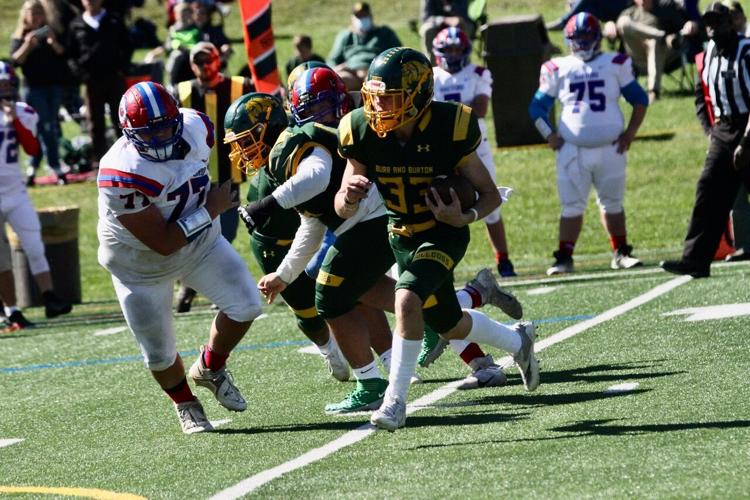 Burr and Burton running back Michael Crabtree runs the ball during a 24-14 win over Hartford. 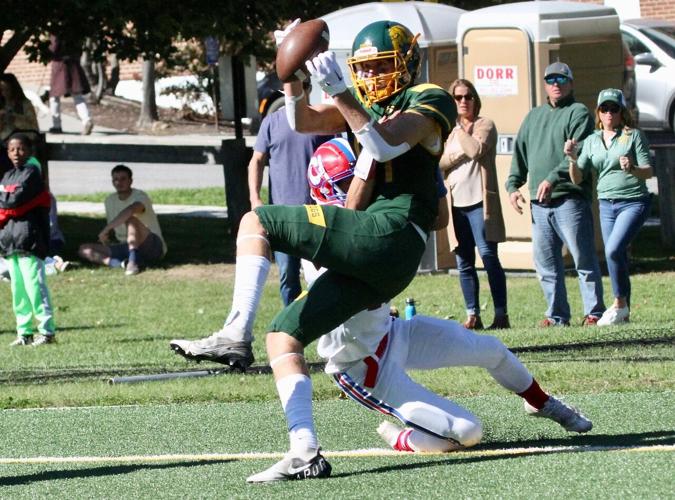 Burr and Burton receiver Trevor Greene hauls in a catch during Week 4's win over Hartford. 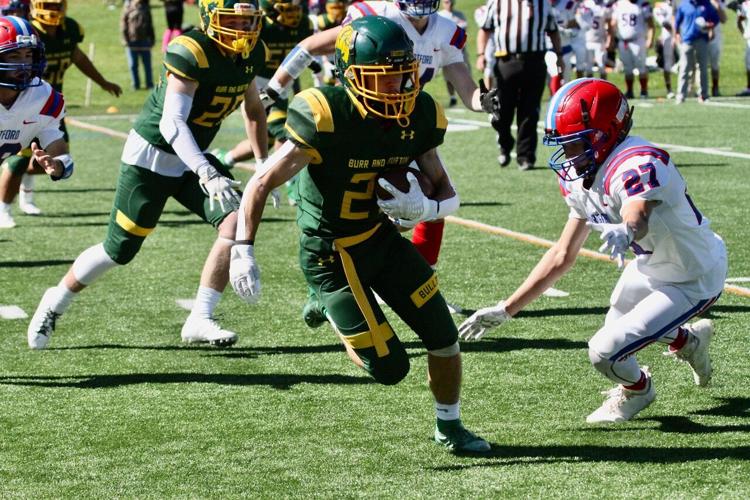 Burr and Burton running back Michael Crabtree runs the ball during a 24-14 win over Hartford.

The Bulldogs are one of four undefeated teams prior to Week 5 kicking off. Facing a grueling Division I schedule week in and week out, they have shown the ability to win in a multitude of ways, a key component for any successful team. They sit atop Division I with a QPR (Quality Point Ratings) of 6.25, ahead of second place Champlain Valley (5.429).

Week 1 was a slugfest of sorts as BBA hosted Burlington/South Burlington. Coming off their worst season under coach Tom McCoy in 2021, the Bulldogs got their confidence back with a 27-12 victory.

Their belief wasn’t the only thing to return to Manchester that day, as starting running back Michael Crabtree made his way back onto the field after missing the 2021 season with a broken leg.

Crabtree led the BBA offense with 118 yards on the ground on 22 touches, accounting for three of BBA’s four scores in the win. The senior running back was a focal point in an offense content to drain much of the clock in the first half, possessing the football for all but three minutes and 16 seconds of the first half. The domination in time of possession helped BBA jump out to a 21-6 lead by halftime.

Crabtree has been a constant in the Bulldogs offense through four games, stacking up 454 rushing yards and 11 total touchdowns. He’s had at least two scores in all four games, and has nine scores on the ground, one receiving touchdown and even threw a TD pass in BBA’s Week 4 win over Hartford.

It’s been a one-two punch for the BBA offense so far, with quarterback Jack McCoy being the other part of the equation. McCoy has thrown for 721 yards and has tallied eight scores through the air, adding 195 additional yards on the ground and one rushing TD through four weeks.

His best performance so far was Week 2’s 42-0 blowout win against BFA St. Albans, where the BBA signal caller passed for 258 yards and two TDs and added 63 rushing yards and a score on the ground.

Receiver Nate Smilko also had his best performance in the win, totaling 131 receiving yards on just three catches, including a TD. Smilko is a big-play threat every time the football is in his hands.

The Bulldogs defense has been stout to start the year, allowing no more than two scores in any game.

The BFA shutout has been the best the group has looked this fall. James Tudor got to the Bobwhites quarterback for a pair of sacks, and McCoy added an interception to his already impressive stat line.

The Bulldogs are holding their opposition to 10 points per game at the halfway point of the season. If they can maintain that sort of performance, they’ll be a tough game against anyone in the state.

Week 3 had the appearance of a measuring stick game, with the Bulldogs traveling to Rutland. Instead, BBA won convincingly, 49-14. Again a combination of McCoy, Crabtree and Smilko proved too much to handle for the Rutland defense.

On the other side of the ball BBA linebacker JT Wright was around the football all game, finishing with 14 tackles.

Week 4’s win over Hartford is the toughest battle to date for the Bulldogs, winning 24-14 at home.

Wide receiver Trevor Greene shined in the win, as McCoy found him on a pair of touchdown passes. Greene finished the game with three catches for 78 yards.

It’s not just BBA’s offense and defense that has impressed so far. BBA also has one of the best kickers in the state in Sebastian Dostal.

He flashed his range in Week 4, hitting a 38-yard field goal.

Friday night offered another tough test for the Bulldogs, who hit the road to take on the 2-2 St. Johnsbury Hilltoppers.

Burr and Burton runs past Seawolves in week 1

MANCHESTER — From the opening whistle, Burr and Burton football left no doubt about who was …

Burr and Burton unstoppable in 42-0 shutout of BFA St. Albans

MANCHESTER — Any football coach will tell you that there’s no such thing as a perfect game, …

MANCHESTER — It wasn’t as pretty as it’s been in Burr and Burton’s recent dominant wins, but…