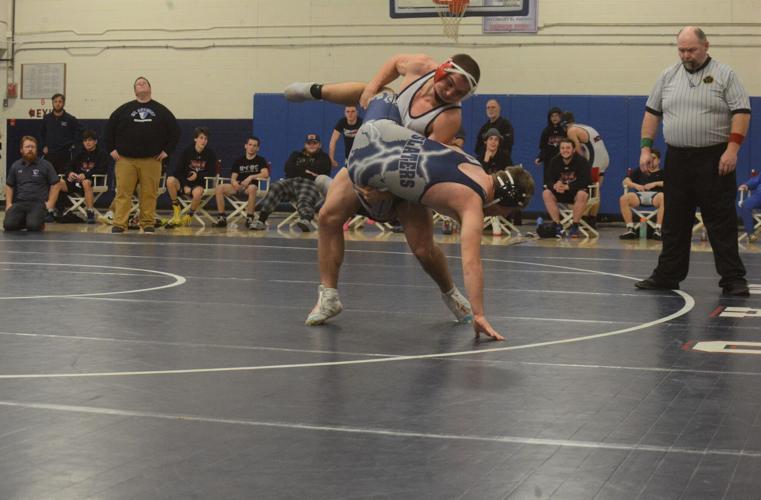 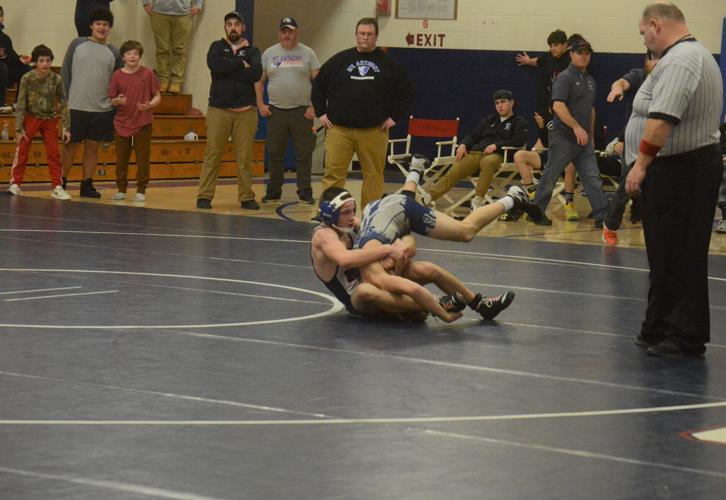 BENNINGTON — Alex Perez set the tone from the opening match of Tuesday’s quad meet inside Kates Gym Tuesday night. The Patriots’ 126-pounder faced off against Fair Haven’s Trey Lee for a third time this season, with both wrestlers notching a victory against one another in the previous two meetings.

Lee grabbed a 2-0 advantage early and appeared set to take that lead into round 2, but Perez had different ideas. The MAU grappler escaped from the bottom on a restart with just 9.8 seconds remaining in the round, getting away from Lee with a spin and flipping position to earn 2 points, evening the match as the first round buzzer sounded.

That momentum carried over into the second round, as Perez secured a takedown in the final seconds to take his first lead of the match, 4-3 heading into the final two minutes.

The MAU wrestler wouldn’t need the full two minutes, as he pinned Lee with 49.6 seconds remaining to gain a valuable win.

“That’s huge for the state seedings, in case they don’t see each other again,” said MAU coach Frank Gaudette. “They’ll probably see each other again this weekend. It just goes to show the competition that we’re wrestling. It’s starting to sharpen things up.”

Perez’s pin added a level of dominance to a near perfect night for MAU, who defeated Burr and Burton and Mill River 84-0, and bested Fair Haven 78-0.

It wasn’t the only reversal of the match, as Carson Herzfeld avenged a loss to Fair Haven’s Colton Delong earlier this season. Delong pinned Herzfeld in the Slater Duals on Dec. 31, but this time the MAU 220-pounder went the distance and edged out an impressive 1-0 victory over the Slaters grappler.

In 182-pound action, Ryan Marsden picked up an impressive win over Burr and Burton’s JT Wright. After a scoreless opening round, Marsden scored two takedowns on the regionally ranked Wright, who also managed one escape to make it 4-1 Marsden heading into the final round.

Wright scored another escape early in the final round before Marsden secured a pin with 38.3 seconds remaining in the match.

The MAU coach said Aaron Johnson, who picked up his 100th career win Monday, asked to wrestle up to face Wright.

“No, we need that one for the state tournament,” Gaudette replied.

Johnson, wrestling at his normal 170 spot, secured a pin in his lone match of the night against Fair Haven.

The Patriots return to action Saturday at Vergennes.