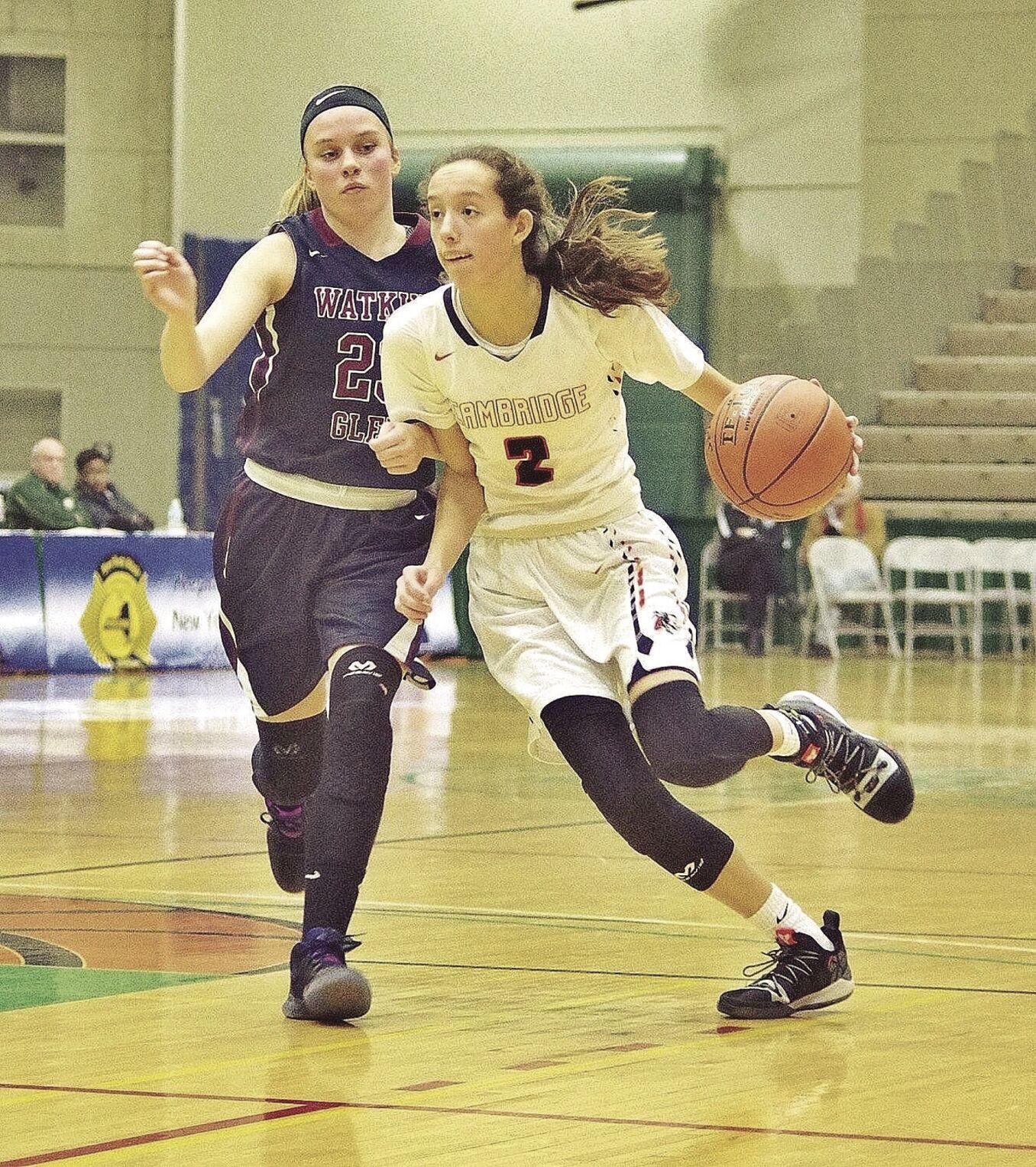 Cambridge’s Sophie Phillips drives to the basket with a defender on her hip. 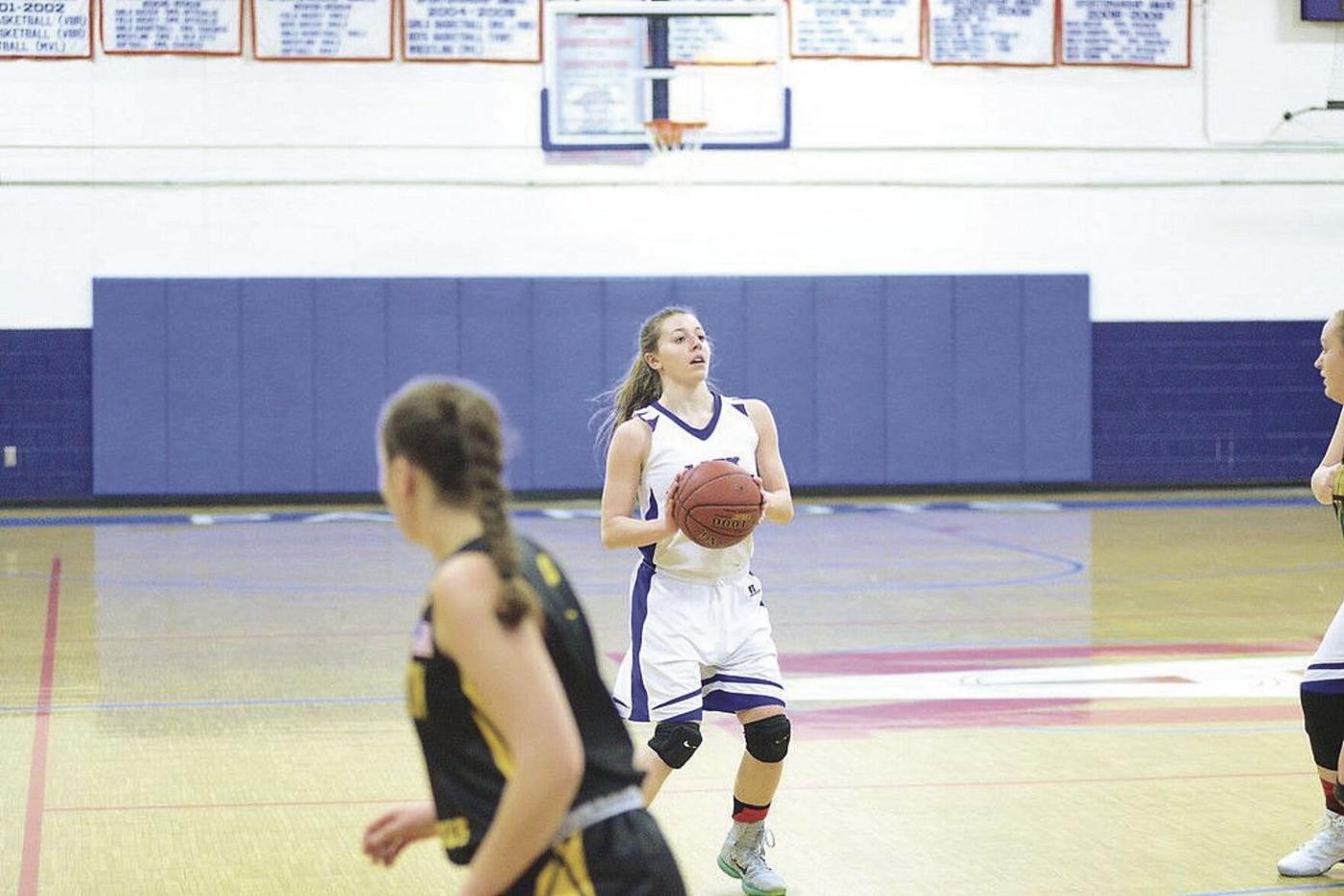 Cambridge’s Sophie Phillips drives to the basket with a defender on her hip.

Two of the strongest local girls basketball teams of the 2010’s were the 2016-17 Mount Anthony team and the 2019-20 Cambridge squad. Both teams enjoyed a strong playoff run led by ultra-talented rosters. So, who would take the title as the best team of the decade in a theoretical one-game matchup between the two schools?

First off, this game would be must-watch for local sports fans.

In reality, any of Cambridge’s past three seasons could be plugged into this matchup. Cambridge has enjoyed copious amounts of success over that stretch as Sophie and Lilly Phillips have taken the reins for the Indians. The sisters lead one of the most talented local girls basketball classes seen at one school. Taking the most recent season makes the most sense as many members of the team are part of the 2021 class, allowing each member the chance to progress on the court. Cambridge has claimed three consecutive sectional championships in New York, and were looking to defend its Class C state title before the coronavirus forced the cancellation of all state championship matches in March of last year.

Mount Anthony’s senior class in the 2017 campaign — led by leading scorers Madison Little and Brianna Legacy — provided the Patriots with a one-two punch that was tough to compete against. Little averaged more than 17 points per game while Legacy chipped in 12 a night herself.

Looking back, it appears that those in Bennington knew what they had going into that year. A coaching change brought in Dan Sleeman, who had been the boys basketball coach at MAU for the previous 15 years. It ended up being Sleeman’s only season with the MAU girls, and he coached them to a 18-5 record and a trip to the Division I semifinals. Don’t let the 5 losses fool you, three of them — including the semifinal loss — came against eventual champion Champlain Valley. CVU just happened to be on a nearly 100-game winning streak at the time, but the Patriots played them close in all three losses, even holding leads in the fourth quarter in two of those contests.

Don’t look too much into the records. They matter — of course — but it’s not the end-all in determining who would win this matchup.

To get a better idea of just how this game would go down, we must dive into a breakdown by position and play style.

One area that would favor MAU is its post play. The Patriots had a pair of nearly 6-footers at their disposal in Jordyn Burke and Anna Iannotti. Burke and Iannotti both played basketball in college, with Burke at Keene State and Iannotti at Castleton. The duo made life hard for opposing post players all season long. Add freshmen Grace Mahar into that mix, and MAU’s post play was a great secondary asset.

To put things into perspective, Mahar would later become a 1,000-point scorer for MAU, but she was also the best rebounder in the history of the program, all while playing the point. She displayed that during a game the following year where she pulled down a MAU-record 24 rebounds in a single game.

These post threats would make it extremely difficult for Cambridge in this matchup.

Fiona Mooney and McKayla McLenithan were the main low post players for Cambridge. Mooney, at 5-foot-9, provided a consistent third option for the Indians, while McLenithan showed flashes throughout the season, including in Cambridge’s sectional championship victory over Maple Hill where the Indians fed the ball inside a handful of times, and McLenithan was able to put points on the board with those post touches. With the height advantage and additional threat, though, MAU earns a slight advantage in the front-court matchup.

The backcourt for both teams is what made them both successful. I cannot stress how enjoyable it would have been to get the opportunity to watch the Phillips sisters battle it out with Little and Legacy.

On average, Sophie and Lilly contributed a combined 32.6 points a game for Cambridge, while the Little and Legacy duo combined for 29 a game.

Despite the small margin in point differential from both team’s top scorers, the way they got those points is significantly different.

The Phillips sisters consistently put up double digits night in and night out. Sophie scored 10 or more in 22 of Cambridge’s 23 games. Lilly reached double digits in 21 games. The only game they both failed to score 10 or more was Cambridge’s lone loss that season to Mechanicville. Cambridge scored a season low 38 in that contest.

For the 2016-17 MAU girls, some nights it was Little’s night to lead the team offensively, others it was Legacy’s. The duo didn’t consistently score double digits like Cambridge’s one-two punch.

During a rigorous Division I regular season, Little was able to put up double digit points in 21 games for MAU, Legacy had 12 such games. Legacy put up a team-high 26 points in two games that year. When she had it going, the senior guard made it very difficult on opposing defenders.

Sleeman called his backcourt combination of Little and Legacy “interchangeable.”

Both teams finished the season with an impressive win total despite playing a tough schedule.

MAU’s resume included early season wins over perennial Massachusetts contenders Wahconah and Pittsfield, both ranked in the top 20 in Western Mass by Masslive at the time.

MAU’s second loss of the season came against Rice, a team that featured a 6 foot-5 center, a rarity in girls basketball across the state.

The lone “bad loss” of the season for the Patriots came against rival Brattleboro, a team that had beaten a week prior.

Sleeden recalled that MAU was locked into a top four seed in the late-season matchup, and his team simply didn’t show up ready to play in the 47-42 loss at Brattleboro.

Other impressive wins for the Patriots included a three-point victory over a strong Hoosick Falls squad, and the team’s pair of playoff victories over Burlington and South Burlington, respectively.

Arguably its most impressive wins came during a mid-January tournament in Brooklyn that pitted the Class C school against a couple Class AA opponents.

Cambridge bested Baldwin 67-63 in a triple overtime thriller, a team ranked in the top 25 in the state in Class AA in its first game of the Rose Classic Super Jam tournament at Canarsie High School.

The Indians parlayed that win with a championship victory over Brooklyn-based Xaverian.

Those two wins show that Cambridge can not only hang with its normal competition of Wasaren League opponents, but against anybody in the state of New York.

Both team’s defenses caused long nights for their opponents. MAU had a game where it registered 20 steals. Sleeman attributed that to the length of the team, as well as applying a “soft” three-quarter court press. Cambridge also likes to make its opponents uncomfortable bringing the ball up the court, and have multiple full-court and other presses they use, too.

Cambridge forced Maple Hill to turn the 19 times in the first half alone in the school’s sectional final matchup.

Both MAU and Cambridge’s high-scoring offenses fed off the scoring opportunities in transition thanks to those turnovers.

With MAU holding the advantage in the paint, and an edge in guard play for Cambridge, this matchup would likely come down to which team got more contributions from its bench.

Insert Cambridge’s Stasia Epler. Epler has experience both coming off the bench and starting for the Indians. She gives the Cambridge team another lethal offensive weapon, who can quickly put points on the board as a threat from distance. She averaged more than 8 points a game during the 2019-2020 season, including a season-high 19 against Berne-Knox. Her presence would likely cause Cambridge to be the slight favorite.

The matchup would ideally be played in New York state, with a shot clock in place. Quicker possessions is something both teams could take advantage of.

My official prediction is Cambridge wins this battle, 67-62, over the Patriots.