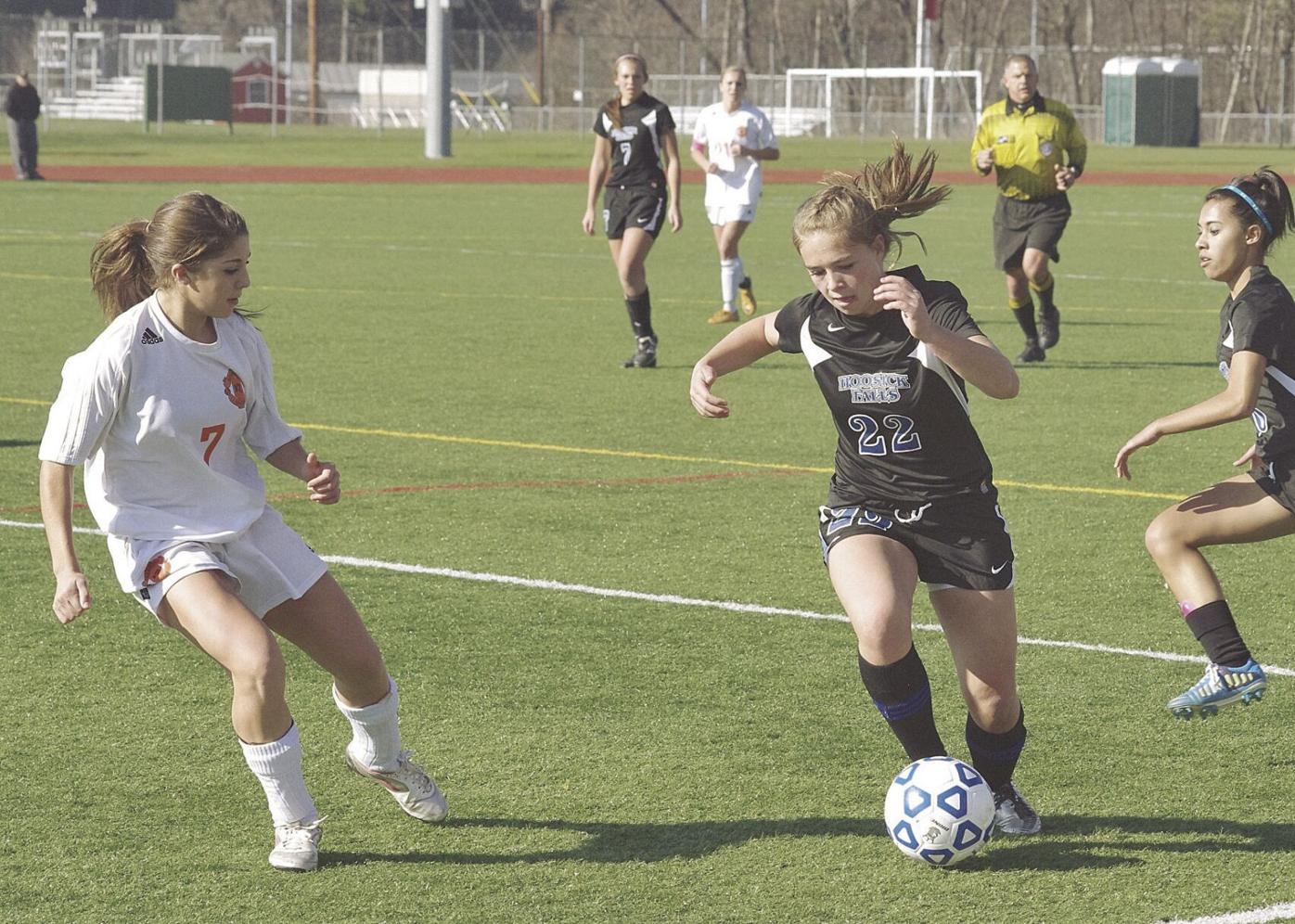 Jordan Haynes was a profilic scorer for the Hoosick Falls girls soccer team, ending her career as the school’s all-time leading scorer. 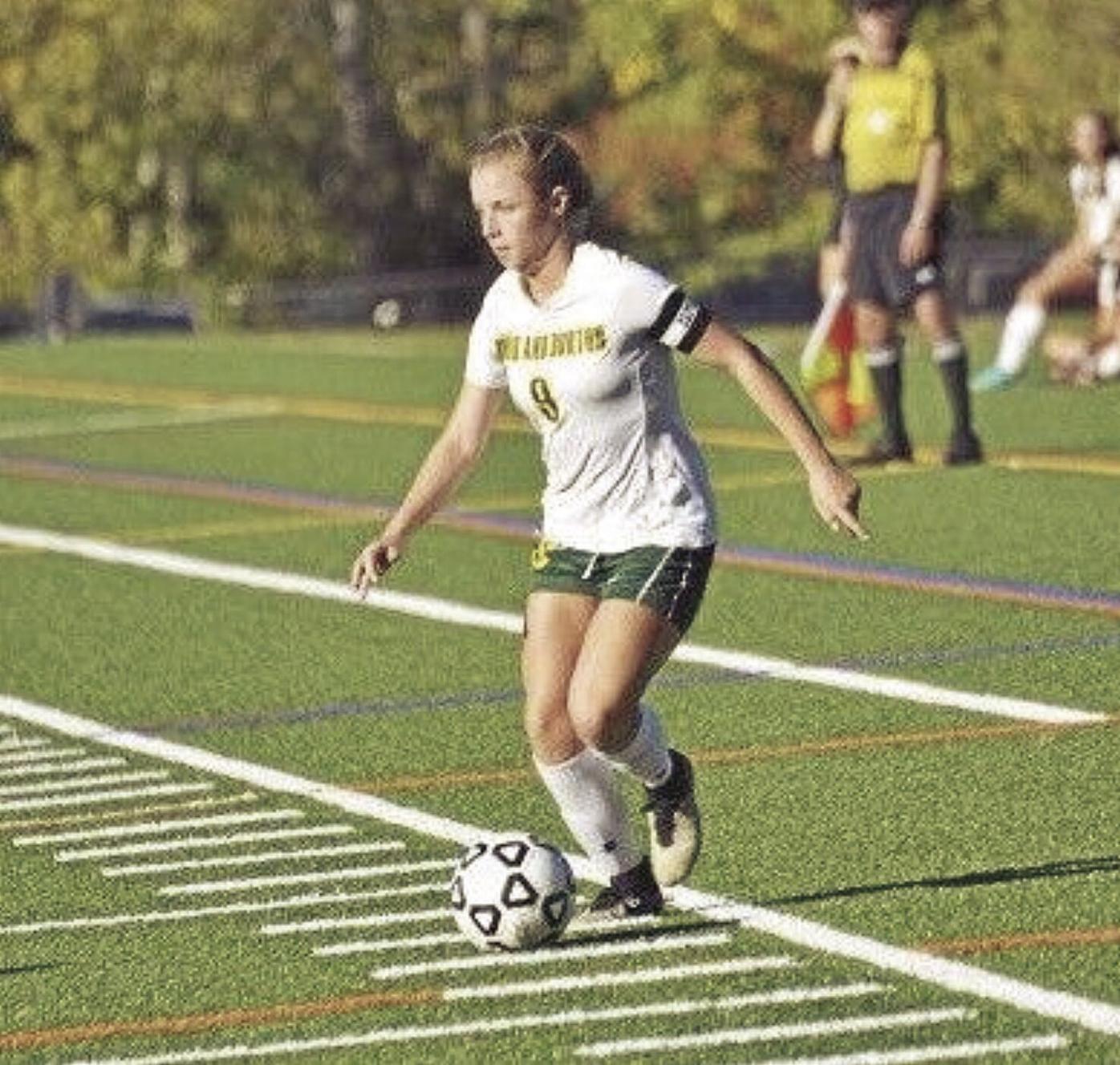 Una Langran was a captain for the 2016 Burr and Burton girls soccer team. 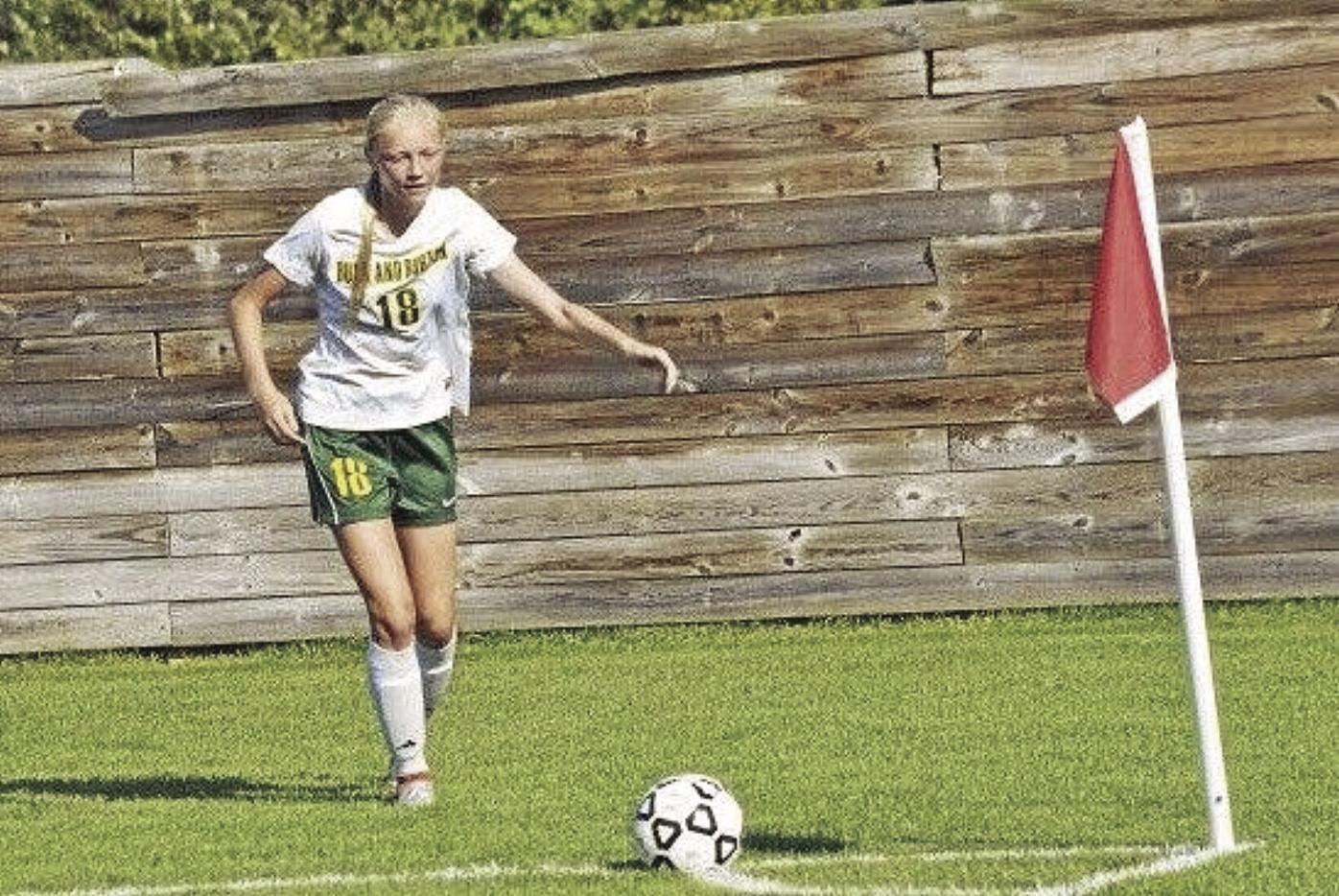 Sky Woodard was a key piece to the 2016 Division I soccer champions for Burr and Burton. 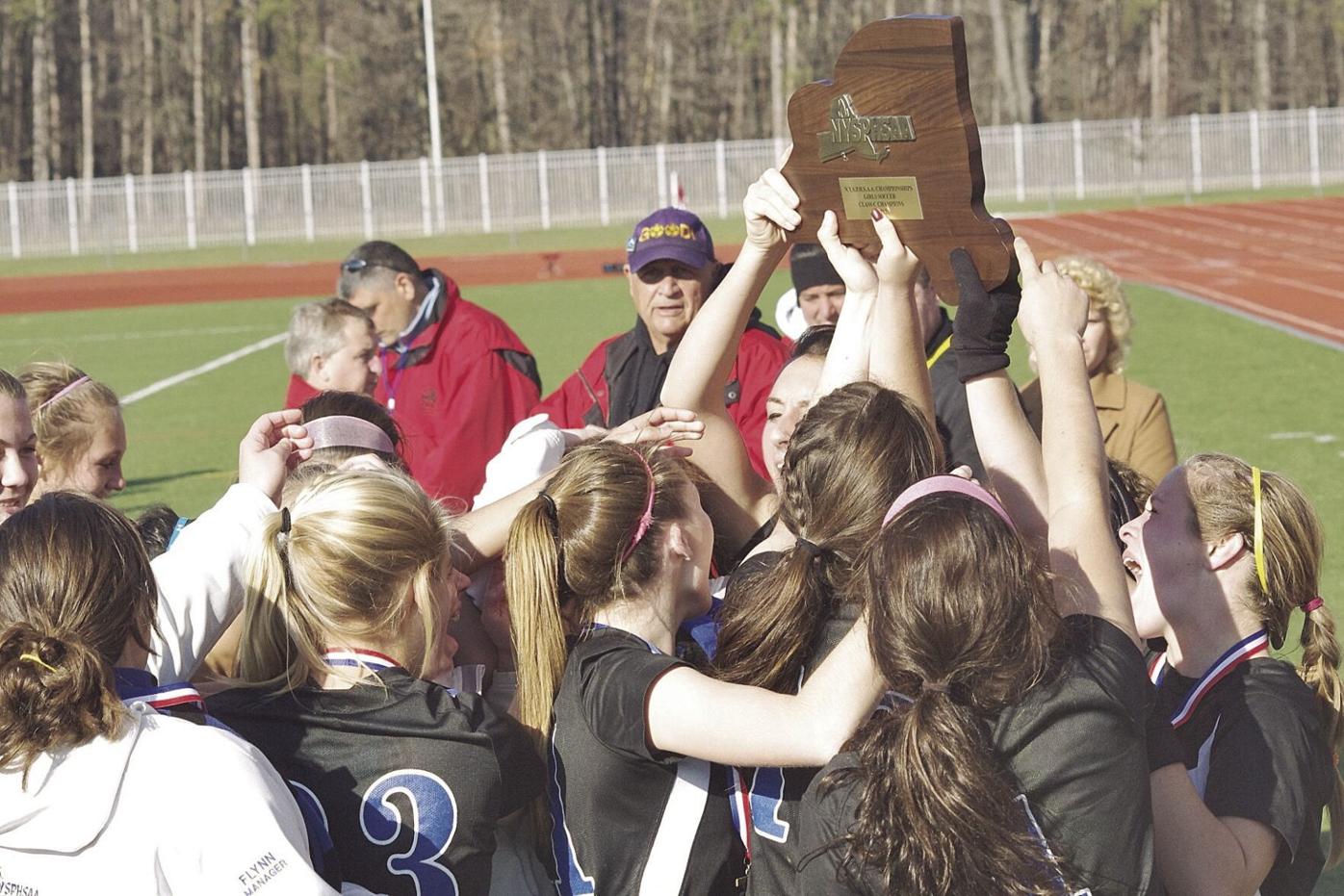 Jordan Haynes was a profilic scorer for the Hoosick Falls girls soccer team, ending her career as the school’s all-time leading scorer.

Una Langran was a captain for the 2016 Burr and Burton girls soccer team.

Sky Woodard was a key piece to the 2016 Division I soccer champions for Burr and Burton.

The 2012 Hoosick Falls and 2016 Burr and Burton girls soccer teams both had a storybook-like ending to its state championship winning seasons.

The Bulldogs and Panthers both offered prolific goal scorers, tenacious defenders and rock-solid goalie play. That combination is the recipe for success in soccer, and both ultra-talented teams enjoyed lots of success in their respective seasons.

Who would come out victorious if these two teams stepped on the pitch against each other?

Hoosick Falls was coming off a 2011 state championship, and returning nine starters and nine seniors for the 2012 repeat where the team went 20-2 to claim the title once again.

The Panthers brought back reigning New York player of the year Alice Hayden, a defender for Hoosick Falls. Grace Delurey was another key returning piece, coming off an 18 goal, 11 assist season as a junior.

Delurey evolved to another level her senior season, leading the Panthers with 29 goals and 24 assists, earning the New York state Player of The Year. Delurey was seemingly unstoppable for the Panthers all year long.

Freshman attacker Jordan Haynes was entering her third year on varsity. Haynes led the team with a 33-goal season as a freshman in 2016. Starting goalie Hannah Fricke was also back for the Panthers, holding opponents to nine scores throughout the entire season.

All these girls had to take on an expanded role after Maritza Gonzalez and Meg McKee, the program’s all-time leading scorer at the time, graduated after the 2011 title.

The talent for Hoosick Falls was clear.

As for the 2016 Bulldogs, the season prior didn’t leave them as content.

BBA was 17-0 heading into its championship matchup with CVU in the 2015 Division I final, where the Bulldogs ultimately fell 2-1.

“The loss in the championship game last season was a learning experience for us and I think that loss has really motivated our girls to work hard to help us get over that hurdle this season,” said BBA coach Suzanne Mears during the 2016 preseason. “I have a really committed bunch of girls coming back this season and with the strong team we have I feel we can pick up where we left off last season.”

Mears was spot on, as BBA would finish the season 17-1 and Division I state champions for the first time in school history.

Much like Hoosick Falls, BBA returned many key players from the prior season.

Hannah Pinkus and Georgia Lord were a dynamic duo in the midfield with previous varsity experience. Maggie Sullivan was another returning scoring threat for the Bulldogs.

Emily Bleakie was a key defensive piece, as were the two goalies Ana Garay and Samantha Cintron. Cintron would pitch three shutouts in BBA’s playoff run.

The Bulldogs got a unique addition to the 2016 team in the form of two transfers from Rutland. Sky and Brooke Woodard joined the Bulldogs, adding a couple more goal-scorers to an already talented team.

Brooke would tally a team-leading 15 goals in her lone season with BBA, while Sky found the back of the net five times.

Grace Pinkus found her groove late in her freshman season, leading the team with three postseason scores and totaling 10 on the season.

Hoosick Falls found themselves ahead early and often through many of their games. The talent the Panthers possessed overwhelmed most of their opponents. Hoosick Falls outscored its opponents by a staggering 117-9 margin throughout the season.

It would be easy to look at those numbers and think the Panthers had an easy schedule that year, but that just wasn’t the case.

Look at the Hoosick Falls playoff run, where they scored 33 goals and only allowed a single goal through the five game title run.

BBA found themselves in a 0-0 battle with No. 2 Colchester in the second overtime of the Division I title match.

With 2:07 left to play in the second overtime, Sky Woodard delivered a perfect corner kick into the Colchester box where Grace Pinkus jumped over two Laker defenders and headed in the game winning goal.

With the header, Pinkus gave BBA its first ever Division I state championship title, regardless of sport.

“Scoring the game-winning goal to win a state championship is an amazing feeling and couldn’t ask for a better group of girls to win it with,” Pinkus said after the game.

Pinkus tallied 65 goals for BBA during her four-year career, though none more memorable than that.

A season that almost never was

Hoosick Falls didn’t find themselves in as much of a nail-biter to secure its title, though the journey the Panthers embarked on was just as memorable.

Husser was diagnosed with prostate cancer prior to the 2012 soccer season. He decided surgery was his best option.

“I said, ‘You know, I’ve got this thing next week. It’s going to sound weird but I coach a high school soccer team,’” Husser recalled. “‘I’d read up on it a little bit and if this is a slow-growing cancer, if you tell me we’ve got to do this two weeks from now, let’s go. But if I could wait until the end of the season.’”

“My wife goes, ‘He thinks he’s going to win the state championship. They did last year,’” Husser recalls.

The test results confirmed it would be possible to delay the surgery until after the soccer season, and the rest is history.

Husser wouldn’t miss a game, standing on the sidelines during the title run. He also didn’t tell the girls about his diagnosis until after they secured the state title.

As good as BBA’s defense was, it proved nearly impossible to keep Delurey and Haynes from finding the back of the net. Holding the duo to a goal apiece was an accomplishment.

Cintron did a great job keeping the ball out of the net for the Bulldogs, but I believe the Panthers would pepper the goal and Delurey, Haynes and Hayden would eventually find the back of the net.

Hayden would likely shadow Bulldogs’ leading scorer Brooke Woodard in this hypothetical matchup, leaving the door open for Grace Pinkus to find the back of the net.

Fricke was a wall for the Panthers, holding the opposition to nine goals in 22 games. Pinkus, now playing Division I soccer at the University of Massachusetts, always found a way to get on the board for BBA, which I think she does again here.

My final prediction is Hoosick Falls comes out victorious 3-1 over BBA in a talent-rich matchup.